Anterior hip dislocations are usually caused by forceful abduction with external rotation of the thigh and most commonly following a motor vehicle accident or fall. Enormous force is required to dislocate a hip as it is quite stable due to its bony construction and the associated muscular and ligamentous attachments. This activity describes the classification, evaluation, and management of anterior hip dislocations. It also affirms the role of an interprofessional team consisting of the nurse, emergency physician, and an orthopedic practitioner in reducing the dislocation swiftly without surgery, and hence decreasing morbidity in patients with anterior hip dislocation.

Hip dislocations after trauma are frequently encountered in the emergency setting. A significant force is generally required to dislocate a hip as this ball and socket joint is quite stable due to its bony structure and the associated muscular and ligamentous attachments. Due to the required force, hip dislocations often are associated with other significant injuries; for example, fractures are found in over 50% of these patients. The majority of all hip dislocations are due to motor vehicle accidents. Posterior hip dislocations are the most common type, with anterior occurring only about 10% of the time. These injuries are true orthopedic emergencies and should be reduced expediently. The majority will resolve with a closed reduction in the emergency department.[1][2][3]

Anterior hip dislocations are usually the result of a significant force, such as trauma, or from a poorly positioned total hip arthroplasty. In a traumatic setting, the hip is forced into abduction with external rotation of the thigh and often related to a motor vehicle accident or fall. There are three types of anterior hip dislocations: obturator, an inferior dislocation due to simultaneous abduction; hip flexion; and external rotation. Iliac and pubic dislocations are superior dislocations due to simultaneous abduction, hip extension, and external rotation.[4][5] Bourne et al. state that total hip arthroplasty has an overall dislocation rate of 0.3-10%, and increases to 28% in the revision setting. [6] Recent literature has shown that anterior total hip arthroplasty has near equivalent rates as the posterior approach. Increasing education in the anterior approach may lead to an overall increase in hips performed anteriorly and a subsequent increase in anterior hip dislocation and complications associated with the anterior approach.

Hip dislocations are most common in young adult males and are most often the result of motor vehicle accidents. A recent study suggested the average age of these patients to be 34.4, with over 90% male. Associated injuries were found in 74.4% of patients with the most common involving fractures of the hip. Over 90% were treated with a closed reduction, and approximately 70% were reduced within 12 hours. One study suggested an increase in long-term complications from 22% to 52% with a delay of over greater 12 hours. Anterior dislocations of the hip in children are rare.

Brennan et al. found that dislocation following total hip arthroplasty (THA) occurs in 3.8% of patients when followed for ten years. [7] The majority of anterior hip dislocations occur in the first month and is the most common reason for revision arthroplasty in the first two months. Many factors may predispose a patient to dislocate and include;[7]

This system includes both anterior and posterior dislocations and incorporated pre- and –post findings.

Patients with hip dislocations generally arrive in severe pain in the hip area; however, reports of pain in the knee, lower back, thigh, or even lower abdomen or pelvis are not uncommon. Superior anterior dislocations classically present with the hip extended and externally rotated while inferior anterior dislocations generally present with the hip abducted and externally rotated. It is important to note that additional bony leg injuries may alter this classic presentation.

A thorough neurovascular exam is also required. Injuries to the femoral artery, vein, or nerve may rarely occur with anterior dislocations and should also be sought out. Femoral nerve motor function may be difficult to assess fully due to pain and the nature of this injury; however, sensory deficits over the anteromedial aspect of the thigh and medial side of the leg and foot should raise suspicion. Sciatic nerve injuries occur more often with posterior dislocations; however, they should be ruled out in any hip dislocation or fracture.

Due to the required mechanism of injury related to these dislocations, a full trauma evaluation for other associated injuries should be considered.

Hip dislocations usually are obvious on standard AP (anteroposterior) images of the pelvis. However, complete imaging usually includes a cross-table lateral of the affected joint.

On a normal AP pelvis, the femoral heads should appear similar in size with symmetric joint spaces. The joint with an anterior dislocation will project a larger-appearing femoral head. A femoral neck fracture should be ruled out by this image prior to attempting reduction.

Judet views (45 degree internal and external oblique views) may be of some help in evaluating for bone fragments and occult acetabular and femoral head and neck fractures.

CT (Computed tomography) is recommended after a successful, closed hip reduction to evaluate for occult fractures. It may also further elucidate the cause of postreduction joint space widening and find intra-articular bone fragments or soft tissue injury that may prevent appropriate joint articulation. Moreta et al. found loose bodies in 20% of the hips that underwent post-reduction CT.[8]

CT also may be helpful in preoperative planning when a closed reduction is unable to be obtained and surgical, open reduction is required. Similar to postreduction joint space widening, findings on CT after unsuccessful reduction attempts may elucidate bone fragments or soft tissue abnormalities that both explain the inability to perform a closed reduction and assist in surgical planning.

MRI may be indicated to evaluate for soft tissue injuries and cartilaginous bodies that continue to cause issues after the acute period. Osteonecrosis also may be seen in the subacute period (4 to 8 weeks), and some have suggested that MRI is superior to CT for children with hip injuries as CT may miss unossified labrum and acetabular fractures.

Laboratory studies should be tailored to the individual patient; however, if significant blood loss is suspected due to femoral vessel injury, serial hemoglobin/hematocrit and a type and screen may be requested.

Prompt reduction of any hip dislocation is imperative. Attempts should be made to impart a reduction within six hours. However, the traditional rule of a concentric reduction within six hours has been challenged by many. Letournel and Judet found no significant difference in osteonecrosis when patients were reduced up to 72 hours. [9] These patients are usually in considerable discomfort. Initial analgesia should be given with thought to the possibility of other associated injuries.[1][10] Irreducible hip dislocations are often secondary to inadequate posterior or anterior wall support or entrapped structures. The labrum, ligamentum teres, capsule, iliopsoas, pulvinar, and synovium, were trapped in the joint and prevented close reduction.

Patients who do not warrant an open reduction should have an urgent closed reduction in the emergency department under procedural sedation.

The Allis Maneuver is the most common method performed and differs slightly from the Allis maneuver used for posterior hip reductions. The patient lies supine with the practitioner standing over them. An assistant stabilizes the pelvis by applying pressure over the bilateral anterior superior iliac spines. The practitioner holds the affected leg just below the knee and, while slightly flexing the hip, applies constant traction to the hip joint along the long axis. The hip may be internally rotated and adducted. A gentle lateral force to the thigh may be of some assistance. The reduction is performed until an audible click is heard, suggesting a successful reduction.

The patient is positioned supine with the hip partially flexed and abducted. A firm jerk is then applied to the thigh. Another variation has the practitioner apply traction longitudinally with hip adducted and apply abrupt internal rotation and extension of the hip

This technique also is less frequently used due to difficult patient positioning; however, it is often suggested to be a less traumatic process. The patient is placed in the prone position with the affected leg allowed to hang from the side of the bed; the knee and hip are flexed while an assistant stabilizes the patient's lower back. Traction is applied downward by the practitioner who is holding the leg just below the knee. This allows gravity to assist with the traction. Internal and external rotation are applied until a successful reduction is felt.

Patients should be positioned with legs immobilized in slight abduction with a pillow or device between the knees. Ice packs should be applied, and analgesia is required. The patient should have post-reduction x-rays done and admission for continued orthopedic care. It is critical to evaluate the stability of the hip when a patient suffers an anterior hip dislocation after total hip arthroplasty. The patient should be tested under anesthesia, and the degree of flexion, adduction, and internal rotation should be recorded. A hip abduction brace may benefit a patient who continues to disregard precautions.

Multiple surgical approaches for reducing an anterior hip joint are possible; however, all require joint irrigation to remove any bony or soft tissue structures that would prevent a concentric reduction. Postoperatively reduced hips should be held in traction for 6 to 8 weeks, until definitive fixation, or until the pain has entirely resolved.

Patients should be positioned with legs immobilized in slight abduction with a pillow or device between the knees. An abduction brace may be prescribed and is at the provider's discretion. A knee immobilizer offers additional support in the posterior hip dislocation but has no role in the anterior hip dislocation. The patient should have post-reduction x-rays and admission for continued orthopedic care.

Orthopedic surgery consultation should be requested after a successful emergency reduction or if there is an indication for emergent operative reduction (most commonly, the inability to reduce the dislocation). Trauma surgery also may be consulted if there are other non-bony injuries.

Anterior hip dislocations must be reduced expediently. Delays of more than 6 hours correlate with increased long-term morbidity, most notably osteonecrosis of the femoral head. Anterior hip dislocations without indications for surgical repair are generally reducible in the emergency department under procedural sedation using one of the multiple techniques. Postreduction orthopedic consult and admission are appropriate.

Hip dislocations after trauma are frequently encountered in the emergency setting. Significant force is generally required to dislocate a hip as this ball and socket joint is quite stable due to its bony structure and the associated muscular and ligamentous attachments. Due to the required force, hip dislocations often are associated with other significant injuries; for example, fractures are found in over 50% of these patients. The nurse practitioner and emergency department physician must consult immediately with an orthopedic surgeon. These injuries are true orthopedic emergencies and should be reduced expediently. The majority will resolve with a closed reduction in the emergency department. An interprofessional team consisting of the nurse, emergency physician, and an orthopedic surgeon can most often reduce the dislocation without operative intervention. 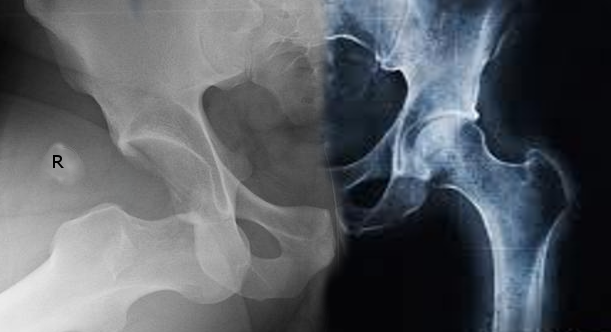