The diaphragm is composed of the central tendon, costal, sternal, and lumbar components, the lateral parts of which are a continuation of the oblique muscles. At rest, it sits near the fifth and sixth intercostal space, and incompletely separates the thoracic and abdominal cavities. Its central location, in addition to movement during respiration, renders it a potential target in both thoracic and abdominal trauma. This activity reviews the workup of diaphragm injury and describes the role of health professionals working together to manage this condition.

The diaphragm is composed of the central tendon, costal, sternal, and lumbar components, the lateral parts of which are a continuation of the oblique muscles. At rest, it sits near the fifth and sixth intercostal space, and incompletely separates the thoracic and abdominal cavities. Its central location, in addition to movement during respiration, renders it a potential target in both thoracic and abdominal trauma.[1][2][3]

In blunt traumas, diaphragmatic rupture is commonly a sequela of a sudden increase in intra-abdominal pressure. In stabbing or gunshot wounds, penetrating injuries to the diaphragm may often be undiagnosed and overlooked in the initial assessment.[4][5]

As an example, the patient may present shortly after the onset of penetrating traumas in the thoracoabdominal region. In the early stages, penetrating diaphragmatic injuries are usually asymptomatic and frequently masked by more immediately apparent injuries, requiring high degrees of suspicion on the part of the practitioner. As the diaphragm can shift upward or downward with respiration, the practitioner must consider potential diaphragm injuries with penetration from the fourth intercostal space down to the subcostal margin.

Blunt traumas, frequently following rapid deceleration injuries from motor vehicle accidents or fall from significant distances, are common causes of diaphragmatic ruptures. Forces sufficient to rupture the diaphragm can frequently lead to other more obvious injuries, including rib fractures, lung contusions, solid organ injuries, and lacerations, or hollow viscus injuries. In motor vehicle accidents, significant trauma to the chest and abdomen via the airbag or handlebar are sufficient to cause diaphragmatic rupture.

In cases of delayed presentation, patients may present with dyspnea, nausea, and emesis, with a remote history of motor vehicle collisions or other blunt trauma. Bowel sounds can, on occasion, be auscultated in the chest if there is sufficient herniation of viscera. Strangulation of bowel can present with dry heaves and obstipation with eventual sepsis and perforation.

As mentioned, diaphragm injuries secondary to blunt or penetrating traumas are frequently undiagnosed acutely. The absence of a hyperechoic, curvilinear line above of the liver or the spleen, detected by a FAST (Focal Assessment with Sonography for Trauma) examination during a trauma workup, may be the very first sign of a large diaphragm injury. More commonly, an upright plain film of the chest is often the best initial study, although it can miss up to 50% of all cases. A chest x-ray will frequently show elevated hemidiaphragm on the affected side, and visceral herniation can present as diffuse and loculated gas bubbles. This is often misdiagnosed as a pleural effusion or gas-forming empyema, and insufficient suspicion for diaphragmatic rupture can mislead the practitioner into placing a chest tube on the affected side. In severe cases, there may be herniation of other intraperitoneal structures into the affected side. A nasogastric tube can be placed to assist in making a diagnosis, and coiling of the NG tube into the chest on chest x-ray is diagnostic of a diaphragmatic rupture.  In less apparent cases, computed tomography (CT) of the chest and abdomen has higher sensitivity and specificity for diagnosing diaphragmatic rupture compared to a chest x-ray. Interruption of the diaphragm, herniation of abdominal viscera, constriction of abdominal viscera through the defect (the so-called "collar sign"), or free-floating diaphragmatic flaps are all signs concerning for diaphragm injuries.[2][7]

In cases where concern remains despite imaging, diagnostic laparoscopy under general anesthesia should be performed.  Alternatively, thoracoscopy performed for the evacuation of retained hemothorax can also be used to evaluate the ipsilateral hemidiaphragm. A 30 or 45-degree scope should be used to evaluate the entire hemidiaphragm for defects. Of note, the risk of tension pneumothorax during laparoscopy is a very valid concern in patients with a diaphragmatic defect, and the patient's vital signs and respiratory status should be carefully monitored during insufflation.

The defects are then graded on an I to V scale, developed by the American Association for the Surgery of Trauma in 1994 for the evaluation of thoracic, cardiac, lung, and diaphragm injury. Penetrating injuries tend to be low on the scale, involving mere contusions or lacerations less than 2 cm in length. Blunt trauma involving the diaphragm can often lead to greater defects with significant tissue loss.

In patients where diaphragmatic injuries are immediately diagnosed, an open laparotomy can facilitate reduction of any visceral herniation and repair of the defect. For patients who are hemodynamically stable and without other indications, laparoscopy is a reasonable alternative for diaphragm repair in a skilled surgeon's hand. The patient should be placed in the supine position, and the chest should also be prepared, and draped should the incision need to be extended. A nasogastric or orogastric tube, if not placed already, should be placed to decompress the stomach. The spleen, stomach, splenic flexure of the colon, and the left lobe of the liver should be adequately retracted inferomedially to facilitate complete visualization of the diaphragm. [8][9][10]The right lobe of the liver should be retracted inferomedially to expose the right hemidiaphragm. In some cases, the triangular ligaments and the falciform ligaments may have to be divided to facilitate visualization.  The entire abdomen is inspected, and any herniated visceral contents reduced. If there is any contamination due to spillage, the thoracic cavity should be copiously irrigated with antibiotics-infused normal saline until the clear fluids are suctioned. In the process, enlargement of the diaphragmatic defect may be required. An ipsilateral thoracostomy tube should be placed if there is a concern for remaining contamination or hemothorax. In a damage-control laparotomy, the defect should be covered with packed laparotomy pads and left to be repaired later.

Delayed diagnosis of diaphragmatic rupture, usually after visceral herniation through the diaphragm, should be treated with video-assisted thoracoscopic surgery (VATS) or a thoracotomy if warranted due to retraction of the diaphragm and the extensive adhesions that may have built up over the years. A thoracic approach allows for the evaluation of any herniated contents, lysis of any pleural adhesions, and subsequent reduction. If the surgery can be done on an elective basis, the patient should receive bowel preparation prior to the procedure due to the high risk of bowel injury during adhesiolysis.

The defect, once properly identified, should be debrided of all non-viable tissue. It is then primarily repaired with simple, non-absorbable sutures, such as nylon, either interrupted or in a continuous fashion. A defect too large to be closed primarily should be bridged with a prosthetic mesh and secured with interrupted monofilament sutures. A defect significantly contaminated by enteric contents should be temporized with a biologic mesh until it can be definitively repaired with a synthetic mesh on a later date. On occasions, a combined laparoscopy or laparotomy may be required due to extensive adhesions, when reduction of contents proved too difficult through a thoracic approach alone.

Breakdown of the repair, paralysis of the diaphragm secondary to injury to the phrenic nerve, and poor respiratory efforts are all potential complications of a surgical repair. Proper pulmonary toilet supplemented by adequate analgesia should be encouraged to prevent atelectasis. The surgeon should be vigilant regarding any potential breakdown, as delayed diagnosis can frequently lead to post-operative empyema formation, diaphragmatic abscesses, and eventual sepsis and organ failure.

Herniated viscera visualized on an upright chest x-ray can frequently be misidentified as pleural effusion or loculated empyema. Thoracostomy at this juncture can often lead to injured bowel and intrapleural contamination.

More commonly, however, a diaphragm injury is simply overlooked, and in cases where there is no clear indication for exploratory laparotomy, it can be easily missed. Mechanism, severity, and location of the injury should all raise the physician's suspicion of diaphragm involvement, especially due to morbidities secondary to a missed diagnosis.

When quickly diagnosed and repaired, diaphragm injuries tend to heal well because of robust vascular supply. Herniation, incarceration, and subsequent perforation of abdominal viscera are the most deadly complication resulting from a diaphragm defect. In chronic, undiagnosed diaphragmatic hernia diagnosed years after the traumatic event, loss of domain may have developed, making reduction impossible.

The diagnosis of diaphragmatic injuries is not easy, and often small injuries are missed. The condition is best managed by an interprofessional team that includes a trauma surgeon, general surgeon, radiologist, emergency department physician, nurse practitioner, and trauma nurses Once a diaphragmatic injury is diagnosed, surgery is recommended to prevent herniation of abdominal contents into the chest. Operating room and perianesthesia nurses are involved in care, assisting, monitoring patients.

Delayed diagnosis of diaphragmatic rupture, usually after visceral herniation through the diaphragm, should be treated with video-assisted thoracoscopic surgery (VATS) or a thoracotomy if warranted due to retraction of the diaphragm and the extensive adhesions that may have built up over the years. A thoracic approach allows for the evaluation of any herniated contents, lysis of any pleural adhesions, and subsequent reduction. If the surgery can be done on an elective basis, the patient should receive bowel preparation prior to the procedure due to the high risk of bowel injury during adhesiolysis.

In patients who have an early diagnosis and repair of the diaphragmatic injury, the outcomes are good, but if there is a delay, the recovery can be prolonged and be associated with both abdominal and chest complications.[11][12] 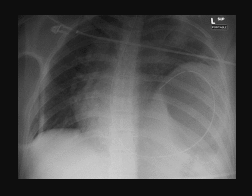