The diaphragm in the thorax is called the thoracic diaphragm and serves as an important anatomical landmark that separates the thorax, or chest, from the abdomen. It functions during breathing when it contracts to enlarge the thoracic cavity and reduce the intrathoracic pressure so that lungs may expand and fill their alveoli with air. It is a dome-shaped muscle and tendon that functions as the main muscle of respiration and is essential to the breathing process. It is a fibromuscular sheet that has a convex upper surface that forms the floor of the thoracic cavity and a concave under surface to form the roof of the abdominal cavity. The esophagus, phrenic, and vagus nerves, descending aorta, and inferior vena cava pass through the diaphragm between the thoracic and abdominal cavities. The diaphragm is asymmetric with the left side slightly more inferior than the right, chiefly because of the presence of the liver located on the right. The left side may also be partially inferiorly located because of the push by the heart.[1],[2]

Functions of the Diaphragm

The diaphragm pulls its central tendon down during contraction and then increases the vertical diameter of the thorax. This increases the negative pressure inside the thoracic cavity, which draws in air. Thus, the diaphragm is the most important muscle used in inspiration. During inhalation, the diaphragm contracts and is pushed inferiorly into the abdominal cavity where it appears flat. Simultaneously the external intercostal muscles located in between the ribs raise the anterior chest wall like the handles of a bucket. This results in the chest cavity becoming larger and wider, which allows air in from the outside. During exhalation, the rib cage and chest wall start to sag and revert to the original position. At the same time, there is relaxation and elevation of the diaphragm. This motion forces the air within the lungs to push out of the body.[2],[3]

When a person takes and holds a deep breath, the diaphragm will assist the muscles of the anterior abdominal wall to raise the intra-abdominal pressure. This maneuver is also called as Valsalva maneuver and is used to augment heart murmurs and classify them whether they are clinically right-sided or left-sided.

The diaphragm inserts into a central tendon. The top surface of the tendon is partially connected to the lower surface of the fibrous pericardium. Muscle fibers arising from the right crus traverse up on the left side and encircle the orifice of the esophagus in a sling-like loop. These fibers act as a sphincter and likely assist in preventing the regurgitation of the stomach contents into the thoracic part of the esophagus.[4]

The sternal part originates as 2 fleshy slips from the back of the xiphoid process.

The costal part originates from inner surfaces of the cartilages, adjacent parts of the lower sixth ribs on each side. It interdigitates with transversus abdominis.

The medial lumbocostal arch is a tendinous arch in fascia covering psoas major. Medially, it attaches to the side of the body of vertebra L1. Laterally, it connects to the front of the transverse process of vertebra L1.

The lateral lumbocostal arch is a tendinous arch in fascia covering the upper part of quadratus lumborum. Medially, attach to the front of the transverse process of vertebra L1. Laterally, it connects to the lower border of the 12th rib.

The left crus arises from the corresponding parts of the upper 2 lumbar vertebrae.

Medial margin of two crura forms a tendinous arc across the front of the aorta called the median arcuate ligament.

The use of deep muscle training contributed to a significant change in the position of the body in the sagittal plane and the increase in the amplitude of breathing.[5]

One can find the origins of the diaphragm along the lumbar vertebrae of the spine and the inferior border of the ribs and sternum.

The superior diaphragm origin is continuous from the xiphoid process anteriorly to lower 6 costal cartilages of the thorax laterally and first 2 lumbar vertebrae posteriorly. The musculoskeletal fibers radiate from all angles to the center of the body and converge into a central tendon which is the inferior attachment or muscular skeletal point.

The diaphragm has a dome-like structure with the peripheral segment attached to the chest wall and abdominal cavity. The muscle fibers from these attachments converge in a central tendon, which forms the crest of the dome. The periphery of the diaphragm is made of strong muscular fibers that have their origin from the surroundings of the inferior thoracic aperture. These muscle fibers than converge and insert into the central tendon.

A diaphragmatic hernia is a congenital disability that occurs when one or more of a person's abdominal organs (stomach, spleen, liver, intestines) move upward into the chest through a defect in the diaphragm. It is usually congenital but can be acquired. Congenital hernias are considered a medical emergency and require prompt surgery.[6]

A CDH is an abnormal development of the diaphragm during fetal life. The herniation leads to the passage of one or other abdominal organ in the chest leading to the pulmonary hypoplasia which is usually unilateral. The most common subtype of congenital diaphragmatic hernias is Bochdalek Hernia. Other types include Morgagni a hernia, diaphragm eventration, and central tendon defects of the diaphragm.

An ADH happens due to penetrating or blunt injury. Falls and motor vehicle accidents are major causes of blunt injury while stabs and gunshot wounds lead to penetrating injuries. Penetrating injuries are the more common cause than the blunt injuries as a cause of the diaphragmatic rupture. Further, there can be accidental damage to the diaphragm from the surgical causes. Infrequently, a diaphragmatic hernia may result without any identifiable cause and remain undiagnosed for an undetermined amount of time, until the herniation of abdominal organs in the chest start to cause symptoms.[7]

Both acquired, and congenital diaphragmatic hernias usually require immediate surgery. Surgery requires the return of the abdominal organs from the chest cavity back into their original location in the abdominal cavity. The diaphragm should be repaired with staples or permanent sutures with or without a prosthetic patch.

The diaphragm has 3 major openings and 5 minor openings.

The figure below shows the openings in the diaphragm: A=vena cava, B=esophagus, C=aorta. The muscular diaphragm surrounds the central tendon in the periphery.

The diaphragm has many other roles besides respiration. It acts as a barrier between the thoracic and abdominal cavity and prevents herniation of abdominal organs into the chest cavity.

Both penetrating and blunt trauma can injure the diaphragm. A tear or rupture of the diaphragm is often a difficult diagnosis. Options for diagnosis include laparoscopy, thoracoscopy or a CT scan. Irrespective of the size of the tear, the muscle must be repaired as soon as possible to prevent herniation of abdominal organs.

The diaphragm is also involved in hiccups. When the muscle is irritated, it can result in sudden contractions which can be uncomfortable. Most hiccups are short-lived, but in rare cases, hiccups may last for a day. If the hiccups persist, they can interfere with breathing. 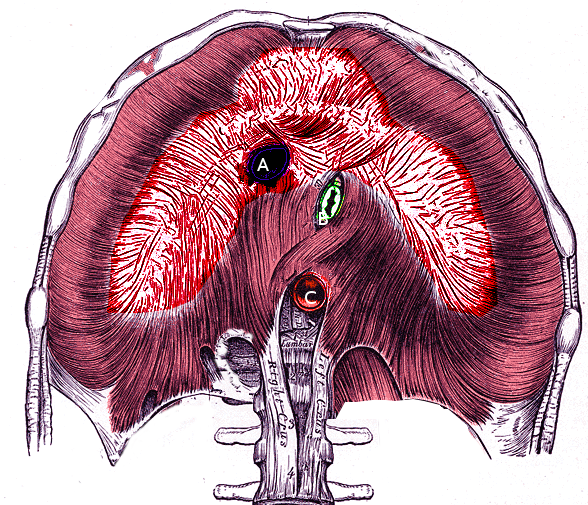