Diamond Blackfan anemia (DBA) is a congenital type of anemia with pure red cell aplasia causing congenital bone abnormalities and most commonly presents during the first year of life. It can be diagnosed by the simple criteria and hematological tests, which can help the patient attain a better quality of life and prevent the occurrence of tumors, organ failures, etc. Corticosteroids are the mainstay of treatment for DBA. Also, blood transfusions, stem cell transplantations, and gene therapy can be considered. This activity describes the presentation of Diamond Blackfan anemia and highlights the role of the interprofessional team in its management.

The definition of anemia is a low hemoglobin level than the normal range for each age group. Generally, anemia classifies into three categories based on the mean corpuscular volume (MCV) of red blood cells. Iron deficiency anemia is the most common type of anemia worldwide in all age groups.[1] However, here we talk about a rare type of anemia with genetic etiology.

Diamond Blackfan anemia (DBA) is a congenital type of anemia characterized by pure red cell aplasia and associated with congenital bone abnormalities. It is a chronic macrocytic-normocytic anemia. DBA is a heterogeneous genetic disease inherited as an autosomal dominant inheritance in 40 to 45% of cases. The remainder, 55 to 60% of cases, typically present sporadically.[2][3][4] There are also cases noted with autosomal recessive inheritance with less frequency.  Hydrops may occur but very rarely.[2]

Defective ribosomal protein biosynthesis initiates apoptosis of erythroid progenitor cells through p53 activation and stabilization, leading to erythroid failure. This mechanism is known as ‘ribosomal stress.'[2] Up to 50% of DBA cases have a heterozygous mutation of the ribosomal gene with loss of function.[2]

Diamond Blackfan anemia is a very rare disease with an incidence rate of 1 in 500000 live births. Onset generally is within the first year of life. The incidence of DBA is similar among different ethnicities and genders.[2][7]

Of all the ribosomal protein genes, RPS19, which codes a small ribosomal protein unit, is the most commonly involved mutated gene occurring in approximately 25% of cases of DBA.[2][4] Various types of mutations are present in more than 50% of RPS mutations. Among the types of mutations in the RPS gene are deletions, insertions, nonsense, splice sites, and frameshift changes. These mutations result in a deficiency of RPS19 protein, known as 'haploinsufficiency.'[2][4] Up to 50% of DBA cases have a heterozygous mutation of the ribosomal gene with loss of function in a single copy of the gene.[2]

RPS19 plays an essential role in 18S rRNA maturation and 40S synthesis. RPS19 mutation causes decreased production of RPS19 and 40S ribosomal subunits by reducing translation initiation. With the decreased initiation of translation of the gene, there is a negative impact on normal primary hematopoietic progenitor cell differentiation and production due to increased apoptosis.[2][4] Deficiency of RPS19 can be compensated by overexpression of exogenous RPS19; this helps explain the haploinsufficiency phenomenon and suggests DBA might be treatable with augmentation of the RPS gene.[2][4]

As per the ‘ribosomal stress’ mechanism, ribosomal deficiency activates and stabilizes p53, subsequently initiating apoptosis to cause bone marrow failure by terminating cell lines. Murine double minute (MDM2) is a ringer figure ubiquitin ligase that controls the level and activity of p53. When interacting with the normal ribosomal protein, MDM2 enhances p53 degradation.[2] In DBA, ribosomal stress many free RPS builds up due to disrupted ribosomal biosynthesis. These free RPS, such as RPL5, RPL11, RPL23, RPS27, and RPS7, bind with MDM2 to stabilize p53, leading to apoptosis, cell cycle arrest, and eventually erythroid hypoplasia.[2]

DBA also results from non-Rp gene mutations such as GATA1.  GATA1 encodes for transcription factors.[2][5][4] It plays an essential part in erythroid differentiation. GATA1 mutation of G to C transversion on the X chromosome leads to a substitution of leucine to valine. This mutation affects the splicing process of GATA1 and causes termination of GATA1, which plays a crucial role in the differentiation of erythroid cells. GATA1 mutation ultimately acts by a global translation blockade.[2][5][4]

In 90% of patients, Diamond Blackfan anemia starts before 12 months of age. It commonly presents with congenital bony malformations (50% of the cases) and growth retardation (30% of cases).[3] The median age of presentation and diagnosis is 2 months of age.[2][3] Children usually first present with lethargy and pallor.

Patients usually present with severe macrocytic anemia and normochromic anemia, along with erythroid aplasia due to congenital bone marrow failure. Typically platelet and leukocyte counts are in the normal range; however, there have been patients with low leukocyte and high platelet counts. Patients can have significantly low reticulocyte counts.[2] DBA has also associated with elevated fetal hemoglobin levels, erythropoietin, and eADA activities.[2][7][5][4]

DBA presents with a broad spectrum of phenotypes from mild to profound in severity. Physical abnormalities are present in 50% of cases.[2][3] The most common congenital physical abnormalities are thumb and upper extremity malformations, craniofacial anomalies, and short stature. The patient may also have a snub nose and wide-spaced eyes. The characteristic DBA anomalies include a distinct facial appearance and triphalangeal thumbs.[2][3][4]

PRL5 mutation has associations with cleft lip or cleft soft palate, while RPL11 largely correlates with thumb abnormalities but is also seen in cleft lip or palate cases.[2][3][4]

Erythropoietin levels will be elevated in Diamond Blackfan anemia due to a lack of EPO receptors in the setting of erythroid aplasia. Other biological tests may include immune phenotyping and Igg/IgA agglutinin titer.[9]

For molecular diagnosis, the first step is to characterize the phenotype with a bone marrow evaluation.

Molecular tests are done to identify a heterozygous pathogenic variant in genes commonly involved in DBA.

Corticosteroids are the first-line treatment of Diamond Blackfan anemia. However, due to long-term side effects of corticosteroids, patients with DBA often require chronic blood transfusions and concurrent iron chelation therapy.[2][3][5] A patient who is responsive to steroid therapy but with intolerable side effects will require chronic blood transfusions with a goal hemoglobin of 8 g/dl and requiring blood transfusion every 35 weeks.[2] Frequent monitoring of serum ferritin helps decide if iron chelation therapy is needed. Generally, iron chelation is started after 12 to 15 units of blood transfusions if serum ferritin concentration increases to 1000 to 1500 microgram/L or if hepatic iron concentration increases to 6 to 7 mg of the dry weight of liver tissue.[2][3][5] When iron chelation is required, deferasirox and desferrioxamine are the therapeutic choices. Deferiprone is not a recommendation due to its adverse effect of neutropenia.

The mechanism of action of corticosteroids remains obscure, but it seems to have a nonspecific anti-apoptotic effect on erythroid progenitors.[2] Metoclopramide can be used as a supplement to steroid therapy to decrease steroid dose and, therefore, the side effects.[4] Clinical trials also suggest leucine as a supplemental therapy to steroids.[4]

DBA may also receive treatment with hematopoietic stem cell transplantation (HSCT). This approach is the only treatment that cures the hematological manifestation of DBA; the procedure proves to be risky if a matched sibling donor is not available.[3][7][6][4] HSCT has a high success rate in patients less than 10 years of age treated with an HLA-identical donor. It is indicated as an alternative to chronic blood transfusions if the patient becomes non-responsive to chronic blood transfusions or develops side effects of iron overload.[2][3] However, HSCT also has side effects to take into consideration, including infection and graft versus host disease(GVHD).[2][6]

Since the RPS19 gene presents in 25% of DBA cases, gene therapy may prove beneficial in patients with the mutation; this involves the replacement of the normal copy of gene RPS19 to rid the patient of DBA symptoms.[2][10][4] For gene therapy, the viral vector system is the most common method, achieving a high success rate and safety profile.[6][10]

About 20 to 25% of DBA patients undergo spontaneous remission.[5]

Diamond Blackfan anemia patients are at high risk of developing a hematological complication in the first year of life.

DBA has a high risk of developing AML, MDS, and solid tumors.

Other complications like growth failure, organ failure, infection are related to iron overload due to blood transfusion, chronic steroid use, and HSCT.

Patients with DBA should be monitored with complete blood counts frequently.[3] Periodic bone marrow biopsy or aspiration to evaluate cellularity and morphology helps diagnose any new cytopenia or bone marrow failure.[3] Patients who are steroid-dependent or transfusion-dependent should be monitored for blood pressure and growth as they are at high risk of organ failure; often, an endocrinology consult is necessary.[3] Healthy DBA patients need to follow up every 4 to 6 months with history, physical examination, and complete blood count for cancer surveillance.[3] The rapid decline of any cell line indicates bone marrow failure, and bone marrow biopsy with cytogenetic studies is required to diagnose chromosomal abnormalities associated with cancer.[3]

Relatives of DBA are at risk of developing DBA, given approximately 40 to 45% of autosomal dominant DBA patients have inherited a pathognomic variant from one of the parents. Additionally, X-linked inheritance has been noted.[3] It is appropriate to offer genetic testing if a pathognomic variant is known. The patient may receive an offer for other hematological tests for early diagnosis of DBA and cancer.[3]

Approximately 55 to 60% of cases of DBA are found to have a de-novo pathognomic variant; this may be a result of alternate paternity or maternity, including assisted reproduction or adoption.[3]

Although Diamond Blackfan anemia presents in only a small percentage of patients, significant complications can develop. An interprofessional team that has an integrated approach towards the management of DBA is essential for a better outcome. An evidence-based approach is of paramount importance when dealing with patients suffering from DBA.

The pharmacist should educate the patient on corticosteroids, as they are the drugs of choice. These drugs have serious side effects that require monitoring. Pharmacists should also verify all dosing and perform medication reconciliation, reporting any concerns to the healthcare team.

The hematology nurse must educate the patient about the potential adverse impact of chronic blood transfusions, which relate to iron accumulation. Nursing will also be on the front lines administering these transfusions and must report on the effectiveness or lack thereof with these interventions.

The obstetrician and labor & delivery nurses should counsel the patient on pregnancy. DBA patients during pregnancy can trigger a relapse of the condition when one is in remission. Hence, pregnancy should be avoided in a patient with DBA and should remain under high-risk obstetrics care in such circumstances.

To determine renal, liver, and cardiac abnormalities, renal, liver imaging, and echocardiograms are recommendations for patients with DBA.[11][12][13] Also, DBA being an autosomal dominant, each child will have a 50% probability of inheriting a pathological variant. Hence prenatal testing is advised in pregnant women in whom a familial pathological variant is present.[3]

Because of the constant need for treatment and admissions, the quality of life of many patients is poor, and hence, a mental health nurse should be involved in counseling. Finally, social workers should be involved to ensure that the patient has the necessary support and finances to undergo treatment. Open communication between the interprofessional team is necessary for improved outcomes and limiting morbidity of the treatment.

As is evident from the above, DBA requires an interprofessional team approach, including physicians, specialists, specialty-trained nurses, psychological professionals, and pharmacists, all collaborating across disciplines to achieve optimal patient results. [Level 5] 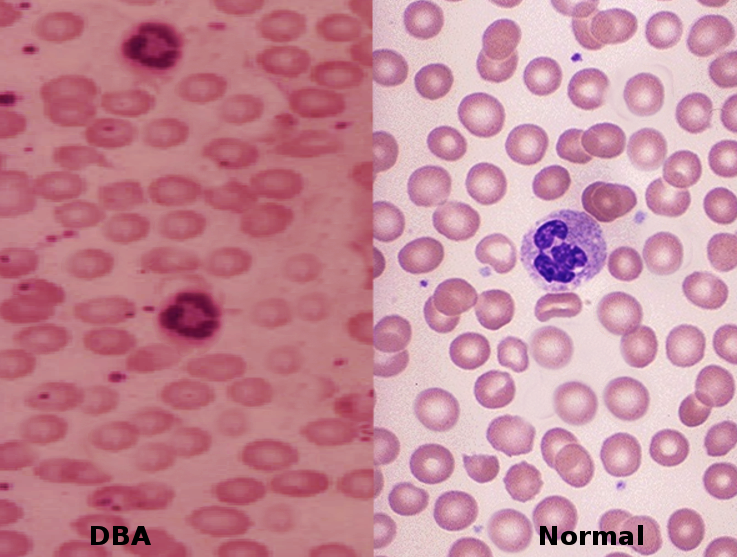