Cutis marmorata telangiectatica (CMTC) is a rare, sporadic, congenital cutaneous vascular disorder of unknown etiology. CMTC usually presents at birth with persistent cutis marmorata, vascular telangiectasia, and occasionally, ulcers. There is typically improvement of this reticular vascular skin pattern during the first year with gradual improvement in time. Some infants with CMTC have been associated with musculoskeletal anomalies, vascular abnormalities, cardiac defects, neurological defects, and ocular anomalies. This activity reviews the workup of cutis marmorata telangiectatica congenita and describes the role of health professionals working together to manage this condition.

Cutis marmorata telangiectatica congenita (CMTC) is a rare, sporadic, congenital cutaneous vascular disorder of unknown etiology.[1][2] CMTC usually presents at birth with persistent cutis marmorata, vascular telangiectasia, and occasionally, ulcers.[1] There is typically the improvement of this reticular vascular skin pattern during the first year with gradual improvement in time.[1] Some infants with CMTC have been associated with musculoskeletal anomalies, vascular abnormalities, cardiac defects, neurological defects, and ocular anomalies.

Cutis marmorata telangiectatica congenita is of unknown etiology; however, several studies have attributed the cause of the disease to be multifactorial.[1]

CMTC is usually present at birth however some cases of delayed onset have been reported with lesions developing three months to 2 years later.[2][3] The frequency of CMTC is unknown; presently, about 300 cases have been reported.[3] There has been no gender predilection seen in CMTC.[3] Many studies have suggested a female predominance, however, the difference was not statistically significant.[4]

The pathogenesis of this disorder is unclear and likely multifactorial.[3] Most cases of CMTC have occurred sporadically.[3] An autosomal dominant mode of inheritance with incomplete penetrance and teratogens have been considered in playing a role in the development of CMTC.[3] Some authors have suggested a lethal gene hypothesis due to the patchy distribution of the lesions and its’ sporadic nature.[4] Elevated maternal serum human chorionic gonadotrophin level and fetal ascites have also been associated with this disease.[4]

The diagnosis of CMTC is clinical, as histology is nonspecific. Swollen endothelial cells, abnormal dilation of multiple capillaries in all layers of the dermis and subcutaneous tissue, as well as dilated veins and venous lakes, can be seen.[1][2] Sparse perivascular lymphocytic infiltration within the dermis may also be seen.[2]

CMTC is characterized by dark purple to red, reticulated vascular pattern intermixed with telangiectasia and occasionally prominent veins.[5][6] The lesions can be localized or generalized and usually present at birth.[3][4] The localized variant is said to be more common, affecting about 60% of children with the disease, while the generalized form is said to occur in about 40% of children with CMTC.[4] When localized, it presents unilaterally, in a segmental fashion with a sharp demarcation that does not cross midline, usually affecting the lower limbs followed by trunk and face.[2] Generalized forms of CMTC tend to spare palms, soles, and mucous membranes while most commonly affecting the trunk, limbs, face, and scalp[4].

Areas of skin that are enclosed by the reticulated pattern may be normal, erythematous, atrophic, and or even ulcerated.[7] The purple mottling of the lesions may be enhanced in a cold environment; however, the persistent mottling of the skin after warming is a diagnostic pearl of CMTC.[3] Some lesions can be blanched readily on palpation, while other lesions may be partly obliterated even with firm pressure.[2] Hypotrophy of the affected limb is the most common associated finding. However, hypertrophy of the limb may also be seen.[1]

Diagnosis of CMTC is clinical; with diagnostic criteria proposed by Kienast and Hoeger, that includes the presence of three major criteria: (1) Congenital reticular erythema, (2) absence of venectasia, and (3) Unresponsiveness to local warming; and the presence of two or more minor criteria: (1) fading of erythema within two years, (2) Telangiectasia within the affected area, (3) Port-wine stain, (4) Ulceration withing affected area, (5) Atrophy within affected area. These criteria, however, have not been validated.[8]

Imaging studies are indicated when an associated congenital anomaly is suspected. Consider evaluation by ophthalmology, orthopedic surgery, neurosurgery, and/or vascular cosmetic surgery depending on the presenting associated abnormality. Limb girth and length measurements should be monitored on follow up.[4] Affected patients should be screened for associated anomalies for at least three years.[1]

CMTC usually does not require the treatment of skin lesions.  Fading of erythema and marmoration during the first two years of life can be seen most probably due to the normal thickening and maturation of the skin, however, they rarely disappear completely.[1][7]

Avoidance of cold, vasodilators, aspirin, pentoxifylline, PUVA are the many reported treatments that have shown varying results.[6] Studies have shown CMTC generally respond poorly to laser therapy.[3] If ulceration is present, treat infected areas and use occlusive dressings if needed.

The differential diagnosis of CMTC includes physiological cutis marmorata, Klippel-Trenaunay syndrome, Sturge-Weber syndrome, Adams-Oliver syndrome, Bockenheimer disease, and reticular hemangioma syndrome, among other disorders with a similar cutaneous presentation.[2][4][5][6] Physiological cutis marmorata presents in a similar reticular symmetric pattern over the trunk and extremities, however, unlike CMTC. The vascular pattern disappears with local warming.[4][5] In Klippel-Trenanuany syndrome (KTS), port wine stains, venous varicosities, and soft-tissue hypertrophy, and sometimes internal hemangiomas can be seen.[4] The absence of venectasia until the age of one year should aid in the differentiation of CMTC from KTS. Sturge-Weber syndrome can be characterized by facial port-wine stains, seizures, mental retardation, glaucoma, as well as cerebral malformations and tumors.[1] Adams-Oliver syndrome should be ruled out as mottling consistent with CMTC can be seen along with cardiac malformations, limb defects, and aplasia cutis congenita.[1]

Bodenheimer disease (diffuse phlebectasia) presents with diffuse large and painful venous ectasias, usually affecting one limb in contrast to CMTC. This disorder usually has an onset at childhood with gradual progression.[1] Reticular hemangioma syndrome presents with vascular anomalies and is distinguished by the coexistence of anogenital-urinary-sacral anomalies, intractable ulceration, and sometimes cardiac failure.[2] Additionally, Divry Van Boageart syndrome, homocystinuria, Down syndrome, Cornelia de Lange syndrome, and neonatal lupus erythematosus are disorders that can be associated with a physiological cutis marmorata and must also be considered in the differential diagnosis.[2][4]

Prognosis is overall good with greater than half of the patients experiencing improvement of skin lesions.[1][7]

Although skin lesions fade over time, the associated limb asymmetry persists. Other complications are those related to treatment, specifically increased risk of scarring associated with laser therapy in patients with persistent CMTC [9]

CMTC usually does not require the treatment of skin lesions. Prognosis is overall good with greater than half of the patients experiencing improvement of skin lesions.[1][7] However, when a diagnosis of CMTC is reached it is imperative to rule out and treat or manage any associated anomalies. Dermatology nurses and nurse practitioners can be involved in care, provided education, follow up, and arranging consultations when needed. [Level 5] 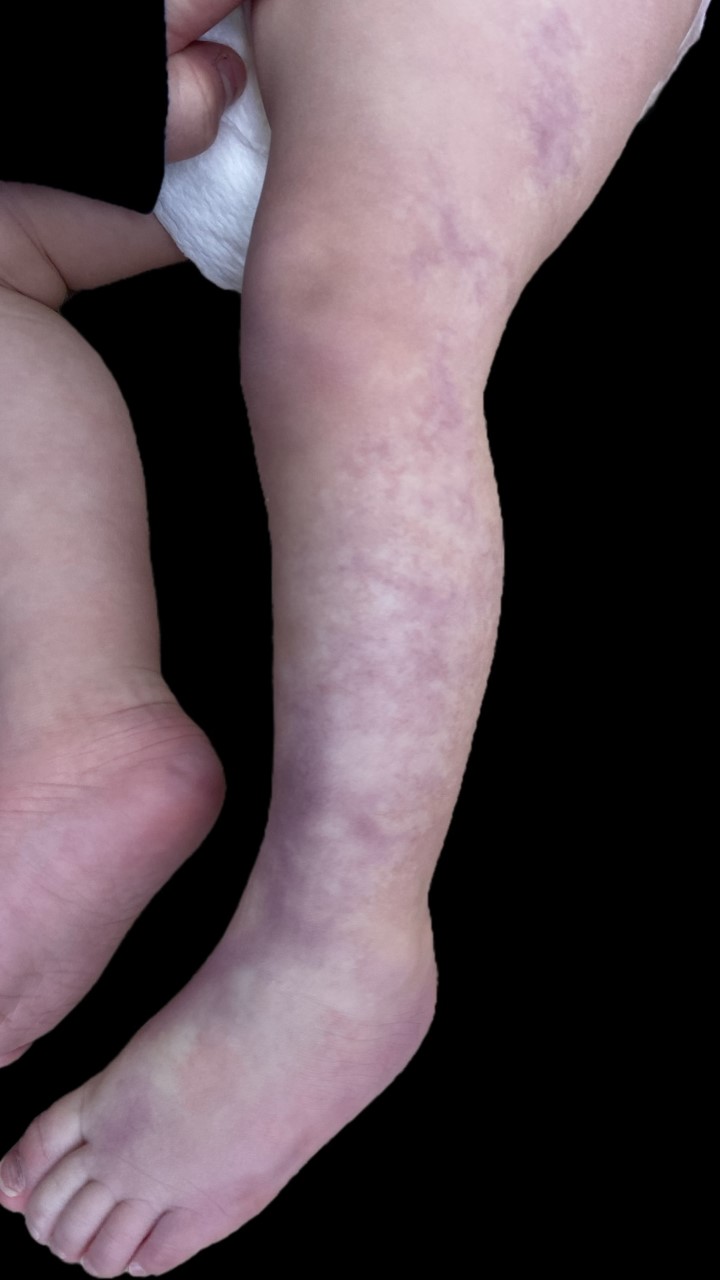 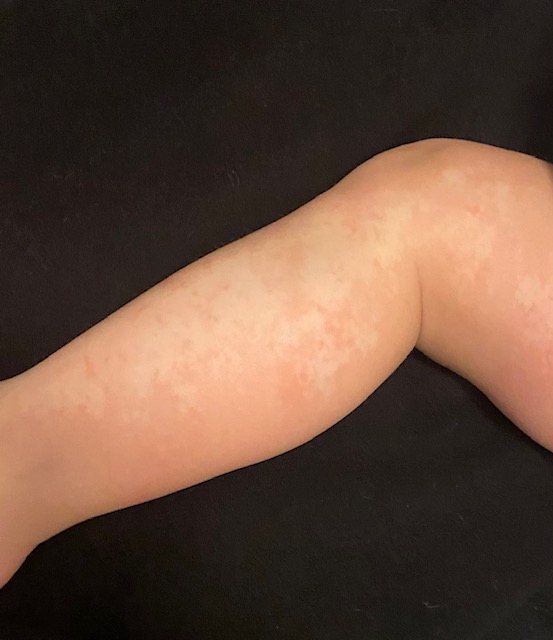 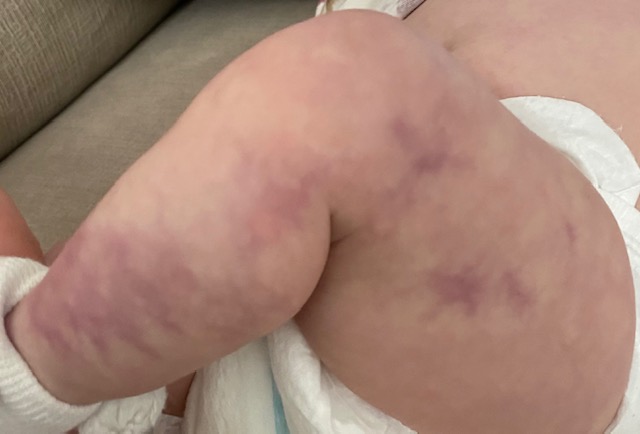