The actual incidence and prevalence of Cushing syndrome are not known. The prevalence of the disease is highly variable across different ethnic and cultural groups depending upon the frequency and spectrum of the medical conditions requiring steroid-based therapy. However, of the known cases iatrogenic hypercortisolism outweighs the endogenous causes, of the endogenous causes pituitary-mediated ACTH production accounts for up to 80% of cases of hypercortisolism, followed by adrenals, unknown source, and ectopic ACTH production secondary to malignancies.[7][8]

Cortisol is a steroid hormone produced by the zona fasciculata of the adrenal cortex. After production the cortisol is carried to different parts of the body by cortisol binding protein, almost 90% of cortisol binds to this (CBG) protein and has a bioavailability of 60% to 100%. Synthetic corticosteroids have varying bioavailability and potency, but all affect similar pathways. It is a catabolic hormone that is released under stressful conditions. The excess of cortisol results in an increased rate of gluconeogenesis, glycogenolysis and increases insulin resistance. Cortisol is a steroid hormone, and it directly affects the transcription and translation of enzyme proteins involved in the metabolism of fats, glycogen, proteins synthesis, and Kreb's cycle. It promotes the production of free glucose in the body, elevating glucose levels, while simultaneously increasing insulin resistance. The destruction of protein yields amino acids which are used in gluconeogenesis. The prolonged catabolism of proteins causes purplish striae of the torso, osteoporosis, and poor wound healing. All these processes involve collagen which is a three amino-based protein. High cortisol levels also cause immune disruptions; this hormone leads to a decrease in lymphocyte levels and increases the neutrophils. It causes detachment of marginating pool of neutrophils in the bloodstream and increases the circulating neutrophil levels although there is no increased production of the neutrophils. This mechanism explains the typical picture of raised TLC where there is decreased lymphocyte number and increased neutrophils. The corticosteroids mediate the downregulation of NF-kappaB, regulation of AMP kinase, glycogen phosphorylase, superoxide dismutase, and many other enzymes. Cortisol inhibits the production of IL-2, TNF alpha, IFN alpha, and gamma. Decreased IL-2 levels prevent the proliferation of T-lymphocytes.[9]

Psychological problems such as cognitive dysfunction and depression are not uncommon. Some patients may develop severe osteopenia and bone fractures.

Patients may also have a history of hypertension, peptic ulcer disease, and diabetes.

Physical examination of the patient will reveal increased fat deposits in the upper half of the body leading to "Buffalo torso," characteristic moon facies (earlobes are not visible when viewed from the front), thin arms and legs, acne, hirsutism, proximal muscle weakness of the shoulder and hip girdle muscles, paper-thin skin, abdominal pain due to gut perforation in rare cases,  and wide vertical purplish abdominal striae.

The evaluation of suspected Cushing’s syndrome can include the demonstration of endogenous hypercortisolism with the late-night salivary cortisol or a 24-hour urine free cortisol. The inability to appropriately suppress endogenous cortisol production is detected with the one-milligram overnight dexamethasone suppression test and the 2-day low-dose dexamethasone suppression test.[10]

The 24-hour urine free cortisol test can detect endogenous overproduction of cortisol. The collection should start with an empty bladder(discard first-morning void).  Collect all urine for 24 hours.  Abnormally low, or high, urine Valium can cause false-negative and false-positive results respectively.  A low GFR (less than 60 ml/min) can falsely lower the urine free cortisol. Borderline elevations of the 24-hour urine free cortisol result are often false positives.  A result more than four times the upper limit of normal is rare except in Cushing syndrome.

The 48-hour low-dose dexamethasone suppression test is a confirmatory test.  Dexamethasone, 0.5 mg, is given every 6 hours starting at 0900 h.  24 hours later, at 0900 (6 hours after the last dexamethasone dose), a serum cortisol level is checked.  A result greater than 1.8 mg/dl demonstrates an inability to suppress endogenous cortisol production and is consistent with Cushing syndrome.  This test is useful to exclude pseudo-Cushing syndrome, seen in patients with anxiety, depression, alcoholism, diabetes, and morbid obesity.

Serum ACTH levels can differentiate ACTH-dependent Cushing syndrome (elevated ACTH or inappropriately normal ACTH) from ACTH-independent (low ACTH level) Cushing syndrome. In patients with ACTH-dependent Cushing syndrome, the high-dose dexamethasone suppression test done by giving 8 mg dexamethasone by mouth at 2300 h and checking cortisol the next day at 0800 h, can differentiate pituitary ACTH from an ectopic ACTH source. A high-dose dexamethasone suppression test will decrease cortisol level by 50 % if the ACTH source is a pituitary adenoma, but not if ACTH is secreted by an ectopic tumor (e.g., oat cell lung carcinoma). Pituitary MRI, unenhanced CT scan of the adrenals, and chest X-ray and CT are also useful to localize the pathology.

False-positive results (pseudo-Cushing) can be associated with conditions such as anxiety, depression, uncontrolled diabetes mellitus, alcoholism, and obsessive-compulsive syndrome.  Although dexamethasone suppression testing and 24-hour urine cortisol levels can be abnormal, results are generally less than 4-fold the upper limit of normal.

The best therapy for iatrogenic Cushing syndrome is to taper exogenous steroids. Chronic exposure to steroids can suppress the adrenals functioning and it can take several months for normal adrenal functioning to recover.  Therefore, steroids should be slowly tapered allowing adrenal functioning to recover. Hypercortisolism due to Cushing disease or adrenal tumor or ectopic tumor is best treated with surgical resection.[12] The individualized approach should be followed to evaluate recurrence after surgical resection. Pituitary MRI should be done1-3 months after surgical resection to evaluate success in Cushing disease. Late-night salivary cortisol or serum cortisol or 24-hour urine free cortisol measurement is recommended to ensure eucortisolism after surgical treatment.

[12] Other oral medications include pasireotide, cabergoline, and mifepristone.[13]

In the management of Cushing syndrome, it is crucial to treat comorbidities such as diabetes mellitus, hypertension, osteoporosis, psychiatric issues, and electrolyte disorders.

Although the earliest studies of Cushing syndrome reported a median survival of 4.6 years and five-year survival of only 50%, with recent advances in treatment, the standard mortality ratio is similar to the age-matched population.  The morbidity and mortality of Cushing syndrome are primarily due to the effects of related conditions such as diabetes, hypertension, heart disease, obesity, and osteoporosis with fractures. The prognosis is worsened in the setting of an unresectable hormone-secreting tumor.

Cushing syndrome caused by exogenous drugs is a reasonably preventable malady. Controlled use of corticosteroids in the clinical settings with regular health follow-up may reduce the burden of disease significantly. If the patient with ACTH-dependent Cushing syndrome undergoes a curative surgery, special attention should be paid to prevent adrenal crises and subsequent mortality and morbidity.

The most common cause of Cushing syndrome is the use of corticosteroids for a long time. Because these drugs are prescribed by many clinicians, it is important to manage Cushing syndrome with an interprofessional team; if the diagnosis is missed, the mortality is very high.

At the time of discharge, the patient should have a dietary consult and how to prevent osteoporosis.

The nurse should educate the patient on the risk of infections and when to follow up with the healthcare provider.

Patients should be warned that they should not take any medication without first speaking with the primary care provider. More importantly, they should not stop the corticosteroids on their own.

All patients diagnosed with Cushing syndrome need long-term follow-up until the syndrome has been cured or eradicated. Finally, clinicians, nurses, and pharmacists should educate patients about the potential adrenal crisis if the corticosteroid is stopped abruptly. An ID bracelet should be worn by patients taking corticosteroids.  [14][15](Level V) By working as an interprofessional team with open communication, one may lower the morbidity of these agents. [Level 5]

Prolonged exposure to corticosteroids is not a benign event and associated with high morbidity and mortality. Individuals diagnosed with Cushing syndrome are at a higher risk of death compared to the general population. The morbidity and mortality of Cushing syndrome are primarily due to the effects of related conditions such as diabetes, hypertension, heart disease, obesity, and osteoporosis with fractures. The prognosis is worse if the patient has an unresectable tumor secreting the hormones. In addition, the high doses of endogenous glucocorticoids may mask some abdominal signs and symptoms leading to a missed bowel perforation. Finally, it is important to be aware that sudden removal of glucocorticoids can also precipitate adrenal crises, hence the withdrawal has to be tapered over a few weeks or months. [4][16] [Level 5] 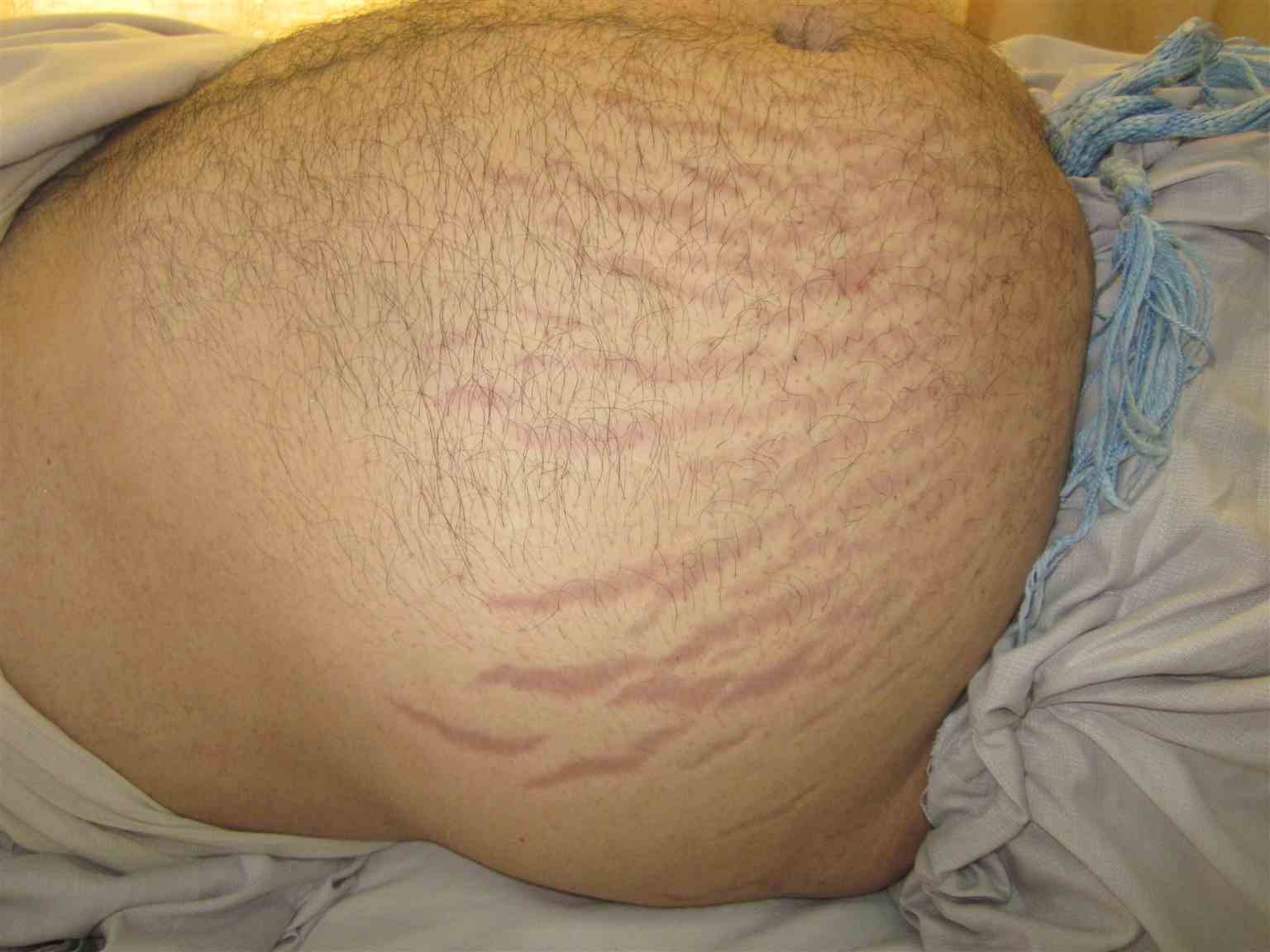 Moreira AC,Antonini SR,de Castro M, MECHANISMS IN ENDOCRINOLOGY: A sense of time of the glucocorticoid circadian clock: from the ontogeny to the diagnosis of Cushing's syndrome. European journal of endocrinology. 2018 Jul     [PubMed PMID: 29661784]