The term “crocodile tears” is derived from the ancient belief that crocodiles weep after killing their victims. “crocodile tears syndrome,” also known as Bogorad syndrome, is the shedding of tears while eating or drinking in patients recovering from Bell’s Palsy. It is also referred to as gustatory lacrimation. This activity reviews the cause, pathophysiology and presentation of crocodile tear syndrome and highlights the role of the interprofessional team in its management.

The term “crocodile tears” is derived from the ancient belief that crocodiles weep after killing their victims. “crocodile tears syndrome,” also known as Bogorad syndrome, is the shedding of tears while eating or drinking in patients recovering from Bell’s Palsy. It is also referred to as gustatory lacrimation.[1][2]

The anatomy of the facial nerve is a mixed nerve that has motor, sensory, and parasympathetic components.

Facial Nerve Course and its Branches

The facial nerve consists of a motor and sensory root. The motor root loops around the abducens nucleus in the floor of the fourth ventricle and emerges at the junction of pons and medulla along with the sensory root. The 2 roots travel along with the eighth cranial nerve to reach the internal acoustic meatus, and the 2 roots fuse at the lower part of the meatus to form a single trunk. Within the meatus, the nerve gets divided into three parts by 2 bends following which it exits the skull via the stylomastoid foramen. The facial nerve then crosses the stylomastoid process and enters the parotid gland at its posteromedial surface. It divides into its terminal branches ant the angle of the mandible:

Branches Within the Facial Canal

There are different theories regarding the cause of crocodile tears syndrome. The widely accepted theory is due to Bell’s palsy or traumatic disruption of the nervus intermedius.

Bell's palsy is facial nerve palsy leading to facial muscle weakness due to an unknown cause. Nemet et al. found the incidence of Bells Palsy to be 0.08% per year and usually the incidence increases with age (fourth to sixth decades of life).[3] In a study published by Valenca et al., females were found to be more affected by Bell's palsy and the left-eye was more frequently involved as compared to the right.[4] Crocodile tears syndrome is a complication occurring of Bell's palsy with an incidence of 3.3%.[4] As stated by Yamamoto et al., crocodile tears syndrome occurs after approximately 6 to 9 months after Bell's palsy.[5]

Another theory put forth by Spiers et al. is a congenital abnormality. This was supported by the finding that few patients with crocodile tears syndrome also had underlying lateral rectus palsy or co-existing with Duane retraction syndrome. It was suspected for the lesion to be in the pons adjacent to the abducens nerve.[6] Another mechanism for crocodile tears syndrome is thought to be the formation of an artificial synapse at the injury site. This synapse allows the impulses to jump from one fiber to another and crossovers are likely, leading to crocodile tears syndrome.[7]

Crocodile tears syndrome involves unilateral lacrimation or tearing whenever the patient is eating or drinking. However, bilateral cases have also been recorded by Speirs et al.[6] On clinical and slit-lamp examination of the eye and the lacrimal appendages, it appears within normal limits. This rules out other causes of epiphora such as lacrimal duct obstruction, chronic dacryocystitis, punctal stenosis, conjunctivitis, and foreign body in the conjunctiva. Crocodile tears syndrome is mostly a diagnosis of exclusion in patients with a prior history of facial nerve palsy. Patients with the previous incidence of Bell’s palsy may give a history of acute-onset symptoms of neck, mastoid or ear pain, altered taste or facial sensation, and hyperacusis.

Crocodile tears syndrome is a diagnosis of exclusion. Slit lamp examination of the eye and appendages is usually done to rule out other causes of epiphora. The basal tear secretion of an individual can be assessed by using the Schirmer's test. In the case of crocodile tears syndrome, it can be performed before and after gustatory stimulation to document increased tearing after salivation. It is also important to rule out other differentials.

Historically, many different treatment options have been used to stop the lacrimation. A 5% solution of guanethidine was used to block the adrenergic receptors in the lacrimal gland.[6] Peroral treatment with propantheline bromide 30 mg was also tried.[6] It was also believed that instilling 1% homatropine hydrobromide in the conjunctival sac would lead to secretomotor nerve blockade.[6]However, the side-effects of these pharmacological modulations outweighed their therapeutic outcome and thus, presently, they are not the preferred line of treatment.

The treatment of crocodile tears syndrome depends on the severity of the hyperlacrimation and the need of the patient. Mild cases are generally managed by counseling and regular monitoring. Less drastic surgical options are used, and they are proving to be an effective way to control the tearing. Subtotal resection of the palpebral lobe of the lacrimal gland is considered beneficial by McCoy et al., and pre-operative Schirmer’s test helps to control the amount of gland to be resected and thus preventing dry eye.[1]

The diagnosis of crocodile tears syndrome should be considered after excluding common differential diagnosis such as simple epiphora following Bell’s palsy.[9] This occurs due to loss of tone of the orbicularis oculi muscle, which leads to sagging of the lower eyelid. As the lower lid is not apposed to the eye, the normal tears cannot drain through the punctum, and they spill over resulting in the watering of the eye.

Other differentials include nasolacrimal duct obstruction, conjunctivitis, and allergies. These conditions are not associated with hyperlacrimation, and typically the patient will give no history of increased tearing while eating food. Furthermore, in crocodile tears syndrome, the clinical examination of the eye and its appendages will be within normal limits. Also, a latency of 6 months is usually present between the onset of facial nerve palsy and crocodile tears syndrome for the nerves to regenerate.[9]

Since crocodile tears syndrome is a rare syndrome, it is important that it is correctly diagnosed at its onset and improve patient outcomes. At times, if the symptoms of Bell's palsy are not bothersome for the patient, they frequently opt for only periodic monitoring of the condition. This was observed in a 74-year-old female in Brazil who did not get the correct diagnosis of crocodile tears syndrome for nine years.[10] (Level III)

One study on punctoplasty revealed that mild grades of punctal stenosis could be managed with rectangular 3-snip punctoplasty but in patients with high-grade punctal lesions, there was a high recurrence rare of functional epiphora and punctal restenosis.[11]

Hence, it is important to increase awareness and knowledge about crocodile tears syndrome among physicians, physician assistants, nurse practitioners, oral and maxillofacial surgeons, and dentists who may come across these cases on a regular basis. Further, they must be able to educate patients and their families. More important, an interprofessional approach to problems of the eye can also result in early detection of other nasolacrimal duct lesions like cancers.[12] (Level III) 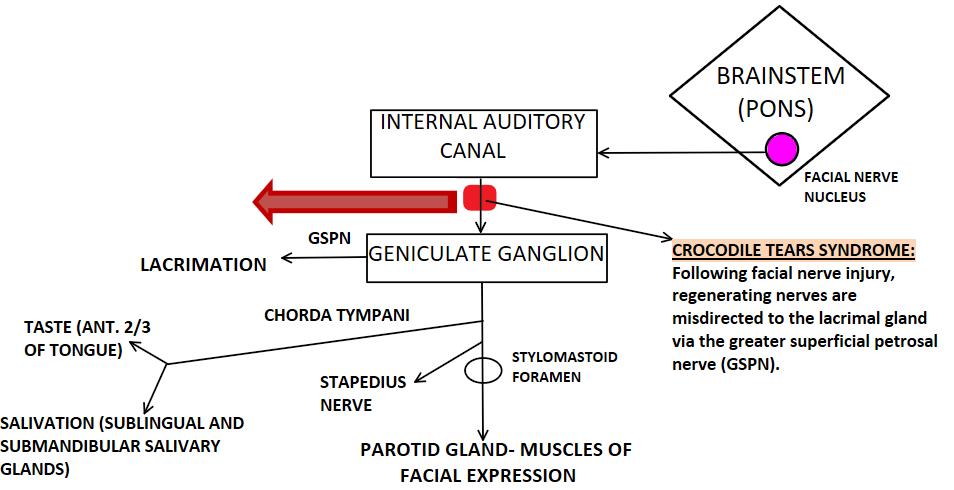 Spiers AS, Syndrome of "crocodile tears". Pharmacological study of a bilateral case. The British journal of ophthalmology. 1970 May     [PubMed PMID: 5428665]