Creatine phosphokinase (CPK), also known by the name creatine kinase (CK), is the enzyme that catalyzes the reaction of creatine and adenosine triphosphate (ATP) to phosphocreatine and adenosine diphosphate (ADP). The phosphocreatine created from this reaction is used to supply tissues and cells that require substantial amounts of ATP, like the brain, skeletal muscles, and the heart, with their required ATP. The normal CPK level is considered to be 20 to 200 IU/L. Many conditions can cause derangement in CPK levels, including rhabdomyolysis, heart disease, kidney disease, or even certain medications.[1][2][3]

There exist four major isoenzymes of CPK, with two in the cytosol and two in the mitochondria. The cytosol variants are the muscle type (M chain) and the brain type (B chain). The cytosol variants can produce the heterodimer CK-MB or homodimers CK-MM and CK-BB. CK-MB is mostly present in cardiac muscle, CK-MM in skeletal muscle, and CK-BB in smooth muscle and most non-muscle tissues such as the brain. The mitochondrial variants are an octamer of Mi-CK in the brain and a dimer of Mi-CK in muscle. CK-MB further subdivides into two types, CK-MB1 and CK-MB2, when it is in the bloodstream.[4][5]

Creatine kinase activity is one of the oldest markers of acute myocardial infarction (AMI). Creatine kinase activity begins to rise within 12 hours of AMI symptoms, peaks at 24 to 36 hours, and normalizes after 48 to 72 hours. The issue with measuring creatine kinase activity for AMI is that it is not specific to the heart. CK activity can increase in several conditions such as rhabdomyolysis, chronic muscle diseases, burns, and even after strenuous exercise. Thus, the CK-MB isoenzyme started being used to aid in the diagnosis of AMI. Although the CK-MB measurement is an improvement over just CK, it can still increase in other conditions such as acute muscle injury, congestive cardiac failure, and arrhythmias.[7]

Elevated levels of CK-MB have long been used to diagnose a case of AMI. Although many centers are now going by troponin levels instead of CK-MB, there is a newer, more specific CK-MB method. The new testing method involves measuring the values of the CK-MB1 and CK-MB2 isoforms. In a normal patient, the ratio of CK-MB2 to CK-MB1 should be at 1 to 1. In the case of AMI, the ratio will be at its peak within 4 hours of the infarction. However, some evidence of AMI can be detected as early as 1-2 hours after the infarction. To diagnose AMI, the ratio of CK-MB2 to CK-MB1 should be greater than 1.7 to 1. However, even a ratio of more than or equal to 1.5 to 1 points strongly to a diagnosis of AMI.[7][4][8]

Patients with Alzheimer disease and Pick disease may have decreased CPK activity in the brain. The BB-CK activity primarily decreased in these patients, resulting in an overall decrease in total CPK activity.[5]

CPK levels also elevate in patients with rhabdomyolysis. Rhabdomyolysis may result from a crush injury, drug use, viral infections, and strenuous exercise. It typically presents with muscle pain and weakness alongside dark-colored urine. There is a breakdown of skeletal muscle, which leads to a release of CPK along with alanine aminotransferase (ALT), aspartate aminotransferase (AST), and electrolytes. The reason for the dark urine is due to myoglobinuria. A CPK level that increases to more than 1000 IU/L is indicative of rhabdomyolysis; values over 5000 IU/L indicate severe rhabdomyolysis. Patients with sickle cell trait who suddenly start a new strenuous exercise program such as spin class are also at an increased risk of rhabdomyolysis, with reported levels of creatine kinase higher than 70000 IU/L in some cases. The most common complication resulting from rhabdomyolysis is acute kidney injury. Therefore, any patient with suspected rhabdomyolysis should receive prompt treatment with intravenous fluids to preserve kidney function.[9][10][11]

Patients on statins such as simvastatin may have an adverse effect of significantly elevated CPK levels, potentially leading to rhabdomyolysis. This adverse effect becomes amplified if the patient also receives a concurrent drug that inhibits cytochrome P450-3A4 (CYP3A4). Some common medications to avoid in patients on statin therapy include clarithromycin, erythromycin, verapamil, tamoxifen, and many antifungal agents.[11][12]

Suggestions also exist that the guidelines for high CPK levels above 200 IU/L may not apply to all populations. In black men specifically, the CPK levels may be as high as 1200 IU/L, even in a healthy person. Therefore, some studies have tried to set some new thresholds for upper limits of CPK as follows: White women: 325 IU/L, White men: 504 IU/L, Black women: 621 IU/L, Black men: 1200 IU/L.[3]

Low levels of CPK can be present in patients with connective tissue diseases such as rheumatoid arthritis or systemic lupus erythematosus. There may also be low levels in patients with reduced physical activity, such as elderly bed-ridden patients.[13]

Creatine phosphokinase is an important enzyme, more so in the diagnosis of rhabdomyolysis than AMI in the current medical setting. It is essential in patients with sickle cell anemia or sickle cell trait. It requires careful management with an interprofessional team consisting of a pediatrician and geneticist. The geneticist should assess the type of sickle cell disease during newborn screening. The pediatrician should advise the parents of the child that there exist increased chances of rhabdomyolysis from strenuous exercise in children with sickle cell anemia and sickle cell trait.

In a patient who already presents with rhabdomyolysis after an increased creatine phosphokinase level, an interprofessional team consisting of a nephrologist, surgeon, and nurse may manage the condition. The nephrologist would be working to increase the kidney function in such patients as acute kidney injury is the most common complication of rhabdomyolysis. The surgeon may need to surgically repair any damaged muscle or tissue that leads to the condition. The nurse should teach the patient about managing their condition and how to avoid having an attack of rhabdomyolysis again. The healthcare team can also consult with the pharmacist to verify that any of the patient's medications are not potential sources for elevated CPK. Any hospital staff members working in the emergency department should be aware that intravenous fluid therapy should be started promptly to curb acute kidney injury in patients with suspected rhabdomyolysis.[10][11] 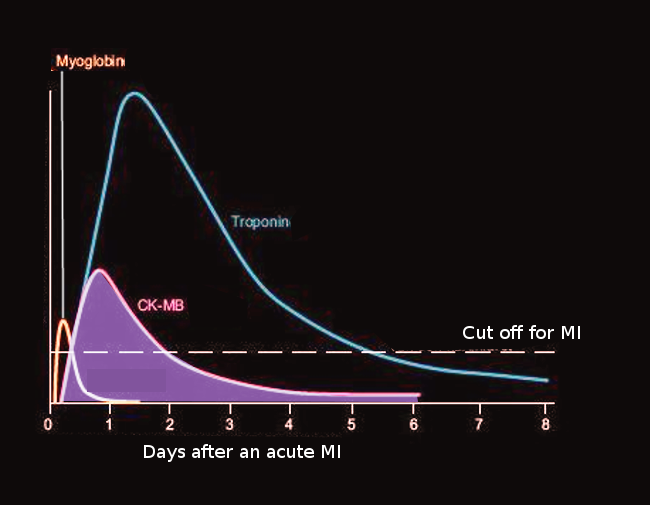