Coronary artery bypass grafting (CABG) is a major surgical operation where atheromatous blockages in a patient’s coronary arteries are bypassed with harvested venous or arterial conduits. The bypass restores blood flow to the ischemic myocardium which, in turn, restores function, viability, and relieves anginal symptoms. Almost 400,000 CABG surgeries are performed each year making it the most commonly performed major surgical procedure, but surgical trends have decreased as the use of alternative options such as medical treatment and percutaneous coronary intervention (PCI) have increased. This activity illustrates the indications for coronary artery bypass and highlights the role of the interprofessional team in the management of patients with CAD.

Coronary artery bypass grafting (CABG) is a major surgical operation where atheromatous blockages in a patient’s coronary arteries are bypassed with harvested venous or arterial conduits. The bypass restores blood flow to the ischemic myocardium which, in turn, restores function, viability, and relieves anginal symptoms. Almost 400,000 CABG surgeries are performed each year making it the most commonly performed major surgical procedure, but surgical trends have decreased as the use of alternative options such as medical treatment and percutaneous coronary intervention (PCI) have increased.[1]

In general, on-pump and off-pump are the 2 types of CABG surgical procedures with the difference being the use of a cardiopulmonary bypass circuit and an arrested heart to operate during an on-pump CABG. The conduits used as bypass grafts are routinely the left internal mammary artery (LIMA) and the saphenous vein grafts (SVG) out of the lower extremities. Other conduits that may be grafted include the right internal mammary artery (RIMA), the radial artery, and the gastroepiploic artery. The type and location of the grafts depend on the patient’s anatomy and the location of the arteries that are occluded. Typically, the LIMA is grafted to the left anterior descending (LAD) artery, and the other conduits are used for the other occluded arteries.[2]

Blockages in any of the coronary arteries cause a corresponding defect in myocardial perfusion, ischemia and if unrepaired can lead to permanent infarct or damage to the myocardium.

CABG is generally recommended when there are high-grade blockages in any of the major coronary arteries and/or percutaneous coronary intervention (PCI) has failed to clear the blockages. Class 1 recommendations from the 2011 ACCF/AHA guidelines are as follows[2]:

Contraindications to CABG include patient refusal, coronary arteries incompatible with grafting, and the absence of viable myocardium to graft.

The equipment necessary for this major surgical operation includes not only the equipment required for most other surgical procedures but also many specialized pieces of equipment, including the cardiopulmonary bypass machine with a heater-cooler device to warm and cool the blood.

The operation is performed by a specialized cardiovascular surgical team with extensive training and experience with taking care of these complex patients. The team consists of the cardiothoracic surgeon and their assistants, anesthesiologists, nurses, surgical technicians, and perfusionists.

In preparation for surgery, the patient will need several tests performed in addition to the coronary angiography that diagnosed the coronary artery disease. They will need laboratory tests completed such as complete blood count (CBC), metabolic panels including liver function tests, coagulation panels, and hemoglobin A1c. Other tests may be required including electrocardiogram (ECG), echocardiogram, carotid ultrasound, chest x-ray, and possibly a CT chest or vein mapping of the lower extremities.

Preoperative medications such as beta-blockers are most often continued throughout the perioperative period to prevent arrhythmias such as atrial fibrillation. Aspirin was previously withheld 5 to 7 days before surgery, but recently, it has been recommended to be started or continued preoperatively.

On admission to the hospital, the patient will have intravenous access started, and their medications and preoperative tests will be reviewed. The surgical sites will be trimmed of hair, and the patient will be given a chlorhexidine bath.

The procedure starts after the patient is in the operating room and attached to the standard monitors. An anesthesiologist may place an arterial line for invasive monitoring of the patient’s blood pressure before induction of general anesthesia. After general anesthesia is induced and the patient is intubated, a central line for venous access and a pulmonary artery catheter may be placed followed by insertion of a transesophageal echocardiography transducer. The patient is sterilely prepped and draped, and a time-out is performed before surgical incision. Median sternotomy is performed by the surgeon for preparation of takedown of the LIMA to use as a conduit. A trained assistant, usually a physician assistant, nurse first assistant, or another surgeon, simultaneously removes the saphenous vein from one or both legs using open or video-assisted techniques. After suitable conduits are acquired, the surgeon orders anticoagulation, most often heparin, given in preparation for cardiopulmonary bypass (CPB). The patient’s aorta and heart are centrally cannulated, and the tubing is attached to the cardiopulmonary bypass circuit. After starting CPB, the heart is arrested using high-potassium containing cardioplegia so the surgeon can anastomose the harvested conduits to the coronary arteries distal to the blockages. After the surgeon anastomoses the distal portions, the conduits are attached to new ostia created in the proximal aorta. Then the cardioplegia is washed out, the heart begins to contract, and the surgeon can check the grafts for both blood flow and competence as well as checking for bleeding from the anastomosis sites. After that, the chest is closed using sternal wires, and the patient is transferred to the intensive care unit for monitoring of hemodynamic stability and extubation.

The complications of CABG include stroke, wound infection, graft failure, renal failure, postoperative atrial fibrillation, and death.  The stroke rate of CABG has been reported at 1% to 2% depending on the characteristics of the patient and their risk factors for stroke including advanced age, prior stroke, aortic atherosclerosis, peripheral arterial disease, perioperative atrial fibrillation, and diabetes.[3]

Sternal wound infection rates are about 1% and are dependent on risk factors such as obesity, diabetes, chronic obstructive pulmonary disease (COPD), and prolonged duration of surgery.[2][4]

Saphenous vein graft (SVG) failure is most common within 30 days of operation and is dependent on several factors including vein size and excessive length, distal runoff and slow flow, and hypercoagulability and thrombosis. Rates of SVG failure up to 25% have been seen with repeat angiography after CABG.[2] Alternatively, arterial grafts such as the left internal mammary artery (LIMA) and radial arterial grafts remain patent longer and have patency rates exceeding 90% at 10 years.[2]

Atrial fibrillation within the first 5 days after CABG is relatively common with rates of 20% to 50% and is associated with increased morbidity with a higher risk of embolic stroke postoperatively as well as increased mortality. Preoperative treatment with beta-blockers and possibly amiodarone has been shown to be the most effective way to reduce the incidence of postoperative atrial fibrillation.[2]

The risk of perioperative death after CABG is dependent on co-morbidities, the urgency of the surgery, and the case-volume of the center where the operation takes place, ranging from 1% to 2%.[2]

Coronary artery bypass grafting requires a large, well-trained, and experienced team to help decrease the morbidity and mortality of the procedure and improve outcomes.  Studies have shown that improving communication, collaboration, and teamwork between team members can help to improve outcomes and increase patient safety.[6] 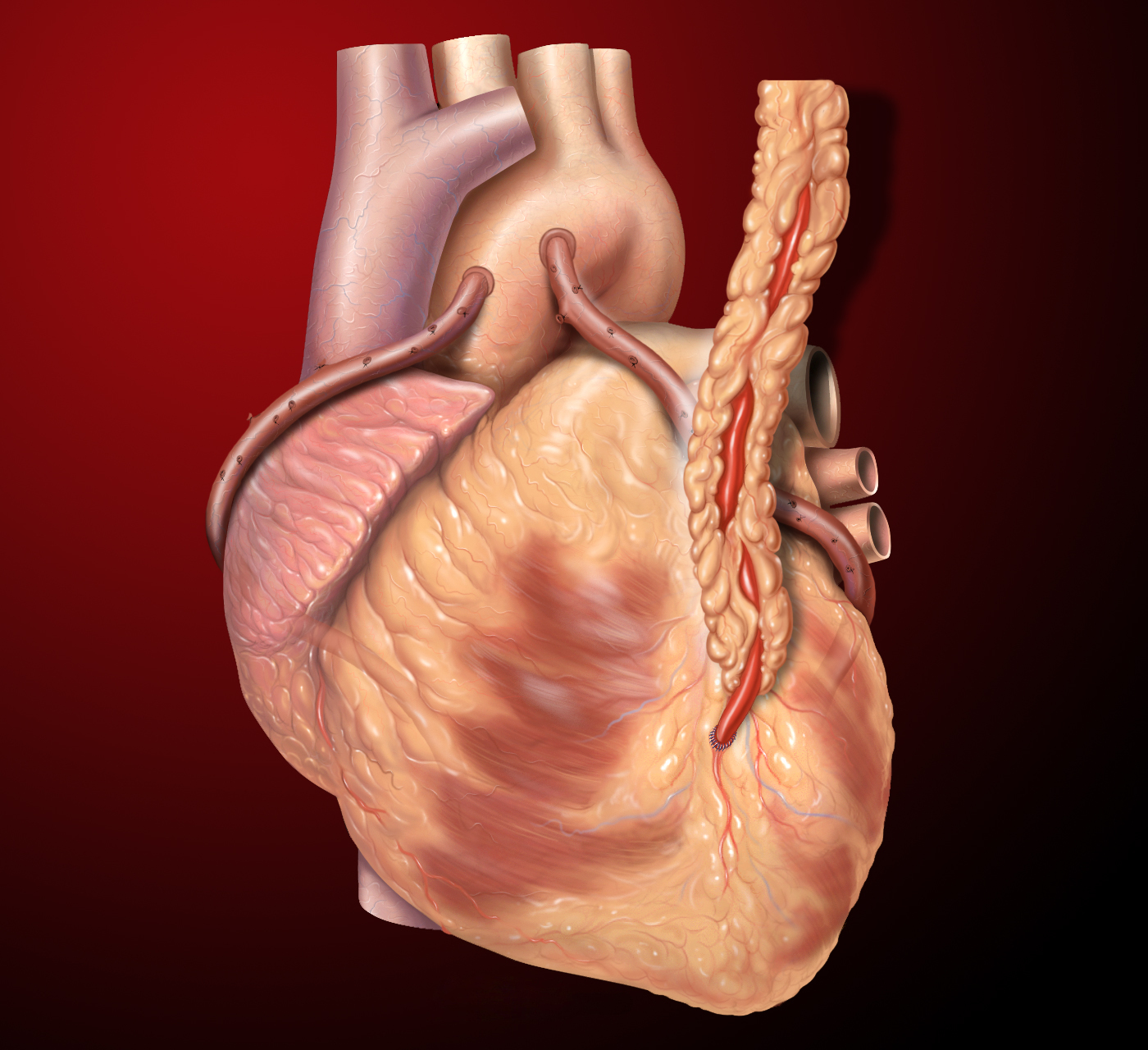