Cranial sutures are syndesmosis between the cranial bones. A syndesmosis is a fibrous joint between two bones. The coronal suture is oblique in direction and extends between the frontal and the parietal bones. The term is derived from the Latin word "corona" and from the Ancient Greek word "korone," both translating to “garland” or “crown,” referring to the anatomical location where a crown would be placed. It is one of the four major sutures of the skull alongside the metopic (also known as a frontal suture), sagittal, and lambdoid sutures.

The coronal suture extends cephalad (toward the apex of the skull) and meets the sagittal suture. This point is called the "bregma" and indicates the position of the anterior fontanel.

The coronal suture extends caudal (toward the base of the skull) to the pterion. The pterion is the area where four bones, the parietal, frontal bones, the greater wing of the sphenoid bone, and the squamous part of the temporal approach each other. Several minor sutures such as the sphenoparietal suture, sphenosquamous suture, sphenofrontal suture are at the pterion. The pterion is deemed the skull's weakest part.[1]

The coronal suture is a dense and fibrous association of connection tissue located in between the frontal and parietal bones of the skull. At birth, the sutures decrease in size (molding) and allow the skull to become smaller. In children, the suture enables the skull to expand with the rapidly growing brain. The suture will close and fuse around age 24.

The coronal suture is derived from the paraxial mesoderm, as are the sclerotome, myotome, syndotome, dermatome, and endothelial cells.

The coronal suture does not serve as a marker for any specific muscle groups; however, it is overlaid laterally by the temporalis muscle and superiorly by the epicranial aponeurotica.

Wormian bones are accessory bones within a suture, most commonly in the posteriorly positioned sutures. They are considered normal variants, but the presence of multiple wormian bones may indicate an underlying pathologic process.

Craniosynostosis is a condition where the sutures prematurely close. When the coronal suture closes prematurely, the condition is known as anterior plagiocephaly. When the lambdoidal suture closes prematurely, the condition is called posterior plagiocephaly. This term arises from the ancient Greek word “plagios,” meaning oblique or slanting. The premature closure of the sutures may occur unilaterally or bilaterally. Premature fusion of one of the coronal sutures may cause the skull to flatten on the affected side. This may lead to deviation of the superior orbital rim on the affected side. Radiographs of the skull may reveal the “harlequin eye deformity.”[2] This description is based on the eyes having exaggerated superior orbital margins. When both sides are prematurely closed, the head will develop a short and widen appearance. Craniosynostosis can cause problems with brain growth and head shape. The child’s physician will determine specific treatment; however, surgery is often recommended.[3] This premature closure of the coronal or lambdoidal suture must be differentiated from positional plagiocephaly resulting from external forces such as lying in one position for too long.[4] This type of plagiocephaly does not possess underlying suture dysfunction.[4]

The average age of coronal suture closure is 24 years; however, numerous diseases and factors may cause the dysfunction of a suture. The most common dysfunction is early closure or abnormal closure of a suture or group of sutures of the skull. Premature ossification of the sutures is referred to as craniosynostosis. Several types of craniosynostosis can develop, depending on which suture or combination of sutures have fused.

Trauma to the coronal suture may present in various manners, from lateral blows to the head to falls and superior impacts. Trauma to the region of the coronal suture and pterion is of great concern as both displaced cranial fractures and non-displaced fractures may result in an injury to the middle meningeal artery or one of its branches.[5][6][7]

The anterior division of the middle meningeal arch crosses or runs parallel to the coronal suture rising above the pterion. Trauma to this location is concerning for a life-threatening epidural hematoma, a bleed located between the dura mater (outer membrane covering the brain) and the inner table of the skull. An epidural hematoma may present with a “lucid interval,” during which the patient may display minimal symptoms. Diagnosis is typically made with a head CT or brain MRI. Imaging will most often reveal a convex hematoma along the inner table of the skull. The convex shape of the epidural hematoma is formed by the pressure required to strip the dura mater from the skull's inner table. This type of hematoma often requires neurosurgical consultation and intervention due to the arterial etiology. 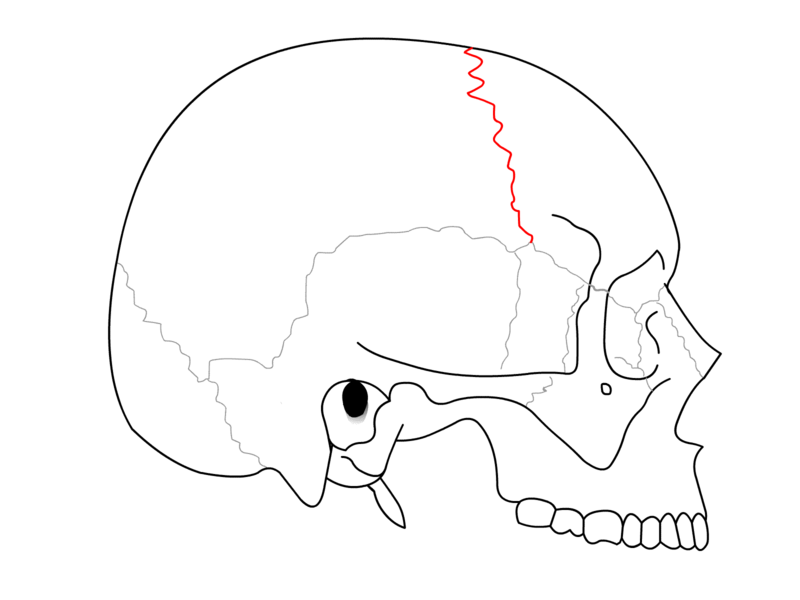 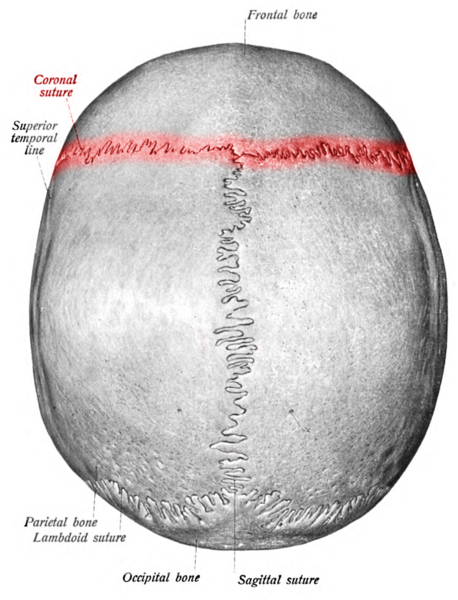