Clubfoot is a congenital deformity of the foot, otherwise known as congenital talipes equinovarus. It is one of the most common congenital malformations and is characterized across varying degrees and severity of predictable contractures manifesting with four main components: midfoot cavus, forefoot adductus, heel/hindfoot varus and hindfoot equinus. This activity educates the learner on the etiology, epidemiology, and evaluation of a patient with clubfoot. This activity will also discuss the gold standard of treatment via the Ponseti technique, as well as possible complications that can occur during treatment. It will stress the importance of the interprofessional team in the diagnosis and treatment of this condition.

Clubfoot demonstrates excellent success rates in correction and overall patient outcomes if recognized early and treated appropriately.  Thus, its recognition and diagnosis early on in the infant's life facilitate an ideal outcome long-term.

Although the exact etiology remains debated, the consensus favors multiple genetic and environmental risk factors that play varying levels of contributing roles in its clinical manifestations.[1]

Environmental factors such as maternal smoking and maternal diabetes have the strongest association with clubfoot.[2][3] Maternal alcohol consumption may also have an association.[4] Seasonal variation has also been described, with a possible causative theory being variation in maternal temperature during embryonic development.[5] In utero positioning has also been cited throughout the literature.[6][7]

Genetics likely has a role to play, although a specific gene alteration remains unclear. Research shows that 24.4% of cases have an associated family history, though it has not identified a definite mode of inheritance.[8] Studies of monozygotic twins have shown a concordance of 33% in comparison to 3% in dizygotic twins.[9] In 20% of cases, clubfoot presents in association with at least one of the following conditions[9]:

Approximately 7% of clubfoot cases will have another anomaly at birth, and 7.6% will have a neurodevelopmental condition of some degree.[10]

Clubfoot has a reported incidence of between 0.5 and 2 cases per 1000 births.[11] Certain ethnicities, such as the Hawaiians and Maori, demonstrate a predilection for higher prevalence rates, with the latter population cited at up to 6.8 per 1000 births.[12]

Males are twice as likely as females to be born with a clubfoot, and cases are bilateral in approximately 50% of cases. In unilateral cases, the right is most commonly affected.[13]

In clubfoot, the deformity predominantly exists in the tarsal bones, which are often in a position of maximal flexion and adduction. Clubfoot presentations vary from mild, postural forms to severe, rigid deformity.[14]

The talus is characteristically medially deviated and in plantarflexion, while the calcaneus is in varus and is rotated medially around the talus. The navicular and the cuboid are displaced medially.[15][16]

Clubfoot is often identifiable during routine intrauterine ultrasound of the fetus during the antenatal period. However, in countries without a prenatal ultrasound screening program, initial identification will usually occur at birth or during newborn screening.

During an examination of the foot, there are distinctive deformities associated with clubfoot. These include midfoot cavus, forefoot adductus, hindfoot varus as well as hindfoot equinus. These deformities may vary relative to the extent of deformity and their stiffness.

The above deformities are gradable to ascertain the severity of the clubfoot. Numerous scoring systems exist; however, the Pirani system is the most common system used, having demonstrated to be easily reproducible and reliable.[19]

The Pirani system involves assessing six separate parameters in the foot. Each parameter is individually scored 0, 0.5, or 1 depending on severity. This ranking gives a minimum score per foot of 0, and a maximum of 6. Three parameters involve the hindfoot, and three involve the midfoot.[20] The details are listed below:

Correct equinus deformity and assess crease over the posterior aspect of Achilles tendon.

Correct equinus as much as able with the knee in extension.

Curved lateral border of the foot:

The examiner holds a pen or other straight object along the lateral border of the calcaneus.

Lateral head of the talus:

Palpate head of the talus and passively correct the clubfoot deformity to feel if the:

A higher Pirani score at the beginning of treatment correlates with an increase in the number of casts required as well as an increased requirement for Achilles tenotomy. Therefore the scoring system can be used for counseling of the family, as well as for monitoring the progressive correction of the deformity.[20]

In unilateral cases, the affected foot is often smaller than the contralateral side, and the calf may appear underdeveloped.  In up to 80% of patients, clubfoot appears to be an isolated deformity, although in the other in 20% of cases, it may be seen in association with other conditions such as arthrogryposis or diastrophic dysplasia.

Clubfoot may be associated with specific syndromes and deformities; therefore, care is necessary to examine the baby comprehensively and appropriately. The clinician should direct particular attention to the back for evidence of spina bifida or myelomeningocele.

In syndromes affecting collagen such as arthrogryposis, a deformity may also be evident in other joints.[21] For example, Larsen syndrome can present in association with clubfoot patients.

Clubfoot deformity is usually identified either on prenatal ultrasound or on clinical evaluation at birth. Radiographs of the foot are of little benefit during the immediate postnatal period, as many of the tarsal bones will not have started ossification.

In older children with either a delayed presentation or incomplete correction, weight-bearing radiographs may help assess the severity of the residual deformity. AP films may show parallelism of the talus and calcaneus, with a talocalcaneal angle of fewer than 20 degrees. An AP film may also identify a negative talus-first metatarsal angle with the apex-lateral malalignment.

In patients where an underlying syndromic condition is suspected, then a genetic investigation may be appropriate.

Ponseti technique for correcting clubfoot deformity was developed in the 1940s and remained the gold standard for treatment.[23] This procedure involves two phases of treatment, the first being the serial casting of the foot, and the second is the maintenance of the correction. Casting should ideally begin in the first week or two following birth, but this technique can be used up to the age of 2 years.[24] Casts are changed every 5 to 7 days, and typically 5 to 9 casts are required depending on the stiffness of the foot. This process allows sufficient time for soft tissue remodeling.

Plaster of Paris is typically the substance used for casting as it is relatively cheap and easily moldable in comparison to other casting materials such as fiberglass. Casts need to extend above the knee, with approximately 110 degrees of flexion at the knee to prevent the cast from slipping.

Correction of the deformity needs to occur in a stepwise manner to sequentially correct the three-dimensional deformity. Following gentle manipulation, the first casting stage involves correcting the cavus by elevating the first metatarsal, which will adjust the alignment of the forefoot with the hindfoot.

Once the cavus has undergone sufficient correction, the next stage is the abduction of the forefoot around the talus. The head of the talus requires clinical identification via palpation to do this safely. Abduction of up to 60 degrees relative to the tibia may be possible with sequential casting. Through abduction of the forefoot, the hindfoot varus will also get corrected. Varus should not have correction attempted through direct pressure on the hindfoot. Pronation should also be avoided during the casting process as it may prevent the abduction of the calcaneus and recreate a cavus deformity.

Bracing is the second phase of treatment, which maintains the correction achieved. Ponseti protocol recommends abduction bracing with boot and bar, and this should commence immediately after the final cast. The patient should wear the brace should be worn 24 hours per day for the first three months, reducing to 12 hours at night with 2 to 4 hours during the day up to 4 years of age. The boot positioning should be shoulder-width apart, and the affected foot in 70 degrees of external rotation.

Compliance with bracing is crucial, and appropriate counseling and support are essential. With poor compliance, there are recurrence rates of up to 80% reported, in comparison to 6% in those who are compliant.[24] Close observation is required, and if there is evidence of early recurrence, then a further period of casting should commence.

Surgical intervention may be required those with residual deformities or recurrent relapses. Tibialis anterior transfer is indicated if the child is over 30 months old and develops dynamic supination. Tibialis anterior may overpower the weakened personals, and its transfer to the lateral cuneiform aims to balance the foot. Its transfer is necessary in approximately 20% of cases.[26] Additional procedures, such as open Achilles lengthening, may also be required.

Other congenital foot deformities include calcaneovalgus foot and congenital vertical talus. However, in both of these conditions, the foot appears to be in dorsiflexion rather than equinus with cavus.

An equinovarus foot may appear like an untreated clubfoot, but is not present at birth and often develops secondary to a neuromuscular condition such as cerebral palsy or spina bifida.

The Ponseti method has a reported initial correction rate of 98%.[27] Approximately 80% of patients will require percutaneous Achilles tenotomy at the end of their casting, and approximately 20% will require an anterior tibialis transfer.[26][28]

Long term studies of patients treated for idiopathic clubfoot via the Ponseti method have reported good or excellent outcomes in 78% of patients.[29] Patients may have a foot that is 1 to 2 sizes smaller than the unaffected side in unilateral cases.

The most common complication associated with clubfoot treatment is recurrence. This complication predominantly occurs due to compliance during the maintenance period with boot and bars. Inadequate compliance may result in up to an 80% recurrence rate.[24] It is, therefore, crucial to appropriately counsel and educate families from an early stage and ensure that appropriate support is available.

When surgical intervention is required, additional risk factors such as infection and damage to surrounding structures come in to play. Aggressive surgical intervention such as extensive soft tissue release should be avoided where possible as this may also lead to the long term development of arthritis, overcorrection, mechanical weakness, and even avascular necrosis.[30]

As mentioned previously, appropriate family education and counseling are crucial to achieving compliance and good long term results. Families need to be aware from the start that treatment via the Ponseti technique is likely to be a 4 to 5-year commitment, but long term results are excellent if compliant. Failure to comply is likely to lead to further periods of casting and surgical intervention.

Clubfoot can be a challenging but rewarding condition to manage. An interprofessional team approach is crucial to ensure good outcomes are achievable. This team typically includes neonatologists, primary care providers, physiotherapists, orthopedic surgeons, orthopedic nurses, plaster technicians, play therapists, and orthotic providers. Clinics must provide the necessary cast changes on at least a weekly basis, as well as give appropriate support to patients and families in case any difficulties occur. Orthopedic nurses often assist with casting, encourage follow up, educate families, and inform the rest of the team of significant issues. The interprofessional team paradigm, using open communication and collaboration, will result in optimal outcomes for patients with clubfoot. [Level 5] 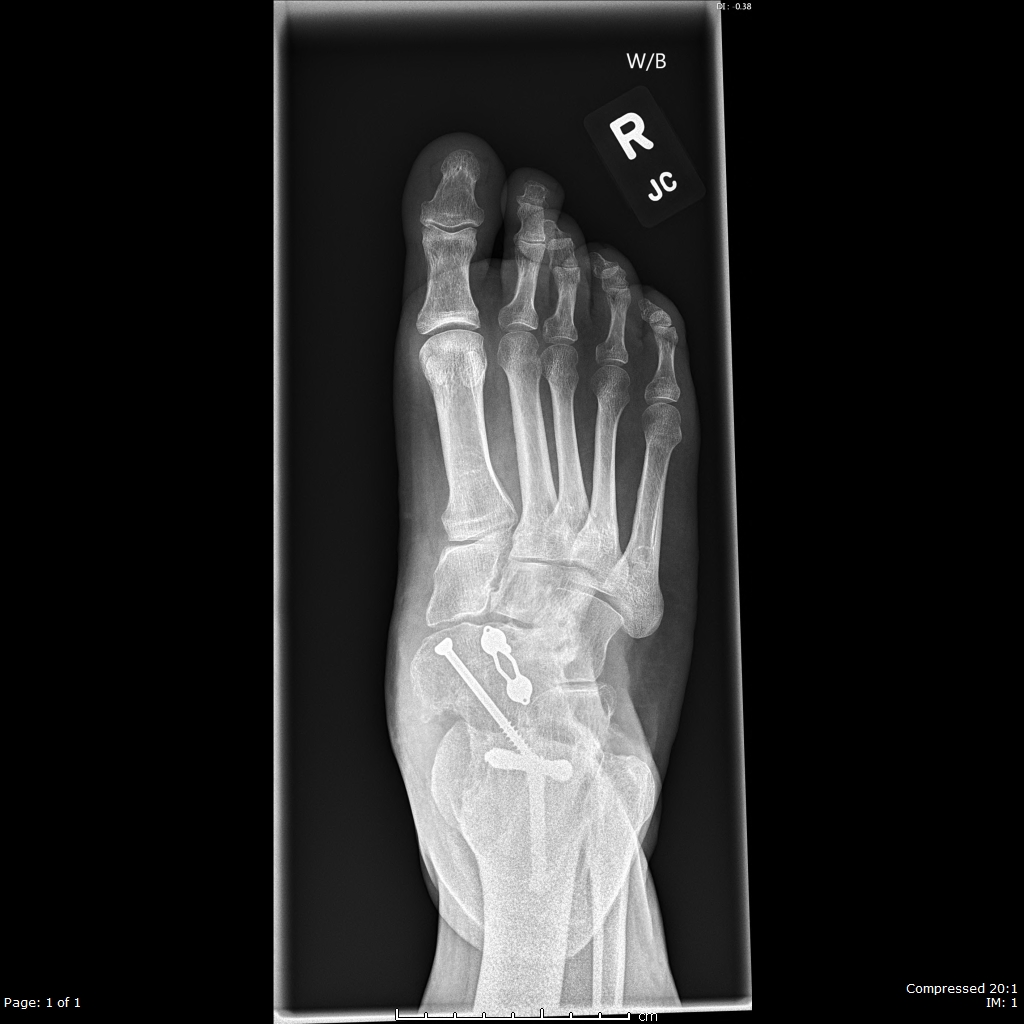 Dyer PJ,Davis N, The role of the Pirani scoring system in the management of club foot by the Ponseti method. The Journal of bone and joint surgery. British volume. 2006 Aug;     [PubMed PMID: 16877610]