Clostridium botulinum is an anaerobic gram-positive spore-forming rod and is the most common cause implicated in reversible flaccid paralysis. Other clostridial bacteria can also produce the toxin leading to botulism. Despite its potential fatality and rarity, the illness can masquerade as other illnesses making diagnosis difficult. Toxicity is detectable on the rat SMG-C6 cell line. This activity reviews, evaluation, and management of clostridial infections and highlight the role of the interprofessional team in managing patients with this condition.

The genus Clostridium is among the largest bacterial genera comprising of about 180 species.[1] The more common clinically relevant Clostridium species are Clostridium botulinum, which causes botulism; Clostridium perfringens, which causes food poisoning, gas gangrene, and necrotizing fasciitis; Clostridium tetani which cause tetanus and Clostridium sordellii which causes fatal infections after medical abortions. Here we will be reviewing the Clostridium botulinum organism, which is an anaerobic gram-positive spore-forming rod and is the most common cause implicated in reversible flaccid paralysis. Other clostridial bacteria can also produce the toxin leading to botulism. Despite its potential fatality and rarity, the illness can masquerade as other illnesses making the diagnosis difficult. Several studies show that the secretion of the submandibular gland (SMG) inhibited by botulinum toxin A (BTXA). Toxicity is detectable on the rat SMG-C6 cell line.[2]

The Centre for Disease Control and Prevention (CDC) has been monitoring cases of botulism in the United States since 1973. From years 2011 through 2015, an average of 162 annual cases were reported. These primarily included infant botulism at 71% to 88%, followed by foodborne botulism, wound botulism, and botulism of unknown origin. Except for rare, large outbreaks, the total number of botulism cases has remained relatively stable over the past ten years.[4][5]

Mortality from botulism is low. The mortality rate had decreased significantly from over 60% in the 1950s to a mere 3% in 2009. Most deaths reported are due to botulism of unknown origin, followed by foodborne, wound, and infant botulism (less than 1%).[6]

C. botulinum is non-invasive. Its pathogenesis is due to the production of potent neurotoxin 'botulinum toxin' (BT), probably the most toxic substance known to be lethal to humankind. The botulinum neurotoxin is the most potent toxin known till now, with as little as 30-100 ng potentially fatal.[7]

BT is a zinc-dependent protein of 150 kDa (100 kDa heavy chain and a 50 kDa light chain). Eight types of C. botulinum strains have been identified (A, B, C1, C2, D, E, F, and G ) based on the immunological differences in the toxins produced by them. All serotypes produce neurotoxin, except C2, which produces an enterotoxin.[8] BT types C and D are bacteriophage coded. BT differs from other exotoxins, as it gets produced intracellularly, not secreted, and appears outside only after the autolysis of the bacterial cell. The toxin is synthesized initially as a nontoxic protoxin. It requires trypsin or other proteolytic enzymes to convert it into an active form.

As BT produces flaccid paralysis, it can be used therapeutically for the treatment of spasmodic conditions such as strabismus, blepharospasm, and myoclonus.[8] Botulinum toxin also gets produced by other clostridia such as C. butyricum, C. baratti, and C. argentinense.

Recovery: Blocking of acetylcholine release is permanent, but the action is short-lasting as the recovery occurs in 2 to 4 months once the new terminal axons sprout. Spores do not produce toxins. Toxin production, therefore, requires spore germination, which occurs in an anaerobic atmosphere. Spores do not normally germinate in the adult intestine; however, they may germinate in the intestine of infants.

After entry, botulism toxin gets transported to the cholinergic nerve endings via the blood. It does not affect the central nervous system. BT binds to the acetylcholine receptors on the neuromuscular junctions, resulting in blockage of the release of the neurotransmitter leading to flaccid paralysis.

The manifestations of botulism are due to a decrease in the availability of acetylcholine in the cranial nerve and parasympathetic nerve terminals. Common symptoms include:

It results from the consumption of foods contaminated with preformed botulinum toxin. The most common source is homemade canned food. Most cases are sporadic; outbreaks are rare.

It results from contamination of wounds with C. botulinum spores. It presents like foodborne botulism except for the absence of gastrointestinal features.

It results from the ingestion of contaminated food (usually honey) with spores of C. botulinum in children of 1 year of age. Spores germinate, releasing the toxin. Manifestations include the inability to suck and swallow, weakened voice, ptosis, floppy neck, and extreme weakness and hence referred to as 'floppy baby syndrome.' It is a self-limiting condition, managed by supportive care and assisted feeding. However, rarely it can progress to generalized flaccidity, respiratory failure, and sudden death.

It results from the injection of an overdose of toxin while used for therapeutic purposes.

The diagnosis of botulism includes isolation of the bacilli and demonstration of the toxin.

Isolation of the Bacilli

• Specimens get injected into a mouse that develops paralysis in 48 hours, which can be inhibited by prior administration of specific antitoxin.

• The sensitivity of the mouse bioassay varies inversely with the time elapsed between the onset of symptoms and sample collection.[10]

The conditions which can mimic Clostridium botulism are as follows:

Diseases caused by clostridial bacteria have a good prognosis if the patient is diagnosed and treated in time.

Proper canning is a strong recommendation; Advise on heating all canned food before consumption can prevent the adult form of botulism. Refraining from using honey for kids under two years of age can be considered to avoid infant botulism.

As most cases of botulism follow the consumption of inadequately canned or preserved food, control is achievable by proper canning and preservation. When an outbreak occurs, a prophylactic dose of antitoxin should be given intramuscularly to all who consumed the food article.

Active immunization has demonstrated to be effective. If immunization is needed, as in laboratory workers exposed to the risks, two injections of aluminum sulfate adsorbed toxoids may be given at an interval of ten weeks, followed by a booster a year later. Antitoxin may be tried for treatment. Polyvalent antiserum to types A, B, and E may be administered as soon as arriving at a clinical diagnosis. Supportive therapy with the maintenance of respiration is of equal or great importance.

An investigational pentavalent botulinum toxoid is available for the people at elevated risk for BoNT exposure, such as laboratory workers and military personnel. No FDA-approved vaccine exists for the general public. The pentavalent toxoid is not under consideration for public use due to cost, the number of required vaccinations, and the recent decline in immunogenicity. 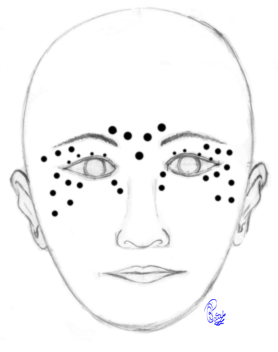 Botulinum toxin injections for blepharospasm may be administered at some or all of the sites shown. The dose will vary from point-to-point, depending upon the severity of the blepharospasm and apraxia of eyelid opening. The pretarsal injections are administered to counter the apraxia of eyelid opening. The injections just lateral to the lateral nasal wall are to reduce the squeezing of the nasalis muscle which is seen in some patients. Injections into the corrugator and procerus muscles reduce the downward movement of the brow and therefore the eyelids. Injections just below the brows will allow a chemical lift to the brows, thereby improving the ability to open the eyelids. One must be careful to injected a minimal amount over the zygomaticus major and minor muscles so as to avoid the appearance of a lower facial weakness after injections.
Contributed by Professor Bhupendra C. K. Patel MD, FRCS

Dickson EC,Shevky E, BOTULISM. STUDIES ON THE MANNER IN WHICH THE TOXIN OF CLOSTRIDIUM BOTULINUM ACTS UPON THE BODY : II. THE EFFECT UPON THE VOLUNTARY NERVOUS SYSTEM. The Journal of experimental medicine. 1923 Sep 30;     [PubMed PMID: 19868794]