Chondrosarcomas are malignant cartilaginous neoplasms with diverse morphological features and clinical behavior. They account for about 20 percent of all primary malignant tumors of the bone and usually arise in the pelvis or long bones. Primary or conventional chondrosarcoma arises in preexisting normal bone and is distinguished from the rarer secondary tumors, which occur within a preexisting enchondroma or osteochondroma. This activity reviews chondrosarcomas and the role of the interprofessional team in recognition and management of this condition.

Primary central chondrosarcoma is the third most common primary malignancy of bone after myeloma and osteosarcoma. Chondrosarcoma is a tumor of adulthood and older age. The majority of patients are older than 50 years of age at diagnosis, with a slight male predominance [4]. The most common locations of involvement of chondrosarcoma include the bones of the axial skeleton (pelvis, scapula, sternum, and ribs) followed by the proximal femur and proximal humerus [1]. Involvement of the hands and feet is rare.

Chondrosarcomas are large tumors, usually greater than 4 cm in size [5]. They have a translucent lobular, blue-grey, or white cut surface corresponding to the presence of hyaline cartilage. There may be areas containing myxoid or mucoid material and cystic changes. Yellow-white chalky areas of calcium deposit are commonly present (mineralization). Erosion and destruction into soft tissue may be seen.

Chondrosarcomas show abundant blue-grey cartilage matrix-production. Irregularly shaped lobules of cartilage varying in size and shape are present. Fibrous bands separate these lobules or permeate bony trabeculae. Calcified areas suggesting the presence of a pre-existing enchondroma can often be found. The chondrocytes are atypical, with variable size and shape and contain enlarged hyperchromatic nuclei. Binucleation is frequently seen. Chondroid matrix liquefaction or myxoid changes are a common feature of chondrosarcomas. Necrosis and mitoses can be seen. There is often permeation into the cortical bone and the marrow space with entrapment of bony trabeculae [5].

Grading of chondrosarcomas is essential and is useful in predicting histological behavior. Chondrosarcomas are divided into three grades based upon their histopathology:

Only a small percentage of the IDH1 mutations (20%) can be identified using a specific IDH1 R132H antibody.

Local swelling and pain are the most common presenting symptoms. The symptoms are usually of long duration (months to years). Tumors located in the skull base can cause neurological symptoms.

Plain radiography is used for initial evaluation. Plain x-rays allow the identification of the cartilaginous nature and the aggressiveness of the lesion [6]. Plain x-rays may reveal the following findings:

In typical forms, MRI demonstrates a lobulated lesion with a high-signal intensity on T2 and a low or intermediate signal on T1-weighted images [7] [6].

Tissue biopsy is essential to diagnose chondrosarcoma and differentiate it from other malignant or benign bone tumors. Biopsy should be taken from the most aggressive portion of cancer as determined by imaging.

Tumors with intraarticular or soft tissue involvement, larger tumors, axial or pelvic tumors must be treated with wide excision. For the intermediate or high-grade chondrosarcoma, wide en bloc excision is the surgical approach of choice [9].

Chemotherapy is generally not efficient in conventional chondrosarcoma. However, it may have a role in dedifferentiated chondrosarcomas containing a high-grade spindle cell component [10].

After incomplete resection of high-risk chondrosarcomas, radiation therapy is indicated to improve the high local failure rates. These indications include locally recurrent tumors intermediate to high-grade tumors, and tumors in locations where surgical resection is challenging or limited. Definitive radiation can also be indicated for unresectable tumors [11].

Recurrence of the tumor

Patients and their families need to be educated on how to recognize the early signs and symptom of bone tumors. Patients with signs of bone pain, swelling of bones or joints, any palpable mass found on the bones, should seek early intervention. Treatment of chondrosarcoma is mainly surgical. Local recurrence can occur after surgery, so long term follow-up is recommended to monitor these patients closely.

Chondrosarcoma is ideally managed by an interprofessional team that consists of orthopedists, radiologists, surgical oncologists, oncologists, pathologists, and specialty care nurses. Correlation between gross, radiographic, and microscopic features of the lesion is crucial to establish the definitive diagnosis of chondrosarcoma. Postoperatively, patients require long term follow-up due to the possibility of tumor recurrence and distant metastases. The prognosis for patients with low-grade disease is excellent. Pharmacists review medications, check for drug-drug interactions, and provide patient education. Specialty care nurses in perianesthesia, operating room, orthopedics, and oncology are involved in monitoring patients, educating patients and their families, and providing updates to the team about the patient's condition. Thereby the team can improve outcomes for this condition. [Level 5] 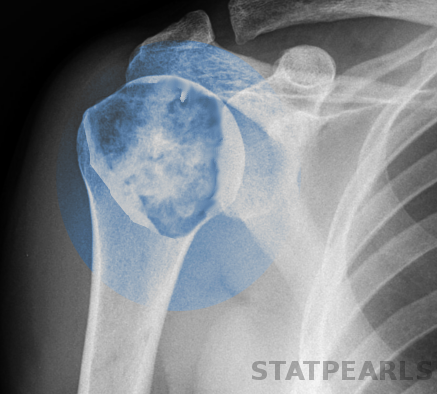