Cerebral autoregulation is a term which was first used to describe the physiologic response that keeps cerebral blood flow relatively constant between a mean arterial pressure of ~ 60 to 150 mmHg. There are generally thought to be four general mechanisms behind cerebral autoregulation including neurogenic, metabolic, endothelial, and myogenic. Even though there are multiple different mechanisms at play, each of these systems is intertwined intricately to help with cerebral blood flow.[1]

Endothelial control of CBF involves the production of nitric oxide and adenosine by endothelial cells in the cerebral vasculature generally during episodes of hypoxia to allow additional vasodilation of arteries.[2]

One of the primary methods of control for CBF is changes in arterial blood gases which include changes in PaCO2 and PaO2. We know that CBF is affected by hypoxia but only when PaO2 reaches around 50 mmHg or lower. Otherwise, the control is generally dependent on hypercapnia or increases in PaCO2 where hypercapnia causes vasodilation, and hypocapnia causes vasoconstriction. The entire vasculature of the brain is reactive to changes in arterial blood gases and can constrict or dilate in response. However, the main area for resistance modulation is the pial arterioles.  Larger arteries such as the ICA and vertebral arteries can also serve as a location for resistance changes even before the pial arterioles need to react. Because all of the differently sized vasculatures of the brain can respond to changes in arterial blood gases, CBF is well controlled.[2]

Another method for control of CBF is by the production of metabolic products in areas of the brain that have increased regional activity. Through the production of local metabolites and release of excitatory/inhibitory neurotransmitters by astrocytes at terminals near arterioles, we see increases in CBF to those areas.[2]  Recent studies have shown that capillary pericytes which surround the capillary and control capillary lumen size are indeed the first to change diameter size (even before arterioles) to accommodate an increase in CBF. The pericytes dilation is thought to take place via the release of prostaglandin E2 as well as nitric oxide production to suppress synthesis of factors which induce pericytes constriction.[4] One difference between the metabolic control seen with increased neuronal activity and arterial blood gases is that in increased neuronal activity we a see regional increase in CBF (to the area that is more active) whereas arterial blood gas changes alter CBF throughout the brain.[5]

The blood supply to the brain is primarily by the two internal carotid arteries (ICA) and two vertebral arteries which anastomose together to form the circle of Willis.[7][8] The circle of Willis is comprised of the following vessels[8]:

The ICA and its branches of the ACA and middle cerebral artery (MCA) are part of the anterior circulation of the brain while the PCA is the posterior circulation. The areas where the posterior and anterior circulation anastomoses together (connections between MCA, PCA, and ACA) are termed watershed areas because they are at risk of hypo-perfusion during episodes of hypotension.[7] The two MCA of the brain supplies the lateral hemispheres which include the motor and somatosensory cortex specifically that which controls and receives signals from the face, trunk and upper limbs. Small perforating arteries from the MCA supply the basal ganglia and internal capsule in addition to Wernicke’s and Broca’s.[9] The ACA generally supplies the medical aspect of the cerebral hemispheres which include the motor and somatosensory portions of the lower extremity.

Recent evidence supports information that the lymphatic vessels are supported by both the vagal cholinergic (parasympathetic in this case) and sympathetic nervous system, capable of modulating the contraction (peristalsis, also aided by the breath and the pulsatility of the arterial vessels). There are vessels with contractile fibers (with an actin-like protein). Probably, the presence of both parasympathetic and sympathetic systems would function not only as a vessel voltage modulator but also as sensors of the contractile state of the vessel itself.

The dural system has a lymphatic system, called the glymphatic system. The liquor is drained not only by the known venous route but also through the lymphatic pathways. Lymphatic vessels only affect the dura mater, supporting the venous and arterial pathways of the brain; in particular, they come out of the skull following the inverse path of the pterygopalatine artery and a branch of the internal carotid, along with the venous pathways outside the skull and the cranial nerves that exit the skull.

The lymphatic system is subject to aging, losing its elasticity, and creating "aneurysms" over time, or decreasing the number of vessels.

The tCBF decreases by approximately 2.6mL/min per year as patients become older irrelevant of whether the cerebrovascular disease exists or not, as shown by recent studies.[12] However, no differences were seen between men and female in terms of total CBF.[13]

If examination reveals a patient to have a dissecting aneurysm and the parent artery needs to be sacrificed (via either surgical clip or endovascular embolization) to treat the patient, establishing hemodynamic stability of cerebral blood flow is the priority.[14] A flexible microballoon catheter should be inserted to the site of an aneurysm and inflated such as to cut blood flow through that artery. Using high-quality digital subtraction angiography (DSA) contrast should be injected into the contralateral carotid artery and the arterial, capillary, and venous phase should be monitored to see that contrast is seen in a timely manner within all the arteries thus showing that cerebral blood flow is adequate through the anastomoses that exist. This would show that even after sacrificing the parent artery, blood flow through the brain would be more than enough to keep the brain functioning at its normal level.[15]

The understanding of CBF is critical especially in patients who have suffered strokes and have cerebral vascular disease. Patients who have suffered ischemic strokes have a better prognosis if there is adequate flow through collaterals to supply the affected region. If the normal distribution through individual arteries is known then abnormal distribution through collaterals and normal perfusion would indicate that this patient is using circulation which is not ordinarily present.[11]

Patients who suffer intracerebral hemorrhages (ICH) or subarachnoid hemorrhages (SAH) have intact cerebral autoregulation at first to protect the brain but can eventually lead to secondary dysfunction. Often with ICH or SAH, there is an increase in intracranial pressure which leads to a reflex decrease in CBF. However secondary brain injury from these hemorrhages degenerative changes next to hematoma formation, as well as edema can further lead to increases in intracranial pressure and potentially lead to a global decrease in CBF.[16]

Hypertensive patients were found to have reduced CBF because of the higher pressure gradients exerted on the vessel walls.  Hypertension is known to cause smooth muscle hypertrophy and vascular remodeling in arterioles leading to decreased lumen size, thus potentially permanently reducing CBF. However the use of anti-hypertensive medication, those of which specifically reserve or decrease vascular remodeling (like ACE inhibitors or hydralazine) can restore some of the lost CBF to hypertensive patients.[17] 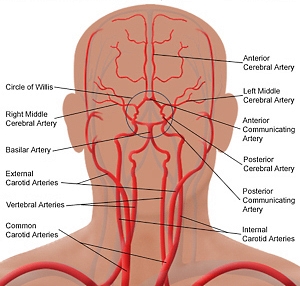