A cerebellar infarct (or cerebellar stroke) is a type of cerebrovascular event involving the posterior cranial fossa, specifically the cerebellum. Impaired perfusion reduces oxygen delivery and causes deficits in motor and balance control. In the case of hemorrhagic events, bleeding can directly damage tissue and worsen these deficits. Of all brain strokes, Cerebellar strokes account for 1% - 4%. This activity reviews the workup of cerebellar infarct and describes the role of health professionals working together to manage this condition.

A cerebellar infarct (or cerebellar stroke) is a type of cerebrovascular event involving the posterior cranial fossa, specifically the cerebellum. Impaired perfusion reduces oxygen delivery and causes deficits in motor and balance control. In the case of hemorrhagic events, bleeding can directly damage tissue and worsen these deficits. While comprising a small fraction of strokes, cerebellar strokes are responsible for a disproportionate share of morbidity and mortality due to their sometimes subtle initial presentation and the adverse effects of reactive swelling in the posterior fossa. Of all brain strokes, Cerebellar strokes account for 1% - 4%.[1][2]

Like all strokes, cerebellar infarcts are roughly divided into ischemic and hemorrhagic events. Ischemic strokes are caused by arterial obstructions that impair blood and oxygen delivery directly. These can be further subdivided by the source of the obstruction in the blood vessel, either through migration from the heart or directly at the vasculature. The thrombotic phenomenon can occur in large or small vessels, and thromboembolic can travel from large to small vessels. These can be due to atherosclerosis or other vasculopathies, including arterial dissections, typically of the vertebral arteries in cerebellar strokes.[3][4] Emboli that originate from the heart occur due to pump failure, or due to irregular heart rhythm that disrupts smooth blood transit through the heart as in atrial fibrillation or atrial flutter. Emboli can also disseminate from the venous circulation in the presence of a right-to-left shunt such as a patent foramen ovale. Cerebral venous thrombosis can cause obstructed venous outflow resulting in infarction or hemorrhage.

In contrast to ischemic strokes, hemorrhagic strokes are usually caused by arterial bleeding that directly damages brain tissue or obstructs vascular flow through elevated local pressure. These usually occur spontaneously, especially in patients with long-standing hypertension or those taking anticoagulants or antiplatelet agents. Secondary hemorrhagic conversion can also occur from ischemic infarcts, as well as from damaged tissue due to tumor or trauma. Finally, subdural hematomas, which usually stem from tears in bridging veins between the dura and arachnoid mater, can lead to focal neurologic deficits.

Cerebellar infarcts represent only about 2% of all strokes, but they account for a disproportionate share of resulting morbidity and mortality. In one study of almost 2000 consecutive stroke patients, cerebellar strokes had nearly twice the mortality rate (23%) of more common cerebral strokes (12.5%), with brainstem strokes falling in between (17%).[5]

Reactive cerebral edema surrounding the territory of an initial infarct can be especially problematic as it evolves in the case of cerebellar strokes. The cerebellum sits in the relatively tight cranial space of the posterior cranial fossa, between the tentorium cerebelli above it and the occipital bone behind and beside it, with the foramen magnum below and the fourth ventricle and brainstem in front. Swelling can lead to upward transtentorial herniation of the cerebellar vermis to relieve the rising intracranial pressure. Alternatively, edema can also obstruct the fourth ventricle and aqueducts anteriorly, causing direct brainstem compression. Since intracranial pressure builds from the choroid plexus superiorly where cerebrospinal fluid is synthesized and transmitted downwards through the remainder of the brain, obstructing the fourth ventricle can thus also create tremendous downward pressure and lead to disastrous herniation of the cerebellar tonsils into the foramen magnum.

Presenting symptoms of a cerebellar infarction are often nonspecific and overlap with other neurologic, cardiovascular, gastrointestinal, and systemic conditions. Particular attention paid to thoracic, abdominal, and systemic complaints and findings can lessen concern for other immediate life-threatening conditions such as trauma, aortic dissection, acute coronary syndrome, pulmonary embolism, hypovolemia, or sepsis. Other common misdiagnoses include vestibular neuronitis, migraine, syncope (potentially due to orthostasis or arrhythmia), hypertensive emergency, renal failure, hypoglycemia, and ethanol or drug intoxication. As with other strokes, historical features guide risk stratification and treatment planning.

The time of onset and progression of symptoms can be particularly helpful along with provoking and mitigating factors in the determination of cerebellar strokes and differential diagnoses. As a general rule, symptoms starting over seconds to minutes are attributable to benign paroxysmal positional vertigo (BPPV), vasovagal syncope, or arrhythmia. Symptoms starting over minutes to hours are often due to hypoglycemia, migraine, or psychological causes. Finally, symptoms starting over hours to days are attributable to labyrinthitis or medication side effects but are also suspicious for cerebellar infarct. Even longer-lasting symptoms can be concerning for a growing posterior fossa mass. Symptoms triggered by loud noises can point towards peripheral inner ear disease, those extinguished by eye closing can point towards an ophthalmologic cause, those arising from changes in body posture (as opposed to head movement) can point towards a cardiovascular condition, but those triggered by walking are most suspicious for a cerebellar infarct. Risk factors for vascular disease such as age, smoking, obesity, diabetes, hyperlipidemia, and hypertension can increase concern for cerebellar infarcts as well.

Commonly, about 75% of patients will report "dizziness" of some form, with a sensation of vertigo or of falling towards one side. Many patients will complain they cannot walk or can do so only with difficulty, either due to ataxia or to focal or systemic "weakness." More than 50% report nausea or vomiting. Most often symptoms are more severe than examination findings. These neurologic findings can include localizing signs such as truncal or limb ataxia, cranial nerve defects such as diplopia or nystagmus (often direction-changing or gaze-evoked, more worrying if vertical or torsional), and dysarthria. In contrast to cerebral strokes, these are usually ipsilesional (occurring on the same side of the patient as the cerebellar stroke). For patients with larger strokes or with advanced features of elevated intracranial pressure or brainstem compression, patients can present simply with lethargy, frank coma, or cardiovascular collapse, each of which portends a poor outcome.

In some cases, as the symptoms are non-specific usually the diagnosis of cerebellar stroke is missed. The presentation mainly depends on the location and extent of the lesion. So, a thorough history and neurological exam are key to diagnose the cerebellar lesions.

Magnetic resonance imaging (MRI) with diffusion-weighted imaging (DWI) of the brain represents the gold standard test for cerebellar infarction. This can visualize both poor perfusion and signs of tissue injury. Also, magnetic resonance angiography (MRA) can localize a vascular obstruction and guide endovascular treatment in the presence of large vessel occlusion, which can be particularly helpful in cases of basilar artery occlusion. Unenhanced computed tomography (CT) imaging can be helpful to assess for hemorrhagic lesions and can occasionally demonstrate findings suggestive of infarction. However, it is greatly hampered by the radiopaque temporal and occipital bones that surround the cerebellum, and thus has limited resolution, sensitivity, and specificity compared with other areas of the brain. It is nevertheless usually performed initially, in part to assess for other causes, but also because it is often much more readily available than MRI or MRA. If MRI is not available, enhanced CT angiogram and perfusion imaging can be helpful in its place. Apart from a standard bedside neurological exam, the oculomotor "HINTS" exam (Head Impulse, Nystagmus, and Test of Skew) can be helpful to rule-in peripheral vertigo or suggest cerebellar infarction if the included "alternate eye cover test" shows skew deviation.[7][8] Laboratory, electrocardiographic, echocardiographic, and electroencephalographic evaluation for other systemic conditions can be obtained to assist with the management of concurrent medical or surgical management.

Cerebellar infarcts are treated largely like other ischemic cerebrovascular accidents. Patients with acute events having a clear time of onset within 4.5 hours may be candidates for thrombolysis with recombinant tissue plasminogen activator (rtPA). However, given the difficulty of diagnosing posterior infarcts, this is often not possible. As with other strokes, thrombectomy can be an option. Since structures in the posterior circulation may have greater white matter content[9] and collateral flow, they are thought to have a stronger tolerance to ischemia and hypoxia than those in the forebrain. Especially in larger basilar artery occlusion, thrombectomy is often considered outside of the usual 6 hour time window, and posterior infarcts are considered amenable to even delayed reperfusion therapy.[10] Brain imaging showing a large difference or “mismatch” between the volume of brain infarcted and the area of decreased perfusion or a high degree of collateral circulation may prompt more emergent thrombectomy. When reperfusion is not an option, aspirin therapy and possibly another antiplatelet agent such as clopidogrel are indicated, with the possible addition of anticoagulation therapy in patients with embolic events. Reactive cerebral edema typically worsens over 3 to 4 days after the initial infarct and if causing worsening neurological symptoms, mandates admission to a neurologic intensive care setting for monitoring. Underlying preventable causes of the infarct are usually investigated during admission. Cardiac monitoring can demonstrate atrial fibrillation or other arrhythmias, echocardiography can reveal a patent foramen ovale or ventricular dysfunction, and blood testing can reveal diabetes mellitus or hyperlipidemia.

Cerebellar strokes after day one develop progressive edema and subsequent herniation. So, it is very important to admit these patients to ICU and monitor them very closely. The earliest symptoms are severe headache, altered mental status, vomiting, and drowsiness. Large strokes with significant cerebral edema, especially if the intracranial pressure is elevated, often require extraventricular drains, ventriculostomy, or decompressive sub-occipital craniotomy. Neurosurgical removal of infarcted tissue or hematoma is also occasionally necessary. In these cases, rapidly reversible agents such as intravenous heparin should be used. In the acute setting, mannitol, hypertonic saline, or hyperventilation can also be helpful to temporarily reduce intracranial pressure.

The differential diagnosis for cerebellar infarction is broad and includes:

Delayed diagnosis and treatment can result in cerebral edema and the eventual death of the patient. Most patients, with timely treatment and diagnosis fair well with functional debility as the primary complication. Cerebellar infarction, like other stroke syndromes, is associated with acute complications of hospitalization such as venous thromboembolism, pressure ulcer, urinary tract infections, and pneumonia.

Patient education is essential for secondary prevention of the disease. Smoking cessation and adequate control of underlying comorbid conditions such as diabetes and hypertension should be advised with special emphasis on medication compliance and lifestyle modifications.

Patients with cerebellar infarction often present with vague symptoms. Clinical presentations can often be atypical or overlap, in particular with hemorrhagic infarcts. A high index of suspicion and adequate diagnostic skill is required to make a timely diagnosis and provide adequate treatment. When the disease is suspected, a specialized team of interprofessional clinicians and providers should be called to evaluate the case promptly and determine if emergent treatment is indicated. 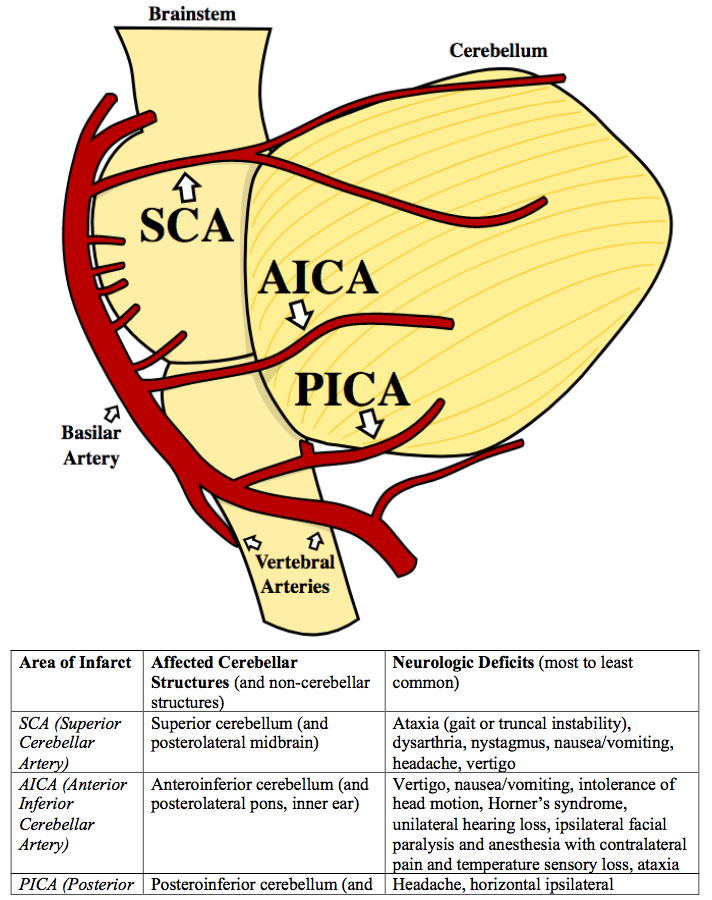 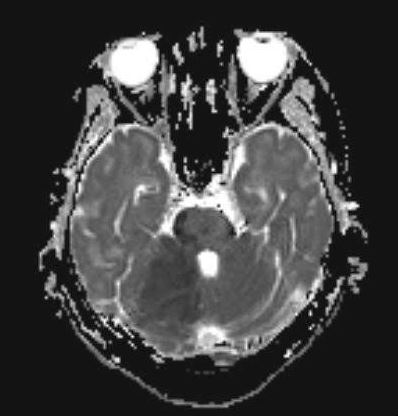 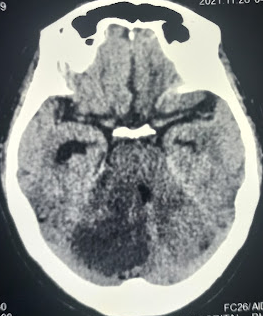 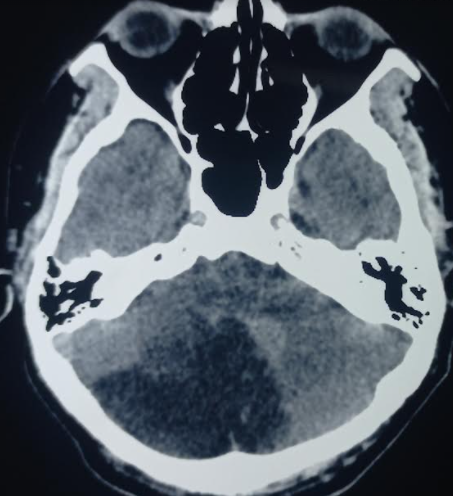