The abdominal aorta predominantly provides blood supply to the upper abdominal cavity and its contents. Its major branches include the celiac trunk, superior mesenteric artery, and inferior mesenteric artery. The first major branch, which comes off anteriorly at the T12 level, is the celiac trunk. It supplies oxygen-rich blood to the spleen, and structures derived from the embryonic foregut. The celiac trunk is a critical artery whose anatomy can vary, and therefore, intricate knowledge of its branches and variations is important in facilitating radiographic interpretations and in limiting surgical complications.

The celiac trunk, also known as the celiac artery, is a short vessel that arises from the aorta and passes below the median arcuate ligament, just as the aorta enters the abdomen at the level of the T12 vertebra. The celiac trunk measures about 1.5cm to 2cm in length.[1][2] It supplies blood to the foregut, namely:

Celiac lymph nodes are located around the celiac trunk and drain lymph from the liver, gallbladder, stomach, spleen, and pancreas into the cisterna chyli, which eventually drains into the thoracic duct.

Celiac ganglia are two nerve bundles located around the celiac trunk at the T12-L1 spinal levels. They represent a mass of nerve cell bodies that are part of the autonomic nervous system and are responsible for innervation of the gastrointestinal tract and abdominal organs. They carry sympathetic input to abdominal parenchyma and are vital for coordinating digestive functions of the gastrointestinal tract, including motility, secretion, and absorption.[4]

The celiac trunk does not supply blood to any muscles of the body. It is only responsible for providing blood to abdominal viscera.

Besides the classic presentation of the celiac trunk trifurcating into its branches, there have been numerous reported cases of variations in the celiac trunk's branching. These cases include, but are not limited to, celiac trunk bifurcation into the hepatic artery and splenic artery, the absence of the trunk itself as it may arise commonly with the superior mesenteric artery (celiacomesenteric trunk).[5][6] The celiac trunk may also give rise to inferior phrenic arteries. These arteries may spring either from the aorta or the celiac trunk.

During surgical procedures in the abdomen, vessel ligation and anastomosis are crucial. Surgeons must have intricate knowledge of the different variations in the vascular anatomy of the celiac trunk, which will help facilitate radiographic interpretations and will also limit complications of surgery.

Most patients present with asymptomatic vascular anomalies of the celiac trunk. However, vital knowledge of the celiac trunk, its branches, and vascular variations is essential for any surgical procedures involving the upper abdomen. These procedures include a liver transplant, diagnostic procedures like angiography for gastrointestinal bleeding, or celiac axis compression syndrome. Recognition of variations in abdominal arteries that supply the liver, pancreas, gallbladder, and spleen can help in reducing the blood loss during surgical procedures involving these areas.[6][7] The vascular anatomy of the celiac trunk also plays a crucial role in arterial anastomoses during surgery.

It is also commonly known as celiac axis syndrome, median arcuate ligament syndrome (MALS), Marable syndrome, and Dunbar syndrome. This syndrome characteristically presents as angina localized to the upper abdomen due to the compression of the celiac artery by diaphragmatic crura.

The median arcuate ligament is a fibrous arch that connects the right and left diaphragmatic crura around the aorta, at the base of the diaphragm. If this ligament is low lying due to its highly variable locations, it can compress or distort the celiac trunk in a downward angle resulting in an unpleasant or excruciating epigastric pain. The pain is often relieved when in the standing position and becomes exacerbated when in the supine position. This syndrome commonly presents in the 20 to the 40-year-old patient population. In specific individuals, this may also result in mesenteric ischemia. The most common complaint alongside epigastric pain is postprandial pain, which results in weight loss.

Computed tomography (CT) angiography would reveal focal stenosis with a characteristic hook-shaped appearance due to the distorted shape of the celiac trunk on its superior surface. Since the celiac trunk can have a similar appearance upon expiration in a healthy patient, it is important to make the diagnosis of celiac artery compression syndrome by correlating the imaging findings with patient history.

Treatment of this syndrome via laparoscopic surgical decompression by dividing the median arcuate ligament and is usually reserved for symptomatic patients.[5]

Although rarely found in clinical cases, celiac artery aneurysm can occur as a form of splanchnic artery aneurysm. A celiac aneurysm is typically asymptomatic until it ruptures. Since the rupture of the celiac trunk aneurysm carries high morbidity and mortality rates, early recognition of this vascular anomaly becomes crucial. It is often found incidentally on diagnostic imaging studies such as arteriography or post rupture in autopsies.

Most commonly, the cause of a celiac trunk dissection is iatrogenic. However, often comorbidities such as atherosclerosis, hypertension, pre-existing vascular diseases such as fibromuscular dysplasia, and even pregnancy can be predisposing factors to arterial dissection. Alternative factors can also include trauma due to a sudden increase in intra-abdominal pressure, or they can be mechanical. Celiac trunk dissections are frequently asymptomatic but may present with abdominal pain if there is the involvement of bowel ischemia secondary to rupture of other abdominal arteries such as splenic, renal, or superior mesenteric arteries.

The optimal means of diagnosing celiac trunk dissection is CT with contrast or CT angiography. However, other imaging studies, such as magnetic resonance (MR) angiography or sonography, can also be considered. On diagnostic imaging, the most common finding for the dissection is an intimal flap and/or a presence of mural thrombus in the lumen of the celiac trunk.

Surgery is usually needed to manage celiac trunk dissection to prevent further acute complications such as rupture, intestinal ischemia, or chronic complications such as arterial stenosis. However, if the clinician diagnoses the dissection as limited, the aim shifts toward preventing thromboembolic events. In such cases, treatment is conservative with the use of anticoagulation and anti-hypertensives to control the blood pressure. An additional option can also include evaluating the collateral supply and managing the endovascular itself.[8]

Gastric or duodenal ulcers are painful sores that occur mainly as a result of Helicobacter pylori infection, long-term non-steroidal anti-inflammatory drug (NSAID) use, or tobacco smoking. Patients will report epigastric abdominal pain and early satiety. With gastric ulcers, the pain usually increases after meals, while the pain usually decreases after meals with duodenal ulcers. Gastric ulcers most commonly occur on the lesser curvature of the stomach, which is supplied by the right and left gastric arteries. Duodenal ulcers most commonly occur on the posterior wall of the duodenum, an area supplied by the gastroduodenal artery. The gold standard for testing is Esophagogastroduodenoscopy (EGD). Management typically includes H2-receptor antagonists and proton pump inhibitors (PPIs). 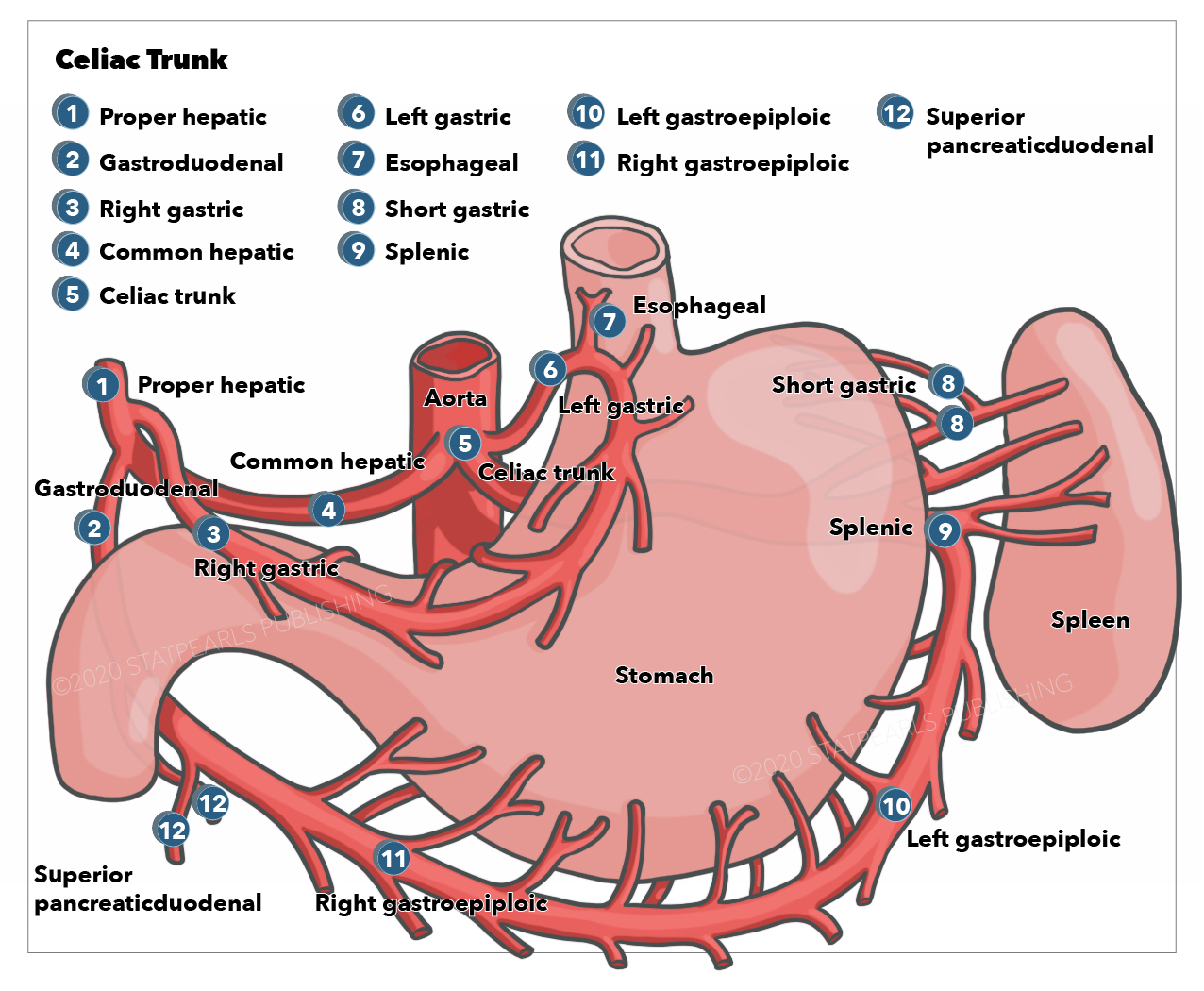 Hemamalini, Variations in the branching pattern of the celiac trunk and its clinical significance. Anatomy     [PubMed PMID: 30310705]