Both the digestive system and accessory structures have a complex nerve infrastructure that often goes unnoticed. Celiac ganglia are nerve bundles located in the upper abdomen as part of the autonomic nervous system that is functionally responsible for innervating the digestive tract and abdominal visceral tissue. The ganglia serve as integrative centers for coordinating intestinal motility as well as secretion and absorption throughout the digestive tract. The ganglia's close tie with the gastrointestinal tract makes them essential in a variety of clinical scenarios, including pancreatic cancer and gastroparesis.

Celiac ganglia are the two largest ganglia in the autonomic nervous system (ANS) and serve as an example of prevertebral ganglia. The celiac ganglia possess the cell bodies of the postganglionic sympathetic neurons and thus provide efferent sympathetic input to gut parenchyma via neurotransmitters such as acetylcholine in preganglionic neurons and norepinephrine in postganglionic neurons.[1][3] Because these nerves carry sympathetic input, they interact with alpha and beta-adrenergic receptors. These neurons contain axons that innervate the lower esophageal sphincter, the stomach, the upper small intestine, liver, and pancreas. In the stomach and intestines, the sympathetic output from celiac ganglion causes sphincter contraction and decreased motility. In the pancreas, there is diminished exocrine secretion as well as decreased insulin secretion. Finally, in the liver, inputs from the celiac ganglia cause increased glycogenolysis and increased gluconeogenesis.[3]

The ganglia are an extrinsic level of regulation because they are not present within the viscera itself.[1] The current belief is that celiac ganglia are their own level of regulation, distinct from both the central nervous system as well as the intrinsic control in digestive viscera. For this reason, the ganglia have earned the name 'little brain.' The ganglia can modify input received by neurons at the presynaptic level as well as the ability to modify neuronal excitability at the postganglionic level. Additionally, the celiac ganglia and prevertebral ganglia, in general, play a significant role in directing reflex loops involving two different organs or different segments of the same organ.[1]

Prevertebral ganglia, in general, contain extensive vascularization. The primary source of vascularization of the celiac ganglia is the celiac trunk and specifically the celiac artery, which eventually branches into small ganglionic capillaries. Most ganglionic capillaries are continuous, but some are fenestrated, which allows the movement of substances through the membrane.[1] The celiac trunk also splits into three major branches, including the splenic, left gastric, and common hepatic arteries.

The pathway of autonomic innervation via the celiac ganglia to the gut parenchyma first involves nerves emerging from the lateral horn of the spinal cord. Then, a neuronal axon exits the spinal cord via the ventral root. Next, the signal exits the spinal nerve via the white ramus at the level of the sympathetic trunk and passes through a sympathetic ganglion (also called paravertebral ganglion); however, there is no synapsing on any cell body in the paravertebral ganglion.[6] The signal then travels via a splanchnic nerve to reach a prevertebral ganglion where it synapses with ganglion cell bodies. Axons from the ganglion cells synapse with the target tissues in the gut.[1] Each celiac ganglion receives preganglionic innervation by the greater splanchnic nerve in the upper portion of the ganglia. However, the lower part gets segmented into the aorticorenal ganglion, which receives innervation from the lesser splanchnic nerve. Efferent fibers leave the celiac ganglia in periarterial plexuses.[2]

Postganglionic nerves from the celiac ganglia innervate the smooth muscles of the digestive tract.

Knowing the innervation of celiac ganglia postganglionic axons, physicians can use neurolytic blocks to provide relief in a variety of intestinal, pancreatic, and liver-related pathologies. Patients who suffer from refractory visceral pain may benefit from chemo denervation or selective surgical block of celiac ganglion that supplies visceral structures.

One such cause of refractory visceral pain is advanced pancreatic cancer or chronic pancreatitis. Abdominal pain due to pancreatic cancers involves cancer cells invading nerves both in and out of the pancreas, triggering nociceptive fibers in the pancreas. Because afferent neurons from the pancreas connect with the celiac ganglia, blocking the ganglia results in the lack of transmission of the signal from the ganglia to the dorsal root ganglia at the T12 to L1 spinal level.[7] Success with celiac ganglion blocks in patients with pancreatic cancer additionally decreases the need for opioids in this patient group.[8]

Another cause of visceral abdominal pain, as well as intractable nausea and vomiting, is gastroparesis due to chronic diabetes. Because the celiac ganglia decrease bowel motility, neurolysis of celiac ganglia can increase GI motility as well as reduce the pain associated with severe cases of gastroparesis.[9]

Celiac axis compression syndrome (also known as median arcuate ligament syndrome) presents with a triad of postprandial abdominal pain, weight loss, and an occasional abdominal bruit.[10] Most of the symptoms produced are due to decreased blood flow to the intestine from the celiac artery. However, neurolysis of celiac ganglia is often part of the treatment to eliminate the neuronal irritation of the celiac ganglia.[10] 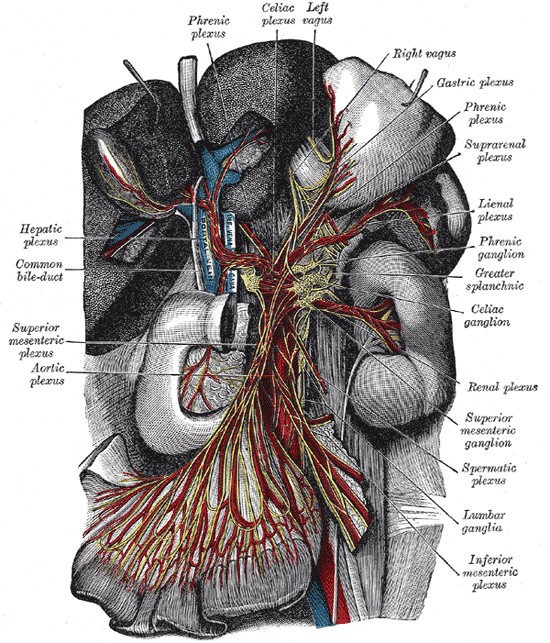 The Great Plexus of the Sympathetic System, The celiac ganglia with the sympathetic plexuses of the abdominal viscera radiating from the ganglia
Contributed by Gray's Anatomy Plates