“Lepidopterism” refers to various skin & systemic reactions secondary to contact with moth and butterfly larvae or caterpillars (order Lepidoptera). It is worth noting that the adult forms of moths and butterflies do not sting. “Erucism,” taken from the Latin derivation “eruca” (caterpillar) refers to the cutaneous reactions only.[1]

Of the nearly 165000 species, only about 150 are clinically significant.  In the United States, there are over 50 species with the ability to inflict a painful sting.  The most dangerous is the puss caterpillar, also known as asp caterpillar (Megalopyge opercularis), which is the larvae of the flannel moth, found in the Southeast of North America.  These are most plentiful in late spring through early fall.[2]

Toxicity manifests from sting reactions, toxic dermatitis (hypersensitivity reactions), and lonomism, which is a potentially fatal hemorrhagic dyscrasia.[3]  Diagnosis is straightforward in most patients due to a recent history of contact with the offending insect and resultant symptoms.

Overall, most of the sting and hypersensitivity reactions are benign and resolve spontaneously, requiring nothing more than symptomatic treatment.  The notable exception is lonomism, which requires emergency evaluation and inpatient consultation/admission.  Prompt medical intervention is crucial in minimizing the morbidity and mortality of this disease, particularly acute kidney injury (AKI).[4]

Toxic dermal reactions are commonly due to physical contact with caterpillar's setae (hair or spines).  These are hollow structures with a single basal poison gland.  These spines fracture and inject venom under pressure.  Some species release these toxic setae into the environment where they can be inhaled and affect both the upper and lower respiratory tract.  Another source of exposure, direct or aerosolized, is from the caterpillar's hemolymph (invertebrate's blood equivalent).

Eye exposure of either hemolymph and/or setae results in acute scleritis or ophthalmia nodosa; this manifests as simple conjunctivitis and progresses into a more severe panophthalmitis when setae penetrate the cornea.[5]  In rare cases, cataracts can develop.[6]

Reactions are either from the direct toxic effects of the setae/hemolymph or immunoglobulin E (IgE) production which results in a hypersensitive state and manifests as a type IV (T-cell-mediated) hypersensitivity reaction.[7]

Most reactions result from direct contact.  Other vectors include airborne transmission spread by wind or carried on pets and other natural objects.

Exposure varies depending on the locale and season. Jobs requiring climbing trees or working closely with plants is a risk factor in adults.  Children, being naturally curious and tending to pick up or touch caterpillars, are at somewhat increased risk of exposure.  Cases among males are more numerous than with females.  Areas, where indigenous species shed setae carried through the air, can result in multiple exposures, especially in seasons when they are plentiful.[8]

Spring or summer can result in a spike of cases with regards to school recess, camping/hiking, logging activity, or landscaping.

Dendrolimiasis, which can be chronic, results from exposure to the Asian Dendrolimus pini caterpillar.[8]  Symptoms include a pruritic maculopapular rash and migratory polyarthritis which progress to chronic osteoarthritis.

In Lonomism, the venom of the Lonomia obliqua (giant silkworm moth) caterpillar activates factor X and prothrombin which can lead to coagulopathy.  Suggested mechanisms of toxin-mediated AKI are postulated to be dilation of Bowman's capsule, increased permeability of the tuft capillaries resulting in deposition of fibrinolytic compounds leading to acute tubular necrosis (ATN).[4]  Systemic lonomism manifests as a consultive coagulopathy with secondary fibrinolysis although the majority of deaths result from acute kidney injury.

Continuing research is currently underway for other caterpillar species and their venom.

Toxicologic studies of caterpillar venom are most prevalent in the toxicology & dermatology literature; however, more studies are necessary for complete understanding.   From current research, the venom has been found to contain peptides, hyaluronidase, phospholipase A, and bioamines such as histamine (or histamine releasing substances).

In cases of direct exposure, the presentation is quite straightforward.  Exposure involving direct contact with the caterpillar and/or airborne setae or hemolymph can result in the development of urticaria, conjunctivitis, bronchospasm and localized pain.

The rash may appear as erythematous, raised, vesicular or ecchymotic skin depending on the species involved.  Systemic manifestations of lonomism, which can occur from two minutes to two hours after envenomation, can present as nausea, vomiting, headache, dizziness, agitation, tachycardia, lymphadenopathy, muscle spasms and altered mental status (AMS) in severe cases.  In general, systemic symptoms resolve within 24 hours.

Stings from Saturniidae species caterpillars (Lonomia) have fibrinolytic enzymes in their venom.  This venom can cause diffuse bruising and bleeding from affected sites, which can include hematuria from urinary system involvement and gingival bleeding with oral involvement. There have also been case reports of intracranial hemorrhage (ICH) and AKI.  These systemic symptoms can persist up to 6 months after exposure.

In general, laboratory or imaging studies are not required, especially for self-limiting localized symptoms.

However, if systemic symptoms are present or there is a known exposure to New World caterpillars (such as Lonomia species) then the following studies should be considered:

Prehospital treatment is as simple as washing the affected areas of skin with soap and water and drying without contacting the skin (such as using a hair dryer or fan).  Remember to remove any constricting clothing or jewelry as soon as possible.

All suspected ocular exposures should undergo immediate irrigation with copious amounts of water.  Placement of a topical anesthetic will significantly ease eye pain and facilitate treatment/examination.  Consider using a Morgan lens if available.  Analysis with a slit lamp using fluorescein will help to determine if any setae remain on the cornea or if resultant corneal abrasions are present.  Consider urgent ophthalmologic consultation for any caterpillar-related eye exposures.

For suspected setae exposures, adhesive tape applied to the skin then removed will remove remaining caterpillar spines.  Duct tape is most useful for this approach; however, any available tape will do.

Cutaneous symptoms are manageable with oral antihistamines and application of topical corticosteroids.  Systemic steroids can be considered in refractory cases or with severe symptoms.

Patients presenting with anaphylaxis or severe allergic reactions should receive therapy according to standardized treatment algorithms.

Prognosis is excellent for complete recovery with the notable exceptions of complicated ocular exposures and persistent systemic symptoms.  With appropriate ophthalmologic or other specialty care in a tertiary referral hospital, full recovery is the expectation.  There are rare reports of deaths due to caterpillar exposure/envenomation but these are usually the result of inadequate medical resources/care or in austere locations.

Systemic lonomism usually results in a self-limited coagulopathy and renal impairment with the possibility of chronic renal insufficiency in some cases.

The best prevention is by assuming all caterpillars are toxic.  Teaching children and outdoor workers avoidance will alleviate most exposures.

It is essential to have a heightened level of alertness during peak caterpillar seasons (spring/summer), particularly in endemic areas.

Protective clothing like long-sleeved shirts, long pants tucked into socks, work gloves along with a wide-brimmed hat minimizes the likelihood of accidental exposure.

For known areas of heavy infestation or presence of toxic setae, persons in areas where exposure might occur should utilize a tight-fitting respirator mask and eye protection.

Know your local/regional toxic caterpillars.  Many websites aimed at the layperson are helpful along with descriptions and high-resolution photographs.

Prevention is the best approach to caterpillars.  The healthcare team, including doctors, nurses, and pharmacists, should work toward teaching children and outdoor workers avoidance which will alleviate most exposures.  Everyone playing or working outdoors in endemic areas should have a heightened level of alertness during peak caterpillar seasons (spring/summer).  Encourage patients to wear protective clothing.  Clothing that includes long-sleeved shirts, long pants tucked into socks, work gloves along with a wide-brimmed hat minimizes the likelihood of accidental exposure.  For known areas of heavy infestation or presence of toxic setae, a tight-fitting respirator mask and eye protection should make for a safe work zone. 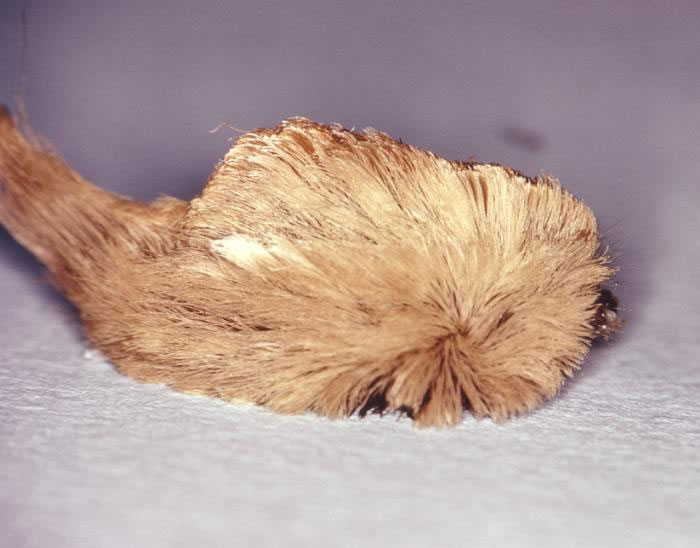