Catecholamines are compounds that function as neurotransmitters and hormones in various physiological processes. The class of endogenous catecholamines includes dopamine, norepinephrine, and epinephrine. These molecules have key roles in mediating the sympathetic nervous response and several neurologic pathways. Additionally, excess or deficient amounts of free catecholamines are associated with several psychiatric and medical conditions. Therefore, the mechanism of catecholamine degradation, and conditions that result in such dysfunction of that system, are of interest in the study of medicine. This article provides an overview of catecholamine degradation mechanisms as well as their clinical correlations.[1]

Please see the attached figure for a pictorial overview of the following steps:

Epinephrine and norepinephrine primarily get synthesized in sympathetic neurons or the adrenal medulla.

Within sympathetic neurons, the production of epinephrine and norepinephrine is in storage vesicles released on neuronal activation. While in storage, catecholamines can passively leak into the neuronal cytoplasm and undergo deamination by intracellular monoamine oxidase. Therefore, the initial step of catecholamine degradation mostly takes place inside the synthesizing cell. A smaller amount of deamination by MAO takes place in the extracellular space.[5]

Dopamine gets produced by several cell types, most commonly dopaminergic neurons in discrete areas of the brain and mesenteric organ cells. Dopamine metabolism and the formation of HVA occur in the extracellular space, most often before reaching the liver.[7]

Norepinephrine, epinephrine, and all of their intermediate metabolites from degradation eventually travel to the liver, where they are extracted and converted to end product VMA, which ultimately gets eliminated by the kidneys. HVA, which typically forms outside the liver, also undergoes renal elimination by the kidneys and is generally excreted twice as fast as VMA.[8]

Epinephrine and norepinephrine have similar functions as part of the sympathetic nervous system. They differ slightly in that norepinephrine exclusively acts on arteries, whereas epinephrine can bind to receptors on arteries, the heart, lungs, and skeletal muscles. Together, these hormones mediate the sympathetic nervous response leading to tachycardia, increased cardiac contractility, hyperglycemia, and relaxation of smooth muscle in the lungs.[9] Norepinephrine is also primarily responsible for arterial vasoconstriction, leading to increased blood pressure.[2]

Catecholamines are involved in a multitude of physiologic processes and pathology. The following are a few of many examples where knowledge of the degradation pathways has clinical significance.

Parkinson disease is associated with insufficient dopamine in the nigrostriatal pathway. When pharmacological therapy is necessary, one option is a class of drugs called MAO-B inhibitors. These drugs inhibit the initial step of dopamine degradation and increase dopamine levels in the extracellular space. An additional class of drugs, sometimes used with exogenous dopamine therapy, is COMT inhibitors. Similarly, these drugs decrease the rate of dopamine degradation.[1]

Schizophrenia, as opposed to Parkinson disease, is associated with excess dopamine. The primary treatment is with D2 receptor blockers. A medication formerly used in treatment was reserpine. This agent blocked the storage of produced catecholamines into vesicles, thereby increasing the rate of intracellular degradation. This drug is no longer used for this purpose because of a significant side-effect profile, especially with older individuals.[1]

Pheochromocytomas are adrenal medullary tumors associated with the production of large amounts of catecholamines. They can manifest as episodes of tachycardia, hypertension, and headache. The diagnosis of pheochromocytomas and other catecholamine-producing tumors requires detecting metabolites HVA and VMA in the plasma and urine.[10] 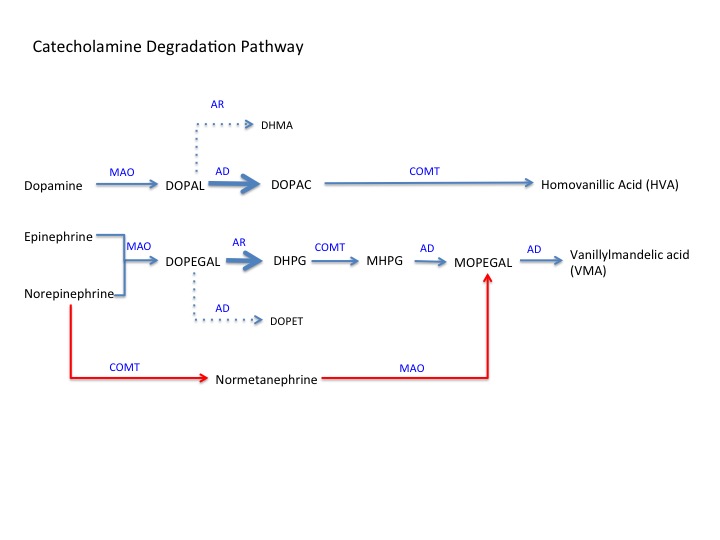 Roth JA, Membrane-bound catechol-O-methyltransferase: a reevaluation of its role in the O-methylation of the catecholamine neurotransmitters. Reviews of physiology, biochemistry and pharmacology. 1992;     [PubMed PMID: 1519017]

Brown MJ, Simultaneous assay of noradrenaline and its deaminated metabolite, dihydroxyphenylglycol, in plasma: a simplified approach to the exclusion of phaeochromocytoma in patients with borderline elevation of plasma noradrenaline concentration. European journal of clinical investigation. 1984 Feb;     [PubMed PMID: 6421600]