The primary physiological function of the coronary veins is to carry deoxygenated blood from the myocardium and empty them into the chambers of the heart. Coronary veins can be organized into two groups: the greater and smaller cardiac venous system.

The greater cardiac venous system returns three-quarters of the deoxygenated blood from the myocardium to the cardiac chambers. The main venous vasculature of this system includes the coronary sinus and its tributaries, marginal veins, anterior cardiac veins, ventricular veins, and atrial veins.[1][2]

Starting from the apex of the heart and running parallel with the anterior interventricular artery, the great cardiac vein travels up along the anterior interventricular sulcus towards the base of the left atrium’s auricle[2]. Once the vein reaches the left margin of the heart, it circumvents to the posterior side and eventually converges with the oblique vein of the left atrium into the coronary sinus. The great cardiac vein empties the blood from both ventricles and the left atrium into the right atrium.[3][4]

The right marginal vein is located on the very inferior margin of the anterior surface of the heart and serves to empty the anterior and diaphragmatic walls of the right ventricle.[3] This small vein is also known for merging with the small cardiac vein in the coronary sulcus.[5]

Also known as the obtuse marginal vein, the left marginal vein drains the myocardium of the left ventricle.[2] This vein travels along the left oblique marginal surface of the heart.

The left and right ventricular veins vary from person to person, but generally, they function to drain the external walls of the ventricles[6].

Inferior Vein of the Left Ventricle

Oblique Vein of the Left Atrium

The oblique vein of the left atrium is a relatively small-sized vein that rounds obliquely and inferiorly towards the posterior left atrium. The vein is also observed to unite with the great cardiac vein to merge with the distal coronary sinus.[4]

The smaller cardiac venous system returns one-quarter of the deoxygenated blood from the inner layers of the myocardium to the cardiac chambers. This system is mainly composed of Thebesian veins draining deoxygenated blood from all sections of the myocardium chambers. Thebesian veins also drain the right side of the heart more than the left side.[8]

Coronary veins receive oxygenated blood and nourishment from coronary arteries and their tributaries. Additionally, large veins especially receive nutrient-rich blood supply from the vasa vasorum, a network of microvessels. Vasa vasorum are also known as the vessels of the vessels.[10]

There are numerous anatomical variations of the cardiac venous system from varied numbers of tributaries to diverse diameters and locations of the cardiac veins. Clinically, understanding unique structural variations can prove salient for a patient’s diagnosis and cardiac intervention. The most notable venous variations involve the great cardiac vein and coronary sinus.[2] The great cardiac vein usually travels along the anterior interventricular sulcus, but some patients’ great cardiac veins course intramurally, which can inhibit venous flow[5] Furthermore, other clinical findings have discovered patients with duplicate coronary sinuses, which may also affect the draining of the venous system.[14]

As the largest coronary vein, the coronary sinus is often utilized as an anatomical landmark for orientation during cardiothoracic surgery. Although most cardiac intervention procedures occur for adult patients, infant and pediatric patients suffering from congenital heart defects also undergo cardiac operations. One congenital atrial septal defect, known as the unroofed coronary sinus, involves an anomalous and unclosed connection between the coronary sinus and left atrium.[15] If left untreated, unroofed coronary sinus can lead to heart disease. Closure between the coronary sinus and left atrium via a stent requires careful surgical management and coordinated teamwork among physicians and medical staff to deliver the best medical care for patients and their families.

For clinical treatment and procedures, the most salient anatomical feature of the cardiac veins is the coronary sinus and its venous tributaries. When patients undergo open-heart surgeries or have obstructions in their coronary arteries, the myocardium must continue to receive nourishment. To prevent ischemia of the operated heart, implementing reperfusion of the coronary sinus and its venous tributaries allows an effective reverse flow of nourishment.[16] Distribution of drugs and cardioplegic solutions via the coronary sinus also holds clinical significance. In several research reports, cardiothoracic surgeons have observed that delivery through cardiac veins can prolong contact time and enhance the efficacy of the treatment even more than the delivery through cardiac arteries can.[17][18]

Due to its optimal location and high visibility, the coronary sinus is also a popular vein for retrograde cardioplegia, temporary cessation of the heart’s activity, as well as targeted for left ventricular lead placement.[19] For cardiac catheterization and pacemaker placement, the left ventricular lead advances through the coronary sinus into the posterior or lateral coronary vein to enter the left ventricular wall. This procedure allows physicians to evaluate cardiac conduction and the patient’s overall coronary health.[20] From therapeutic drug delivery to permanent pacemaker insertion, these various cardiac techniques highlight the importance of the coronary venous system and the knowledge of its unique anatomy. 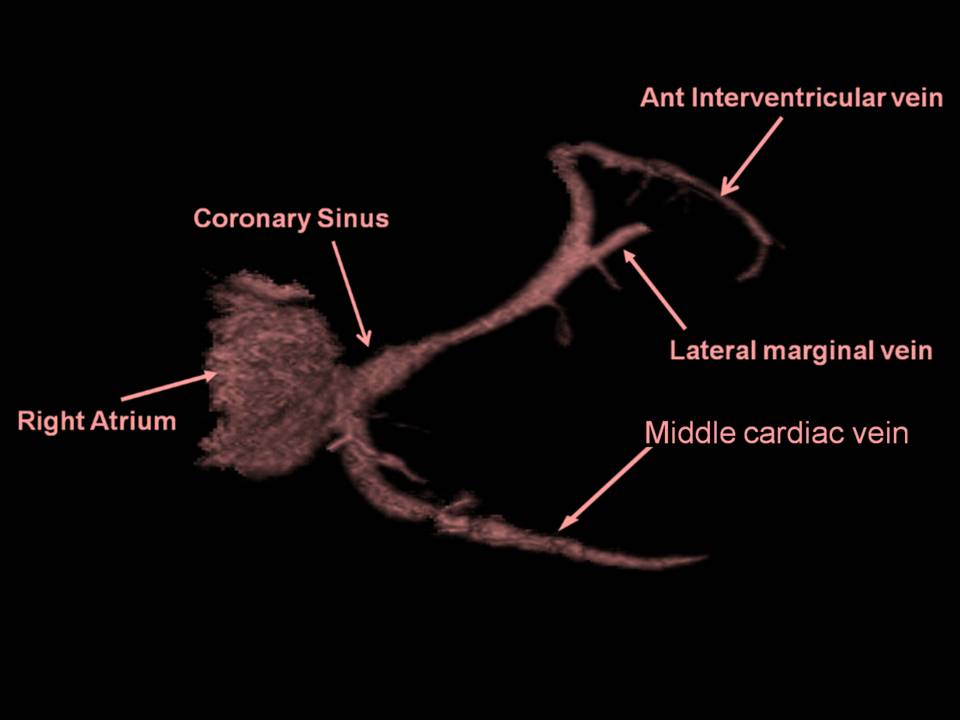 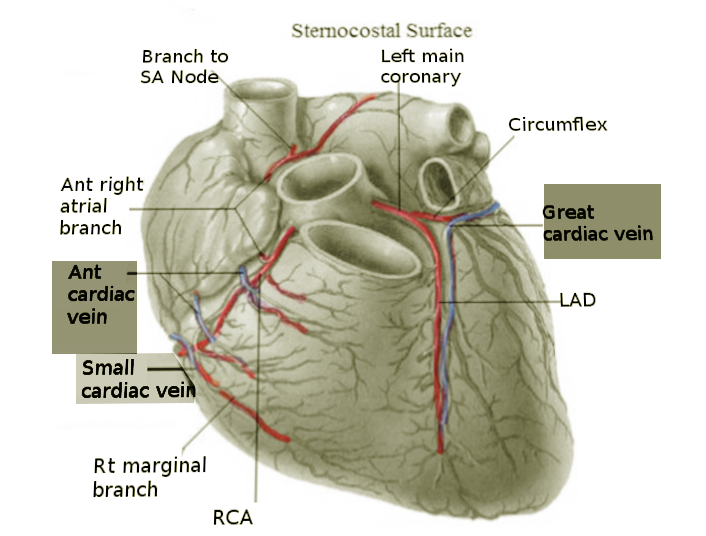 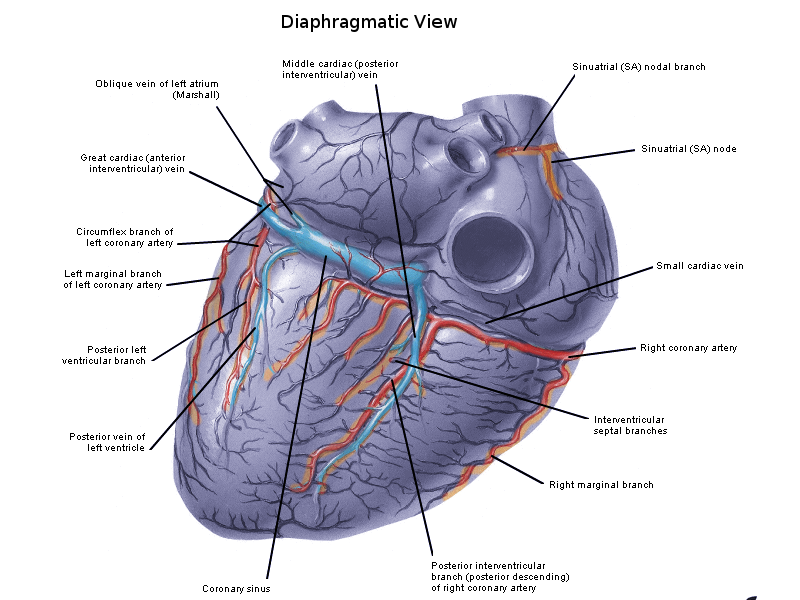 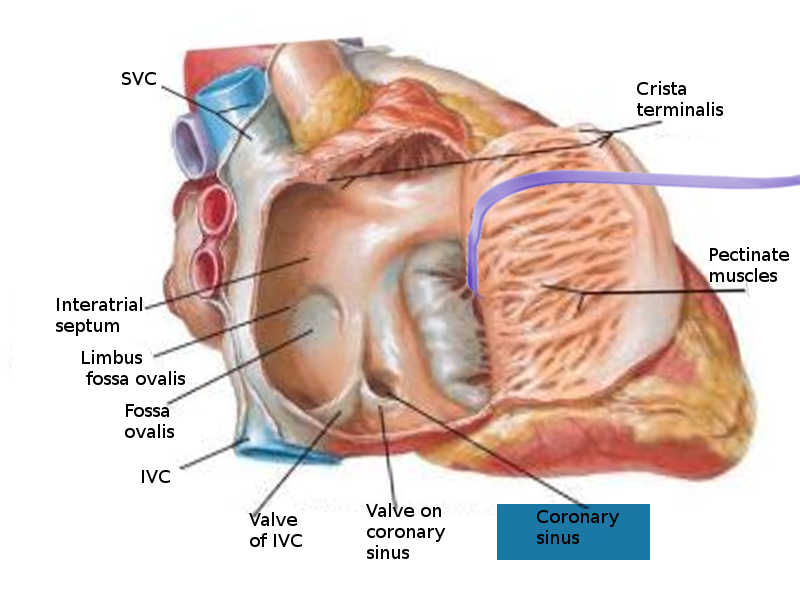