Carbon dioxide is an important side product of both glycolysis and the citric acid cycle (Krebs cycle). This oxidized carbon represents an end product of metabolism that, ultimately, needs to be removed using transport to the lungs and subsequent expiration out into the surrounding environment. Together with renal regulation, this complex process of carbon dioxide production, transport, and elimination is the principal means by which the body regulates the blood’s pH. Disorders in this delicate process can result in acid-base derangements and may be acute or chronic.

Carbon dioxide production occurs in cells, mainly during glycolysis and the citric acid cycle in the cytoplasm and mitochondria, respectively. During these successive biochemical reactions, the energy stored in the reduced carbon bonds of fats, sugars, and proteins is gradually liberated in a series of stepwise reactions until the carbon atom is fully oxidized and bound to two oxygen atoms. This final product is carbon dioxide. Like other molecules, carbon dioxide always moves down its concentration gradient, from sites of production in the mitochondria and cytosol through the phospholipid membrane and into the extracellular space. However, carbon dioxide diffuses readily, much quicker than oxygen. As the cells produce carbon dioxide, it dissolves into the water of the cytoplasm and continues to build up until it reaches a partial pressure greater than 40 to 45 mmHg. This buildup sets up a concentration gradient down which carbon dioxide can diffuse. From that extracellular space, carbon dioxide molecules freely diffuse through the capillary walls, rapidly equilibrating and increasing the partial pressure of carbon dioxide in the blood from about 40 mmHg on the arterial side of a capillary to 45 to 48 mmHg on the venous side.[1]

Once the venous blood returns to the lungs, the carbon dioxide diffuses out of the bloodstream, through the capillaries, and into the alveoli from where it is expelled, during which time oxygen simultaneously binds with hemoglobin to be carried back to the tissues.

There are three means by which carbon dioxide is transported in the bloodstream from peripheral tissues and back to the lungs: (1) a dissolved gas, (2) as bicarbonate, and (3) as carbaminohemoglobin bound to hemoglobin (and other proteins). As carbon dioxide diffuses into the bloodstream from peripheral tissues, approximately 10% of it remains dissolved either in plasma or the blood's extracellular fluid matrix, to a partial pressure of about 45 mmHg.[2] Most of the carbon dioxide diffusing through the capillaries and ultimately into the red blood cells combines with water via a chemical reaction catalyzed by the enzyme carbonic anhydrase catalyzes, forming carbonic acid. Carbonic acid almost immediately dissociates into a bicarbonate anion (HCO3-) and a proton. Thus, bicarbonate is the primary means by which carbon dioxide is transport occurs throughout the bloodstream according to the equation CO2 + H2O --> H2CO3 --> H+ + HCO3-.

As carbon dioxide continues to be produced by tissues, this reaction is continually driven forward in the periphery, according to Le Chatelier's principle. The proton formed by this reaction is buffered by hemoglobin, while the bicarbonate anion diffuses out of the red blood cell and into the serum in exchange for a chloride anion through a special HCO3-/Cl- transporter. Thus, venous blood has both a higher concentration of bicarbonate and a lower concentration of chloride thanks to this so-called chloride shift. In the lungs, this process reverses as both the HCO3-/Cl- exchanger and carbonic anhydrase enzyme reverse directions; this results in an influx of bicarbonate into red blood cells, an efflux of chloride ions, and the generation of first carbonic acid and then carbon dioxide. The carbon dioxide diffuses out of the red blood cells, through the capillary walls, and into the alveolar spaces f exhaled.[1] Finally, the remaining 10% of the carbon dioxide that diffuses into the bloodstream and, subsequently, into the red blood cells, binds to the amino terminus of proteins, predominantly hemoglobin, to form carbaminohemoglobin.[2] Of note, this site is different from the one to which oxygen binds. Multiple physiologic phenomena ensure that this continuous cycle runs with maximal efficiency.

Oxygen delivery and carbon dioxide removal intrinsically link with one another through processes described by the Bohr and Haldane effects. While not detailed here, the Bohr effect states that the increase of carbon dioxide in the blood in peripheral tissues causes a right shift in the oxygen-hemoglobin dissociation curve and, consequently, increased oxygenation of the tissues. Once the carbon dioxide-enriched blood reaches the lungs, however, the reverse of this reaction will also occur. As the influx of oxygen increases hemoglobin saturation, the carbon dioxide is more likely to become detached and diffused into the alveoli for exhalation; this is called the Haldane effect.[3] 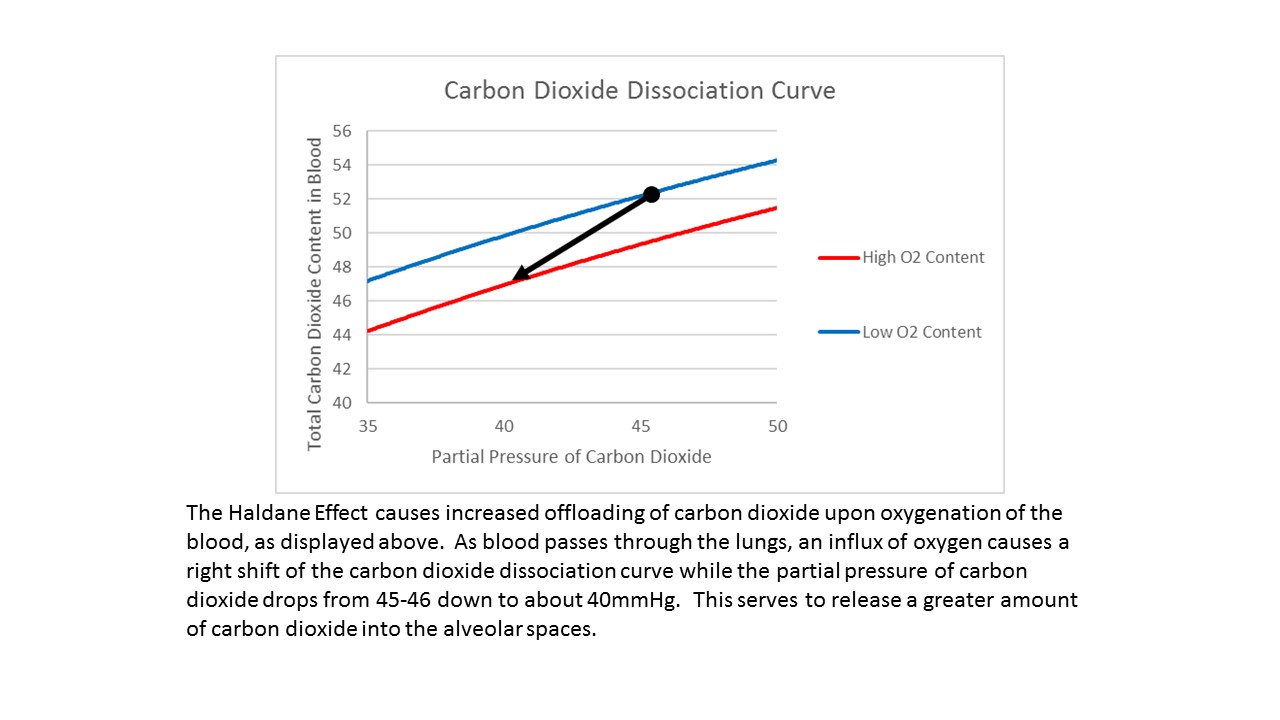