Famous Victorian scientist, Charles-Édouard Brown-Séquard, explained a rare spinal cord injury known as Brown-Séquard's syndrome (BSS) in 1849.[1] He presented the case to the British Medical Association's annual meeting in 1862, which involved a sea captain who had been stabbed in the neck. Brown Se'quard syndrome is an incomplete pattern of injury showing a hemisection of the spinal cord which results in weakness and paralysis on one side of the damage and loss of pain and temperature sensations on the opposite side. This depends on the site of injury which can also involve the cervical or sympathetic thoracic trunk resulting in Horner's syndrome. Overall,  the symptoms depend on which part of the spinal cord is affected. It is also known as the hemisection of the spinal cord. As an incomplete spinal cord syndrome, the clinical presentation of BSS may range from mild to severe neurologic deficit.

The most common causes of Brown- Séquard Syndrome can be divided into traumatic and non-traumatic injuries. Traumatic injuries are far more common. Gunshot wounds, stabbings, motor vehicle accidents, blunt trauma or a fractured vertebra from a fall could be among the causes. To a lesser extent, Brown-Séquard Syndrome can result from a vast variety of non-traumatic causes including vertebral disc herniation, cysts, cervical spondylosis, tumors, multiple sclerosis, and cystic disease, radiation, decompression sickness. Other miscellaneous vascular reasons include hemorrhage or ischemia. There could be infectious causes like tuberculosis, transverse myelitis, herpes zoster, empyema, and meningitis.[2][3][4][5][6]

With Brown-Sequard syndrome, a clean-cut hemisection is usually not visible. However, partial hemisection is evident, and it often includes all the nerve tracts lying along the path in the injured area involved. If the lesion is involved in the cervical region, for example, C5 to T1, that hemisection would create deficits in the following manner:

All sensory sensations would be lost ipsilaterally.

A detailed history and physical exam are extremely important to understand the extent of damage done and establishing what to expect in the coming days regarding neurological deficits. Accounts should have the details of any injury.  Careful examination of the wound site is necessary because it may reveal an injury to the dorsal column systems, spinothalamic tracts, dorsal and ventral spinocerebellar tracts, corticospinal tracts and Horner's syndrome (if the lesion is above or at the level of T1). If the wound is involving the lower lumbar region, then the bladder and bowel symptoms can be detected or respiratory symptoms if lesions are near the brain stem. Usually incomplete forms of the syndrome commonly occur, and this can be caused by vascular impairment secondary to compression of the cord, so history is necessary to rule out infectious causes or recent travel to the endemic areas should be ruled out.

A neurological examination should comprise a detailed motor and sensory evaluation, although sometimes it is hard to perform the physical exam in the beginning especially after trauma because patients are in spinal shock. Clinically, there would be an ipsilateral sensory loss of all sensations, pressure, vibration, position and flaccid paralysis at the level of the lesion and spastic paraparesis below the level of the lesion; contralaterally there would be loss of pain and temperature.

Diagnosis of BSS is made by neurological history, any trauma history, and physical examination. Laboratory investigations in case of infectious etiologies like purified protein derivative and sputum for acid-fast bacilli along with chest x-ray. Magnetic Resonance Imaging or X-ray when traumatic injuries are suspected as well as neoplastic causes.

The treatment for individuals with BSS depends on the cause and is focused on preventing complications. The use of steroids is controversial in traumatic spinal cord injuries due to the risk of infections, and they are not effective in the case of BSS, but standard perioperative prophylactic antibiotics are recommended. Decompression surgery is considered for patients who have a traumatic injury or any tumor or abscess causing cord compression.[9][10]

Nonoperative treatment to support individuals, with an emphasis on less dependency for daily activities and improving quality of life with a multidisciplinary approach involving spinal cord injury physicians, nurses, occupational therapists, and social workers. Specific devices can help to improve the quality of life and daily activities for patients with BSS such as wheelchairs, limb supports and hand splits. If the patient has difficulty in breathing or swallowing, various aids can be applied; cervical collars can also be used depending on the level of injury. In the case of thoracolumbar region involvement, the spinal orthosis can be used.

Differential diagnoses should include stroke, tumor or cysts; other causes of spinal cord injury and compression include epidural hematoma, epidural abscess, syringomyelia, anterior cord syndrome, and central cord syndrome. A careful recording of history will help to establish the baseline functionality of the patient before and after the injury is very important.  Because it will distinguish an acute disorder from a chronic clinical picture. For example, asymmetrical myelopathy can be confused with BSS, but the history will reveal a slower progression of symptoms in the presence of a straightforward clinical exam.[11] Fluctuating asymmetric symptoms would suggest spinal cord demyelinating disorders such as multiple sclerosis over BSS.

The prognosis for individuals with BSS varies depending on the cause of injury and the extent to which the spinal cord is damaged. Generally, as BSS is an incomplete spinal cord injury the potential for significant recovery is strong. More than half of BSS patients recover well, and the majority of post-traumatic patients recover motor function. Recovery becomes slower throughout three to six months, and it can take up to two years for ongoing neurological recovery.[12] If the deficit is at the level where it affects bowel and bladder, patients may gain their function in 90% of the cases. Most patients will regain some strength in lower extremities, and most will regain the functional walking ability. When motor function loss is present, recovery is faster on the contralateral side and slower on the ipsilateral side.

Untreated BSS may bring complications like hypotension or spinal shock, depression, pulmonary embolism and infections most commonly in the lungs and urinary tract. Respiratory support is critical for patients with high thoracic and cervical lesions.

Early treatment leads to prompt symptom resolution in most patients, with physical therapy and rehabilitation being the most essential. BSS has the best prognosis for ambulation of all spinal cord injuries with up to 90% of individuals walking without assisted devices after rehabilitation. Historically, rehab was initiated at 1-2 weeks after the patient is stable, but recently there is a move towards earlier mobilization.

The overall prognosis is not dependent solely on one provider, but rather an interprofessional team of experts. Timely diagnosis and awareness among other physicians, family practitioners, in particular, is important. The latter group is often the initial healthcare providers to diagnose BSS in a patient, especially one with non-traumatic etiology. A prompt surgical referral can allow for early decompression and stabilization if needed, which has been shown to improve outcomes in all incomplete spinal cord injuries. Patient education and setting up expectations on prognosis will help in the postoperative arena, and the prolonged rehabilitative course as recovery can progress for years after the initial injury. BSS, especially isolated and not in conjunction with other incomplete spinal cord injury patterns is rare. There are a few level three studies, but the majority of studies include case reports with level-five evidence. Therefore, further higher-quality studies need to conducted to elucidate ideal prognostic and treatment algorithms. 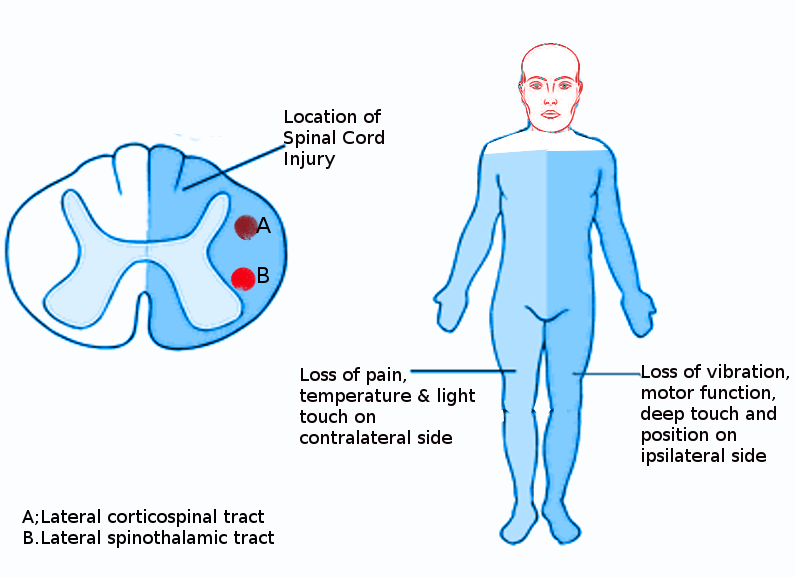