The brows play a fundamental role in the aging face. During the aging process, the brow becomes ptotic, which may cause lateral upper eyelid hooding with or without visual field deficits. Moreover, patients with these characteristic signs of aging are often perceived by others as being fatigued, despite being well-rested and in good health.[1] Currently, there exist several well-described surgical approaches to address brow aesthetics, ranging from the traditional open approaches to newer endoscopic techniques. While each technique has associated benefits and limitations, no clear evidence exists to indicate which method of brow lift surgery is superior.[2] Nevertheless, more than half of brow rejuvenation procedures performed today are performed endoscopically, which likely reflects the current trend toward minimally invasive cosmetic surgery.[3] Therefore, the modern-day aesthetic surgeon should possess thorough knowledge regarding endoscopic brow lift, a technique used to produce reliable and lasting brow restoration.

Characteristic Signs of Aging in the Upper Face [4]

Indications for Endoscopic versus Open Techniques

Photographic views should be obtained using a 5-view head series with the patient in a seated and upright position with no facial animation. Close-up views of the eyes (closed/open/upward gaze/lateral gaze) require documentation as well.[1]

Landmarks identified include the supraorbital notch, the proposed highest point of the brow, course of the frontal branch of the facial nerve, and sentinel vein.

Incisions are marked. Placement of three frontal hairline incisions (1 median and two paramedian) is 1 cm posterior to the hairline, typically less than 2 cm in length. The paramedian incisions are marked vertically above and slightly medial to the planned highest point of the brow arch. Two temporal incisions are marked parallel and posterior to the temporal hairline on a vector line drawn from ala through lateral canthus extended into the hairline. There is no recommendation to shave the incision sites, though hair ties may be used to corral the hair on both sides of the proposed incision sites for improved visualization.

The patient is positioned supine with the endoscope monitor at the foot of the bed within view of the surgeon.

Local anesthesia infiltrates along the supraorbital and lateral orbital rims. Tumescent solution is injected subperiosteally from the supraorbital rim to the vertex between the superior temporal lines, and then into the superficial temporal spaces bilaterally. The endoscopic brow lift may be performed entirely under local anesthesia; however, general anesthesia or intravenous (IV) techniques are advisable to ensure patient comfort. When using intravenous sedation, the recommendation is for nerve blocks of the auriculotemporal and zygomaticotemporal nerves.

A single dose of intravenous antibiotics is the recommended prophylaxis before the start of the procedure.

The surgeon makes midline and paramedian incisions through all layers of the scalp to the cranium. The temporal incisions only carry to the superficial layer of the deep temporal fascia.

Using a curved periosteal elevator, the midline and paramedian ports are used to perform blind dissection (without the endoscope) to develop a full-thickness subperiosteal pocket between the temporal lines. Blind dissection carries anteriorly to a point 1 to 2 cm cephalic to the supraorbital rims and anterolaterally along the lateral orbit rims to the lateral canthus.

With the completion of periosteum exposure and scoring, resection or ablation of the frontalis, corrugators and procerus muscles may follow if desired, a maneuver typically reserved for patients with deep forehead and glabellar rhytids.[9] Note: Aggressive release of the corrugators has the risk of widening the inter-brow distance.

A curved elevator is then used via the temporal port to blindly dissect the tissue plane between the temporoparietal fascia (superficial temporal fascia) and the temporalis fascia (deep temporal fascia) that overlies the temporalis muscle. The entirety of the superficial temporal space gets released anteriorly and posteriorly and inferiorly approximately 1 cm above the zygomatic arch to avoid injuring the facial nerve as it crosses the zygoma. The sentinel vein, usually identified 1 cm lateral to the frontozygomatic suture line, should not be cauterized if possible as to decrease the risk of facial nerve injury.

Fixation is usually accomplished first at the temporal ports and then at the paramedian ports. Large permanent or semi-permanent suture (ex. 0-0 nylon or polydioxanone) is utilized to affix the temporoparietal fascia to the deep temporalis fascia in a vector that follows the line formed from the ala to the lateral canthus. Fixation at the paramedian incision is then performed, which is possible via a multitude of techniques. The surgeon can use a tissue fixation device. Holes are drilled in the skull through the paramedian incisions to place the devices bilaterally. The inferior scalp flap is then lifted off the bone and suspended superiorly onto the device prongs with the help of an assistant. This maneuver holds the periosteum in place and sets the height and arch of the brows. Note: In general, approximately 5 mm of vertical relapse should be anticipated depending on the thickness and redundancy of the preoperative forehead.

Scalp incision closure is with either skin staples or sutures, and petrolatum or antibiotic ointment is applied. Drains are usually not necessary, and one may use a light forehead wrap placed as a pressure dressing.

Nonetheless, patient satisfaction with endoscopic brow lift is high (greater than 98%), and only rarely are significant complications reported.[3]

Lastly, while the endoscopic brow lift may portend a lower complication profile compared to the traditional open approaches, this finding remains inconclusive due to the lack of well-designed studies and standardized outcome measures in brow rejuvenation.[11]

An endoscopic brow lift aims to restore a more youthful and rested appearance. When performing an endoscopic brow lift, it requires meticulous surgical technique, strict adherence to anatomic dissection planes, and direct visualization used at crucial points in the procedure enabling a safer, more-complete dissection and ultimately a better outcome.

Is imperative to identify the risk factors and perform a thorough assessment of the patient before an endoscopic brow lift. A team approach is an ideal way to limit the complications of this procedure. Prior to surgery, the patient should have the following done:

an interprofessional team of an operative clinician, anesthesiologist, and surgical assistants and operative nurses should perform the endoscopic brow lift for the best outcomes. A nurse dedicated to the monitoring of the patient during anesthesia is highly recommended. Pharmacist involvement comes in the form of prophylactic antibiotic verification (e.g., dose, appropriateness of agent selected), post-operatively, with pain control and corticosteroid dosing and duration recommendations, along with a complete medication reconciliation to ensure no drug-drug interactions, reported to the healthcare team is present. Close follow-up during the initial post-operative period, either by a wound care nurse and/or clinician experienced in the postoperative care of endoscopic brow lifts, should monitor the patient for possible complications including hematoma formation. The patient will also require education on avoiding strenuous activity, heavy lifting, or bending over during the first several days post-operatively to prevent such complications. Only through this type of interprofessional healthcare team approach can outcomes for this procedure achieve their optimal result. [Level 5]

Adequate pain medication is necessary, as patients often report severe tension headache-like discomfort for the first day or two postoperatively. Ice packs should be placed intermittently around the eyes for the initial 24 hours. The head dressing gets removed on postoperative day 1, at which time showering may resume. Sleeping with the head elevated for 1 week, avoiding vigorous activity for 2 weeks after surgery, and a low dose corticosteroid taper may help lessen bruising and swelling. Patients are asked to return at 1 week for wound assessment and staple/suture removal. Hair coloring is safe to perform at 1 month. At 6 to 8 weeks, the result is considered stable. It is not uncommon that the tine-fixation devices remain palpable out to 5 months. Photographic documentation should occur at the 3-month and 12-month visits.

Close follow-up during the initial post-operative period, either by a wound care nurse and/or clinician experienced in the postoperative care of endoscopic brow lifts, should monitor the patient for possible complications including hematoma formation. 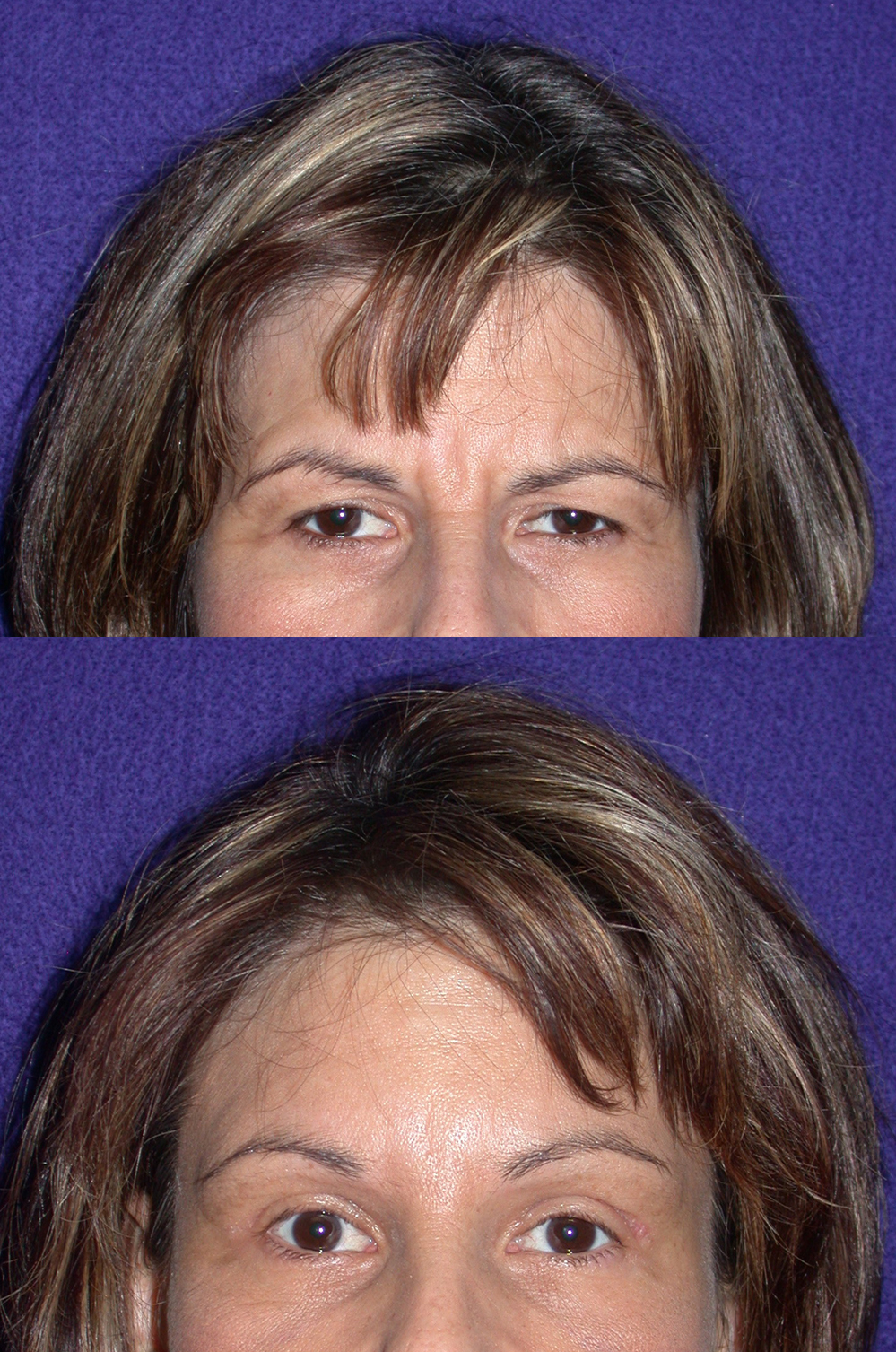 Before (above) and after photos of a 43-year-old female. Patient had endoscopic brow lifts, together with upper blepharoplasty and ptosis repair, transfer of fat to the frown lines and weakening of the corrugator and procures muscles.
Contributed by Prof. Bhupendra C.K. Patel MD, FRCS