Brachioradial pruritus (BRP) is a localized neuropathic dysesthesia of the dorsolateral upper extremities. It is commonly seen in middle-aged white females with a seasonal predilection for warmer summer months. Cervical radiculopathy or neuropathy in the upper extremities in conjunction with ultraviolet radiation (UVR) are thought to be causative. This activity describes the cause and pathophysiology of brachioradial pruritus and highlights the role of the interprofessional team in its management.

Brachioradial pruritus (BRP) is a localized neuropathic dysesthesia of the dorsolateral upper extremities. It is commonly seen in middle-aged white females with a seasonal predilection for warmer summer months. Cervical radiculopathy or neuropathy in the upper extremities in conjunction with ultraviolet radiation (UVR) are thought to be causative.[1][2][3] Despite the wide variety of etiologies for pruritus, identification of brachioradial pruritus by dermatologists through the history and physical exam has been straightforward. Further workup, such as imaging, labs, and referral to specialists is rarely required. Therapeutic options are numerous and well-tolerated. Because of the benign transient nature of brachioradial pruritus, the number of reported cases and current studies are relatively low.

The absence of either radiographically evident cervical nerve irritation or UVR does not preclude the diagnosis of brachioradial pruritus.

Brachioradial pruritus lacks characteristic histopathological features. Microscopic findings include actinic elastosis and decreased density of epidermal and dermal nerve fibers. Actinic elastosis correlates with a history of extensive UVR exposure. A decrease in the density of nerve fibers is seen with phototherapy treatments and would be consistent with UVR-induced brachioradial pruritus exacerbations during the sunny summer months.

Because pruritus has many etiologies, a thorough history is essential to avoid unnecessary testing and delay in treatment. Brachioradial pruritus has a wide area of presentation but is most commonly reported on the dorsolateral arms. Adjacent areas that may be affected are in the C5 to C6 dermatome and include the upper arms, shoulders, and neck. In addition to pruritus, patients may report pain, stinging, or tingling in the affected area. Brachioradial pruritus is bilateral approximately 75% of the time. [7][8][9]Symptoms are usually present for 2 to 3 years before diagnosis. Patients are typically outdoor enthusiasts such as bikers, hikers, and tanners and may have an extensive history of sunburn. Despite the high frequency of cervical spine abnormalities seen on imaging in patients with brachioradial pruritus, retrospective studies report that very few patients had complaints of neck pain, cervical spine narrowing, or neck trauma.

The ice-pack sign is considered pathognomonic for brachioradial pruritus. The test is simple and involves placing an ice-pack to the affected area. The patient should report immediate improvement of pruritus that returns shortly after the removal of the ice-pack.

Evaluations beyond a thorough history and physical and the ice-pack test are typically unnecessary. Imaging, blood tests, and referrals to appropriate specialists may be required in recalcitrant cases. Imaging modalities such as x-ray, CT, and MRI usually are not required. If imaging of the cervical spine is desired, MRI is the preferred modality. Screening blood work for causes of chronic pruritus can be performed. Referral to neurology for further examinations may be appropriate if a neurological cause is suspected. Neurological examinations include cervical spine imaging and electromyography (EMG).

Methods of UVR avoidance include reducing sun exposure, judicious use of sunscreen, and use of long-sleeved UV-protective clothing. This may be difficult for some patients with brachioradial pruritus, as many enjoy outdoor activities during the warm summer season. Topical medications include capsaicin, mild steroids, anesthetics, antihistamines, and amitriptyline/ketamine. Earlier reports stated topical capsaicin was the most commonly prescribed initial therapy. A newer study reported the oral tricyclic antidepressant, amitriptyline, was the most commonly prescribed medication for brachioradial pruritus, although gabapentin may be more efficacious.

Other oral medications include risperidone, fluoxetine, chlorpromazine, and hydroxyzine. For unknown reasons, systemic antihistamine therapies are ineffective in brachioradial pruritus. Response to treatment was greatest in patients who rated their pruritus as severe and those that continued with longer treatments. [10][11][12]It should be noted that the sample size of most studies are small and differences in the most prescribed and efficacious therapy vary. Surgery was reserved for patients with a correctable cervical spinal abnormality seen on imaging. Very few patients fall into this category.

The diagnosis and management of BRP are very difficult and thus it is managed by an interprofessional team that includes a neurologist, hand surgeon, dermatologist, nurse practitioner, primary care provider, internist, psychiatrist, and specialty trained nurses. Communications between these professionals will improve the coordination of care. Specialty trained nurses in dermatology, pain management, and psychiatry may be involved.

The condition is more common in middle-aged white females with a seasonal predilection for warmer summer months. Cervical radiculopathy or neuropathy in the upper extremities in conjunction with ultraviolet radiation (UVR) are thought to be causative.There are hundreds of treatment for the disorder but none works reliably or is better than other treatments. Patients go through exhaustive workup to determine the cause, which is never found in most cases. Many patients develop severe anxiety, depression and become isolated. In these cases, a mental health consultant physician and specialty-trained nurse should be included in the team. The pharmacist and nurse should educate the patient in the management of pain and pruritus. In addition, the patient should be told to avoid exposure to the sun, wear long-sleeved garments and keep the skin moisturized. Finally, referral to a pain specialist may be in order if the pain is constant and can vary from moderate to severe.

The condition is benign but it can seriously affect the quality of life because of the constant itching.[13][3] [Level V] 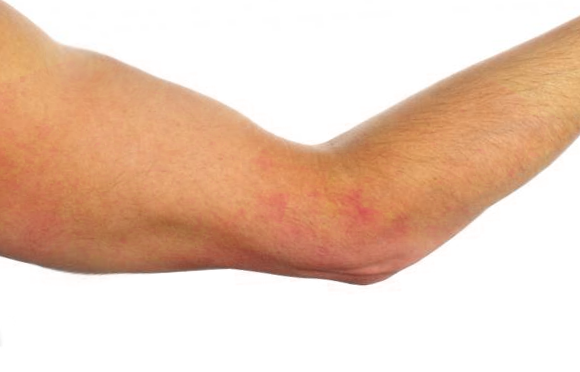