Body mass index (BMI) is the method of utilizing an adult's height and weight to broadly place them into underweight, normal weight, overweight and obese categories. An individual's BMI is important in the determination of potential future health issues and has been widely used as a factor in the determination of various public health policies. BMI can be calculated using metric or imperial (US) units.[1]

To further discuss BMI and the issues, disease states, and clinical significance, it is important to understand the current cut-off points of each category as determined by the World Health Organization (WHO) and the Centers for Disease Control and Prevention (CDC).

Centers for Disease Control and Prevention (CDC) child and teen BMI: Utilized for those ages 2-20

Individuals with abdominal (visceral) obesity are at a greater risk of acquiring multiple pathological conditions and have a higher morbidity and mortality rate.[3] However, BMI has no way to account for this variable. In the calculation of BMI, height is squared to reduce the contribution of leg length in taller people, as most body mass remains within the trunk. Of concern is that with this normalization, the equation distributes equal mass to each height level, which subtracts from the utility of BMI in studies of differing body types.[1]

It is also essential to understand that BMI has limited use in evaluating bodyweight health in people of short stature and does not account for differences in body types between men and women. One study of 13,601 subjects found that BMI-defined obesity (BMI greater than or equal to 30 kg/m^2) was present in 31% of women and 21% of men, while body fat-defined obesity was found in 62% of women and 50% of men. This study showed that BMI-defined obesity is highly specific (99% for women and 95% for men) but shows poor sensitivity (49% for women and 36% for men). Simply put, this study demonstrated that BMI is beneficial when determining a patient to be obese but can give false data when determining a patient not to be obese.[4]

In the elderly population, being overweight is not associated with increased mortality risk. Instead, there is an increased mortality risk for those elderly individuals with a BMI at the low end of the recommended BMI range (BMI < 23.0 kg/m^2). That being said, it is important to immediately address any unexplained weight loss within this population to identify potentially modifiable causes.[5]

As weight fluctuates within the critically ill population (typically decreased weight), it is not useful to utilize the BMI of these patients to guide treatment options or future outcomes.

Literature has shown associations between BMI and cancer growth at a cellular level and association with other disease states.[7] Clinicians know that increased BMI influences numerous disease states, with ongoing research being performed to define the pathophysiology of such conditions. Bellows et al. worked on the association of BMI on progenitor cells in the article, Influence of BMI on Level of Circulating Progenitor Cells. The study evaluated mesenchymal stromal progenitor cells and circulating progenitor cells in healthy participants with a BMI less than 30 and healthy participants with a BMI greater than 30. They found a 5-fold increase in the circulating progenitor cells in the group with the larger BMI. This study was done to elaborate on prior studies that showed an increase in white blood cells and associations with neoplasms in obese populations. Progenitor cells are needed for a favorable tumor environment, and tumors require angiogenesis and vasculogenesis to progress. When white adipose tissue mobilizes progenitor cells, they are recruited by the tumor to support cancer growth. Colorectal cancer has been commonly used to study this phenomenon.[8]

Many studies have also shown a link between increased BMI and insulin resistance. One such study was performed by Preethi et al.of healthy men aged 18-25, titled Body Mass Index a Better Predictor of Insulin Resistance than Waist Circumference in Normoglycemics. The participant's BMIs and waist-hip circumference ratios were calculated, after which they underwent a 2-hour glucose test. As the study title indicates, BMI had a statistically significant higher correlation with insulin resistance.[9] At the cellular level, an increase in BMI will likely increase stored energy and adipocytes. With 10 kilograms of excess weight, there is a 10 to 30% increase in beta cell mass, leading to an increase in insulin secretion.[10] An increase in insulin secretion leads to a down-regulation of insulin receptors, ultimately causing insulin resistance and, eventually, diabetes.

Lambert Adolphe Jacques Quetelet, a Belgian-born sociologist, astronomer, and mathematician, is responsible for developing the Body Mass Index. In the mid-19th century, Quetelet was searching for a way to relate an individual's height to their ideal weight as a tool for studying populations. The quotient was first cited in 1972 in the Journal of Chronic Diseases. The article discussed BMI as a valuable tool in population studies, or "social physics," as Quetelet called it. It was mentioned that this measurement was not useful for studying an individual; however, due to the simplicity of the equation, it remains the most commonly used anthropometric analysis.

Other anthropometric assessments require measurements of an individual's body. These numbers are less reliable than BMI because they can change depending on the measurement's location. BMI relies on the accuracy of the scale that an individual is weighed on and can be comparatively referred to as an objective evaluation. For these reasons, a quotient developed in the mid-1800s is so widely utilized in the 21st century.[11]

It is generally understood that an increased BMI places an individual at significant risk of developing hypertension, hyperlipidemia, and diabetes, all risk factors for coronary heart disease.[12]

In the respiratory system, an increased BMI is most commonly associated with obesity hypoventilation syndrome (OHS), caused by intra-abdominal pressure and increased body weight inhibiting the physiologic movements of the lungs. OHS causes individuals to feel short of breath, leading them to take short, quick breaths, increasing the risk of acquiring atelectasis. Increased BMI is also associated with obstructive sleep apnea (OSA), which may lead to excessive fatigue, pulmonary hypertension, and abnormal heart rhythms.[12]

In the gastrointestinal (GI) system, an increase in BMI has been associated with gallbladder disease and colon cancer. In addition, increased body fat leads to increased abdominal pressure pushing against the cardiac sphincter in the stomach, which allows gastric contents to be regurgitated into the esophagus, leading to gastroesophageal reflux disease (GERD).[13]

An increase in BMI has also been linked to the development of liver disease. Fatty deposition within the liver, known as non-alcoholic steatohepatitis (NASH), is one of the leading causes of liver failure in the United States. Fat accumulation within the liver causes inflammation, injury, and scarring.[13]

An overweight or obese BMI may also affect the integumentary system. The increase in adipose tissue increases inflammation within the dermis, a risk factor for the development of immune-mediated hidradenitis suppurativa. This increased pro-inflammatory state seen in obesity has also been linked with the development of psoriasis. On the other end of the spectrum, a lower than normal BMI may cause dry, thickened dermis, less exfoliation, and fine hair growth, known as lanugo.[15]

BMI also affects the genitourinary system. Multiple studies have found that acutely ill patients with an obese BMI are more likely to develop acute kidney injury (AKI), which is associated with increased short- and long-term mortality.[16] In addition, excess weight demonstrates a linear relationship with the risk of developing chronic kidney disease (CKD) and end-stage renal disease (ESRD). Obesity has also been shown to cause a specific proteinuric obesity-related glomerulopathy (ORG), the incidence of which is increasing within the United States as the obesity epidemic continues to grow. An obese BMI is also associated with increased prevalence and incidence of nephrolithiasis (kidney stones), specifically uric acid stones. Female urinary incontinence is also strongly associated with obesity.[17]

An increased BMI has been directly related to decreased reproductive function. The current literature has demonstrated that women with a BMI > 30 kg/m^2 have a higher incidence of anovulation/subfertility. Obesity has also been shown to strongly influence reproductive cancers, including neoplasms of the breast, prostate, endometrial lining, and ovaries.[18] Significant reproductive issues are common among young women with an obese BMI. In obesity, there is an increased peripheral aromatization of androgen to estrogens. Via negative feedback, this increase in estrogen leads to a decrease in gonadotropin-releasing hormone (GnRH), which leads to irregular or anovulatory cycles. It has also been found that obese women are three to four times more likely to experience menstrual dysfunction than those with a normal BMI.[19] Obesity in men may also lead to reproductive dysfunction. The increase in adipocytes increases pro-inflammatory cytokines and reactive oxygen species, leading to sperm DNA fragmentation. It has also been suggested that the sperm of obese men have altered epigenetic content, and the seminal fluid exhibits altered endocrine content, both of which can impact early fetal development.[20]

When individuals are categorized as obese, additional testing should be performed. For those with a BMI > 30 kg/m^2, a fasting lipid panel, thyroid function tests, liver function tests, fasting glucose, and hemoglobin A1c should always be performed. For individuals with a BMI < 18 kg/m^2, thyroid level, comprehensive metabolic panel, psychiatric screening for an eating disorder, and malabsorption conditions should be assessed. Screening for malignancy should be performed if a patient experiences rapid and unintentional weight loss.

Clinicians need to understand the concept of BMI due to its wide clinical use as a stratification measure in many treatment guidelines.[1] For the primary care provider, knowing a patient's current BMI can assist in further preventative care and maintenance, including elevated cholesterol workup and management, diabetes screening, thyroid screening, diet and exercise counseling, and more. A sudden, unintentional drop in BMI can alert the provider to an eating disorder, possible malignancy, or malabsorption disease. In other practice settings, such as surgical clinics, BMI is often used to predict recovery time following surgery and calculate the risk of a patient acquiring soft tissue infections and other post-surgical complications. While BMI can help aid in a patient's care, each provider should aim to treat the patient and not the number. For example, if a patient seems to have a greater than average muscle content, it may be worth measuring body fat percentage and not treating based on BMI. 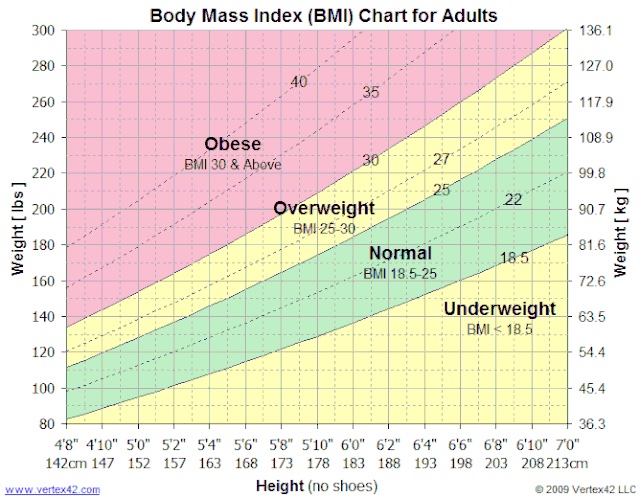 Dağ ZÖ,Dilbaz B, Impact of obesity on infertility in women. Journal of the Turkish German Gynecological Association. 2015     [PubMed PMID: 26097395]