Medicine has made significant progress in understanding circulation in the past few hundred years. For millennia medicine believed in the "four humors" and used bloodletting as a treatment. In the 1600s William Harvey demonstrated how the circulatory system functioned. Shortly after that, scientists became interested in transfusion, initially transfusing animal blood into humans. The first human-to-human transfusion was done in England in 1818 by Dr. James Blundell in post-partum hemorrhage patients. Rapid strides have been made in the understanding of blood typing, blood components, and storage since the early 1900s. This has developed into the field of transfusion medicine. Transfusion medicine involves both laboratory and clinical medicine, and physicians from multiple specialties, such as pathology, hematology, anesthesia, and pediatrics contribute to the field. Transfusion of red blood cells has become a relatively common procedure. In the United States, around 15 million units transfused per annually, while about 85 million units are transfused worldwide.[1][2][3]

While standard hemoglobin values some by gender and race and normal value for hemoglobin and hematocrit vary slightly by the laboratory, anemia is usually defined as a hemoglobin level less than 13 g/dL in males and less than 12 g/dL in females. While currently, a more restrictive threshold is used to determine the indication for transfusion, previously a liberal strategy, typically using a cutoff of hemoglobin less than 10 g/dL was used, regardless of symptoms. Currently, guidelines for transfusion of red blood cells (RBC), generally follow a restrictive threshold. While there is some variation in the number for the threshold, 7 g/dL is an agreed upon value for asymptomatic healthy patients. Multiple studies have shown that this is an acceptable threshold in other patients populations as well, including in those with gastrointestinal (GI) bleeding as well as in critically ill patients. The guidelines recommend a value of 8 g/dL as the threshold in patients with coronary artery disease or those undergoing orthopedic surgeries, but this may be secondary to the lack of literature on using a threshold of 7 g/dL in the evaluation studies of these patient populations. The guidelines and clinical trials (TRICC) also recommend a value of 7 g/dl as the threshold for patients who are critically ill. [4][5][6][7]

Transfusion may also be indicated in patients with active or acute bleeding as well as in patients with symptoms related to anemia (for example, tachycardia, weakness, dyspnea on exertion) and hemoglobin less than 8 g/dL.[8]

Unless the patient is actively bleeding, it is recommended to transfuse 1 unit of packed red cells at a time, which will typically increase the hemoglobin value by 1 g/dL and hematocrit by 3%. Follow up by checking post-transfusion hemoglobin.[9]

There are no absolute contraindications, but the wishes of patients over 18 years of age who may refuse to receive transfusions on religious grounds, should be honored.

Blood products are transfused through intravenous tubing with filters. The filters, which typically have pore diameters of 170 to 260 microns, are used to prevent particulate debris from being administered as well. The trapped material promotes bacterial growth, and the AABB recommends not using a filter for more than 4 hours. Prior to transfusion, the tubing should be primed with an isotonic, calcium-free blood-compatible solution, for example, normal saline. Citrate is used as a preservative in packed red blood cells, and if there is more calcium than the citrate can buffer, clots will form in the intravenous line.

Blood products should be verified by 2 providers prior to administering, and patients should be monitored during transfusion by qualified personnel.

Preparation for blood transfusion involves running pretransfusion testing for compatibility between recipient antibodies and donor red blood cells. This involves obtaining a sample of the recipient’s blood to send for a type and screen. The type and screen test verifies the recipient’s blood type and also determines if the recipient has any “unexpected” (non-ABO) antibodies that might cause a reaction. There are multiple methods for running this screen. If the screen is negative, it is very unlikely there will be a reaction. Obtaining blood for the patient should be done rapidly if required. If the screen is positive, many blood banks will then cross match and hold 2 units of blood for the patient in case they need a transfusion.

For comparison, the lifetime odds of dying from a lightning strike are about 1 in 161,000.

Adverse Event and Approximate Risk Per Unit Transfusion of RBC

Febrile reactions are the most common transfusion adverse event. Transfusing with leukocyte-reduced blood products, which most blood products in the United States are, may help reduce febrile reactions. If this occurs, the transfusion should be halted, and the patient evaluated, as a hemolytic reaction can initially appear similar and consider performing a hemolytic or infectious workup. The treatment is with acetaminophen and, if needed, diphenhydramine for symptomatic control. After treatment and exclusion of other causes, the transfusion can be resumed at a slower rate.

Transfusion-associated circulatory overload is characterized by respiratory distress secondary to cardiogenic pulmonary edema. This reaction is most common in patients who are already in a fluid overloaded state, such as congestive heart failure or acute renal failure. Diagnosis is based on symptom onset within 6 to 12 hours of receiving a transfusion, clinical evidence of fluid overload, pulmonary edema, elevated brain natriuretic peptide, and response to diuretics.

Preventive efforts, as well as treatment, include limiting the number of transfusions to the lowest amount necessary, transfusing over the slowest possible time and administering diuretics before or between transfusions.

Allergic reaction, often manifested as urticaria and pruritis, occurs in less than 1% of transfusions. More severe symptoms, such as bronchospasm, wheezing, and anaphylaxis are rare. Allergic reactions may be seen in patients who are IgA deficient as exposure to IgA in donor products can cause a severe anaphylactoid reaction. This can be avoided by washing the plasma from the cells prior to transfusion. Mild symptoms, such as pruritis and urticaria can be treated with antihistamines. More severe symptoms can be treated with bronchodilators, steroids, and epinephrine.

Transfusion-related lung injury (TRALI) is uncommon, occurring in about 1:12,000 transfusion. Patients will develop symptoms within 2 to 4 hours after receiving a transfusion. Patients will develop acute hypoxemic respiratory distress, similar to acute respiratory distress syndrome (ARDS). Patients will have pulmonary edema without evidence of left heart failure, normal CVP. Diagnosis is made based on a history of recent transfusion, chest x-ray with diffuse patchy infiltrates, and the exclusion of other etiologies. While there is a 10% mortality, the remaining 90% will resolve within 96 hours with supportive care only.

Infections are a potential complication. The risk of infections has been decreased due to the screening of potential donors so that hepatitis C and human immunodeficiency virus risk are less than 1 in a million. Bacterial infection can also occur, but does so rarely, about once in every 250,000 units of red cells transfused.

Fatal hemolysis is extremely rare, occurring only in 1 out of nearly 2 million transfusions. It is the result of ABO incompatibility, and the recipient’s antibodies recognize and induce hemolysis in donor’s transfused cells. Patients will develop an acute onset of fevers and chills, low back pain, flushing, dyspnea as well as becoming tachycardic and going into shock. Treatment is to stop the transfusion, leave the IV in place, intravenous fluids with normal saline, keeping urine output greater than 100 mL/hour, diuretics may also be needed and cardiorespiratory support as appropriate. A hemolytic workup should also be performed which includes sending the donor blood and tubing as well as post-transfusion labs (see below for list) from the recipient to the blood bank.

Electrolyte abnormalities can also occur, although these are rare, and more likely associated with large volume transfusion.

As mentioned in the introduction the science of transfusion medicine, including the transfusion of red blood cells has evolved significantly over the past century. The field of transfusion medicine has evolved as well and includes representation from multiple medical specialties. The ability to transfuse red cells into patients, safely and rapidly, has revolutionized care of trauma patients, surgical patients, and gastrointestinal bleeding among other conditions. Transfusion medicine will continue to evolve, and science is continuing to improve this process as well as working on the alternative methods to carry oxygen to cells, which would potentially reduce the risk of reactions and infection as well as potentially ease storage.

Our understanding of blood transfusion has improved dramatically over the past 3 decades. Unlike before, empirical blood transfusions are no longer the norm. While blood products do have a benefit, they can also cause harm. Healthcare workers who look after patients needing a blood transfusion should consult with a hematologist if they remain unsure about the indications. The key is to reduce the harm from unnecessary blood transfusions. 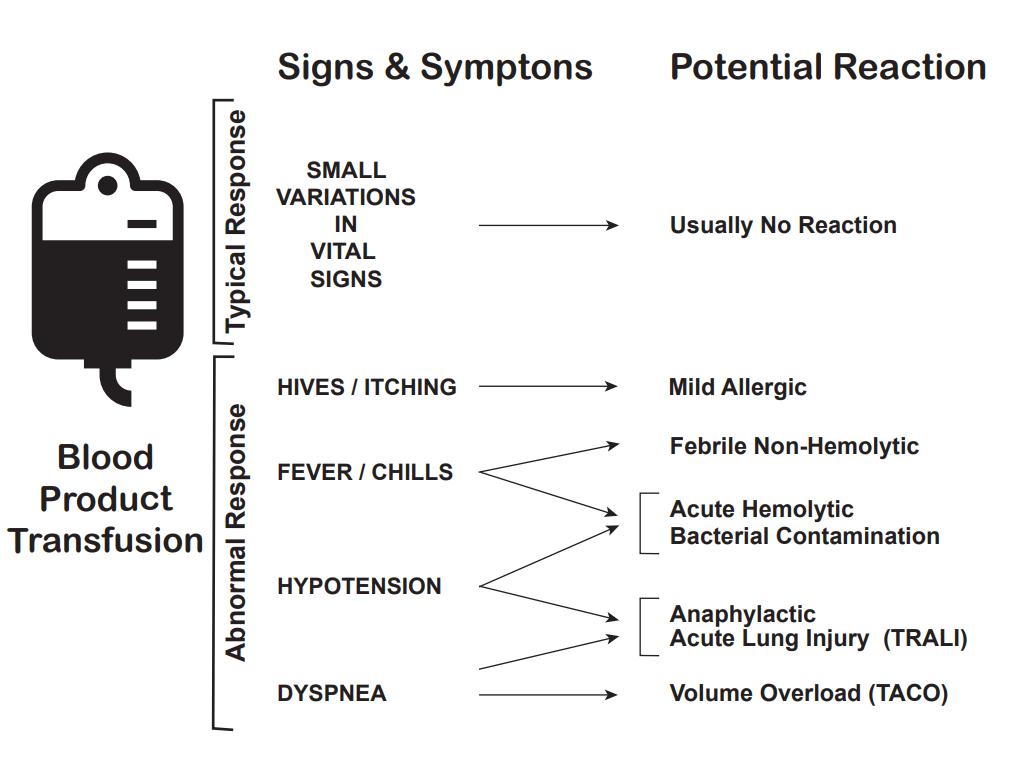