There are as many as 90 species of "bugs" (bed bugs are true bugs with specialized elongated mouthparts) within the family Cimicidae; however, few bite humans. The two main species that most commonly bite humans are Cimex lectularius and the tropical bed bug, Cimex hemipterus. Cimex hemipterus is usually found in the tropics within 30 degrees of the equator and Cimex lectularius in more moderate climates. Recently, both species have been found to migrate outside of their traditional zones of infestation. Cimex lectularius is the species most commonly associated with infestations in the United States. This activity presents the pathophysiology, presentation, and highlights the role of the interprofessional team in the management of bedbugs.

There are as many as 90 species of "bugs" (bed bugs are true bugs with specialized elongated mouthparts) within the family Cimicidae; however, few bite humans. The two main species that most commonly bite humans are Cimex lectularius and the tropical bed bug, Cimex hemipterus. Cimex hemipterus is usually found in the tropics within 30 degrees of the equator and Cimex lectularius in more moderate climates. Recently, both species have been found to migrate outside of their traditional zones of infestation. Cimex lectularius is the species most commonly associated with infestations in the United States.

Bed bugs are attracted by carbon dioxide and the body heat of the host.  They come in contact with the host by walking (not flying or jumping) from the crevices of material they hide in when not feeding. While humans are the preferred hosts, bed bugs can and will feed on other warm-blooded animals.  In the United States, C. lectularius can infest poultry sheds and decrease egg production. Bed bugs tend not to live on the human body. They only contact humans for a blood meal every few days if a sleeping host is available. Blood feeding typically occurs when hosts are sleeping deeply between 01:00 and 05:00 AM.  Bedbugs release aggregation pheromones, and they stay in close contact during the day while inactively sheltering in material and digesting the blood meal. The aggregation pheromones help bed bugs relocate their sanctuary after they complete a blood meal. If hosts are continually available, the female C. lectularius bed bug will lay 5 to 8 eggs per week for 18 weeks at 23°C, and at 90% relative humidity, the length of the life cycle is variable and dependent on ambient temperatures. Humans are most commonly bitten while sleeping in infested beds. Other furniture and furnishings in the same room can harbor bed bugs, and bed bugs can infest many areas that humans use.[2]

Bedbug bites are seen in equal distribution between both genders and through all ages. However, there is a prevalence noted in persons that live in population concentrated areas such as apartments, those who travel more frequently and stay in hotels, and those with lower socioeconomic conditions. Bedbug infestations are transmitted by active spreading from one living space to another through power outlets and air ducts, or colonies can be spread passively by transport in used furniture, luggage, and book bags. Skin-to-skin and direct clothing-to-clothing transfer are rare in bedbug infestations, unlike most other pests, due to the nocturnal nature of the bedbugs and the fact that they avoid moving hosts.[3]

In the vast majority of patients, the reactions from bedbug bites form as a result of an immunologic response to the proteins found in bedbug saliva. The numerous proteins in the bedbug saliva play multiple roles, including prevention of clot formation in the host, inhibition of platelet aggregation, vasodilation, and some may act as antimicrobial agents. During feeding, bed bugs inject saliva through needle-like stylets inserted into the skin for feeding and withdrawn after feeding.  C. lectularius injects nitrophorin (a vasodilator), apyrase  (a platelet-activation and aggregation inhibitor), and a factor X inhibitor.  Patients who develop papular urticaria have been noted to have IgG antibodies to C. lectularius antigens, and nitrophorin has been shown to induce allergen-specific IgE antibodies. [2]

Biopsy specimens of the bites demonstrate edema and perivascular lymphocyte and eosinophil infiltration. An inflammatory reaction is noted in the upper and lower dermis around vessels and adnexal epidermal structures. In the dermis, lymphomononuclear cells and eosinophils are noted between collagen fiber bundles as well as perivascularly. The inflammatory infiltrates noted in intraepidermal and subepidermal bullae contain lymphocytes, histiocytes, and some neutrophils and eosinophils. At this time, little is known about the progression of histopathological changes with respect to the timing of the initial bite.[2]

Bedbug bites result in various presentations among patients. Some patients show almost no visible sign of bites, with others present with large urticarial wheals greater than 1 cm and in the extremely rare reported cases of anaphylactic reactions. The bites are typically seen most often on the face, neck, hands, but can also appear on any other skin areas exposed while the patient is sleeping. A classic hallmark sign is the “breakfast, lunch, and dinner” sign seen as a grouping of bites, typically three or more, in a line or close cluster.[4] This is thought to be a result of the bedbug being disturbed while feeding or tracking for a larger superficial vessel for easier feeding. When taking a history, important questions to ask are: do the bites appear upon waking (understand the timing of the appearance of the bites); has there been recent international travel, recent domestic travel, or lodging in hotels frequented by large numbers of travelers; and was there a recent purchase of used furniture or clothes from yard sales? Not all patients bitten by bed bugs demonstrate a skin reaction. A comprehensive study of infestation in the United States reported that only 70% of those studied reported skin reactions. Patients over 65 years and children between 1 and 10 years of age reported lower reaction rates (58% and 59%, respectively).[2]

There is no standard testing performed to identify the bites from bedbugs. While one may suspect bedbug bites from an infestation based on the typical presenting signs and history, one cannot confirm the source of the bite without the capture and identification of a bedbug. There have been studies in recent years searching for a method to identify potential bedbug bites from clinical testing, such as Western blot testing, where it is unfeasible or impossible to capture a specimen. For example, an international traveler who was bitten while staying in a hotel; however, the tests are expensive and limited to specific laboratories.[5]

Reactions to bedbug bites are self-limited; once the patient is removed from the infested environment or the colony of bedbugs is exterminated, the biting stops. When patients have an intolerable pruritic reaction to the bites, symptomatic treatment is warranted. Over-the-counter systemic antihistamines and topical antipruritic creams are often effective. If the eruptions are significant enough, mild-to-moderate corticosteroid creams may be required. Antihistamines and topical therapy are used to provide symptomatic relief and reduce the risk of bacterial superinfection or cellulitis from repeated scratching.[6] As always, caution should be used when prescribing steroid creams to patients with a disrupted epidermis and possible infection. [7][8]

The overall prognosis of bedbug bites is excellent. There is no substantial evidence to suggest that either C. lectularius or C. hemipterus is a vector of any pathogen and only rarely has bed bug bites been implicated as causes of anemia or severe allergic reactions. The most common sequelae from the bedbug bites are secondary bacterial infections from scratching, sleep disturbances from the "itch-scratch cycle," and insomnia due to the anxiety of living in an infested household.[2]

To treat suspected bed bugs bites properly, patients must learn how to search for bedbug colonies, how to identify the bedbugs, and what products or extermination services should be used safely and effectively. Another key factor in the management of cases of bedbug bites is the prevention of future reinfestations of the same household. To avoid this, families should be taught how to reduce the risks such as avoiding used furniture and inspecting hotel room beds and luggage upon returning from trips.[2]

When caring for patients suffering from bedbug bites, as with many other arthropod infestations, care providers may become reluctant to have contact with the patients. This comes from the misconception that skin-to-skin contact can easily spread the bedbug infestation. For an infestation to spread, bedbugs must transfer from the places where they nest to a new host. In hospital settings, bedbug infestations occur from a colony in a patient's clothing or personal articles. Hospitals control infestations with relative ease through the cleaning process that hospital linens undergo and the fact that potentially infested bedding can be easily removed and treated.[10]

Managing patients with bites from a bedbug infestation is best approached as a team effort. The clinicians should provide the treatment and guidance to patients and families, local pharmacists help the patients find over-the-counter anti-itch creams to treat symptoms, and patients and families will work with case management and other community sources to guide and coordinate the elimination of the infestation in the patient's home. The key to bedbug bites is to prevent them in the first place. Patients who travel should check their luggage, clothes, and shoes before returning home after a stay in a hotel. It is also essential to check the hotel room for bed bugs, and if there is any suspicion of bed bugs, one should not stay in that hotel. Eradicating bedbugs from home requires a professional. These insects are very resistant to conventional insecticides, and in many cases, toys, and other items may have to be discarded. Thorough vacuuming is often necessary, combined with heat treatment. Patients should be advised against arbitrarily spraying the home with pesticides and insecticides, as this is more likely to result in toxicity to the humans rather than the bedbug. In some cases, it may take weeks or months to eradicate the bedbug.[2] 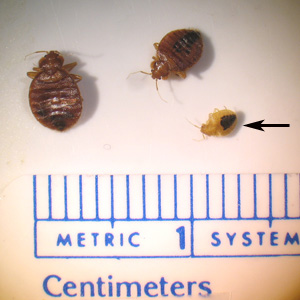 Bed bugs - Two adult and one nymph
Contributed by the CDC (Center for Disease Control and Prevention; https://www.cdc.gov/dpdx/bedbugs/index.html) 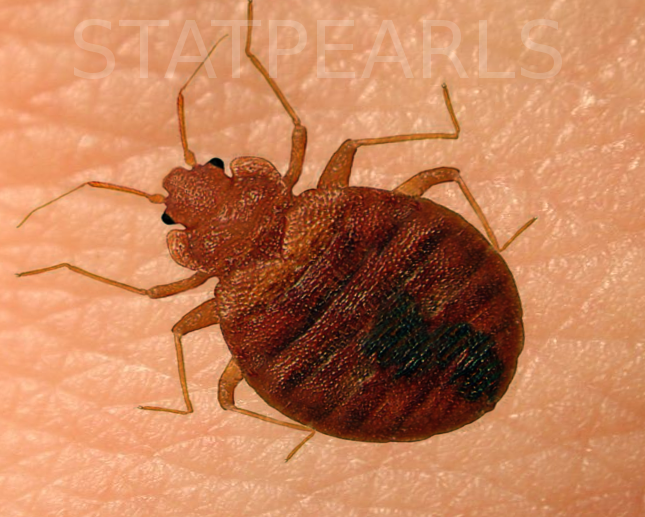