The axillary artery is classically divided into three parts.

Many variations of the axillary artery have been discovered and are discussed throughout the literature. The brachioradial artery is one of the variations in the axillary branching pattern. It is a terminal branch that has a superficial course distally. It travels through the cubital fossa, along the lateral portion of the forearm, and terminates in the deep palmar arch. This variation, along with other more rare variations discovered, has many surgical and diagnostic implications.[3]

Injuries to the axillary artery are rare but can cause limb loss. They most commonly arise from penetrating or blunt trauma to the shoulder. Examples include but are not limited to anterior shoulder dislocation, reduction of anterior shoulder dislocation, and humoral neck fracture. These mechanisms of injury may cause axillary artery rupture and subsequent thrombosis. Patients may present with pain, pallor, coldness, absent or delayed capillary refill, numbness or tingling, or lack of radial pulse to the injured limb. The collateral blood supply in the shoulder, however, may mask some of these symptoms. Thus, presentation of axillary artery injury is variable, so a high level of suspicion is essential.  [4][5][6]

Axillary artery aneurysms are one of the injuries that can occur due to penetrating or blunt trauma. They may, however, develop from atherosclerotic processes over long periods of time. They often are associated with neurological complications due to the close proximity of the axillary artery and the brachial plexus. Aneurysms may arise from improper use of crutches. Presentation of these patients may include neurological deficits of the upper limb, ischemic fingers, or occlusion of the redial and ulnar arteries due to embolization from an aneurysm. Axillary aneurysms are confirmed by imaging. CT angiography is the most useful imaging technique when diagnosing. It is currently the gold standard. An alternative imaging modality includes magnetic resonance angiography when intravenous contrast is contraindicated. Ultrasound is also very useful for detection and diagnosis. An aneurysmectomy and grafting with a saphenous vein is commonly the surgical procedure employed to reverse these complications. Another treatment option for patients is an endovascular aneurysm repair.

Axillary artery thrombosis and aneurysm may also be seen, although very rarely, in healthy athletes that preform frequent overhead throwing motions such as pitching a baseball or hitting a volleyball. In the throwing motion, the anterior displacement of the humerus places compression on the third portion of the axillary artery. Intermittent compression of the axillary artery may cause chronic changes in downstream vascular sufficiency. This could lead to subsequent thrombosis and aneurysm. Medical staff dealing with these athletes should be vigilant for symptoms of ischemic pain, cold intolerance, numbness, or arm fatigue immediately following practice or competition. Medical staff should note that symptoms will present later in the disease process due to the fact that only significant embolization or decreased blood flow causes perceptible changes in temperature or sensation. CT angiogram and magnetic resonance angiogram can be used to diagnose or screen athletes at risk of symptomatic arterial positional compression. 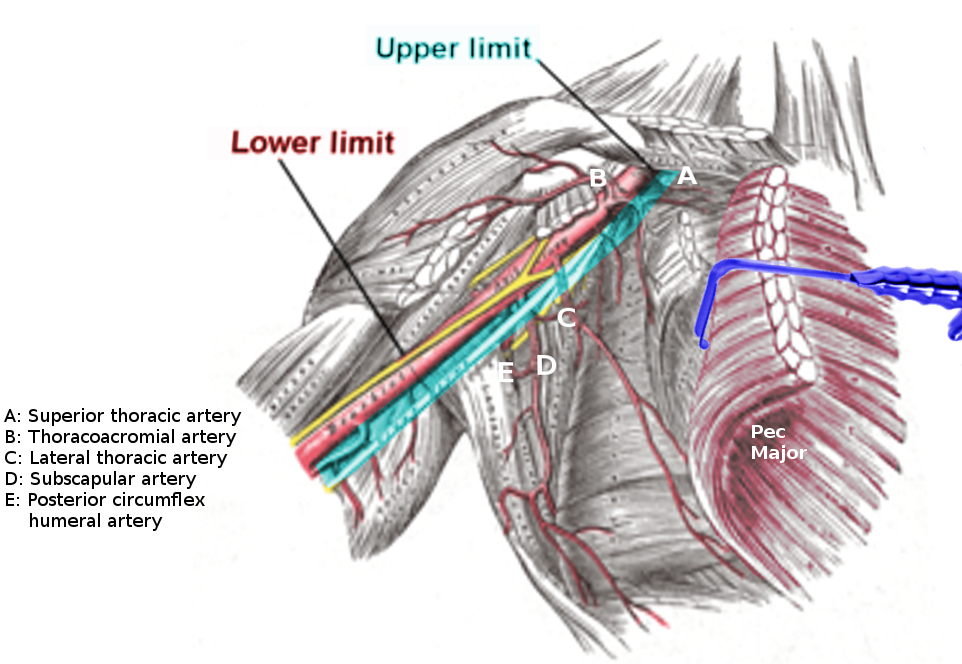