The antiarrhythmic medications have typically been categorized according to the Vaughan-Williams (VW) classification system. The system classifies the medications according to the primary mechanism of action (although several agents retain properties from multiple classes). The VW classification is traditionally broken down into four main categories, with some references adding a fifth. This activity covers the major classes of antiarrhythmic medications and reviews the indications, contraindications, activity, adverse events, and significant interactions as needed by the interprofessional health team to manage conditions for which these agents are indicated.

The antiarrhythmic medications have typically been categorized according to the Vaughan-Williams (VW) classification system. The system classifies the medications according to the main mechanism of action (although several of the agents retain properties from multiple classes). The VW classification breaks down into four main categories, with some references adding a fifth.[1][2][3]

Potassium channel blockers decrease potassium efflux out of the cell and prolong the QTc interval.

Non-dihydropyridine calcium channel blockers (diltiazem, verapamil) decrease conduction velocity, slow conduction through the AV node and are useful for ventricular rate control in both acute and chronic AF and atrial flutter. Diltiazem and verapamil are options in the acute treatment of hemodynamically stable patients with SVT,  focal, and multifocal atrial tachycardias.[7]

Class I antiarrhythmics are fast sodium channel blockers. They are responsible for phase 0 of fast-response cardiac action potentials. The three subclasses differ in their efficacy for reducing the slope of phase 0, with Ic drugs having the greatest and Ib drugs having the smallest effect on phase 0. Sodium-channel blockade: Ic > Ia > Ib. Class Ia prolongs the duration of action potential (AP), leading to an increase in QTc interval. Class Ib decreases the duration of AP, causing a shortening of QTc interval, and class Ic drugs do not affect AP duration; thus, no effect on the QTc interval.

Digoxin is a Na/K-ATPase inhibitor. By binding with the sodium pump, it increases intracellular Na+ concentration that will drive Ca2+ influx. That will lead to increase contractility of the heart and prolongation of phase 4 and phase 0 of the cardiac action potential, thus slowing down conduction through the AVN.

Antiarrhythmic medications have several areas of concern. First and foremost, most agents also have some degree of pro-arrhythmic potential. Practically speaking, while trying to suppress arrhythmias with the medications, the medications themselves can lead to other (potentially more dangerous) arrhythmias. For example, the class Ia sodium channel blockers (quinidine, procainamide, and disopyramide) all effectively prolong the QTc interval and thus increase the risk of ventricular tachycardia (torsades de pointes). Other side effects of class Ia antiarrhythmics are more drug-specific. Procainamide may induce lupus erythematosus that is reversible after discontinuation of the offending drug. An adverse effect caused by treatment with quinine is called cinchonism and includes nausea, dizziness, headache, tinnitus, and visual changes. Disopyramide has an anticholinergic effect and accounts for many adverse side effects, such as flushed and dry skin, thirst, hyperthermia, mydriasis, confusion, agitation, and urinary retention. Due to arrhythmogenic effects, class Ic antiarrhythmics are contraindicated in post-myocardial infarction patients.

Therapy with beta-blockers may have cardiovascular side effects such as bradycardia and AV block. Noncardiac side effects of beta-blockers include exacerbation of asthma and COPD, lethargy, and dyslipidemia. All K+ channel blockers share this potential side effect. The reason for this is straightforward if one compares the phases of the action potential to the ECG. The T wave on the ECG represents ventricular repolarization. Phase 3 of the action potential represents repolarization. If a K+ channel blocker is given, this prolongs phase 3 of the action potential due to the slow efflux of K+ ions. If the repolarization phase of the action potential is prolonged, the T-wave on the corresponding ECG also gets prolonged, which creates an elongated QTc interval. Amiodarone side effects are wide-ranging and include corneal microdeposits of amiodarone, hypothyroidism, hyperthyroidism, pulmonary fibrosis, elevated liver function tests, nausea, and myopathy. Drodenadrone is not for use in a patient with severe heart failure or decompensated heart failure; it should not be used in cases of permanent atrial fibrillation (see Pallas trial).

Along with its needed effects, verapamil may cause some unwanted effects such as AV block, bradycardia, and constipation. The most frequently reported side effects of diltiazem include edema, headache, and dizziness.

Minor adenosine adverse effects include flushing, a sense of impending doom, and sweating, which are usually transient due to the short half-life of the drug. More severe side effects include hypotension, chest pain, AV block, and asystole. The adverse effect of bronchospasm makes it contraindicated in asthmatic patients. Adenosine should be avoided in patients with SVT involving accessory pathways (WPW, antidromic AVRT) due to the risk of tachycardia exacerbation.

Nurses, pharmacists, and other healthcare workers who look after patients with heart disease should be very familiar with the different antiarrhythmic agents. All antiarrhythmic drugs are also potentially pro-arrhythmic. Intravenous administration should be performed only under cardiac monitoring.

Each agent in the Vaughn-Williams classification includes distinctive side effect profiles that require individual consideration. For example, procainamide may induce a lupus-like syndrome, while quinidine is known to produce cinchonism. The benefit of the classification is in the primary mechanism of action and the broad, predictable side effects brought about by the primary mechanism. An example would include the class III K+ channel blockers or "repolarization" blockers producing a prolonged phase 3 of the action potential and, by definition, also leading to a prolonged QT interval on the corresponding ECG.

Amiodarone is an excellent antiarrhythmic agent, but long-term use correlates with corneal opacities, thyroid problems, and lung infiltrates. That is why amiodarone is not preferred in young patients and preferred choice in the old population. Digoxin has a narrow therapeutic index. The therapeutic serum digoxin levels range is 0.5 to 2 ng/mL. Serum concentrations of cardiac glycosides require monitoring closely to avoid digitalis toxicity. Amiodarone, verapamil, quinidine, and diltiazem increase the serum levels of digoxin and can lead to toxicity. The recommendation is to reduce the digoxin dose by 25% to 50% with close monitoring of digoxin levels weekly for several weeks. Periodic electrolyte evaluation is a recommendation. Hypokalemia may make the patient more susceptible to digitalis toxicity. Only by being aware of the adverse effects can one reduce the morbidity associated with these agents.[12][13]

The cardiologist, or more specifically, an electrophysiologist, is generally responsible for starting the patient on an antiarrhythmic medication, but the patient requires monitoring by the primary care provider, nurse, and pharmacist. These medications are not benign, and all healthcare workers who look after patients on antiarrhythmic agents should be very familiar with the different antiarrhythmic agents. Cardiology specialty nurses are especially helpful in monitoring since they have the training to recognize adverse events, understand treatment goals, and inform the specialist or other clinicians of any concerns. The pharmacist can also be a board-certified cardiology specialist and can assist in agent selection as well as ongoing monitoring, checking for drug interactions, and maintaining communication with the prescriber. All these are examples of interprofessional team dynamics that can drive positive outcomes for patients. [Level 5]

Each agent in the Vaughn-Williams classification includes distinctive side effect profiles that require individual monitoring. If there is ever a doubt about the medication, the clinician should seek a cardiology consult. 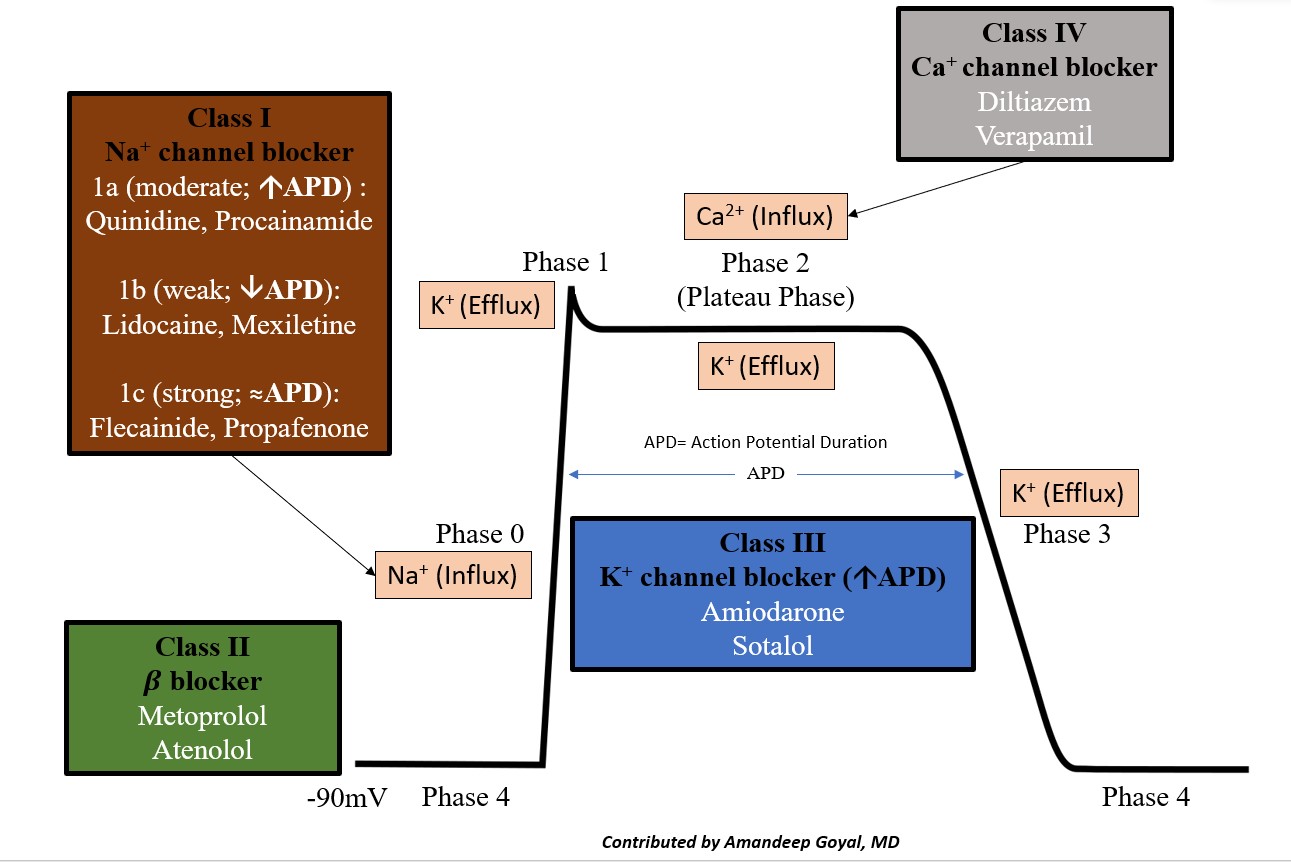