The Allen test (AT) is used to assess collateral blood flow within the hands, specifically testing for the presence of a complete palmar arch. Edgar Van Nuys Allen first described it in 1929. Dr. Allen was born on June 22, 1900, in Cozad, Nebraska, United States. He was a specialist in cardiovascular medicine and known for his research in peripheral vascular disease. In 1929, Irving S. Wright suggested an altered version of the Allen test that has almost universally replaced the original method. It is referred to as the modified Allen test (MAT).[1][2]

The blood supply to the arms is supplied by the left and right subclavian arteries which arise from the brachiocephalic trunk of the aorta. The subclavian arteries then run beneath the clavicle and are then referred to as the axillary arteries as it reaches the axilla. From there, the axillary artery which supplies blood to the upper arm will continue to travel to the antecubital fossa where it divides into the radial and ulnar arteries. The radial and ulnar arteries supply blood flow to the forearm and eventually to the hand. The radial artery runs along the lateral aspect of the forearm between the brachioradialis and flexor carpi radialis muscles. At the wrist, it splits into superficial and deep palmer branches. The ulnar artery runs along the medial aspect of the forearm and at the wrist runs through Guyon's canal where it splits into its deep and superficial palmer branches. These arches form the basis of collateral blood flow to the hands.

The radial artery is easily palpable. The need for this test arises from the inability to palpate the ulnar artery. Because the ulnar artery cannot be palpated its patency cannot be assessed, and therefore, collateral circulation of the hand cannot be confirmed. If the radial artery needs to be cannulated or catheterized and there is a risk for thrombosis, then the Allen test can help confirm that the hand will maintain adequate blood flow through the ulnar artery and collaterals in the event it becomes occluded. A positive Allen test means that the patient does not have an adequate dual blood supply to the hand which would be a negative indication for catheterization, removal of the radial artery or any procedure which may result in occlusion of the vessel.[3][4][5]

The original Allen test can be performed by asking the patient to elevate both their hands above their head for thirty seconds. This will help with draining blood from the patient's hands. Next, the patient is then asked to squeeze their hands into tight fists, and the radial artery is occluded simultaneously on both hands. The patient then opens both hands rapidly, and the examiner will compare the color of both palms. The initial pallor should be replaced with the normal erythematous color of the hand as the blood from the collateral flow returns. The test is then repeated while occluding the ulnar arteries instead of the radial arteries. The time it takes for the normal color to return helps indicate the degree of collateral blood flow. It is referred to as a negative test when there is a return of normal color to both hands during occlusion of either artery alone. A positive test will be when there is persistent pallor in the palm indicating no collateral blood flow to the hand.

The modified Allen test differs mainly by examining both radial and ulnar arteries on the one hand and then repeated on the other side. Traditionally, it is performed by first having the patient's arm flexed at the elbow with the fist clenched tightly or by asking the patient first to open and close their fist to help increase the draining of blood from the hand. The ulnar and radial arteries are then compressed by the provider’s thumbs simultaneously. The elbow is then extended to no more than 180 degrees, avoiding overextension as that could lead to a false-positive test. The fist is then unclenched, and the palm should appear white. The compression is then released from the ulnar artery while maintaining pressure over the radial artery (see image). Once the compression is released color should return to the palm usually within 10 seconds. The test is repeated on the same hand while releasing the radial artery first and continuing to compress the ulnar artery.

In a patient with normal patent arteries, the color should return to the palms relatively quickly (within 10 seconds) after the release of either artery. If pallor persists within the palm after the patient unclenches his fist and one of the arteries is released, then the test is positive and indicative of an occlusion within the artery that is being released. For example, if the radial artery is being compressed and palmar pallor persists then that is indicative of compromised blood flow of the ulnar artery. The same is true if the ulnar artery is compressed and palmar pallor persists then the compromised blood flow is in the radial artery.

There are additional tools the provider can use to make this test more accurate. Digital plethysmography, duplex ultrasonography with dynamic testing, and pulse oximetry (often with the sensor placed on the thumb tip) can all be used. [6] Concomitant use of pulse oximetry while performing the allen is the easiest of these methods. The technique involves placing a pulse oximeter on the forefinger prior to compression to get a baseline saturating and waveform. The provider will then compress both radial and ulnar arteries until the waveform disappears the saturation reads zero. The pressure on the ulnar artery is then relieved. The waveform and the saturation are recorded. If these values are consistent with the baseline, it infers good collateral flow. [6]

There are no known complications other than those caused by not performing the procedure or performing it incorrectly. Rarely, radial arterial blood sampling/cannulation, including disruption of the artery due to clot obstruction, places the hand at risk of ischemia. Individuals without a dual supply are at much greater risk of ischemia.

The AT and MAT tests are used to ensure collateral circulation of the hand. The test can be used as a diagnostic tool for any number of disorders with a reduced vascular flow to the arm or after operations on the hand. More commonly,  it is used to assess collateral flow to the hand through the ulnar artery when the radial artery is going to be used for arterial punctures for drawing blood gases, cannulation for placement of arterial lines, catheterizations or radial artery harvest for bypass surgeries. These procedures are typically done involving the radial artery because of its easily palpable nature at the bedside. One of the risks associated with arterial punctures includes ischemia distal to the puncture site which could lead to compromise of the limb if there is not adequate collateral blood flow. Though ischemia is a rare complication associated with an arterial puncture, in most patients, in the clinical setting the Allen test is not often performed. There is weak evidence supporting the accuracy of this test in assessing ulnar artery patency and ensure collateral circulation. Overall, the AT and MAT have low sensitivity to evaluate collateral circulation.

Healthcare workers including nurse practitioners, respiratory therapists, and clinicians who work in the ICU should always perform an Allen test before cannulating the radial artery. The occasional patient may develop hand ischemia and one should remove the arterial cannula, or risk severe gangrene and necrosis of the hand. 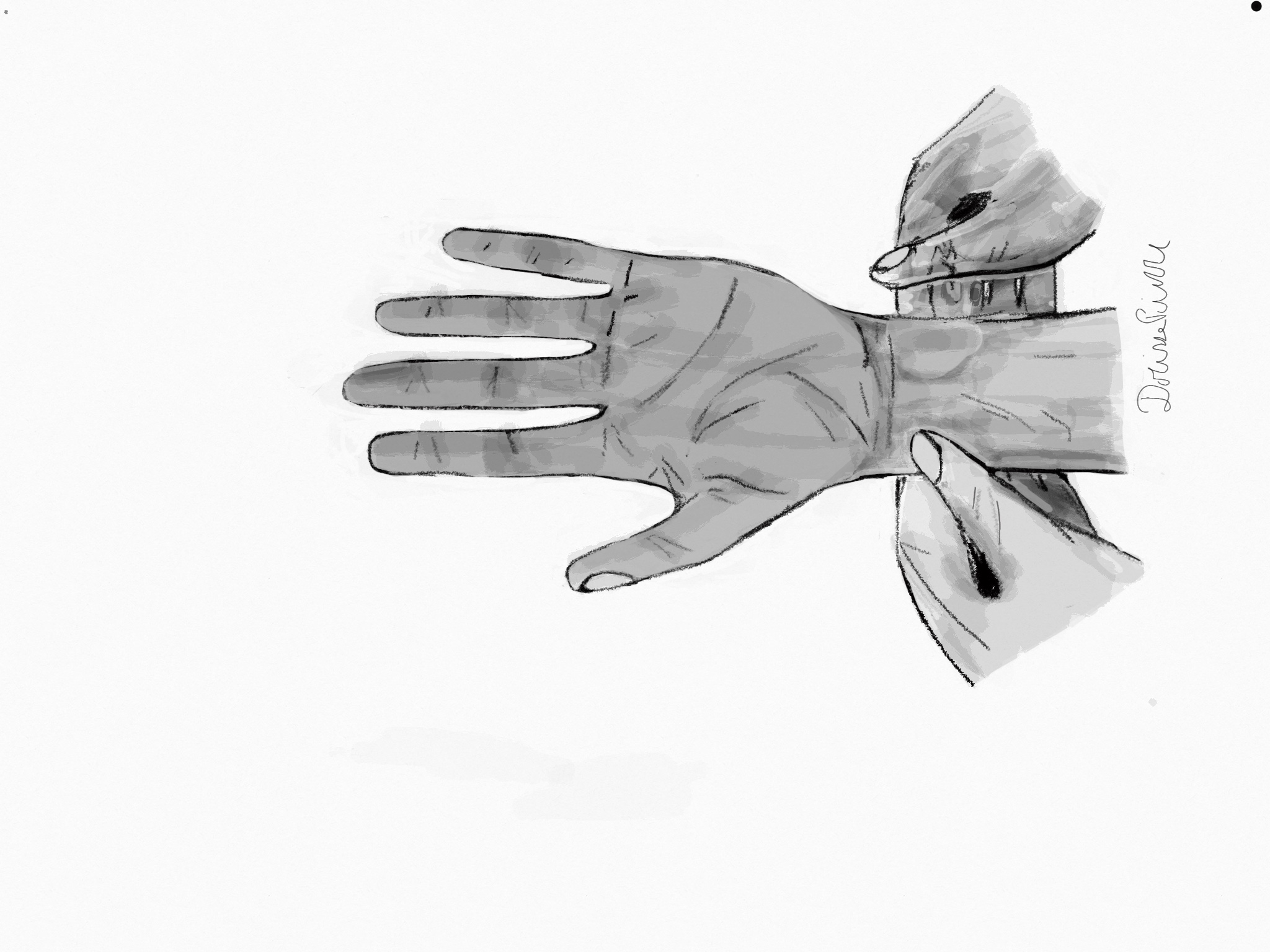 Allen test (2) Compression of the radial artery and release of the ulnar artery
Contributed by Dorisse M. Pierre