To be skillful at airway management, the provider must know the critical anatomical, physiological, and pathological features related to the airway. They should also be aware of the various tools and methods that have been developed for this purpose. It is additionally important to know the indications, contraindications, and complications of endotracheal intubation. It is vital to understand how to assess the confirmation of proper endotracheal tube placement. Additionally, knowing the differences between the adult, pediatric, and neonatal airways and being well versed with difficult airways is vital as these can significantly impact safe and effective airway control.[1]

The four principals of airway management in Advanced Cardiovascular Life Support are:

The pediatric airway is narrowest at the subglottis (as opposed to the adult airway, where the glottis is the narrowest point) and is located cephalad and more anterior when compared to the adult airway. Children 12 years or younger have a smaller cricothyroid membrane, and their larynx is more compliant, funnel-shaped, and rostral in position. The larger occiput combined with a shorter neck makes laryngoscopy relatively more difficult, providing obstacles to the alignment of the oral, laryngeal, and tracheal axes. It often requires a folded towel or shoulder roll to achieve a neutral position of the neck and open the airway.[1] Proper positioning of any airway is vital for successful intubation, and it is important to know differences when compared to the adult patient.

The dimensions of the trachea depend on the age and sex of the child. Please see Table 1. There are different formulas to select the proper size of the ET tube.

For children aged 1 month to 6 years, ultrasound measurement of subglottic airway diameter better predicted appropriately sized endotracheal tube than traditional formulas using age and height. This may not be practical in an urgent or emergent situation, so familiarity with the airway sizing algorithms above is paramount.[2] Cuffed ET tubes are preferable to decrease the air leak, pressure necrosis in ventilated patients, as the incidence of laryngospasm may be higher with uncuffed ET tubes in prolonged intubation. These advantages must be weighed against the relatively larger diameter of the cuffed tube, which may trigger laryngospasm during intubation. Video-assisted laryngoscopy equipment is a more recent adjuvant in airway management that facilitates effective visualization of the airway.[3]

Indications for intubation to secure the airway include respiratory failure (hypoxic or hypercapnic), apnea, a reduced level of consciousness (sometimes stated as GCS less than or equal to 8), rapid change of mental status, airway injury or impending airway compromise, high risk for aspiration, or 'trauma to the box (larynx),' which includes all penetrating injuries to the neck, abdomen, or chest.

Upper airway obstruction can be relieved by head tilt, chin lift, or jaw thrust. In infants and children, a simple suctioning of the airway will help with the clearance. The bulb syringe or any other mechanical suction device can clear mucus or other debris from the airway. When using a bulb syringe to suction an infant, it is important to suction the mouth before the nose to avoid aspiration. The first step is to depress the bulb syringe and then place it in the mouth, then the nose. Infants are prone to vagal stimulation, and suctioning can lead to bradycardia. Suction must not last for over 10 seconds.

Oropharyngeal airway: One cannot use an oropharyngeal airway in patients with a severe gag reflex or oral trauma, as it could stimulate this gag reflex and lead to aspiration of gastric contents. Different sized oral appliances are available. They are measured and sized from the lip to the angle of the jaw and are useful for patients with spontaneous respirations who need help to keep their airway open (sleep apnea patients, for example).

Nasopharyngeal airway: This is used in patients with an intact gag reflex, trismus, or oral trauma, or those who have undergone oral or oropharyngeal surgery where the oral cavity should not be instrumented. The important factor in sizing a nasopharyngeal airway (NPA) is not only the tube's width (which may be dictated by nostril aperture diameter or nasal septal and turbinate position) but also the stature of the subject. The average adult male needs a size 7 port, and the average female needs a size 6 port. A tall male requires size 8, and a tall female requires size 7, as the patient's vertical height roughly corresponds to the anteroposterior length of the midface, and thus, nasal cavity.[5]

A study of 413 infants under 12 months found an association between subject height and nares-vocal cord distance. To place the NPA in infants, the insertion length must, therefore, be slightly less than the anthropometric measurement of nose tip-earlobe distance.[6]

A properly performed mask ventilation is the fundamental maneuver in airway management. Both in adults and children, there are one- and two-hand techniques. For neonatal airway, one hand technique is usually effective, as a single hand can often perform all necessary maneuvers.  One can relieve the upper airway obstruction encountered during simple mask ventilation via head tilt, chin lift, jaw thrust, and the application of continuous positive airway pressure. Bag-mask ventilation is also appropriate while preparing to intubate.

Laryngeal mask airway: A relatively recent advancement is the development of the supraglottic airway. Many devices exist. Two of the more popular supra-glottic devices, the classic laryngeal mask airway (LMA) and pro-seal LMA, have good data in the pediatric population to support their safety and efficacy. We recommend using a manometer to gauge the inflation pressure of the cuff of the LMA. Children with a recent upper respiratory infection have an increased incidence of respiratory complications with the use of LMA as compared to healthy children. In the pre-hospital setting, they often use supraglottic devices such as the King tube instead of an endotracheal tube because of the ease and speed with which it can be deployed. This facilitates the rapid establishment of a more secure airway, particularly in an emergent setting where emergency medical technicians or other personnel may be establishing a pediatric airway and may not be as comfortable in doing so.

This is a supraglottic airway device now frequently used by many emergency medical personnel that intentionally intubates the esophagus, but the design of the device allows ventilation via a two-cuffed system and a ported tube. They are popular because of their ease of administration. They come in different sizes, but their routine use does not routinely extend to pediatric airway management.

Oxygen is a critical component of airway management. Pre-oxygenation with nasal cannulae, bi-valve mask, high flow oxygen, or bi-pap before the intubation can deliver the much-needed oxygen prior to intubation attempt.

Some physicians consider the Bougie, which is a long, semi-rigid plastic device (a plastic stylet) as an adjunct or rescue device in difficult intubations, or as a part of the primary intubation algorithm.

Ideally, at least two additional staff members should be available to assist the primary physician performing the intubation. They can help with the administration of medications, bagging the patient, and monitoring the patient. The team typically should include a physician, respiratory therapist, nurse, nursing technician, paramedic, or advanced practice provider.

After pre-oxygenation with cricoid pressure and in-line cervical stabilization, rapid-sequence induction, followed by direct laryngoscopy (DL), is the safest and most effective approach.

The four D’s of the Difficult Airway

Following are the dosages of RSI medications:

The technique for intubation includes pre-oxygenation, administration of rapid sequence medications, application of cricoid pressure, and in-line cervical stabilization followed by laryngoscopy (direct or indirect). It is the safest and most effective approach.

The gold standard for assessing an ET placement is direct visualization with the help of a laryngoscope. Additional ways to assure proper confirmation of endotracheal tube placement include end-tidal carbon dioxide measurement, capnography waveform, chest X-ray, ultrasound, and clinical assessment.  The American Heart Association recommends continuous waveform capnography besides clinical assessment as the most reliable method of confirming and monitoring the correct placement of an ET tube. Bedside mobile ultrasound is another resource that some emergency departments have to confirm the position of the ET tube. Many clinicians frequently use a chest X-ray to assess the placement of the ET tube. The optimum position of the ET tube is 2 centimeters above the carina. Complications of endotracheal intubation can include esophageal intubation or right mainstem intubation. When blind endotracheal intubation takes place, the tube may go down the right mainstem bronchus. One could reposition the tube if abnormal tube placement is seen in an X-ray or if a flat capnography waveform is noted and 0 mm Hg in the documented value, as 35 to 45 mm Hg is the expected normal range for appropriate endotracheal tube placement. Clinically, abnormal tube placement can be diagnosed with absent breath sounds on the left chest if right mainstem intubation has occurred, and no breath sounds will be heard bilaterally if abnormal esophageal intubation has occurred. Additionally, with esophageal intubation, air may be auscultated in the mid epigastric region upon ventilation administration. Lastly, low oxygen saturation will be noted. Once appropriate confirmation of the endotracheal tube is noted, it is essential to secure the ETT properly to assure it is not dislodged. Then continuous monitoring with waveform capnography and pulse oxygen monitor is performed.

Trauma is a leading cause of morbidity and mortality worldwide, especially for people aged 15 to 50. Trauma is the second-most common single cause of death, representing 8% of all deaths. The World Health Organization estimates that traumatic injuries from traffic accidents, drowning, poisoning, falls, burns, and violence kill over five million people worldwide annually, with millions more suffering from the consequences of injuries.

Rapid evacuation and transportation to a trauma center improve the outcome of severely injured patients. Prehospital intubation is controversial in the EMS literature. The medical director of an EMS service will dictate the clinical context in which he/she will allow a paramedic to intubate in the field.  The EMS service monitors and transports these patients quickly and safely to the nearest trauma facility.

The age of the child is the only absolute contraindication to surgical cricothyroidotomy. The exact age at which they can safely perform a surgical cricothyrotomy is controversial and not well defined. Various sources list lower age limits ranging from 5 to 12 years, and Pediatric Advanced Life Support defines the pediatric airway as age 1 to 8 years.

When intubating a patient who suffered injuries to the chest, pay attention to the complications that could arise after the intubation, like tension pneumothorax or air leak from a bronchial injury. Patients with pneumothorax should have a chest tube before the intubation. In cases of bronchial injury, intubation can precipitate a massive air leak. Sometimes the physicians occlude a segment of the damaged lung with a bronchial blocker to avoid air escape.

All the personnel involved should regularly sharpen their skills either in the field or in the simulation lab. Proper training of the personnel played a bigger role in improving the success rates of intubation, the decrease in mortality rate than the field of medicine they specialized in.[7] [Level 3]

Emergency physicians use either length or weight-based estimation to select the correct endotracheal tube for intubation.[8] [Level 3]

For difficult airways, a camera-based laryngoscopy is better than the direct laryngoscope for the first pass success of the intubation.[9] [Level 1] 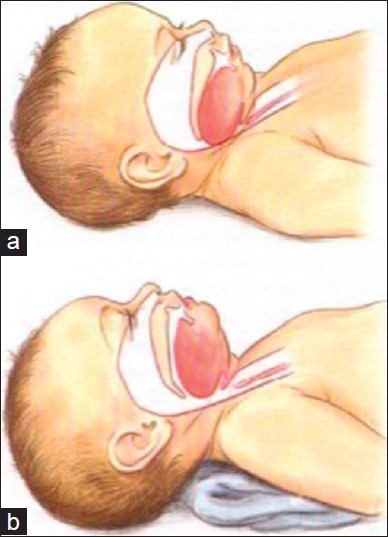 Figure 1: Artistic rendering of infant airway. (a) In image a note the large occiput which has caused flexion of the head and subsequently caused the base of the tongue to obstruct the upper airway. This obstruction has been relieved (b) by placing a towel under the shoulders and neck allowing more extension of the head and an opening of the upper airway
Contributed by Harless J, Ramaiah R, Bhananker SM. Pediatric airway management. Int J Crit Illn Inj Sci [serial online] 2014 [cited 2017 Dec 3];4:65-70. Available from: http://www.ijciis.org/text.asp?2014/4/1/65/128015