The airway, or respiratory tract, describes the organs of the respiratory tract that allow airflow during ventilation. [1][2][3]They reach from the nares and buccal opening to the blind end of the alveolar sacs. They are subdivided into different regions with various organs and tissues to perform specific functions. The airway can be subdivided into the upper and lower airway, each of which has numerous subdivisions as follows.

The pharynx is the mucous membrane-lined portion of the airway between the base of the skull and the esophagus and is subdivided as follows:

The larynx is the portion of the airway between the pharynx and the trachea, contains the organs for the production of speech. Formed of a cartilaginous skeleton of nine cartilages, it includes the important organs of the epiglottis and the vocal folds (vocal cords) which are the opening to the glottis.

The trachea is a ciliated pseudostratified columnar epithelium-lined tubular structure supported by C-shaped rings of hyaline cartilage. The flat open surface of these C rings opposes the esophagus to allow its expansion during swallowing. The trachea bifurcates and therefore terminates, superior to the heart at the level of the sternal angle.

The bronchi, the main bifurcation of the trachea, are similar in structure but have complete circular cartilage rings.

Bronchioles lack supporting cartilage skeletons and have a diameter of around 1 mm. They are initially ciliated and graduate to the simple columnar epithelium and their lining cells no longer contain mucous producing cells.

Alveolar is the final portion of the airway and is lined with a single-cell layer of pneumocytes and in proximity to capillaries. They contain surfactant producing type II pneumocytes and Clara cells.

Airways allow airflow in ventilation from the external environment to the respiratory surfaces where gas exchange for respiratory processes can occur.[4][5]

To allow this and to maintain homeostasis and adequate protection from the external environment they must also perform other barrier functions.

The upper airways develop from the pharyngeal arches as part of the embryological development of the head and neck structures.

At around four weeks, the larynx and lower airways develop from the longitudinal laryngotracheal groove which forms a medial, groove-like structure becoming a tubular, blind-ended structure called the laryngotracheal diverticulum. This eventually separates from the developing foregut by the formation of the tracheo-oesophageal folds.

The laryngeal cartilages and musculature develop from the four and six pharyngeal arches, and the glottic opening forms connecting this region to the trachea.

The trachea forms from the extension of the laryngotracheal diverticulum, and it is lined with endodermal tissue which forms the specialized respiratory linings and mesodermal structures that form the cartilage and smooth muscle walls.

As development continues, the laryngotracheal diverticulum continues to branch and bud and forms the bronchi and branching bronchioles.

From 16 weeks onward, respiratory surfaces begin to form, and the maturation of the lungs develops with alveolar sacs forming and pneumocyte development forming the respiratory membrane.

The formation of the alveoli and the respiratory membrane is not complete until after birth, and alveolar formation continues until the age of eight.

The lower airways receive blood flow from two sources: the pulmonary circulation and the bronchial circulation.

Bronchial circulation provides oxygenated blood to the airway structures themselves. These arteries arise independently from the systemic circulation. The two left bronchial arteries emerge from the thoracic aorta; whereas, the right bronchial artery arises either from one of the superior posterior intercostal arteries or a common trunk with the left superior bronchial artery. These provide nutrition and oxygen to tissues as far as the end of the conducting airways where they anastomose with the pulmonary circulation.

The bronchial veins are only present near the lung hilum which drain blood from the trachea, and bronchi drain into the azygos vein on the right and either the accessory hemiazygos veins or the intercostal vessels on the left. Pulmonary veins drain the more distal circulation where a small amount of deoxygenated blood makes a minimal impact on the saturation of the returning blood.

Lymphatic drainage of the lower airways is through the deep lymphatic plexuses of the pulmonary lymphatic plexuses. These drain to the superior and inferior tracheobronchial lymph nodes bilaterally and then to the right and left ducts connecting to the venous angles, usually directly but on the left, this may converge with the thoracic duct first.

Paratracheal nodes drain lymph from the trachea directly into the right and left lymphatic ducts.

The lower airways receive parasympathetic fibers from the vagus, some of which are afferent sensory nerves that transmit cough sensations from specialized J receptors in the mucosa as well as stretch receptors from the bronchial muscles and inter-alveolar connective tissues. The efferent fibers of the vagus cause broncho-constriction and secretion from the glandular tissues in the airways. The efferent sympathetic fibers cause bronchodilation by inhibiting the activity of the smooth muscles of the airways.

The muscles of the pharynx and larynx provide the structure of the upper airways and form from striated muscles under visceral and somatic control. They relate to the action of swallowing.

The lower airways have a layer of smooth muscle within their walls. It is present along all of the conducting airways and allows for visceral control of bronchoconstriction

The anatomy of the airway is important in all trauma and emergency surgical scenarios. As in any emergency assessment, a practitioner should know it is most important to consider and evaluate the patent airway.[6][7][4][8]

The upper airways can be controlled using airway devices and bypassed using endotracheal intubation. If this is not possible, emergent surgical access to the airway is imperative and is performed through an emergency cricothyroidotomy.

Airway assessment is relevant to many common surgeries:

The importance of the upper airway assessment is paramount in both emergency and anesthetic scenarios.[9]

The upper airway assessment can be performed and enhanced by the following assessment tools:

The cricoid cartilage is important both as a clinical landmark and also as the only complete cartilage ring within the upper airway used during cricoid pressure maneuvers.

The narrowest portion of the upper airway is the cricoid cartilage in children; therefore, cricothyroidotomy is not recommended in children younger than the age of eight. As children grow and mature, the glottic opening becomes the most narrow point in the airway, and therefore, the most likely point of obstruction and allows bypass by the insertion of a cricothyroidotomy airway.

The trachea is the most anterior structure of the neck except for where the thyroid covers it. This means that it can be accessed to provide an airway in both emergencies (cricothyroidotomy) and elective procedures (tracheotomy).

The trachea should align with the sternal notch. If this alignment deviates, it can indicate a lung or mediastinal pathology.

The right, main bronchus is shorter, wider, and vertically aligned, and this means it is the most common site for aspiration, both in a foreign body aspiration and during the occurrence of an aspiration pneumonitis causing right lower lobe consolidation.

In clinical assessment of the lower airways, through auscultation and by the presence of "wheezing" as turbulent airflow generates a musical noise, airway narrowing through edema or bronchoconstriction can be detected. 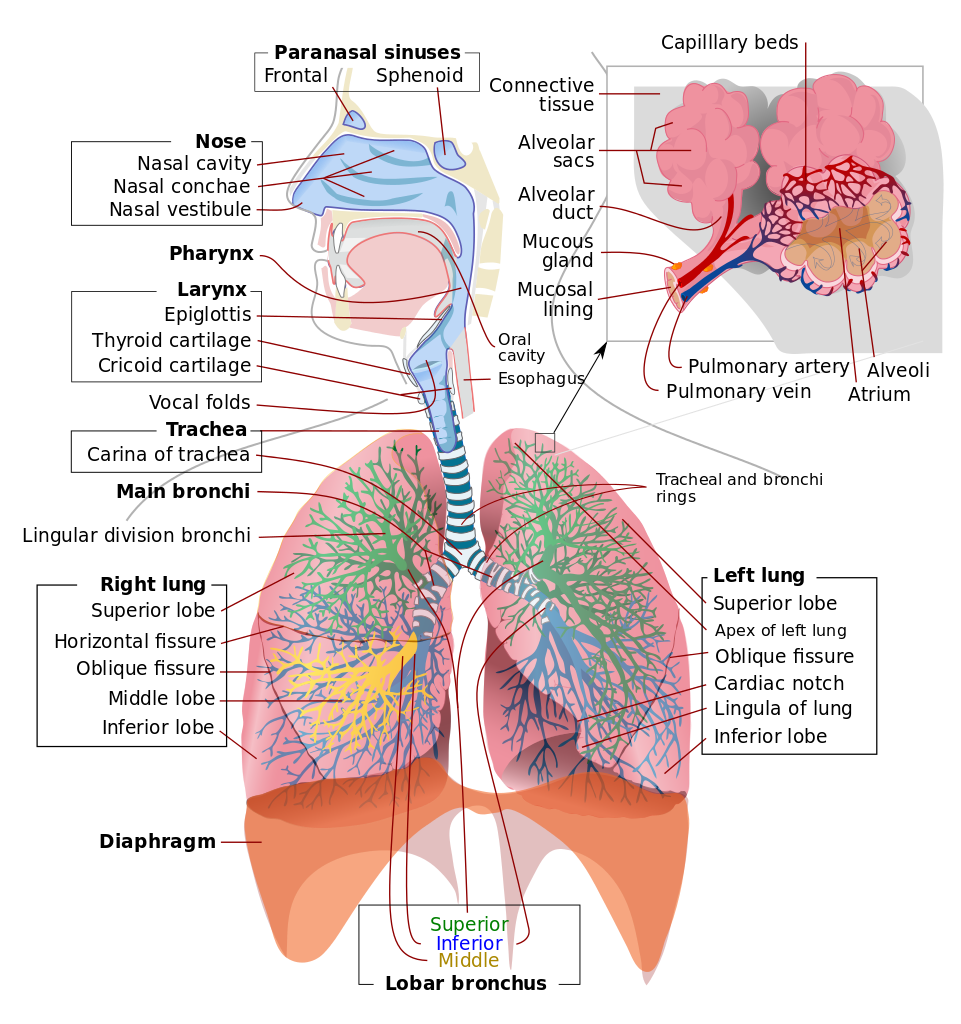 The respiratory system consists of the airways, the lungs, and the respiratory muscles that mediate the movement of air into and out of the body
Contributed by Wikimedia Commons, LadyofHats (Public Domain)