The most widely accepted grading system for fetal echogenic bowel compares the echogenicity of the fetal bowel with that of the fetal iliac crest. This classification was developed by Slotnick et al.[1] It is outlined as follows:

The grading system is dependent on the subjective assessment of the sonologist and thus can be associated with significant inter and intra-observer variability. Furthermore, the transducer frequency and grading can affect this scoring. With the advancement of technology and the availability of high-frequency transducers, echogenic findings can be exaggerated, leading to an overdiagnosis of the fetal echogenic bowel.[3] Hence, the recommendation is to use a lower frequency transducer (<5 MHz) at a lower gain setting.[4]

Fetal echogenic bowel was initially described as a normal variant and a transient fetal finding. The majority of fetuses with an isolated echogenic bowel have normal short-term and long-term neonatal outcomes.[5][6]

The incidence of echogenic bowel varies from 0.2 to 1.8 % in the prenatal sonogram performed in the second trimester.[10] The variability in the incidence between different studies could be attributed to the high-risk population in some samples.

This variability could also be attributed to the fact that the detection of echogenic bowel is prone to significant inter-observer variability since the diagnostic criteria are based on a subjective assessment which is prone to over or underestimation of the finding based on the level of expertise of the sonographer as well as the frequency and the gain settings of the ultrasound machine.[11]

The pathophysiology of the echogenic bowel is speculative and has not yet been fully established. The fetus begins to swallow amniotic fluid by the end of the first trimester, which transits through the intestines. When this passage is slow or obstructed, contents in the bowel can become progressively thick and lead to a bright appearance in the ultrasound. The pathophysiology can vary depending on the underlying etiology. The primary mechanism may involve meconium stasis, or hypercellular meconium can occur for several reasons.[11] These include the following:

Infants with abnormal karyotypes can have decreased levels of microvillar enzymes leading to hypoperistalsis and further impeding the passage of meconium in utero. This meconium can be inspissated, especially in the second trimester when the bowel lumens are small. As the pregnancy progresses, the amount of fetal swallowing of amniotic fluid increases, as does the small bowel volume resulting in the resolution of meconium stasis and, in turn, leads to the resolution of the hyperechogenic appearance of the bowel.[12]

The pathophysiology of the association between the echogenic bowel and TORCH infection is also thought to be a result of the direct viral-induced cytotoxic effect and ischemia of the endothelial cells in the fetal bowel leading to hypoperistalsis, ileus, or fetal intestinal perforation.[13]

Proximal bowel obstruction can interfere with normal amniotic fluid swallowing and lead to decreased fluid content in meconium which subsequently leads to the formation of meconium plugs which can be identified as increased echogenicity.[14]

Conditions such as cystic fibrosis can lead to abnormality in the enzyme secretion leading to abnormal consistency of the meconium, which is usually detected as diffusely increased echogenicity of the bowel along with bowel dilatation and calcification.[15]

Swallowed blood products due to maternal-fetal hemorrhage or intrauterine transfusions can also lead to hypercellular meconium and the finding of echogenic bowel.[14]

Other possibilities, such as compromised placental and fetal perfusion leading to the redistribution of blood flow and, subsequently, gut ischemia, have been postulated.[16]

The postnatal examination should focus on detecting any congenital anomalies. A thorough abdominal exam can give clues such as palpable loops indicating bowel obstruction. The patency of the gastrointestinal tract should be confirmed.

A pragmatic approach should be adopted while investigating pregnancies with the finding of fetal echogenic bowel in the second trimester.[7] Risk stratification should be done based on grading and additional risk factors. Further evaluation should be offered, and an interdisciplinary team, including a genetic counselor, neonatologist, and maternal-fetal medicine, should be involved.

A detailed ultrasound evaluation should be performed to assess for additional markers or features suggesting chromosome abnormalities (e.g., nuchal translucency, cardiac anomalies). Further genetic screening, including cell-free fetal DNA testing or a quad screen, should be offered. In pregnancies with additional risk factors (high risk based on risk stratification, other soft markers, positive screening testing), amniocentesis and chromosomal microarray analysis may be offered.

Serological testing for infections such as toxoplasmosis and cytomegalovirus helps detect recent or past infections. Cystic fibrosis screening should be performed if not already done as a part of routine screening.

Serial sonographic monitoring is important even in pregnancies with normal screening test results to detect the progression as well as additional abnormalities. For example, in cases of intestinal obstruction, fetal echogenic bowel may be the initial sonographic finding. On serial sonographic screening, other markers such as dilated bowel loops and abnormal peristalsis will be detected.

Diagnosis of echogenic bowel in the second-trimester warrants thorough antenatal and postnatal follow-up due to the increased risk of fetal abnormalities.

Assessment of amniotic fluid is also helpful in detecting maternal-fetal hemorrhage as a cause of the echogenic bowel. Screening for conditions such as cystic fibrosis using parental career screening and serological testing for TORCH infections should be considered.[4]

Serial sonographic screening throughout the pregnancy is recommended for reassessment and to monitor associated conditions such as IUGR, bowel dilatation, and polyhydramnios which are shown to be associated with adverse outcomes.[14]

The Association of gastrointestinal abnormalities and other comorbidities in infants with a diagnosis of fetal echogenic bowel highlights the need for these deliveries to be referred to a center with a higher neonatal intensive care unit with pediatric subspecialty services. Postnatally, a thorough clinical examination of the infant must be performed. Abdominal X-ray, UGI series, barium, or gastrograffin enema may be required to evaluate for intestinal obstruction.[19]

Passage of meconium and normal feeding pattern should be ensured. In certain cases, testing for congenital infection, CF screening, and karyotyping may be warranted.

Fetal echogenic bowel is considered a soft marker and, when detected in a prenatal ultrasound, should prompt further evaluation to detect additional abnormalities. As discussed above, multiple etiologies can lead to the finding of echogenic bowel.

The following differentials should be considered while evaluating fetal echogenic bowel:

It may be possible to differentiate these based on additional clues to the underlying etiology. For example, additional abnormalities like a congenital heart defect or a thick nuchal cord may point towards aneuploidies, features of fetal ascites or hydrops may point towards an infective etiology, whereas thickened dilated bowel wall associated with obstruction or calcification may indicate cystic fibrosis.[19]

The prognosis of Echogenic bowel depends upon the underlying pathophysiology.[20] Isolated echogenic bowel can be a benign finding with normal neonatal outcomes. However, outcomes can be impacted when the fetal echogenic bowel is associated with other ultrasonographic markers or pregnancy complications.

Pregnancies complicated by fetal echogenic bowel and associated with other anomalies, fetal growth restriction, elevated alpha-fetoprotein (AFP), or progressive worsening in grading are associated with less favorable to poor outcomes.[10]

As the pathophysiology of fetal echogenic bowel is multifactorial, complications are mainly attributed to the underlying pathology. In pregnancies associated with IUGR or elevated AFP, complications may arise from underlying placental-fetal bleeding or congenital anomalies.

The association between echogenic bowel and Intrauterine fetal death (IUFD) may be related to underlying uteroplacental insufficiency.[21]

Management of the echogenic bowel requires a multidisciplinary approach with the involvement of the following specialties:

Mothers diagnosed with fetal echogenic bowel should receive counseling regarding the importance of serial sonographic evaluations. In the presence of additional anomalies, genetic workup should be encouraged.

Fetal echogenic bowel is an uncommon but significant finding in second-trimester ultrasound and requires further sonographic screening. A well-structured grading system suggested by Slotnick et al. should be used while reporting the finding to reduce the diagnostic subjectivity.[1]

Given the broad differential diagnosis, further screening should be offered to identify the underlying etiology. Providers must counsel parents counseling should be done promptly to understand the implications of this finding. A shared decision-making framework between the medical team and the parent is necessary while considering further screening and diagnostic tests.[4]

In fetuses with normal screening, the finding of echogenic bowel may pose a significant dilemma for antenatal counseling. Fetal MRI may be a consideration in high-risk cases. 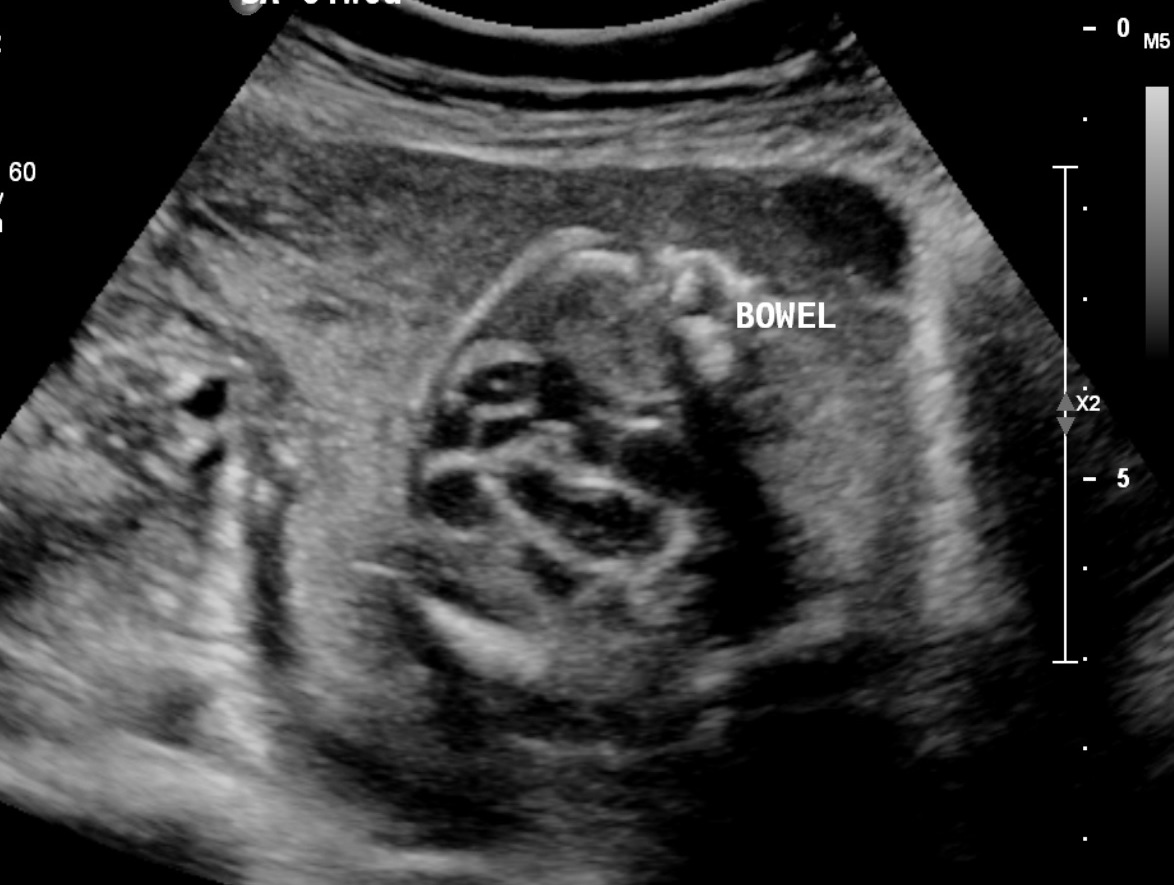 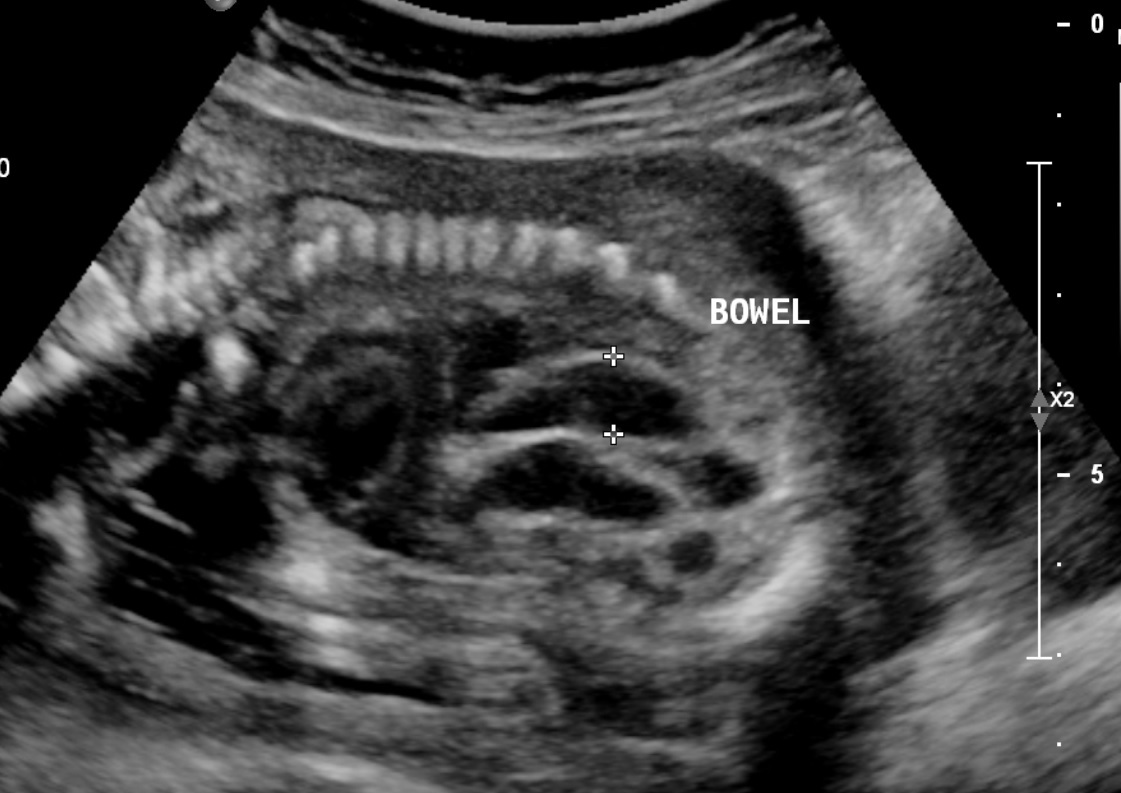 Vincoff NS,Callen PW,Smith-Bindman R,Goldstein RB, Effect of ultrasound transducer frequency on the appearance of the fetal bowel. Journal of ultrasound in medicine : official journal of the American Institute of Ultrasound in Medicine. 1999 Dec;     [PubMed PMID: 10591442]