The human tongue is an organ that aids the process of digestion by facilitating the manipulation and movement of food particles during mastication and swallowing. The tongue is also vital in the production of speech and essential for employing the sense of taste.

The styloglossus muscle functions to retract and elevate the tongue in a posterior and superior fashion. Following mastication, these movements promote passage of the food bolus towards the oropharynx.[4]

Venous drainage of the tongue is via deep lingual veins and a single dorsal lingual vein; these vessels drain into the sublingual vein, which in turn empties directly into the internal jugular vein.

The muscles of the tongue function together to permit a variety of shapes and functions to facilitate the production of speech and aid in the process of swallowing and manipulation of food before ingestion. The tongue must elevate posteriorly to push the bolus posteroinferiorly towards the hypopharynx and esophagus to swallow a food bolus efficiently.

There are a number of disorders of the tongue described in the literature. These include but are not limited to:

Ankyloglossia, informally known as “tongue-tie,” caused by an aberrantly short lingual frenulum, is a disorder that may manifest as difficulty with the articulation of words due to restricted manipulation of tongue movements. A surgical procedure to split the lingual frenulum is often undertaken, although many people are able to swallow and articulate normally with a short lingual frenulum. Additionally, in some areas, frenulotomy (also known as frenotomy or frenuloplasty) is performed with increasing frequency, particularly when first-time mothers have difficulty breastfeeding, despite inadequate trials of conservative treatment preoperatively.[9][10][11][12]

A non-malignant condition of the tongue known as migratory glossitis is an asymptomatic disorder in which the dorsum of the tongue produces red patches surrounded by a white peripheral border. This can occur due to general inflammation of the tongue and often results in loss of the lingual papillae on the surface of the tongue.[13]

A fissured tongue features small grooves on the dorsum of the tongue, which are non-tender; this condition has been linked with psoriasis and Melkersson-Rosenthal syndrome.[14]

Hypoglossal nerve stimulation is an alternative treatment for obstructive sleep apnoea (OSA). OSA often occurs due to a lack of tone of the tongue and pharynx within the airway and is frequently exacerbated by large tonsils, nasal obstruction, retrognathia, and adipose deposits in the neck.[15]

It has been postulated that the muscle fibers in the posterior part of the tongue have a higher fatigue tolerance compared to anterior fibers. This explains the ability of the posterior tongue to contract for long periods of time during sleep to prevent upper airway collapse.[15] Neurostimulation of the proximal hypoglossal nerve with the aim of increasing tone in the tongue is an increasingly performed procedure with a high likelihood of success in appropriately selected patients.[16][17][18]

Surgical resection of malignant lesions of the tongue is another major source of tongue muscular dysfunction. The majority of tongue cancers are located on the lateral aspects and the base, the resection of which can alter tongue structure and function. Moreover, the hypoglossal nerve can be damaged in such surgeries, resulting in a malfunction of the extrinsic muscles of the tongue, except for the palatoglossus muscle, which is innervated by the vagus (X) nerve.

In some cases, a small partial glossectomy may cause only limited, temporary tongue weakness, but hemiglossectomies or more extensive resections have a hugely significant impact on patients' quality of life due to reduced ability to speak and swallow. Reconstruction with free soft tissue transfer is often necessary, but while these techniques may provide bulk that improves swallowing and potentially articulation, preoperative function does not generally return after major surgery.

Intraoperatively and preoperatively, the styloglossus muscle can play an important role in characterizing the location of tumors, particularly squamous cell carcinomas, and therefore facilitate staging and accurate prognosis.[19] Invasion of the styloglossus muscle on magnetic resonance imaging has resulted in the up-staging of some tumors that were initially thought to be less aggressive.[20]

Resection of the styloglossus muscle during a transoral approach for squamous cell carcinoma of the lateral oropharynx exposes many vascular structures, and thus a transcervical approach may be preferable. The potential use of the styloglossus muscle in staging for squamous cell cancers of the lateral oropharynx has significant implications for surgical oncology of the head and neck, particularly with respect to conservation of speech and swallowing function.

The course of the styloglossus muscle connects the pharyngeal and submandibular spaces, forming the buccopharyngeal gap between the middle and superior constrictor muscles of the pharynx. This explains why a soft tissue infection of the submandibular space may spread to the pharyngeal space and surrounding structures. This spread may lead to extension into the adjacent retropharyngeal spaces; further spread into the thoracic cavity may result in mediastinitis, which is rare but has a high mortality rate.[1]

Ludwig’s angina, a potentially fatal spreading cellulitis of the submandibular, sublingual, and submental spaces, can cause significant swelling of the tongue and retropulsion of the tongue base, threatening the airway.[21] Direct spread of the infection to involve laryngeal structures, such as the epiglottis, can result in edema and airway compromise.

In many ways, the tongue is essential for quality of life and for participating in human society. Without a functional tongue, verbal speech is next to impossible and oral feeding is prohibitively difficult. As an extrinsic muscle, the styloglossus plays an integral role in tongue movement and may improve oral and pharyngeal cancer management. 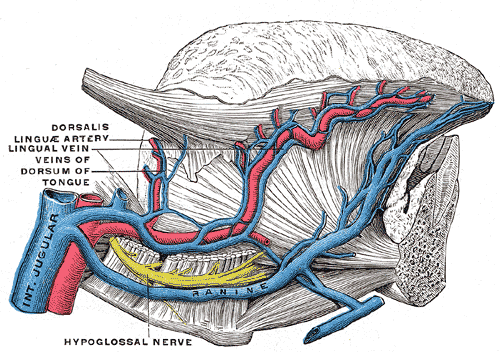 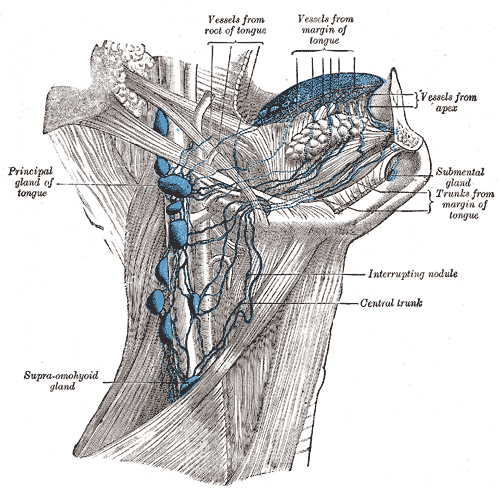 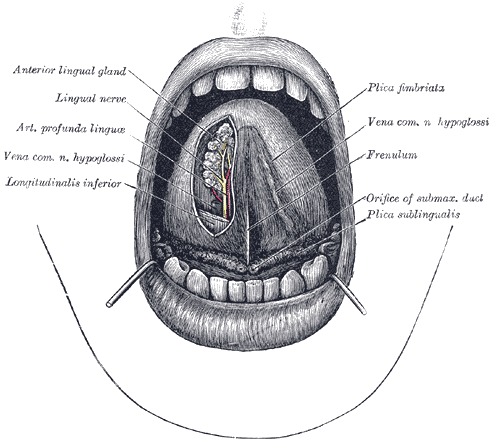 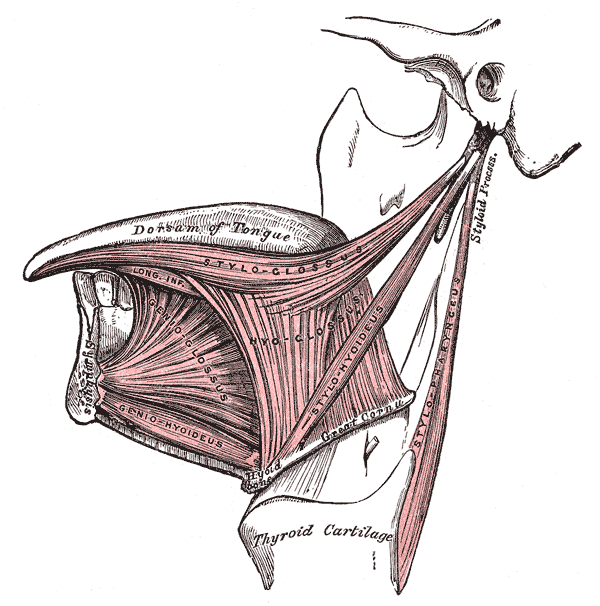 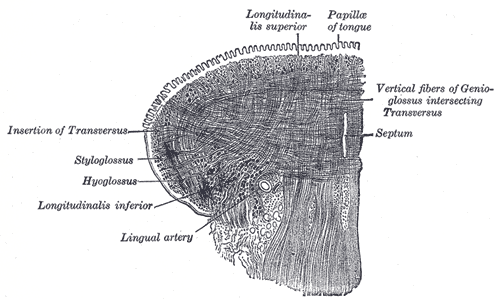 Sakamoto Y, Configuration of the extrinsic muscles of the tongue and their spatial interrelationships. Surgical and radiologic anatomy : SRA. 2017 May;     [PubMed PMID: 27830322]

Mudry A, From the stylet of the temple to the tongue in so-called Riolan's bouquet. European annals of otorhinolaryngology, head and neck diseases. 2020 Sep;     [PubMed PMID: 32192900]