Hemosuccus pancreaticus is a rare entity for gastrointestinal bleeding. It isn't easy to be diagnosed and is easily missed. Practitioners should recognize it promptly, and further evaluation is warranted when intermittent abdominal pain and melena occurred. This will lead to improved recognition of potential complications, which, in turn, will dictate treatment strategies and improve management by the interprofessional team.

Gastrointestinal bleeding (GI) is a common medical condition with high patient morbidity and mortality, which exerts a high burden on the medical care Systems. Many Pathologies might cause Gastrointestinal Bleeding, which can be categorized based on anatomical or pathophysiological factors. More frequent GI bleeding etiologies, including peptic ulcers, hemorrhoids, esophagitis, esophageal tears, esophageal varices, inflammatory bowel disease, polyps, diverticulitis, colon cancer, and many others. Other rare diseases such as hemosuccus pancreaticus (HP), hemobilia, aortoenteric fistula are also potential etiologies.[1]

Clinically, bleeding could be mild or severe, leading to hypovolemic shock and death. It is often difficult to be diagnosed at early stages due to the paucity of cases, anatomic location, and intermittent nature of bleeding. The unfamiliarity of HP to the physicians makes it a diagnostic challenge. It must be considered in patients with a history of chronic pancreatitis presenting with acute GI bleeding onset.[2][3]

Many potential causes behind HP and are:

HP is a rare entity of acute alimentary tract hemorrhage. Estimates to occur in about 1/1,500 GI bleeding cases have a strong male predilection (about 7:1). Because it is rare, it is missed easily. The mean age of onset is between 50-60 years old. It is highly correlated with alcohol exposure and other risk factors that are attributed to chronic pancreatitis development. No study or research shows any race or ethnicity superior to each other in terms of prevalence and incidence.[3]

A thorough history taking for potential risk factors should be obtained. The typical presentation of HP is recurrent bouts of acute pancreatitis in the form of abdominal pain radiate to the back concomitant with melena which is considered a pathognomonic feature for diagnosis. It classically presents as symptoms of intermittent Upper and/or lower GI bleeding, such as melena (dark, tarry stools) which is the most salient feature, hematochezia (bright color bleeding), hematemesis is less frequent and rarely presents as rupture into the abdominal cavity or/and retroperitoneum leading to a life-threatening condition. The bleeding is usually non-severe despite its arterial origin. Occasionally, HP presented acutely as a severe hemorrhage in the shape of severe hematemesis and hypovolemic shock.

Moreover, patients typically present with abdominal pain, mainly at the epigastric area or the uppermost part of the abdomen, which usually radiates posteriorly. The pain is not severe enough to make patients hemodynamically unstable. The pain usually has an "Up and down" pattern, which means it changes in intensity over time, that phenomenon attributed to the transient closure of pancreatic ducts. Patients with tumors of the pancreatic head might present with obstructive jaundice. Percentages of patients develop signs and symptoms of acute or chronic anemia. HP is highly correlated with heavy alcohol consumption.

Other clinical symptoms include vomiting, jaundice due to thrombus occluded the pancreaticobiliary reflux, and/or weight loss. A palpable pulsatile with a thrill murmur in case of an aneurysm could be noticed on physical examination.[3][8]

The diagnosis of HP is extremely challenging due to its infrequency, difficult anatomical site, intermittent course of bleeding, and several pathological causes behind it. Typically, Laboratory values are normal except for elevated serum bilirubin in pancreaticobiliary reflux and serum amylase and lipase if it is caused due to pancreatitis. The diagnosis is mainly through imaging modalities, as laboratory tests are generally normal and nonconclusive. Many diagnostic modalities that help in the diagnosis of HP include Esophagogastroduodenoscopy, contrast-enhanced CT, angiography, endoscopic ultrasound (EUS), and ERCP.

Regarding endoscopy, Once GI bleeding is noticed, it is imperative to perform an endoscopy to rule out common etiologies of GI bleeding such as peptic ulcer, erosive gastritis, varicose, and so on. Bleeding from the ampulla is not commonly detected as Hemorrhage usually has an intermittent and suboptimal view of the ampulla with a forward-viewing Endoscope due to the fiber-optic illumination in the design that pointed to the same direction. It can detect bleeding in about 30% of the cases. Due to this fact, a negative endoscope does not rule out the possibility of HP. However, a side-looking endoscope such as ERCP can help visualize and localize the pancreatic duct and the source of bleeding. The presence of Intraductal clots in the form of filling defects suggests a diagnosis of HP.

Abdominal ultrasound (US), whether doppler or dynamic, can both help to visualize the presence of an Aneurysm or pancreatic pseudocyst. The US has positive results in about 38% of the cases.

A contrast-enhanced CT scan is considered an excellent choice for demonstrating pancreatic pathologies such as chronic pancreatitis, pseudocysts, and pseudoaneurysms. Suggestive findings for HP on CT scan were detected as a sign of blood clots within the pancreatic duct. Other signs, CT scan also might show a constant opacification within the aneurysmal vessels, presence of pseudocyst, or/and persistent presence of the contrast after the arterial phase. These findings suggested an urgent angiography to be done for confirmation and therapeutic purposes. CT scan shows positive results in about 90% of the cases.

Angiography is the gold standard diagnostic and therapeutic method directed toward the celiac trunk, superior mesenteric artery, and tributaries. Angiography identifies the causative artery and allows for delineation of the arterial anatomy and therapeutic intervention. Usually, yield positive results in more than 90% of the cases.[7][9]

In GI bleeding patients, whether upper or lower, the first step is assessing the severity of the blood loss, resuscitation, and proper monitoring of the condition. The management for unstable HP is started with supportive therapy with oxygen therapy, 2 IV bore-needle with fluid administration, prepare for blood transfusion. The next step is to identify and localize the bleeding source with imaging modalities followed by definitive therapy. The main goal for management is to eradicate the bleeding source.[10]

For HP, many medications have been tested with no good results. Leaving the patient for only supportive therapy carries a 90% risk for mortality rate. The main two techniques include interventional radiology (IR) intervention or open surgery. The decision depends on the patients' clinical criteria and their presentation upon the time of diagnosis. Mostly done, and the primary tool is with an IR.[11]

It is often performed in hemodynamically stable patients considered the initial management line and usually done in HP diagnosed through angiography. IR has a success rate of about 67% to 100% of the cases. Techniques include angiography with embolization via prosthetic material, balloon tamponade, or stent placement. Coil embolization is the most commonly used method which induces thrombosis within the aneurysmal vessels. Nevertheless, it can induce ischemia within the vessel if it has a poor collateral supply. IR intervention has a recurrence rate of 30% of bleeding following the embolization. Balloon tamponade and stent placement can be put as a bridge to perform elective surgery. No major complication was noticed with IR interventions other than femoral artery cellulitis in about 0.5%.

Surgical interventions with laparotomy include distal pancreatectomy and/or splenectomy, central pancreatectomy, intracystic ligation of the blood vessel, aneurysm ligation, and bypass graft. They usually considered in patients with :

In cases of the pseudocyst's poor anatomical position and If the resection is unfeasible, it is recommended to ligate the artery proximal and distal to the bleeding source. Alternatively, through cutting the drainage to the pseudocyst that enters the GI tract. Intra-operative US and pancreatoscopy might need to determine the source of bleeding and the extent of resection. Surgery has a success rate of 70% to 80%, with a risk of 10% to 50% mortality and risk of recurrent bleeding to be 0% to 5%.[14]

Several novel therapies include the endoscopic-guided US with or without doing cystogastrostomy using fibrin glue and histoacryl adhesives. These approaches provide a promising tool for management. The recurrence rate of bleeding remained low after this effective treatment. This approach gives a promising outcome, particularly in patients who do not show angiographic evidence and are allergic to contrast contraindication. Those who are poor candidates for surgery. The benefits and the safety still need to be studied.

Differential diagnosis of the alimentary tract is broad and can be classified into many categories.

Upper GI bleeding include (esophagus, stomach, and part of the small intestine):[15]

Lower GI bleeding include (second part of the small intestine and the large intestine):

Overall, HP has a mortality rate of 9.6%. That rate increased in case of malignancy complicated with HP. If only supportive therapy administered, the mortality rate reached 90%.[7][16]

GI bleedings of any cause are of great concern and challenges. As it carries a high risk for mortality and morbidity. At Times, it is challenging to reach a definitive diagnosis.

A thorough repeated physical examination and history taking in addition to extensive blood workups such as Blood cell counts, blood type and cross match, bleeding diathesis, inflammatory markers, and cancer blood screening are necessary. As the diagnosis is broad, it is imperative to perform the precise invasive tests needed to determine the source of bleeding and administer the right interventions quickly.[19]

HP should be on the differential diagnosis list in patients with GI bleeding, especially in patients with chronic pancreatitis and heavy alcohol consumption. For HP, patients should be managed based on their presentation and the concomitant risk factors. Although Angiography and surgical interventions carry a risk for re-bleeding and morbidities, they are still the best options to intervene as diagnostic and therapeutic methods.

Patients with chronic Pancreatitis are consulted to avoid alcohol intake and cessation of smoking to minimize the risk of progression to a malignant condition as it carries 4% to 5% risk. Dietary advice, follow a low-fat diet, which is rich in protein and carbohydrates. Moreover, Strict adherence to fat-soluble vitamins and pancreatic enzyme supplements as directed. Also, annual screening for Diabetes Mellitus and a baseline DEXA scan for osteoporosis.[20][21]

The diagnosis and management of HP often require integrating multiple aspects of the clinical setting, involving various sub-specialties: primary care physicians, hospital medicine, interventional radiology, emergency medicine, gastroenterology, hepatology, general surgery, a specially trained nurse, and pharmacist. They included physicians must coordinate patient care to provide the best healthcare possible, improve their outcomes, and provide optimal patient results. Physicians should be familiarized with HP as managing a patient with HP requires a close watch on the patient for any progression in his symptoms to interfere in a perfect timely manner.

Reaching the prompt diagnosis of HP requires a high level of expertise which ultimately prevents prolonged suffering, frequent hospital admissions, and multiple blood transfusions. The choice of therapy depends on the clinical condition of the patient and the local availability and expertise of the gastroenterologist and the emergency medicine doctors in the area.[22][23]

Because of the paucity of HP, there is a lack of randomized clinical trials on the lines of management and the disease itself. The literature only shows case reports, case series, and retrospective cohorts. 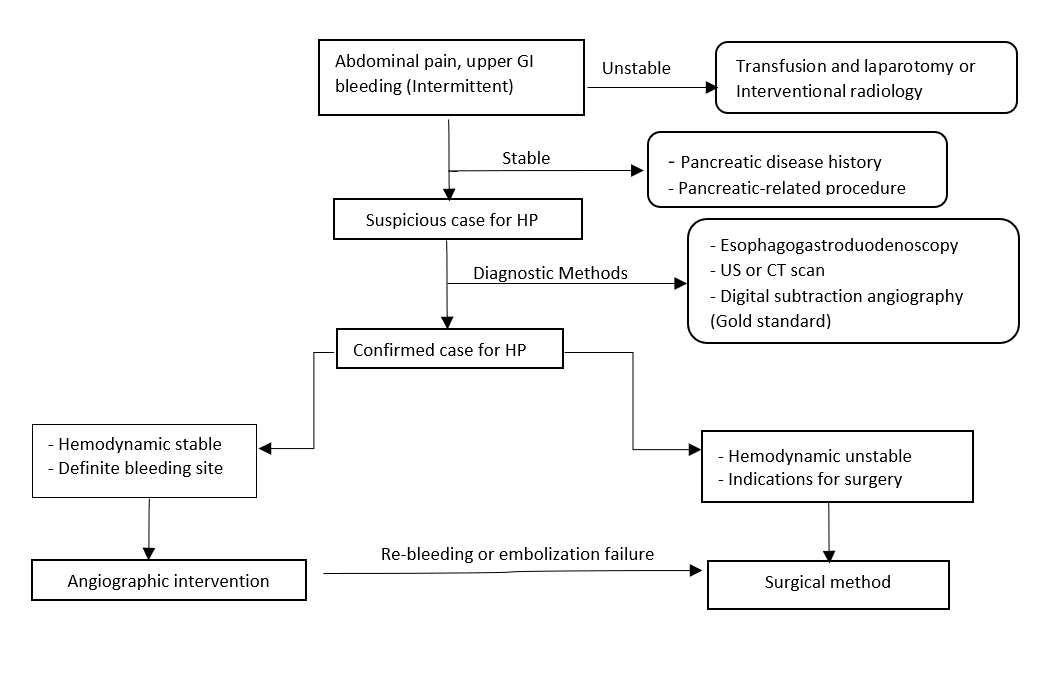 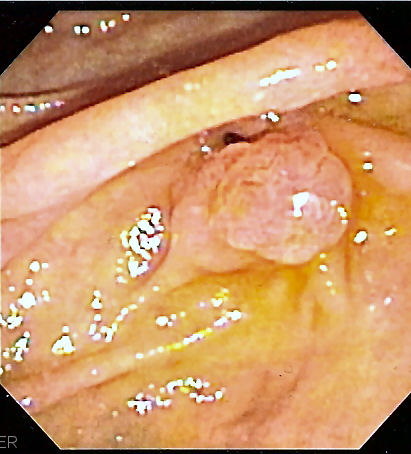 Endoscopic image of the ampulla of vater
Samir at the English-language Wikipedia, CC BY-SA 3.0 <http://creativecommons.org/licenses/by-sa/3.0/>, via Wikimedia Commons

Relationship between RNA content and progression of lymphocytes through S phase of cell cycle., Darzynkiewicz Z,Evenson D,Staiano-Coico L,Sharpless T,Melamed MR,, Proceedings of the National Academy of Sciences of the United States of America, 1979 Jan     [PubMed PMID: 33586690]

Identification of a non-H-2 gene (Rfv-3) influencing recovery from viremia and leukemia induced by Friend virus complex., Chesebro B,Wehrly K,, Proceedings of the National Academy of Sciences of the United States of America, 1979 Jan     [PubMed PMID: 22370249]