The mandible, which holds the lower teeth, comprises the majority of the lower third of the maxillofacial skeleton and is of utmost functional importance. Complex mandibular movements are afforded by the masseter, temporalis, medial pterygoid, lateral pterygoid muscles, and temporomandibular joints.[1] Given that the maxilla is stationary, mastication is dependent on mandibular movement. In certain populations, masticatory function related to dental status is a significant determinant of nutritional status. Being an edentulous geriatric patient without complete dentures was shown to be an independent risk factor for malnutrition.[2] This suggests the importance of functional occlusion.

Occlusion is the articulation between the mandibular and maxillary dental arch. Static and dynamic occlusal relationships can be described in many ways.[3][4] Understanding the occlusal contact relationship impacts the providers' ability to design and place dental implants, implement orthodontic braces, fit dentures, re-establish masticatory function, and restore a patient’s native bite after maxillofacial trauma.

The mandible consists of a body, rami, coronoid processes, and condylar processes. The mandible can be further subdivided into the angle where the ramus transitions to the body, the body, the parasymphysis located anterior to the mental foramen, and the midline symphysis. Mobility in the mandible allows for its participation in mastication and occlusion.[5] The muscles of mastication contribute to the mandible's complex movements and include the temporalis, masseter, medial pterygoid, and lateral pterygoid.[6] There are primarily 6 types of mandibular movement, including opening, closing, rightward jaw translation, leftward jaw translation, protrusion, and retrusion. Variability in jaw movement allows for mastication of different textures and consistencies.

Intricate movements within the temporomandibular joint translate to mandibular movements needed for mastication. To allow maximal mouth opening, the condyles move downward and forward over the articular eminence. The closing force begins with the condyle ipsilateral to the food bolus moving back into the mandibular fossa upwards and posteriorly to a position lateral from resting. Through closing, the ipsilateral condyle shifts medially while the contralateral condyle moves upward, posteriorly, and laterally.

The permanent, succedaneous teeth in adults consist of 16 teeth in the maxilla and 16 teeth in the mandible. The universal numbering system for permanent teeth assigns numbers to each tooth from 1 to 32. Tooth #1 is the right maxillary third molar followed sequentially by numbers 2-15 across the maxilla until reaching the left maxillary third molar, tooth #16. Numbering continues down to the mandible, with tooth #17 being the left mandibular third molar followed by 18-31 proceeding sequentially across the mandible until reaching the right mandibular third molar, which is tooth #32.[7][8] There are alternative numbering systems.

Adult dentition consists of 2 central incisors, 2 lateral incisors, 2 canines, 2 first premolars, 2-second premolars, 2 first molars, 2-second molars, and 2 third molars, both in the maxilla and mandible. The teeth are secured within the alveolar ridges of the maxilla and mandible. Dentition, whether native or restored, is integral to masticatory function.[9]

The following 5 surfaces of the crown of a tooth allow for discussion of occlusal contacts:[8]

Tooth cusps function to guide erupting teeth into appropriate occlusion with periodontal stimulation informing neural reflexes for jaw closure and mastication [1]. The maxillary palatal cusps and the mandibular facial cusps comprise the centric cusps involved in centric occlusion (discussed below). In contrast, the maxillary buccal cusp and the mandibular lingual cusps guide the mandible during the lateral excursion.

The sophisticated movements of the mandible impacting dynamic occlusal contacts are a combination of the 6 primary mandibular movements as well as the condylar movements discussed above. Posselt published his seminal work in the mandibular movement in 1952, including Posselt’s envelope of motion. This depicts the movement of the mandible in a sagittal plane. When the condyle is superior and anterior within the glenoid fossa, the mandible is maximally retruded. In this condyle position, the mandibular opening is referred to as centric relation, and this depends on the rolling (hinge) movement facilitated by the lower synovial cavity in the TMJ. Opening beyond this is dependent on the sliding (translational) movement of the upper synovial TMJ cavity. The first occlusal contact upon mandibular closing, when in centric relation, is referred to as centric occlusion. This is followed by the teeth sliding into the intercuspal position, where maximal intercuspal contacts are made in the occlusion. The Envelope of Motion's anterior arc illustrates mandibular movement into occlusion and opening when the mandible is maximally protruded.

The first branchial arch gives rise to Meckel's cartilage. On the lateral aspect of Meckel’s cartilage, the mandible starts as two halves, with each half developing an ossification center in the sixth to seventh week of intrauterine development. The ossification centers develop into what will eventually be the symphysis, body, angle, and ramus of the mandible. Separately, cartilage clusters form within the connective tissue, eventually ossify into coronoid and condylar processes.

The two ossified right and left halves of the mandible remain separated by connective tissue until closer to birth when small mental bone(s) (1 or 2) ossify. These mental bones ultimately fuse with the mandible creating a mental protuberance and the unified mandibular bone.[11]

Mesenchymal cells from the first branchial arch give rise to the muscles of mastication.[8]

Odontogenesis is the formation of teeth. The deciduous or baby teeth develop at 6 to 8 weeks gestation, whereas succedaneous teeth develop at 20 weeks. The ectoderm forms the dental enamel, while the ectomesenchyme (neural crest-derived) forms the dentin, cementum, periodontal ligament, and pulp. Placodes represent invaginations of primary dental lamina within the mandibular and maxillary arches beginning the process of tooth formation. Tooth buds form from the placodes, and the tooth buds develop into teeth.[11]

The maxillary artery, a branch of the external carotid artery, branches into the anterior, middle, and posterior superior alveolar arteries providing a blood supply to the maxillary dentition.[8]

The trigeminal nerve's maxillary division exits the skull base via the foramen rotundum, traverses the pterygopalatine fossa, enters the inferior orbital fissure, and ultimately gives rise to the inferior orbital nerve. This nerve is the origin of the anterior branch of the superior alveolar nerve providing sensation to the anterior hard palate, incisors, and canines. For the molars and posterior two-thirds of the palate, sensation comes from the greater palatine nerves arising from the maxillary nerve.[8]

The mandibular division of the trigeminal nerve exits the skull base via the foramen ovale. The anterior branch provides motor innervation to the muscles of mastication. The posterior branch provides sensory innervation via the long buccal nerve, inferior alveolar nerve (IAN), and the lingual nerve. The IAN provides sensory innervation for mandibular molars and premolars. A small branch of the IAN, the incisive nerve, branches just before the IAN exits the mental foramen becoming the mental nerve. The incisive nerve provides sensation to the mandibular canines and incisors.[8][11]

The muscles of mastication are also responsible for occlusion, given that they are the predominant mobilizers of the mandible.

The suprahyoid muscles contribute to mandible depression (jaw opening). These include the digastric, stylohyoid, mylohyoid, and geniohyoid muscles.[16]

Variation in static occlusion seen in the general population can be further described using various classifications. In 1899, Edward Angle introduced his classification of occlusion.[17] This system is based on normal occlusion being determined by the relationship between the maxillary and mandibular first molar as below.

Transverse and vertical relationships between maxillary and mandibular dentition can be described as well.

Overjet differs from overbite as overjet is the measure of how far anterior the maxillary dentition is in front of the mandibular dentition.[18]

Orthognathic surgery repositions the maxilla, the mandible, or both. There are numerous indications for orthognathic surgery, including obstructive sleep apnea, Angle’s class II occlusion, Angle class III occlusion, canting of the occlusal plane, aesthetic considerations, and an open bite, among others. A LeFort I osteotomy for the maxilla and bilateral sagittal split osteotomies for the mandible are the mainstays for modern orthognathic surgery. With both the maxilla and mandible manipulated, there is an opportunity to dramatically change a patient’s occlusion. For this reason, dental modeling is imperative to the process, whether done with traditional stone model surgery or virtual surgical planning.[19][20]

Maxillofacial trauma treatment, including mandibular and LeFort midface fractures, is founded upon pre-traumatic occlusion restoration. Some fracture patterns, particularly in the mandible, resulting in predictable malocclusions. For example, a condylar or subcondylar fracture reduces the vertical height of the mandible, causing premature contact of the ipsilateral posterior dental arch. An anterior open bite characterizes a bilateral condylar fracture because of these dimensional changes.[3]

Mobility of the mandible and/or the maxilla can create complex clinical situations in which occlusion can be altered adversely. Maxillomandibular fixation (MMF) is used intraoperatively to re-establish a patient’s occlusion. This can be achieved using Erich arch bars, inter-maxillary fixation screws, or rapid maxillomandibular fixation systems, among other techniques. With native occlusion secured using MMF, the midfacial fractures and/or mandibular fractures can be reduced and internally fixated.[16][21] In this way, the occlusion is the foundation of the repair.

Occlusal contact relations are between the maxillary and mandibular dental arches. The quality of these contacts allows for efficient mastication. Nutritional status is dependent on the dental status of a patient, as prior literature has shown.[2] Mastication is reliant on mandibular movements that can be complex, requiring coordination between temporomandibular joints and the muscles of mastication.

There are many ways to examine the quality of occlusion, and this is exemplified when considering dental implants or denture design. In maxillofacial trauma, occlusion can be altered from the trauma itself or suboptimal management of fractures. Keeping the dental occlusion as the foundation for these repairs prevents long-term malocclusion.[3] In other cases, malocclusion can be developmental and adversely impact cosmesis, which is the case for some patients seeking orthognathic surgery.[20] 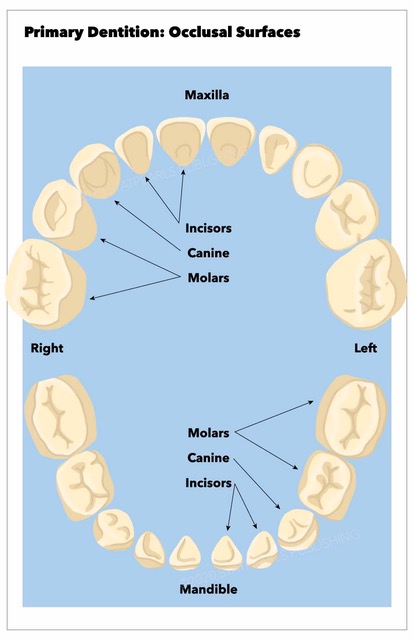 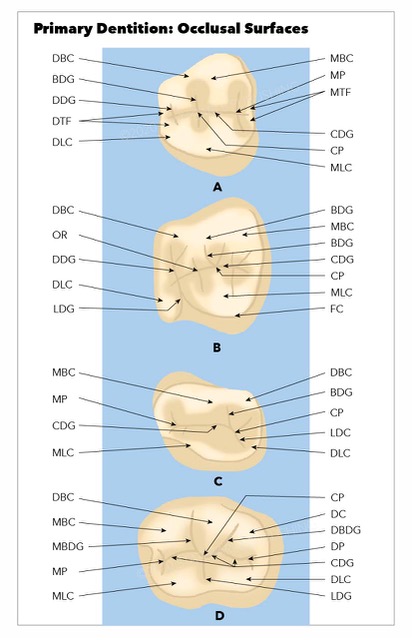 Bathla G,Hegde AN, The trigeminal nerve: an illustrated review of its imaging anatomy and pathology. Clinical radiology. 2013 Feb;     [PubMed PMID: 22889460]