Sonography can be used at different levels of gestational development to determine the age of the growing fetus.  Determining the correct age impacts later care of the woman and fetus, and may affect dates that determine the viability of the fetus, expected delivery date, and appropriate growth rate. The most accurate method to determine gestational age is during weeks 8 through 12 when the crown-rump length can be determined, and the fetus is in its greatest and most consistent rate of growth.[1][2]

Earlier and later developmental time periods may also remain useful in the appropriate clinical context to confirm dates.  Conveniently, portable ultrasound machines employed at the point of care may be as accurate as higher-end machines in determining gestational age.[3]

Appearing within the gestational sac, the yolk sac is a small, circular, hyperechoic ring that appears at about day 35, or between weeks 5 and 6, counted from the beginning of the last menstrual cycle. The yolk sac also grows at about 1 mm per day until about 9 weeks, when it begins to regress.[1] The yolk sac is less useful in determining gestational age.[2]

The embryonic pole first appears as a small linear structure congruent with the yolk sac giving the appearance of a “signet ring.”  This embryonic pole is the first structure that can be measured to obtain the crown-rump length and gives an accurate date to the gestational age. The embryonic pole will develop a cephalic and caudal portion that first appears wrapped or bent tightly to the embryo.  As these begin to unfold and the limbs appear, the first true crown-rump length measurements can be obtained. The differentiation between a fetus and embryo occurs at about 9 weeks when organogenesis has completed, and the developing fetus focuses on maturation and further development of existing structures.[1]

There are no known contraindications to utilizing sonography to assess gestational age. However, practitioners should ensure they use the least amount of ultrasonic energy possible over the briefest time possible to determine accurate information.

The pre-exam estimated age of gestation should guide bedside ultrasound probe selection.  A low-frequency curvilinear probe for a transabdominal method is nearly as accurate as an endovaginal exam after 6 weeks and is preferred for gestational ages greater than 8 weeks. An endocavitary probe is best utilized at an estimated gestational age of fewer than 12 weeks. As there is some overlap from 8 to 12 weeks in the ability of the probe to detect the appropriate structures, either probe may be used during this time period, and it may be necessary to utilize both probes to adequately visualize the gestational sac yolk sac and embryonic pole.  In this scenario, it is recommended to start with a curvilinear probe and transabdominal exam.  If the operator cannot visualize necessary structures, switch to the endocavitary probe and endovaginal exam.[2]

General and routine cleaning and maintenance of the probes should be done as per the manufacturer's recommended instructions for use. Images are best obtained with the patient in a supine position when using the curvilinear probe and in the lithotomy position when using the endovaginal approach with the endocavitary probe.  For a transabdominal exam, it is recommended that the patient have a full bladder or not have voided recently to use the urine-filled bladder as an echogenic window. A small amount of gel should be applied to the curvilinear probe, and the abdominopelvic region should be scanned in the longitudinal and short axes.

For a transvaginal exam, it is recommended that the patient empty her bladder just prior to the exam, as the cervix serves as an appropriate window with this approach, and a full bladder may displace uterine anatomy to the extent that detection and measurement of pregnancy may be difficult. The endocavitary probe is prepared by placing a small amount of ultrasound gel at the tip of the probe and placing a probe cover (which often has pre-placed ultrasound gel in place) over the endocavitary probe. Vaseline gel may then be placed over the cover before placement in the vaginal vault.

Images of the growing fetus within the uterus are obtainable in the transverse and sagittal planes from both the curvilinear and the endocavitary probes.  Once the gestation is identified and images are obtained, there are several methods to determine gestational age, utilizing the estimated age based on last-menstrual cycle dates or physical exam.

Gestational sac:  The gestational sac can first be seen at around 5 weeks on a transvaginal examination and 6 weeks on a transabdominal examination. It grows approximately 1 mm per day, and measurements become less accurate once it reaches a size of 14 mm.[2][6] The gestational age of the embryo is determined by measuring the mean diameter of the sac as measured from inside wall to inside wall of the sac.  If the gestational sac is not completely round, then it may be measured using three orthogonal distances from the inside of the sac using sagittal and transverse views.[1] The mean sac diameter is then either compared to a table of values, input into a regression model, or input into the ultrasound machine, determining the estimated age through pre-set calculators on an "Obstetric" setting.[7][8][9]

Crown-rump length: Of the first trimester methods, the crown-rump length is the most accurate for determining gestational age.[4] This is first measured at about 6 weeks when the embryo appears on the edge of the yolk sac as a linear hyperechoic structure. It is most accurate from 6 to 10 weeks during its most rapid and consistent growth rate. It can be measured up to about 14 weeks and is accurate within 3 to 8 days.[1][2] As the embryo develops, the measurement is taken from the outermost cephalad portion to the rump, excluding the limbs and yolk sac from the measurement. Most ultrasound machines will determine the age for the sonographer based on these measurements. If this is not an option, referencing published tables or regression models will provide this estimate.[8][10][9]

Changes in growth, genetic variations, and differences in attributes of the growing fetus make the determination of gestational age within the second and third trimesters less accurate.  Using multiple methods appears to be more accurate than using a single measurement. There are five methods commonly used during these stages of development.[4][11][12]

Biparietal Diameter:  This form of measurement is accurate to within 3 to 8 days in the first trimester and 7 to 12 days in the second and is influenced by different skull shapes.[2] Biparietal diameter is measured in an axial plane with the probe in a position that gives symmetric views of both hemispheres.  The image must contain the thalamus and cavum septi pellucidi. The ultrasound calipers should be placed on the outer edges of the skull wall that are closest to each other and on the inner skull wall on the edges farthest from each other.[2]

Abdominal circumference: In the second trimester, this measurement is accurate to about 7 to 15 days. It is obtained in an axial, transverse plane at the point the portal vein bifurcates and should include the stomach.[2] Due to growth variations, flexion of the fetus, and other positioning, its accuracy has wide variability.[2]

Femur length: In the second trimester, this measurement is accurate to about 7 to 17 days.[13] It is measured with the probe perpendicular to the length of the femur, and the length of bone, not including cartilage, is measured. Its length changes based on ethnicity and can be affected by different disease processes.[2]

Abdominal circumference and femur length are used in the third trimester to determine gestational age.[2][13] These measurements are obtained as described in the second trimester. During the third trimester, dating is less accurate, and repeat testing and follow-up should be done.

Abdominal Circumference: During the third trimester, the abdominal circumference is accurate to between 18 to 35 days and measured using the same method as in the second trimester.[2]

Femur length: During this trimester, the femur length is accurate to about 21 days and measured using the same method as in the second trimester.[2]

A meta-analysis from 2009 concluded that ultrasound during pregnancy is safe.[14] Some of the main complications appear to relate to the accuracy of the gestational age and the impact that may have on further care for the woman or her fetus.  It is also important to note that if an ectopic pregnancy is present, a pseudo-gestational sac may appear in the fundus of the uterus.  Measurement and misdiagnosis of this finding may mislead the healthcare team, leading to severe consequences associated with a missed ectopic pregnancy.

Obtaining the correct gestational age may have several implications in the care of the fetus.[15] This includes determining the viability of the fetus and whether certain life-saving measures should be employed. Estimated delivery dates will also determine later approaches to delivery, such as whether a c-section should be performed or induction of labor based on the earlier gestational dates obtained.  Growth rate and size determinations will also depend on correct dating.

Since gestational age is best determined in the first trimester, and particularly around week 7 of gestational age, these measurements must be documented for other providers and healthcare workers on the interprofessional team for use in the further care of the patient as the pregnancy progresses, to achieve optimal outcomes for both mother and child. [Level 5]

Point-of-care ultrasound is often utilized for this determination, and an ideal method of sharing the sonographer's finding is a transmission of the images to the patient's medical record as well as a procedure note with a detailed report of the findings. Any finding while measuring a gestational sac that that might be concerning for a pseudo-gestational sac requires further investigation to ensure an ectopic pregnancy is not present as this can be life-threatening. Interprofessional healthcare team members need to communicate and coordinate activities to ensure proper follow-up or emergent consultation if there is a concern for an ectopic pregnancy. 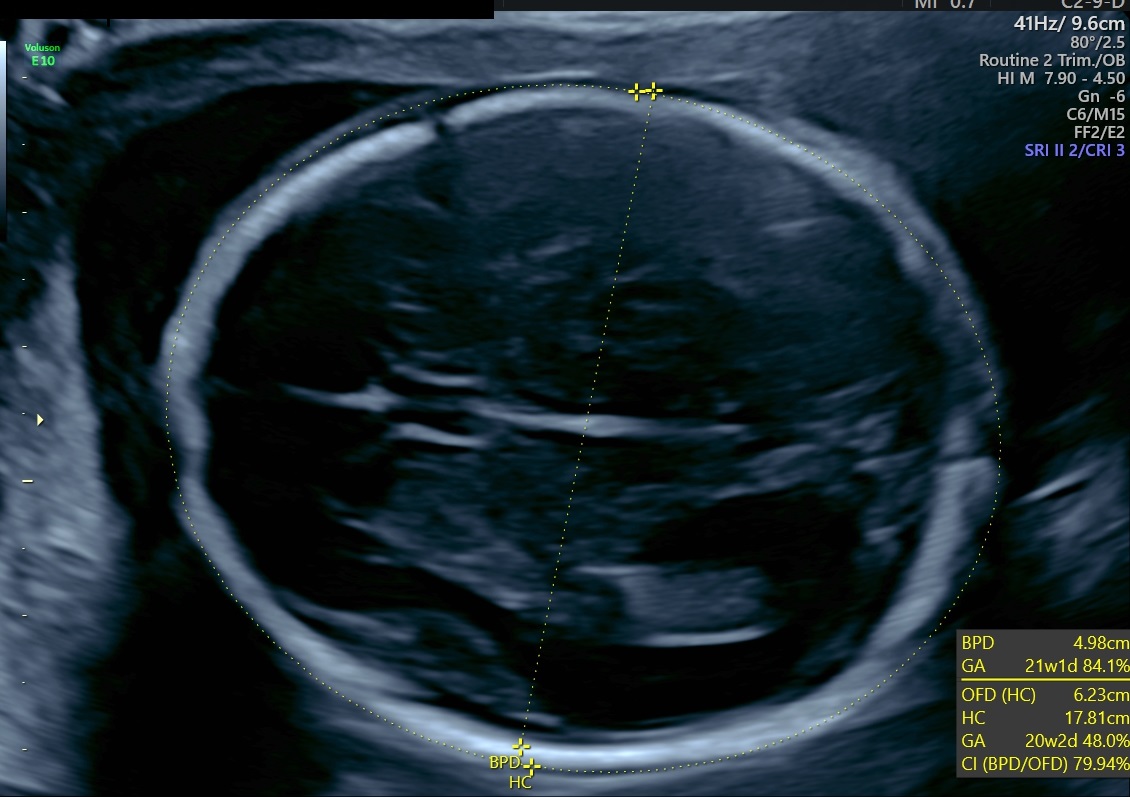 This ultrasound image demonstrates a fetal biparietal diameter and a head circumference in the second trimester with an estimated gestational age of 21 weeks 1 day and 20 weeks 2 days, respectively.
Contributed by Carl Skinner, MD 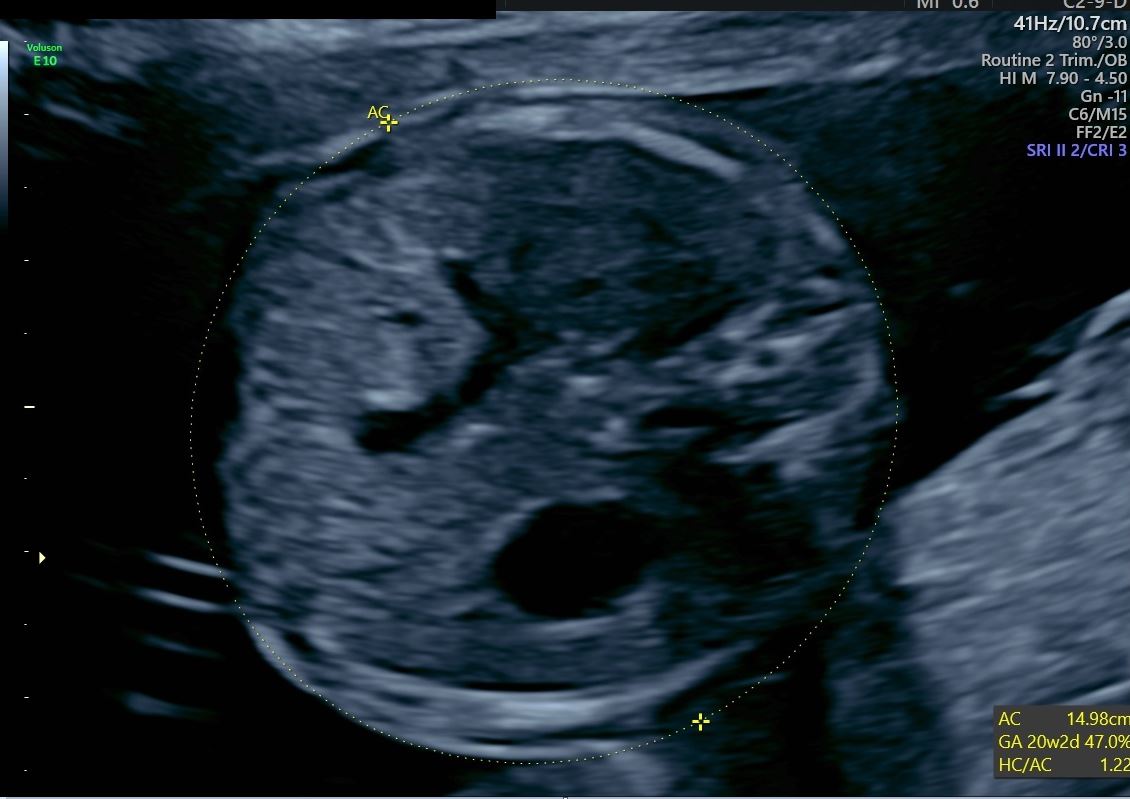 An ultrasound image demonstrating a fetal abdominal circumference with an estimated gestational age of 20 weeks and 2 days.
Contributed by Carl Skinner, MD 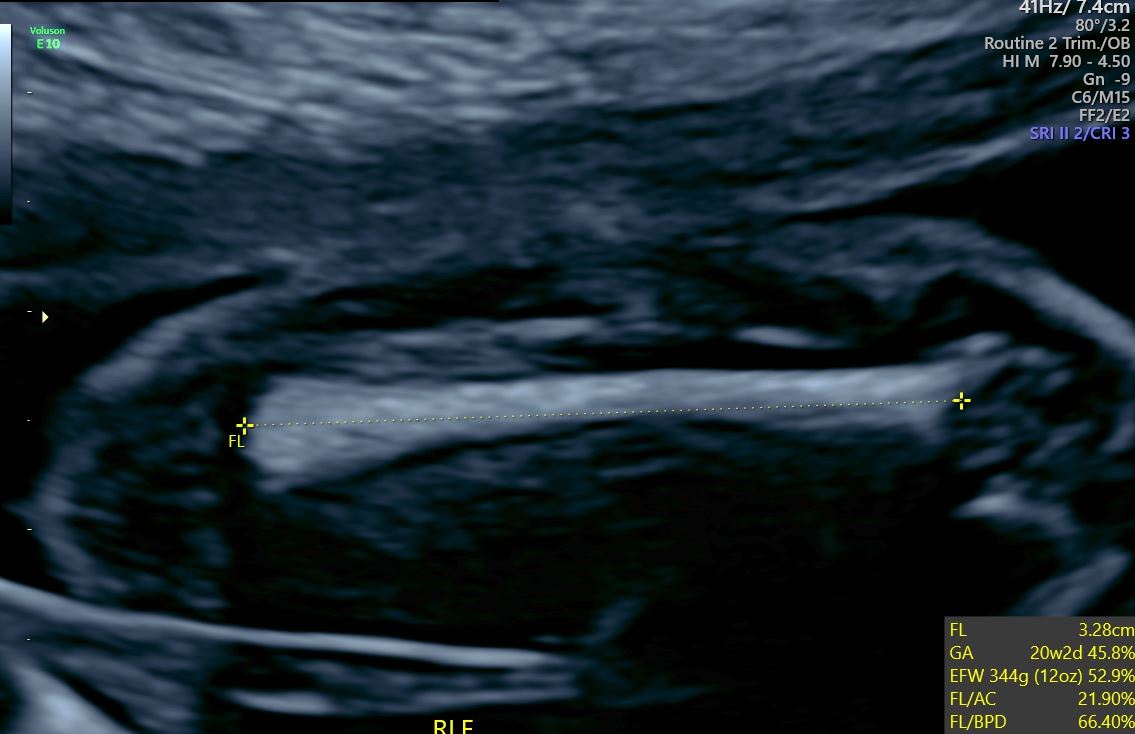 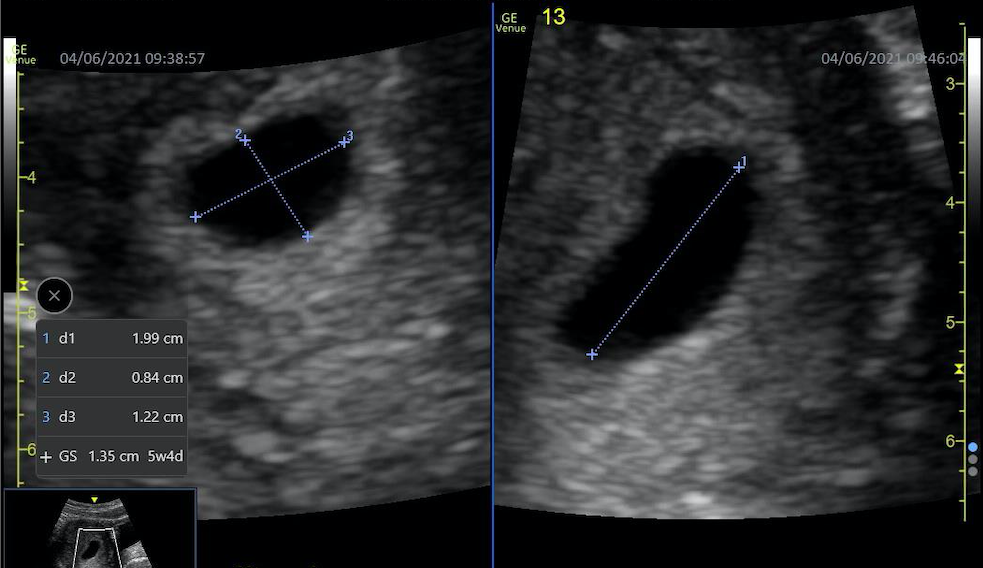 Measurement of this gestational sac in more than one plane helps to determine the gestational age in this ultrasound image.
Contributed by Cristin Mount, MD 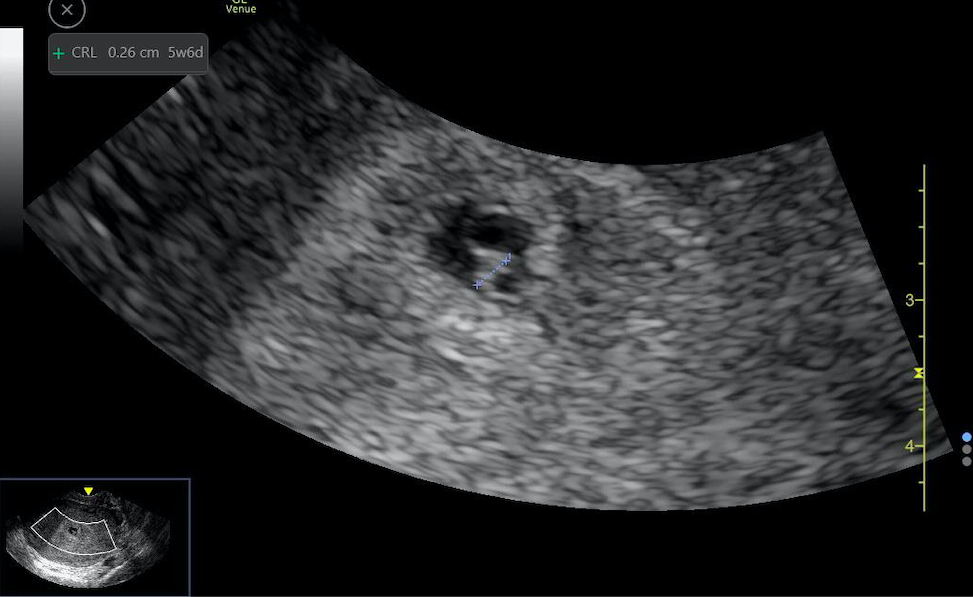 Crown rump length measurement taken along the length of the embryo. The circular yolk sac can be seen adjacent to the fetal pole in this ultrasound image.
Contributed by Carl Skinner, MD