Ocular dermal melanosis, also known as nevus of Ota or oculodermal melanocyte, is benign melanosis that involves the distribution of the trigeminal nerve, mainly the ophthalmic and the maxillary divisions with associated hyperpigmentation of the eye and its adnexa. It occurs most commonly unilaterally. There is an increased risk of uveal melanoma and glaucoma in these cases. This activity reviews the evaluation and clinical diagnosis of nevus of Ota and highlights the role of the interprofessional team in evaluating and treating patients with this condition.

The characteristic gray-blue hyperpigmentation occurs due to entrapped melanocytes. Unilateral presentation is more common. The melanocytes are entrapped leading to gray-blue hyperpigmentation of the conjunctiva and sclera along with ipsilateral facial skin. There is an increased risk of uveal melanoma and glaucoma in these cases.[3] Palatal involvement may also occur.[4]

Nevus of Ito is very similar to nevus of Ota except it differs in the territory of distribution. It was described by Minor Ota in 1954. It involves the distribution territory of lateral cutaneous brachial nerves of the shoulder and posterior supraclavicular nerves. Both of these diseases share similar pathophysiology.

The exact etiology is unknown, and various hypotheses have been proposed:

The Asian population is more commonly involved affecting 0.014% to 0.034% of the population. Most commonly, they present at birth, but lesions can also appear in puberty or during pregnancy due to hormonal changes. Females are more commonly affected than males at a ratio of 5:1.[6] It is more common in people of Asian and African descent and less common in Whites.[7] Though the risk of malignant melanoma is much more in Whites than in other races.

Nevus of Ito also presents during infancy or at the time of puberty. Asian populations and dark skin races are affected more commonly. Nevus of Ota is also sometimes found to be associated with nevus of Ito.[8]

Nevus of Ota is usually asymptomatic though rare cases with sensory loss have also been reported. It is characterized by bluish hyperpigmentation along the ophthalmic and maxillary divisions (V1 and V2) of the trigeminal nerve. The nevus of Ota is usually unilateral or sometimes bilateral. Morphology can be macular (rarely papular or nodular), patchy brown, slate-blue or with grey-black pigmentation, and deeper lesions appearing blue. Macules are confluent, non-hairy, and flat with poorly defined margins. Pigmentation may affect extracutaneous sites like the eyes (conjunctiva, sclera, cornea, and uvea). Pigmentation may also affect the oral cavity and nasal mucosa.

The only difference between the nevus of Ota and the nevus of Ito is the site of involvement and distribution. Ocular complications are not seen in the nevus of Ito. The intensity of pigmentation in both of these nevi may vary with menstruation, fatigue, or weather. Pigmentation becomes more intense after puberty and remains permanent with no spontaneous regression.

There is no definitive diagnostic test to confirm the nevus of Ota and Ito. They are diagnosed mainly by clinical examination and history. Dermatoscopy shows bluish to slate grey homogeneous pigmentation. Skin biopsy is mandated if the overlying skin develops ulceration, or there is a variation in pigmentation with the development of papules.

Superficial variants tend to occur on the cheeks, while deeper variants affect periorbital areas, the temple, and the forehead. Periodic re-evaluation with an ophthalmologist should also be performed annually to rule out ocular complications.

Ophthalmological screening and recording of vision, intraocular pressures, gonioscopy, comprehensive slit-lamp examination, and dilated fundus examination should be done to rule out any uveal melanomas. Management of uveal melanomas will depend on the size and location and will involve surgical resection, radiotherapy, transpupillary thermotherapy, or enucleation.[9]

Treatment is required for cosmetic purposes or if there is any malignant transformation. Treatment depends on the size of the lesion and the extent of invasion. Mohs micrographic surgery can be employed to remove the lesions and reconstruct the periocular tissues. For more extensive lesions or metastasis, a combination of surgical excision along with radiotherapy, transpupillary thermotherapy, or chemotherapy may be tried.

Lasers can be employed for the cosmetic treatment of skin lesions by destroying the melanocytes. Pulsed Q-switched laser surgery is the treatment of choice for nevi of Ota and Ito. It targets dermal melanocytes and melanophages by their selective photothermal and photos mechanical destruction, thereby decreasing the pigmentation. Chemical peels, dermabrasion, electrocautery, or cryotherapy are other modalities of treatment for cosmesis.[11]

Diagnosis of nevus of Ota and Ito can be made based on its clinical morphology and sites of involvement.[12] Dermatosis that need to be considered in the differential diagnosis are:

Malignant degeneration is rare. The prognosis is good. Patients usually present for cosmetic reasons due to pigmentation of the sclera and iris. Rarely it may be associated with cavernous hemangioma of the optic disc.

There is a 10.3% risk of glaucoma, and 1 in 400 patients developed malignant melanoma. For these reasons, annual ophthalmological screening is mandated for the measurement of intraocular pressures and dilated indirect ophthalmoscopy.

A skin biopsy should be done if clinical changes are suspected of malignant transformation. Ophthalmologic follow-up care is necessary for patients with increased intraocular pressure.

Overall, these lesions are typically benign with an excellent prognosis with or without treatment. Yearly screening for ruling out glaucoma and malignant melanoma by an ophthalmologist and dermatologist is recommended.

The main social impact of nevi of Ota and Ito is the cosmetic concern. In nevus of Ota, where the sclera is commonly affected, ocular complications like increased intraocular pressure and glaucoma can occur. Malignant melanoma has also been reported, which occurs mainly on the skin, but meninges and ocular areas can also be involved.

Patients should be taught that nevus of Ota and Ito are benign lesions that may present as ipsilateral grayish-blue pigmentation along the periocular region. The patient should be advised that transformation to malignancy is rare. The patients are counseled to seek immediate medical consultation if there is any change in the size and shape of the lesions. Instruct patients to schedule periodic follow-up visits with an ophthalmologist for the measurement of intraocular pressures.

Nevus of Ota commonly presents initially to ophthalmologists or dermatologists as a cosmetic concern for the bluish discoloration of periocular skin and the sclera. It is primarily a clinical diagnosis, but there is an increased risk of glaucoma and uveal melanoma in these cases (10% and 1 in 400, respectively). It is important to have baseline measurements of the intraocular pressures, perform gonioscopy, and indirect ophthalmoscopy on the first visit. Serial monitoring of intraocular pressures is mandated to detect early glaucoma. Close interprofessional team coordination with ophthalmologists, dermatologists, and primary clinicians is indicated for the management of these patients. 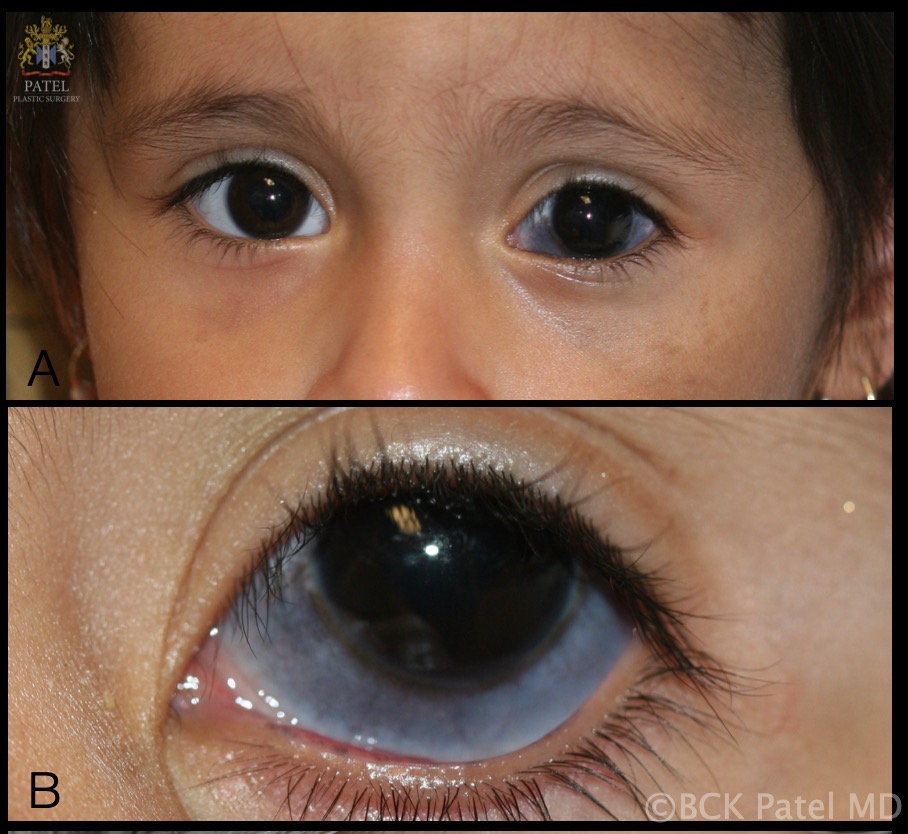 Nevus of Ota in a 3-year-old female: pigmentation of the eyelid skin and sclera
Contributed by Professor Bhupendra C. K. Patel MD, FRCS 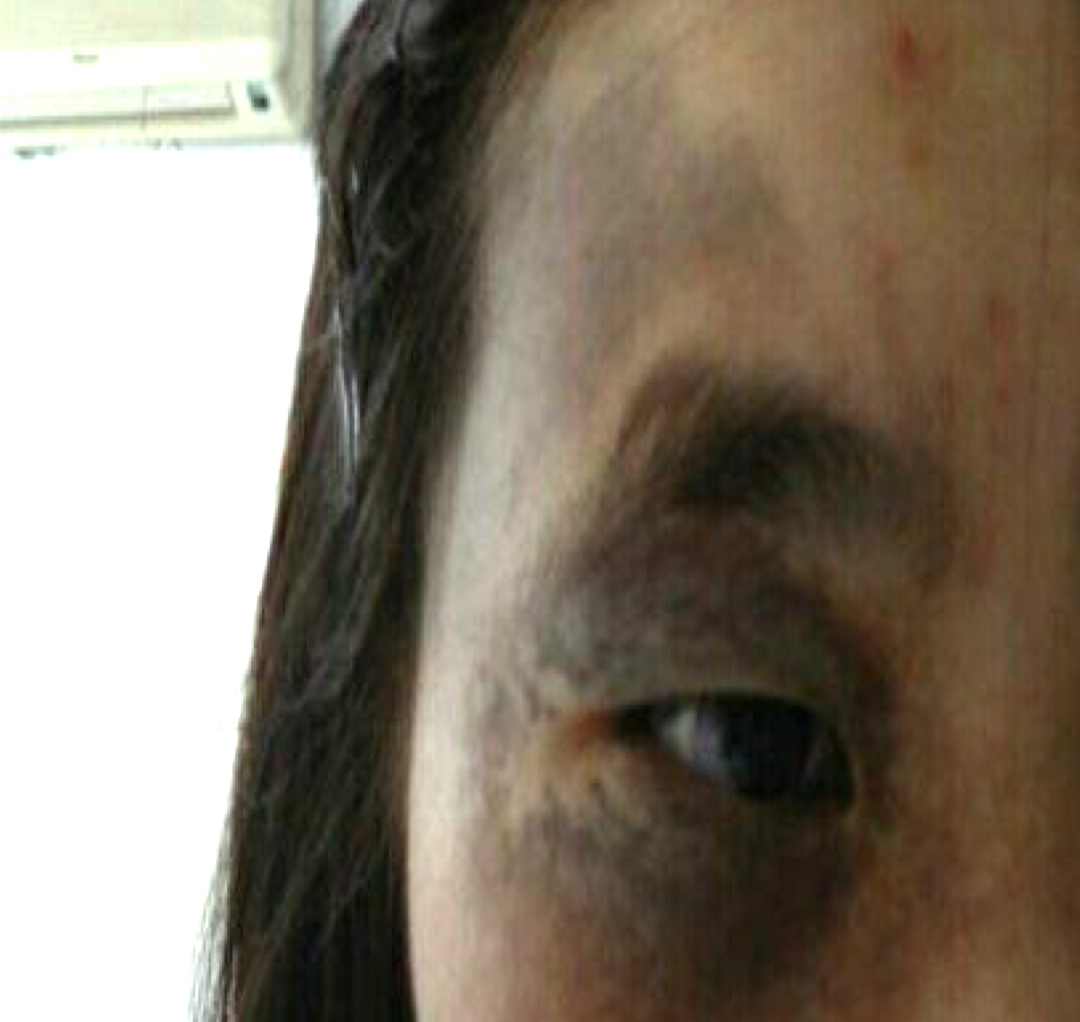 Nevus of Ota in an adult: involvement of the V1 and V2 distribution of the trigeminal nerve and the sclera
Contributed by Professor Bhupendra C. K. Patel MD, FRCS

Patel BC,Egan CA,Lucius RW,Gerwels JW,Mamalis N,Anderson RL, Cutaneous malignant melanoma and oculodermal melanocytosis (nevus of Ota): report of a case and review of the literature. Journal of the American Academy of Dermatology. 1998 May     [PubMed PMID: 9591805]