Duodenal ulcers are part of a broader disease state categorized as peptic ulcer disease. Peptic ulcer disease refers to the clinical presentation and disease state that occurs when there is a disruption in the mucosal surface at the level of the stomach or first part of the small intestine, the duodenum. Anatomically, both the gastric and duodenal surfaces contain a defense system that includes pre-epithelial, epithelial, and subepithelial elements. Ulceration occurs from damage to the mucosal surface that extends beyond the superficial layer. While the majority of duodenal ulcers present with dyspepsia as the primary associated symptom, the presentation can range in levels of severity, including gastrointestinal bleeding, gastric outlet obstruction, perforation, or fistula development. The management, therefore, is highly dependent on the patient's presentation at the time of diagnosis or progression of the disease.  The diagnosis of duodenal vs. gastric ulcer merits consideration in patients with symptoms of dyspepsia/upper abdominal pain who also report a history of NSAID use or previous Helicobacter pylori diagnosis. Any patient who has been diagnosed with peptic ulcer disease and, most specifically, duodenal ulcer should undergo testing for H. pylori as this has been found to be a common cause.

The two primary causes for duodenal ulcers are a history of recurrent or heavy NSAID use and a diagnosis of H. pylori.[1] The majority of patients carry a secondary diagnosis of H. pylori; however, as infection rates have declined, other previously uncommon etiologies are becoming more prevalent. Other causes of duodenal ulcers include etiologies that, in similar ways to NSAIDs and H. pylori, disrupt the lining of the duodenum. Some of these include Zollinger-Ellison syndrome, malignancy, vascular insufficiency, and history of chemotherapy.

According to multiple studies that have evaluated the prevalence of duodenal ulcers, they are estimated to occur in about 5 to 15% of the Western population.[2] Previously, the recurrence and prevalence rates were extremely high due to a lack of identification and effective treatment of H. pylori. Most recently, a systematic review of seven studies discovered the rates to be significantly lower. However, the variability was thought to be due to the prevalence of H. pylori in the population studied as well as the guidelines for diagnosis utilized, including endoscopic guidelines. In areas with a higher incidence of H. pylori, however, the rates were noted to be the highest, which in turn supports the previously established notion that H. pylori infection presents significant comorbidity for the development of duodenal ulcers.[3] The overall decline in rates of diagnosis of duodenal ulcers is also attributable to developing physician and patient awareness regarding the use of NSAIDs and potential complications that can be associated with misuse as well as the slowly declining rates of smoking amongst younger individuals as research has also been found this to be another confounding comorbidity.

The presentation of patients with symptoms consistent with dyspepsia or peptic ulcer disease, and most specifically, duodenal ulcers, can vary highly depending on the degree of disease progression and time when a patient seeks treatment. Most patients with peptic ulcer disease, up to 70%, are asymptomatic. Overall, dyspepsia is the most common symptom for patients who do experience symptoms. As noted above, the degree of disease progression before the initial diagnosis can affect the symptoms with which a patient may present. The location of the disease can also be differentiated based on symptoms.[7] The pain associated with duodenal ulcers improves after meals, while the pain associated with gastric ulcers generally intensifies after meals. Other common signs and symptoms include epigastric abdominal pain, bloating, nausea and vomiting, and weight gain (due to improved symptoms post meals).

Patients who initially present with ulcer-related complications may present with symptoms suggestive of upper GI bleed, which may include melena, hematemesis, elevated BUN, anemia of varying degrees in severity with associated fatigue. Patients who present with more alarming symptoms such as anemia, melena, or hematemesis, which may represent perforation or bleeding, will likely require more invasive forms of evaluation. The history and age of the patient should also be taken into consideration when considering duodenal ulcers as part of the differential diagnosis, especially when patients present with more non-specific symptoms such as epigastric abdominal pain. Duodenal ulcers may occur in any age group. However, they are most commonly diagnosed in patients aged 20 to 45 and are more common in men than women. Most patients will have a history of presenting symptoms consistent with peptic ulcer disease (PUD) associated with a previous diagnosis of H. pylori and/or heavy NSAID use. Other elements of the history to consider include smoking history, daily aspirin use, and history of GI malignancy. On physical examination, patients may have epigastric abdominal tenderness, and if presenting with complications, they may demonstrate signs of anemia such as pale skin and positive fecal occult blood test.

Once the diagnosis of H. pylori based on a history of presenting illness and physical exam findings is a possibility, studies are necessary to establish a definite diagnosis and underlying etiology further. In simple terms, the diagnosis of peptic ulcer disease in general and, more specifically, duodenal ulcers can be made directly by the visualization of the ulcer on upper endoscopy. The evaluation process will depend on what studies the patient may have had completed for the previous assessment of their symptoms. Patients who may have had radiographic imaging completed, which showed evidence of ulceration, but do not have any alarm symptoms suspicious for ulceration/perforation or obstructive pattern, may be treated without the need of endoscopy for visualization of ulcers.

Computed tomography performed for the evaluation of abdominal pain can identify non-perforated peptic ulcers. However, the majority of patients will need a referral for esophagogastroduodenoscopy (EGD) for further evaluation. Duodenal ulcers occur most frequently in the first portion of the duodenum (over 95%), with approximately 90% located within 3 cm of the pylorus and are usually less than or equal to 1 cm in diameter. Barium endoscopy is an option for patients with contraindications to EGD. Once the diagnosis of peptic ulcer disease has been made, it is vital to establish the etiology of the disease as this will help develop a treatment plan for the patient, not only acutely but also a long-term plan to help prevent a recurrence.

Given the high correlation of H. pylori coinfection in the setting of duodenal ulcers, individuals evaluated for H. pylori will need further testing for a formal diagnosis.[8] Biopsy of the tissue during EGD can assist with diagnosis. However, other non-invasive tests may be completed to rule out H. pylori as part of the cause. If the patient has undergone EGD, biopsies can be obtained and further tested with a urease test and histology. Less invasive options include a urea breath test, stool antigen test, and serological tests. Serology is less common, as this can remain positive if the patient has been previously infected and does not necessarily represent active infection. The urea breath test has high specificity. However, false-negative results can occur in the setting of PPI use. Stool antigen testing can be used to establish a diagnosis and prove eradication, as it represents ongoing infection.

The treatment plan of duodenal ulcers is developed initially based on the degree of disease noted at diagnosis. Patients who present with complications, including perforation or bleeding, may require surgical intervention. However, the majority of patients are treated with antisecretory agents to help reduce the amount of acid exposure to the ulcerated region and, in turn, provide symptomatic relief and promote healing. For patients who present with a history of heavy NSAID use, the first step is to advise patients to avoid NSAID use as this is not only a possible etiology but also a cause of worsening symptoms. Smoking and alcohol cessation is also encouraged, as these may also exacerbate symptoms.

Antisecretory agents include H2 receptor antagonists as well as proton pump inhibitors. The duration of therapy varies highly depending on the presenting symptoms, level of compliance suspected, and the risk of recurrence. The majority of patients, however, do not require long-term antisecretory therapy following H. pylori treatment, upon confirmation of eradication and if they remain asymptomatic. Patients diagnosed with H. pylori must receive triple therapy (two antibiotics and a PPI), and elimination must be confirmed.[9] A meta-analysis of 24 randomized trials helped show that eradication of H. pylori was associated with significantly lower rates of both gastric and duodenal ulcers. Patients with complications at the time of presentation will need to follow their general surgeon's postoperative recommendations. They will likely require treatment for more extended periods (8 to 12 weeks) or until confirmed ulcer resolution by repeat endoscopy. Patients may require laparoscopic repair for perforated ulcers or bleeding ulcers that are not responsive to endoscopic intervention from a surgical standpoint.

Early detection and intervention for patients diagnosed with duodenal ulcers are vital for the prevention of complications. The first intervening physician must obtain a thorough history, including details regarding a patient's symptoms and medication use history. For patients who present with more advanced disease, an interprofessional approach to diagnosis and management is critical as surgeons, nurses with specialty gastroenterology training, GI specialists, internal medicine providers, and pharmacists will be involved in providing care and adequate follow-up in a multi-professional healthcare team setting. [Level 5] The diagnostic burden will fall to clinicians (MDs, DOs, mid-level practitioners), including gastroenterology specialists. Nurses can offer counsel on disease management and verify therapy regimen compliance; they are often the first contact point for patients and may be the first to observe therapeutic failure or adverse events. Pharmacists will always perform medication reconciliation, dose, and frequency verification and report back to the prescriber or nursing with any concerns. Pharmacists can also offer medication administration counsel to the patient, reinforcing what the prescriber and nursing have already told the patient. All these activities need to occur collaboratively and not in silos. Everyone on the healthcare team has access to the same level of information and can contribute from their expertise to positive outcomes.

Education for patients treated for ulcers should include the primary causes associated with ulcers, practices to avoid such as NSAID use, and the risk of interventions offered. Individuals should also be advised regarding long-term use of PPIs if this is the therapy of choice for symptomatic management.

In younger patients who have duodenal ulcers that are distal to the duodenal bulb, always check a fasting gastrin level to evaluate for a hyper-gastrin state, such as gastrinoma. In older patients with the same finding, consider CT angiography, especially of the celiac trunk and superior mesenteric artery, to assess chronic ischemia. 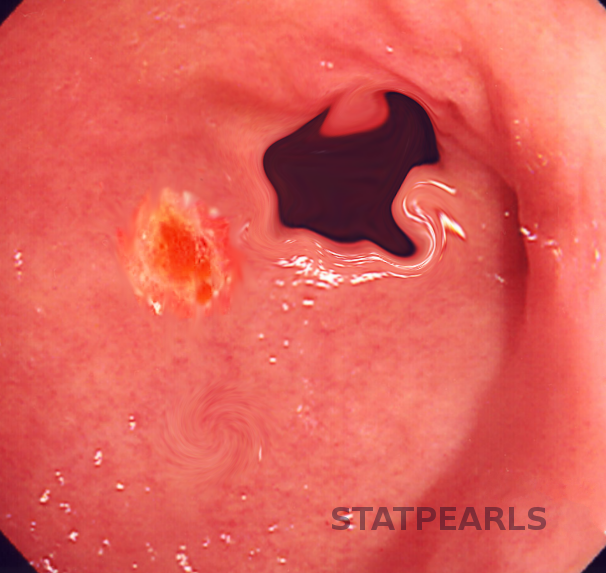 Chey WD,Wong BC, American College of Gastroenterology guideline on the management of Helicobacter pylori infection. The American journal of gastroenterology. 2007 Aug;     [PubMed PMID: 17608775]