Dementia is a general term that refers to a decline in cognitive ability severe enough to interfere with activities of daily living. Alzheimer disease (AD) is the most common type of dementia, accounting for at least two-thirds of cases of dementia in people age 65 and older. Alzheimer disease is a neurodegenerative disease that causes progressive and disabling impairment of cognitive functions including memory, comprehension, language, attention, reasoning, and judgment. It is the sixth leading cause of death in the United States. Alzheimer disease is typically a disease of old age. Onset before 65 years of age (early onset) is unusual and seen in less than 10% of Alzheimer disease patients. The most common presenting symptom is selective short-term memory loss. The disease is invariably progressive, eventually leading to severe cognitive decline. There is no cure for Alzheimer disease, although there are treatments available that may improve some symptoms.

Symptoms of Alzheimer disease depend on the stage of the disease. Alzheimer disease is classified into preclinical, mild, moderate, and late-stage depending on the degree of cognitive impairment. The initial presenting symptom is usually recent memory loss with relative sparing of long-term memory and can be elicited in most patients even when not the presenting symptom. Short-term memory impairment is followed by impairment in problem-solving, judgment, executive functioning, lack of motivation and disorganization, leading to problems with multitasking and abstract thinking. In the early stages, impairment in executive functioning may be subtle. This is followed by language disorder and impairment of visuospatial skills. Neuropsychiatric symptoms like apathy, social withdrawal, disinhibition, agitation, psychosis, and wandering are also common in mid to late stages. Difficulty performing learned motor tasks (dyspraxia), olfactory dysfunction, sleep disturbances, extrapyramidal motor signs like dystonia, akathisia, and parkinsonian symptoms occur late in the disease. This is followed by primitive reflexes, incontinence, and total dependence on caregivers.[1],[2],[3]

A good history and physical examination are the keys to diagnosis. It is also essential to take a history from the family and caregivers as some patients may lack insight into their disease. It is vital to characterize onset and early symptoms to differentiate from other types of dementia. It is important to obtain a good assessment of functional abilities like basic and individual activities of daily living.

Brief standard examinations like the mini-mental status examination are less sensitive and specific, although they can be used for screening.

All follow-up visits should include a full mental status examination to evaluate disease progression and development of neuropsychiatric symptoms.

Brain imaging may help in the diagnosis and monitor clinical course of the disease. MRI or CT brain can help exclude other causes of dementia like stroke or tumors. Dilated lateral ventricles and widened cortical sulci, especially in the temporal area are typical for Alzheimer disease.

EEG typically shows a generalized slowing with no focal features.

Functional brain imaging techniques like PET, fMRI, and SPECT are being used to map patterns of dysfunction in smaller brain areas of the medial temporal lobe. These studies may be helpful in early detection and monitoring clinical course; however, their role in the diagnosis of Alzheimer disease is not fully established yet.

Most recently, there have been developments in brain imaging techniques to detect core histological features of Alzheimer disease, that is amyloid plaques and neurofibrillary tangles. The utility of these techniques is still being investigated.

It is important to understand that diagnosing the type of dementia with all certainty may not be entirely possible despite excellent clinical history, physical examination and relevant testing. Some patients will complain of cognitive impairment that can be verified objectively, but is not severe enough to impair activities of daily life and thus does not meet criteria for dementia, and is usually just classified as mild cognitive impairment. However, a significant proportion of people with mild cognitive impairment will develop dementia of some type in 5 to 7 years.

There is no cure for Alzheimer disease. Only symptomatic treatment is available.[10][11][12]

Cholinesterase inhibitors act by increasing the level of acetylcholine; a chemical used by nerve cells to communicate with each other and is important for learning, memory and cognitive functions. Of this category, 3 drugs: donepezil, rivastigmine, and galantamine are FDA-approved for treatment of Alzheimer disease.

Donepezil can be used in all stages of Alzheimer disease. Galantamine and rivastigmine are approved for treatment in mild to moderate Alzheimer disease only. Donepezil and galantamine are rapid, reversible inhibitors of acetylcholinesterase. Rivastigmine is a slow, reversible inhibitor of acetylcholinesterase and butyrylcholinesterase. Donepezil is usually preferred of all because of once-daily dosing. Galantamine is available as a twice daily tablet or as a once-daily extended-release capsule. It cannot be used in end-stage renal disease or severe liver dysfunction. Rivastigmine is available in an oral and transdermal formulation. Most common side effects of cholinesterase inhibitors are gastrointestinal-like nausea, vomiting, and diarrhea. Sleep disturbances are more common with donepezil. Due to increased vagal tone, bradycardia, cardiac conduction defects, and syncope can occur, and these medications are contraindicated in patients with severe cardiac conduction abnormalities.

Partial N-Methyl D-aspartate (NMDA) antagonist memantine blocks NMDA receptors and slows intracellular calcium accumulation. It is approved by FDA for treating moderate to severe Alzheimer disease. Dizziness, body aches, headache, and constipation are common side effects. It can be taken in combination with cholinesterase inhibitors.[13]

It is also important to treat anxiety, depression, and psychosis, which is often found in mid to late stages of Alzheimer disease.

The expected benefits of treatment are modest. Treatment should be stopped or modified if no significant benefits or if intolerable side effects.

Regular aerobic exercise has been shown to slow the progression of Alzheimer disease.

Alzheimer disease (AD) is a progressive neurodegenerative disorder marked by behavior and cognitive impairment that eventually interfere with daily functional living activities. The disorder has no cure, and its rate of progression is variable. Further, the diagnosis of Alzheimer disease in the early phase is difficult, and there are no specific laboratory or imaging tests to confirm the diagnosis. The drugs available to treat the condition only work for the mild disease but also have numerous side effects which are not well tolerated. Alzheimer disease is a systemic disorder and creates havoc in the family. These individuals often wander, fall, have significant behavior problems and loss of memory. The majority of patients end up in an institution because they become unmanageable at home. Because of the nature of the disease, an interprofessional approach to the disorder has been recommended. Many guidelines and recommendations have been made on how to approach, monitor and treat Alzheimer patients. No one measure can prevent or arrest the disease. Given this, the following health care workers have a critical role in ensuring that the patient with Alzheimer disease remains safe and lead a decent quality of life.

Physical therapy for exercise. There is now ample evidence that exercise can help reduce the progression of the disease.[14] (Level III)

Nurses to educate the patient and family on medications, lifestyle changes, and performing daily living activities. To educate the partner on self-reporting on the worsening of symptoms.

Pharmacist to ensure that polypharmacy does not occur and that the patient is not developing adverse effects.

Alzheimer disease is initially associated only with impaired memory, but with time, the individual may develop severe cognitive and behavioral symptoms like depression, anxiety, anger, irritability, insomnia, and paranoia. As the disease progresses most of them will require assistance with daily living activities. Eventually, even walking become difficult and many may not be able to eat or develop swallowing difficulties that lead to aspiration pneumonia.

The time from diagnosis to death is variable; some individuals may die within five years, and others may remain alive for ten years, but overall the quality of life is very poor. While an interprofessional approach to management of Alzheimer patients is recommended, an analysis of several studies reveals that this approach has no impact on the care of his patients. However, because of the heterogeneity in the previous studies, more robust studies will be required to determine what type of approach works best for managing these patients.[15]

Educate the family and caregiver about the support systems 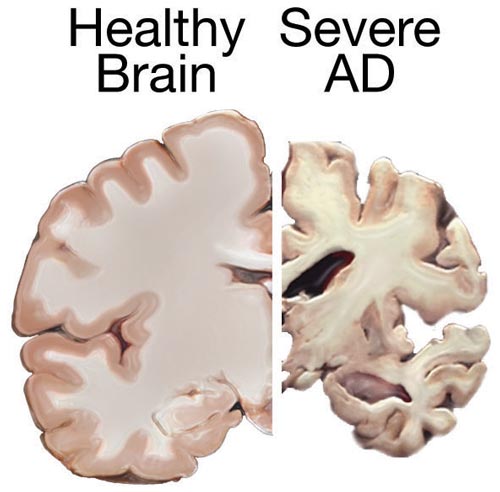