Nasopharyngeal carcinoma (NPC), previously known as lymphoepithelioma, is a malignancy arising from the epithelium of the nasopharynx. Endemic to China, the malignancy shows a variable rate of occurrence ranging from high incidence in the Southern part of China to a low rate in the White population and Northern China. This activity describes in detail the incidence, epidemiology, clinical manifestations, evaluation, and treatment of nasopharyngeal cancer and highlights the role of the interprofessional team healthcare team in improving care for patients with this condition.

Nasopharyngeal carcinoma (NPC), previously known as lymphoepithelioma, is a malignancy arising from the epithelium of the nasopharynx. Endemic to China, the malignancy shows a variable rate of occurrence ranging from high incidence in the Southern part of China to a low rate in the White population and Northern China with an incidence ranging from 15 to 50 per 100,000. A complex interplay of genetic susceptibility and Epstein Barr virus (EBV) infection is responsible for the disease.[1]

An interplay of environmental factors, genetic structure, and EBV infection is involved in the etiology of the disease. Environmental factors, including smoking in the western population and nitrosamines containing food agents, have been considered to have an involvement. Secondly, the genetic structure of the demographics involved also plays a vital role, as explained by the overwhelming incidence in the Chinese population. Lastly, EBV infection, coupled with genetic susceptibility, has shown a substantial relevance to the disease.[2][3]

Nasopharyngeal carcinoma (NPC) is highly endemic to Southern China, Malay, and Indonesian population along with people from Southeast Asia. The rate varies from a minuscule value of less than 1 per 100,000 individuals in non-endemic areas to a high value of 25 to 30 and 15 to 20 males and females per 100,000 individuals in endemic areas, respectively.[4]

The development of nasopharyngeal carcinoma depends on multiple factors, such as genetic susceptibility, environmental factors, and infections such as Epstein-Barr virus (EPV) infection. Many studies linked multiple genes to the pathogenesis of the NPC; one of these genes is a region in human leukocyte antigen (HLA) genes at chromosome 6. Other genes have been identified in different locations on different chromosomes such as 13q12, 3q26, 5p15, 6p21, and 9p21.[5] Other than the host genes, EBV is highly associated with NPC. Many studies illustrate multiple processes and mechanisms that EBV can activate or inhibit in the host cell while transforming it into a cancer cell. EBV affects the cells by bringing its encoded-proteins or RNA molecules that affect host cells, and these molecules could be summarized but not restricted to:

Histopathological evaluation can elucidate in which category does the tumor fall. On histopathological grounds, Nasopharyngeal carcinoma can be categorized into three main sub-groups as per WHO classification:

Patients can have variable presentations depending on the area of involvement of the disease.

Symptoms associated with distant spread are rarely presented to the primary care provider. The most significant spread includes the liver and lungs. It is sometimes difficult to assess the primary site of malignancy when metastatic pulmonary lesions are observed. PET scan aids in the differentiation of the two. Secondly, a handful of cases present with symptoms of dermatomyositis. A 10-year retrospective review has shown an association of NPC in patients with dermatomyositis.[10]

The mainstay of treatment for nasopharyngeal carcinoma is radiotherapy in locoregional lesions as the non-keratinizing variety is highly radiosensitive. Surgical intervention is limited to salvage procedures in recurrent diseases, whereas chemotherapy is preferred concomitantly with radiation in advance stages.

Radiation is the management of choice for the locoregional lesion. Radiotherapy is effective in all cases except those for distant metastasis hence from stage I to stage IVA. NPC shows a tendency for quick spread regionally, especially as the nasopharynx is a small cavity so spread to paranasopharyngeal spaces, musculature, and nodes common. Also, progressively involving the contralateral side is not a rare occurrence. Consequently, a dose of approximately 65 Gy for primary tumor with 50 to 55 Gy is also necessary for nodal negative necks.

A recent innovation in the delivery system employed for radiation is intensity modulation or intensity-modulated radiotherapy (IMRT). The system is equipped with a CT taking slices of the area involved. The physician specifies the targeted area of the beam and modulates the intensity of the beam employed.[12]

Radiotherapy is also employed when treatment failure or recurrence is seen. It has been proven useful in both local recurrence and nodal failures. In such cases, brachytherapy is considered keeping in mind the friability of the local tissue, the general condition of the patient, and the impact on vital organs of the region.[3][11]

NPC is highly chemo and radiosensitive. In advanced locoregional disease, concomitant chemoradiotherapy is the mainstay of management. The disease responds better with induction, and concurrent therapy is significant in shrinking the tumor bulk. The commonest agent used as the initial line of chemotherapeutic intervention is cisplatin. The standard of care is a dose of 100 mg every third week.

Chemotherapy is also the option of choice when distant metastasis is involved. NPC with distant poly-metastasis is offered palliative chemotherapy. The agents of choice are cisplatin and 5-fluorouracil. With recent advances, there are a number of chemotherapeutic agents that are available for the continuation of therapy. However, the median survival rate is not more than a year.[3][11]

Surgical intervention is employed only as a salvage option. The nasopharynx is a small and deep area that is hard to access, thus making the surgical approach difficult and may be inappropriate. However, when the locally recurring disease is encountered, patients should be given the option of surgical intervention. Surgery is also one of the key modes of management for distant oligo-metastasis in conjunction with radiotherapy and radio ablation.[13][14]

Nasopharyngectomies are carried out by a number of approaches, and the approach decided should be tailored in accordance with the expertise of the surgeon and the general condition of the patient. The following are some of the popular approaches to the cavity.

Differential diagnosis of nasopharyngeal carcinoma is based on regional lesions involving the nasopharynx and mimicking the symptomatology. Categorization can be made on the nature of the lesion in the following manner:

The nuances in imaging techniques and the improved outcomes associated with optimum therapy have caused the American Joint Committee on Cancer (AJCC) to reevaluate the staging process. This tumor is stagged according to the Union for International Cancer Control (UICC), and the American Joint Committee on Cancer (AJCC) tumor, node, metastasis (TNM) system. The 7th edition of the UICC/JNCC staging system was replaced by the 8th edition (last update) in 2016. As per the last update of classification, the TNM staging has been explained as the following criteria (Table 1 summarize the staging groups, Table 2 summarize the UICC/AJCC 8th edition staging of NPC):[5]

T: which refers to the local size or extent of the tumor

Staging groups: The 8th edition of AJCC update in groups involve the fourth group only, previous IVA and IVB groups were merged together in the new IVA group, and subsequently, the old IVC group was upgraded to be the new IVB as the following:

The overall prognosis and the 5-year survival rate has definitely improved since the advent of nuances in the radiotherapy techniques. This has drastically decreased the mortality and morbidity associated with illness from a reported 5-year survival of 20% to 40% to approximately 70% in the past decade.[15]

However, the predicting value for prognosis in the classic anatomical staging system is not sufficient nor accurate. Adding the EBV DNA status of the patient to the new (8th edition) makes this system more accurate for the estimation of the prognosis. In addition, other studies show other efficient biomarkers for assessing the prognosis of this tumor, such as miRNA and DNA methylation.[5]

Lesions can have local complications, including obstruction of Eustachian tubes causing otitis media with effusion (OME), persistent nasal obstruction, and obstruction of an oropharyngeal airway. Mass effect causing blockage of oropharynx impedes swallowing, and if it remains unchecked, its progression may lead to blockage of the airway. Intracranial extension and involvement of cranial nerves are debilitating and can have a lifelong disability even after management.[16]

Patients endemic to prevalent areas should be more vigilant regarding the symptoms of the disease. Moreover, the demographics of the western population having environmental factors (smoking, etc.) associated with NPC should also be educated regarding their hazardous effects. Also, the subset of people having genetic susceptibility along with recurrent EBV infection should have a higher index of suspicion for the disease.

Endemic areas have made strides in this regard as they have increased their index of suspicion towards such malignancies at the primary care physician level. After diagnosis, a radiotherapist and oncologist should educate the patient regarding the favorable outcome associated with strict adherence with the program. Prolong therapy has complications of itself that can be managed in follow-up clinics. Also, patients having the psychological burden, benefit from structured support groups and psychologist sessions. 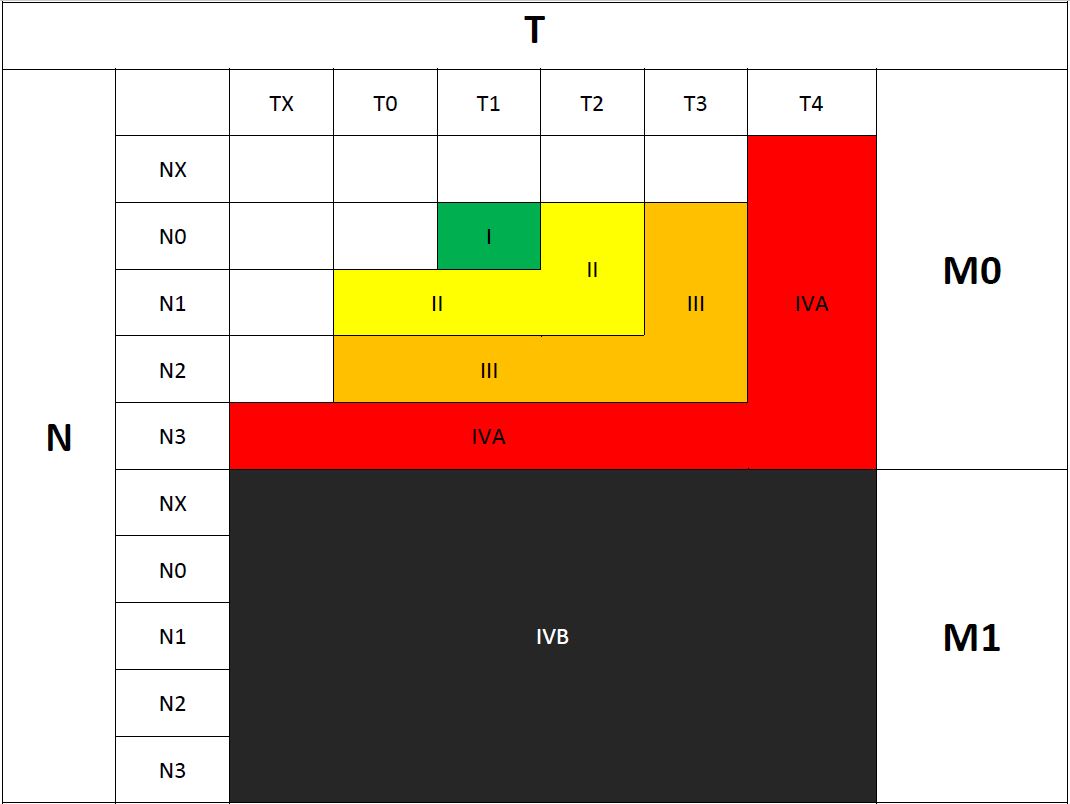 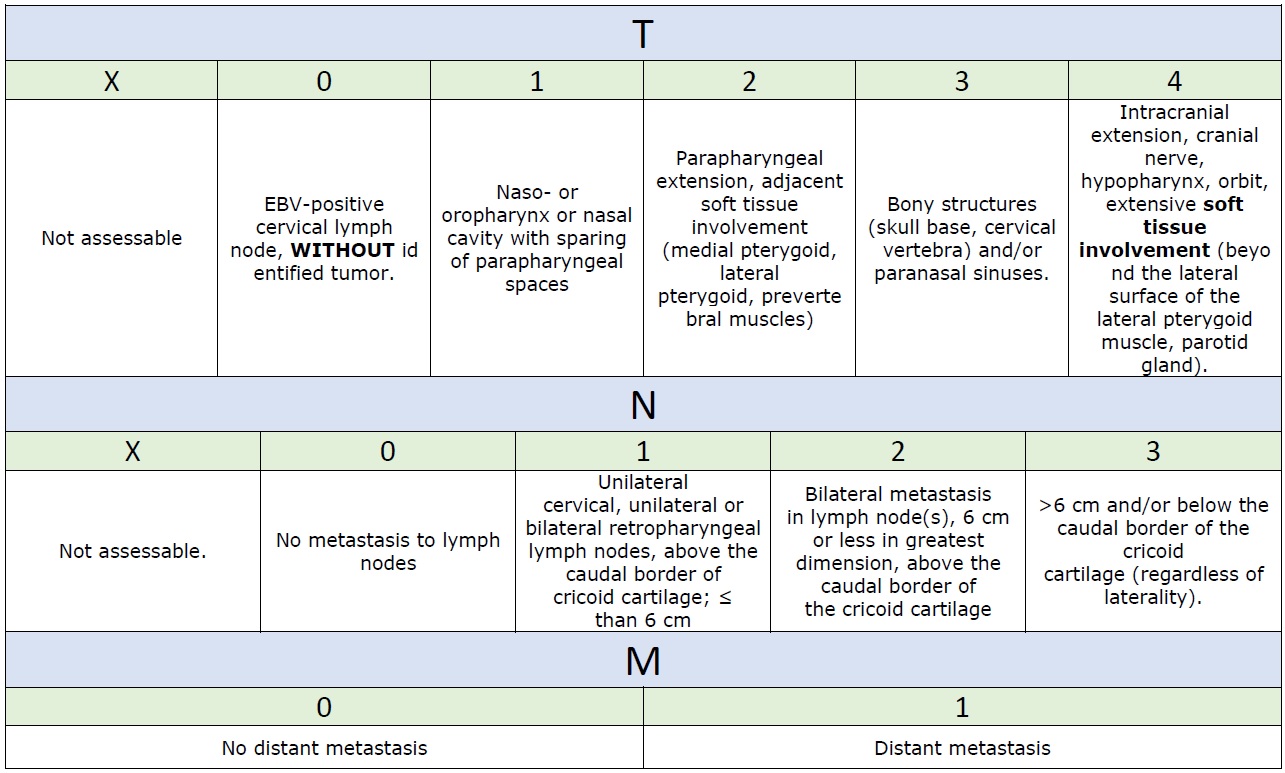 Du T,Xiao J,Qiu Z,Wu K, The effectiveness of intensity-modulated radiation therapy versus 2D-RT for the treatment of nasopharyngeal carcinoma: A systematic review and meta-analysis. PloS one. 2019;     [PubMed PMID: 31291379]