The somatic nervous system is a component of the peripheral nervous system associated with the voluntary control of the body movements via the use of skeletal muscles. It is responsible for all the functions we are aware of and can consciously influence, including the movement of our arms legs and other parts of our body. A substantial portion of the peripheral nervous system is the 43 different segments of nerves- 12 pairs of cranial and 31 pairs of spinal nerves, which help us perform daily functions. The somatic nervous system consists of both afferent (sensory) and efferent (motor) nerves [1]. It is also responsible for the reflex arc, which involves the use of interneurons to perform reflexive actions. Besides these, there are thousands of other association nerves in the body.

Cranial nerves are responsible for carrying information in and out of the brain. Ten of the cranial nerves originate from the brain stem and mainly control the voluntary movement and structures of the head with some exceptions. The nucleus of the olfactory and optic nerve are located in the forebrain and thalamus, respectively, and are not considered true cranial nerves. The others originating from the brainstem include oculomotor, trochlear, trigeminal, abducens, facial, vestibulocochlear, glossopharyngeal, vagus, spinal accessory, and hypoglossal. Of note, the accessory nerve innervates the sternocleidomastoid and trapezius muscles, neither of which control muscles used exclusively in the head.

The somatic nervous system contains both afferent nerves traveling from the periphery towards the CNS and efferent nerves that are responsible for sending signals from the CNS to the periphery. The brain and spinal cord are responsible for processing and integrating the various sources of information to allow us to develop a response. Therefore the main function of the somatic nervous system is to connect the CNS with organs and striated muscle to perform our daily functions. The basic motor pathway involves the upper motor neurons located in the precentral gyrus (primary motor cortex), which sends signals through the corticospinal tract via axons in the spinal cord to the lower motor neurons. These signals travel through the ventral horn of the spinal cord and synapse with the lower motor neurons and send their signals through peripheral axons to the NMJ of skeletal muscle. UMN release neurotransmitters acetylcholine, which binds to nicotinic acetylcholine receptors of the alpha-motor neurons creating a stimulus that propagates towards the NMJ, which innervates muscles.

The peripheral(outside of the CNS) processes of the somatic nervous system form the somatic peripheral nerves, which are structurally and functionally different from the autonomic nervous system. The somatic peripheral nervous system is a single neuron system with the motor neurons lying inside the brainstem or spinal cord and the sensory neurons lying in the dorsal root ganglia. The autonomic peripheral nervous system is a two neuron system with a neuron lying outside of the CNS in the autonomic ganglia. The nerve fibers have different sizes with different conduction velocities. The size depends on the actual size of the axons and, more importantly, the degree of myelination, which provides electrical insulation and fast conduction seed through the so-called "saltatory conduction." The fastest conducting fibers are, therefore, the most heavily myelinated. They are the motor fibers from the motor neurons and sensory fibers serving discriminative touch, joint position, and vibratory sensations. The small fibers are mainly sensory fibers serving pain and temperature sensations.

These are neural pathways that are responsible for the automatic response between a sensory and motor neuron. The sensory input generates a specific motor output. The simplest spinal reflex is mediated by a single synaptic process called the monosynaptic reflex. It contains only one synapse between the two neurons involved in the arc (sensory and motor). An example to illustrate this is the patellar reflex- Striking the patellar ligament just below the patella with a reflex hammer leads to automatic contraction of the quadriceps, this results in knee extension. The next order of a simple reflex involves two or more synapses termed the polysynaptic reflex (one or more interneurons). For example, the sensory neuron becomes stimulated, which activates the interneuron, which then directly stimulates the motor neuron, causing a movement.

The motor nerves originate from the ventral neural tube. Ventrilization is induced by morphogenetic molecules like the sonic hedgehog, and other growth factors as well as myelinating proteins.[2][1] On the other hand, the sensory nerves derive from a specific population of cells in the roof of the neural tube called neural crest cells.[1] The neural crest cells are divided axially into cranial, vagal, truncal, and lumbosacral. These truncal cells are responsible for forming the dorsal root ganglia, the autonomic ganglia, and the paraganglia, which include the neurons of the adrenals.[3]

Dorsal root ganglion (DRG) targeted delivery of drugs is a targeted tool in pain research, and research currently focuses on capitalizing on new knowledge of the peripheral sensory nerve function in painful conditions.[4] New techniques for sustained infusion at a single DRG level and gene delivery using viral vectors are probable new avenues for therapeutic approaches to control pain at the level of the single DRG.[4]

Severe trauma to the upper extremities can result in mixed transection of both motor and sensory somatic peripheral nerves, which can lead to functional losses without surgical management. This condition can seriously affect the patient's overall quality of life. To regain function, these nerves can be transected and reconstructed to permit axonal regeneration into distal targets muscles and terminal receptors in the skin. Some techniques used involved nerve autografts, which sacrifice healthy nerves in cases where a bridging material is needed if surgical management with tension is not appropriate.[5][6] Other alternatives include the use of commercially processed nerve allografts, which are donated human peripheral nerve tissue.[5]

Diseases affecting the peripheral nerve fibers of the somatic nervous system are called peripheral neuropathy. They can classify according to the causes, including congenital and acquired diseases. They can also classify according to the primary pathology of the axons (axonal neuropathy) or the myelin sheath (demyelinating neuropathy). The axonal peripheral neuropathy consisted of a big group of causes mostly toxic-metabolic in nature, such as diabetes mellitus and B group vitamin deficiency. They present mainly with length-dependent sensory impairment and weakness, the so-called glove and stocking distribution. Pain and temperature sensations are more selectively affected. The demyelinating neuropathies are not length-dependent. They are often immune-mediated, resulting in more diffuse sensorimotor involvement and early loss of deep tendon reflexes. The sensory involvement is more selective with joint position and vibratory sensory loss.

Numerous congenital diseases of sensory and motor control arise from either defect in the CNS, peripheral nervous system, or the muscle itself. Due to the extensive range covered by the somatic nervous system, these conditions can either localize to a region of the body or can be widespread and generalized. Some of these include.[3]Inherited:

Acquired peripheral neuropathy may include: 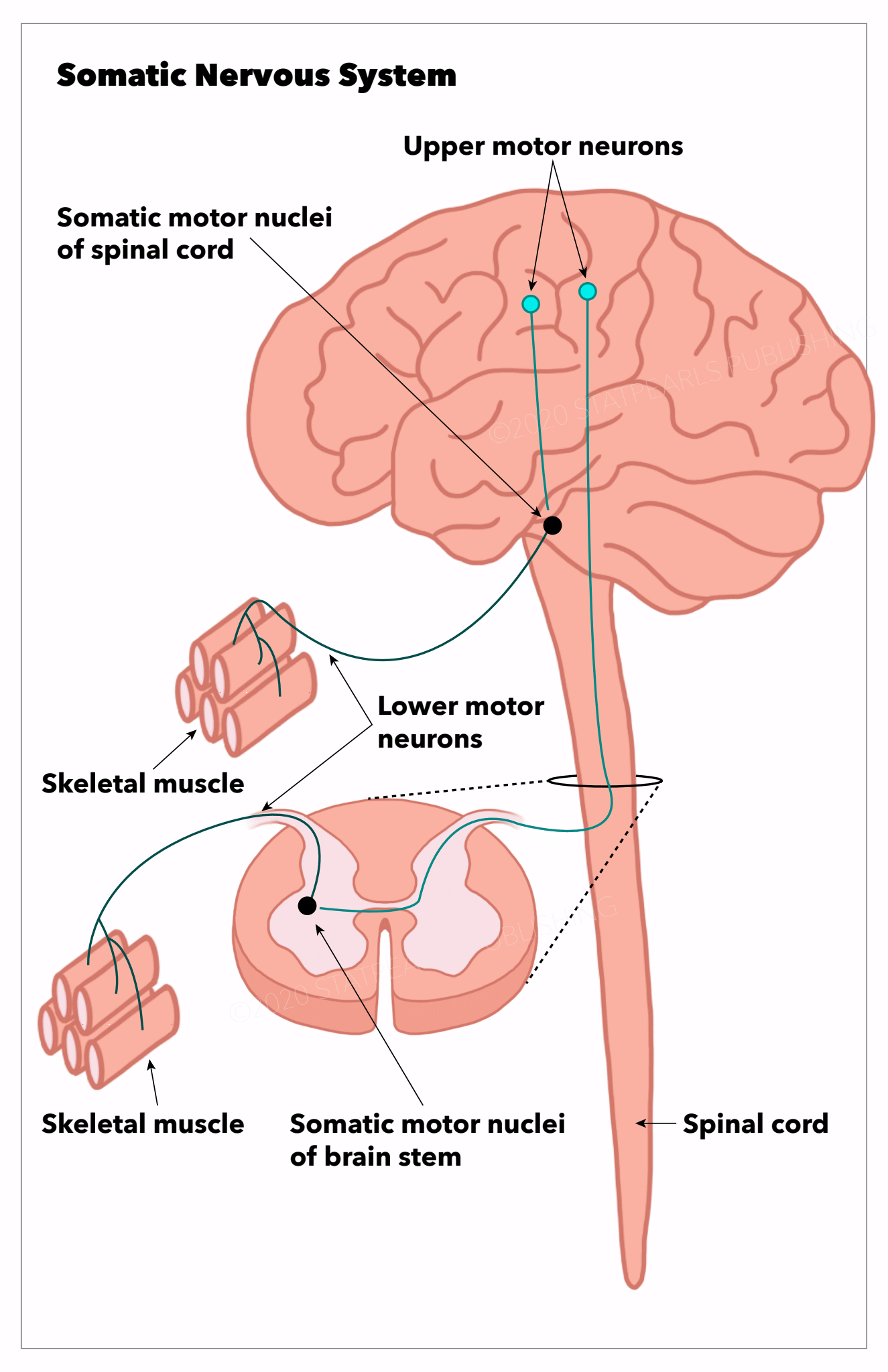