Shock is a condition when there is a discrepancy between the needs of the tissues and their supply of oxygen and nutrients. It is due to the dysfunction of the circulatory system in providing blood to the tissues to adequately meet the metabolic requirements and the insufficient removal of waste products of metabolism. The most common cause of shock in the pediatric population is hypovolemic shock, whereas, in adults, it is septic shock. Refractory shock is variably defined as persistent hypotension with end-organ dysfunction despite fluid resuscitation, high-dose vasopressors, oxygenation, and ventilation. Fluid resuscitation and vasopressors are the initial approaches to the management of shock. Overuse of fluids in critically ill patients can lead to pulmonary edema, hypoxemic respiratory failure, and organ edema.[1]

High doses of catecholamines can induce arrhythmias and ischemia.[2] The strongest predictor of mortality in critically ill patients is the vasopressor dose that is required to maintain the mean arterial pressure (MAP) goal. High dose vasopressor doses can be defined by converting other vasopressors to norepinephrine equivalents of > 0.2 micrograms/kg/min.[3] There are no standard guidelines for the management of refractory shock, but a few randomized studies guide clinical management.

Refractory shock is a vasodilatory shock resulting from the impaired responsiveness of catecholamines. Excess amounts of the vasodilatory nitric oxide (NO) and relative or absolute deficiencies of endogenous vasoactive hormones, such as vasopressin, cortisol, vitamin B1, ascorbic acid, and angiotensin II lead to vasorelaxation. Hypoxia, metabolic acidosis, and elevated lactate levels lead to activation of adenosine triphosphate-sensitive potassium channels present in smooth muscle cells, which prevents calcium entry that is required for vasoconstriction.

Refractory vasodilatory shock is seen whenever there is a cardiovascular failure. It frequently follows septic shock. Mortality in refractory shock exceeds 50%. Almost 6%-7% of critically ill patients in the ICU may develop refractory shock.[4]

Evaluation should focus on the identification of the primary cause and reversible secondary contributors, such as hypovolemia, pump failure, or obstruction that is causing shock. Patients must be placed on continuous cardiopulmonary monitoring.

The first step in management is to identify and treat the contributing etiology. Early identification and management of compensated shock help in preventing its progression to refractory shock. Fluid resuscitation in hypovolemic shock and vasopressors in fluid refractory shock should be administered. Most adult patients need a minimum MAP goal > 65 mmHg. Norepinephrine is the first-line choice of vasopressor in septic shock. In cases of cold shock with low cardiac output, epinephrine is the first-line choice of drug. Combination vasopressor therapy is expected to yield better outcomes before the onset of refractory shock has been shown with vasopressin.[5]

Vasopressin or antidiuretic hormone, which is stored and released from the posterior pituitary, is relatively deficient in sepsis. Vasopressin acts on V1 and V2 receptors, causing vascular smooth muscle contraction and water reabsorption in collecting tubules of the kidney. Unlike catecholamines, vasopressin does not cause arrhythmias and can work in an acidic environment. It has been shown to decrease catecholamine requirements and is associated with decreased mortality in less severe shock. Vasopressin, when used with a corticosteroid, has shown decreased mortality suggesting possible synergy.[6]

Minimize sedation: Sedatives are known to exacerbate hypotension through systemic vasodilation and myocardial depression. Surviving sepsis guidelines suggest minimizing sedation in patients with sepsis who are dependent on mechanical ventilation.[7]

Continuous renal replacement therapy (CRRT): It allows rapid control of temperature and metabolic acidosis correction in patients with shock. It also contributes to a reduction in vasopressor requirements and improves cardiac output. There are concerns about the removal of antibiotics and vitamins/trace elements, but appropriate compensation of antibiotics and vitamin/trace element supplementation can be done.[8]

Various rescue treatment options for refractory shock have been described to benefit hemodynamic variables, but none of these therapies has shown any definite reduction in mortality or proven superior to others.

Glucocorticoid therapy: Glucocorticoids reduce inflammation-mediated vasodilation. There could be refractory vasodilation secondary to relative adrenal insufficiency in patients with shock. Hydrocortisone can be given 100 mg every 8 hours or 50 mg every 6 hours. A synergistic effect has been reported when combined with vasopressin. Hydrocortisone infusion has shown improved shock reversal, but its effect on the duration of shock, length of intensive care unit (ICU) stay, and mortality remains controversial.[10]

Correction of acidemia: Vasopressor responsiveness decreases in acidic environments markedly when arterial pH is < 7.15 because of impaired catecholamine signaling. Sodium bicarbonate can be used to reverse metabolic acidosis, but it can cause harmful effects like respiratory acidosis, paradoxic intracellular acidosis, hypocalcemia, myocardial depression, hypernatremia, and elevated lactate levels. THAM/tromethamine is a non-bicarbonate buffer used as an alternative to sodium bicarbonate.

Vitamin C (ascorbic acid) is an important cofactor that is required for the synthesis of endogenous norepinephrine and vasopressin. Vitamin C cannot be synthesized by the body and should be given as a supplement. Critically ill patients have a relative or absolute deficiency of vitamin C, which may contribute to refractory shock due to deficiency of endogenous catecholamines. Vitamin C has powerful antioxidant properties and improves macrophage and T-cell immunity. High-dose, intravenous vitamin C (25 mg/kg or 1.5 g every 6 hours) may reduce inflammation, enhance hemodynamic variables, and organ function.

Vitamin B1 (thiamine) is an essential cofactor in oxidative energy metabolism and lactate metabolism. Relative or absolute thiamine deficiency is observed in patients with septic shock that can contribute to cardiovascular compromise and lactic acidosis. IV thiamine replacement may also be associated with improved lactate clearance and renal function and a reduced need for CRRT. Thiamine, when combined with hydrocortisone and high-dose vitamin C, has shown improved shock reversal and decreased severity of organ failure.

NO inhibitors: An overproduction by iNOS leads to vasodilation. NO can cause harmful effects on mitochondrial and organ function.

Methylene blue can reverse vasodilation caused by excessive NO signaling in septic shock and can be used in post-operative cardiac care. It may inhibit monoamine oxidase, and cause serotonin syndrome, and can increase pulmonary vascular resistance in some patients. It should be used with caution in patients who are receiving continuous venovenous hemodiafiltration, as the drug may not be eliminated by hemodiafiltration.[11]

Hydroxocobalamin, a vitamin B12 precursor, can reverse NO-mediated vasodilation by acting as an NO scavenger. Hydroxocobalamin should be used with caution in patients on hemodialysis with acute kidney injury as it remains in the bloodstream and urine for days to weeks.

Polymyxin B hemoperfusion has been shown to improve hemodynamics, organ function, and mortality.[14]

Terlipressin: It is a long-acting vasopressin analog that acts on the V1a receptor with partial selectivity. Like vasopressin, it increases MAP and reduces vasopressor requirements in vasodilatory shock. However, when administered as a bolus, it can cause a decrease in cardiac output needing inotropes.

Selepressin: It is a synthetic selective vasopressin-V1a receptor agonist. Like vasopressin, it increases MAP and decreases the catecholamine requirements but is not associated with fluid overload from retaining water and thrombosis from the release of von Willebrand factor.

Refractory shock carries a poor prognosis with mortality of up to 60%. The strongest predictor of mortality in critically ill patients is the vasopressor dose that is required to maintain the mean arterial pressure (MAP) goal. Decreased mortality has been reported with the use of vasopressin and angiotensin II in patients with less severe shock (with baseline norepinephrine requirements <15 mg/min).

Early initiation of combination vasopressor therapy has shown a mortality benefit. Reversal of shock can be achieved with hydrocortisone and vasopressin. The use of vasopressin and angiotensin II has shown a decrease in mortality in patients with less severe shock.

Refractory shock carries a mortality rate of up to 60%. The key to survival is to identify the cause and treat promptly and initiate combination vasopressor therapy early. Unfortunately, even with multiple rescue therapies, multi-organ failure is common, so patient monitoring is vital. An interprofessional team of intensivists, ICU nurses, and pharmacists should work together in identifying any drug interactions and choice of rescue therapy. The ICU nurses should monitor the patient for signs of organ failure like oliguria, poor oxygenation, coagulopathy, loss of pulses, abdominal pain (secondary to mesenteric ischemia), and stroke. Close communication is important between the interprofessional team to improve outcomes. If the patient undergoes cardiac surgery, monitoring complications is vital. 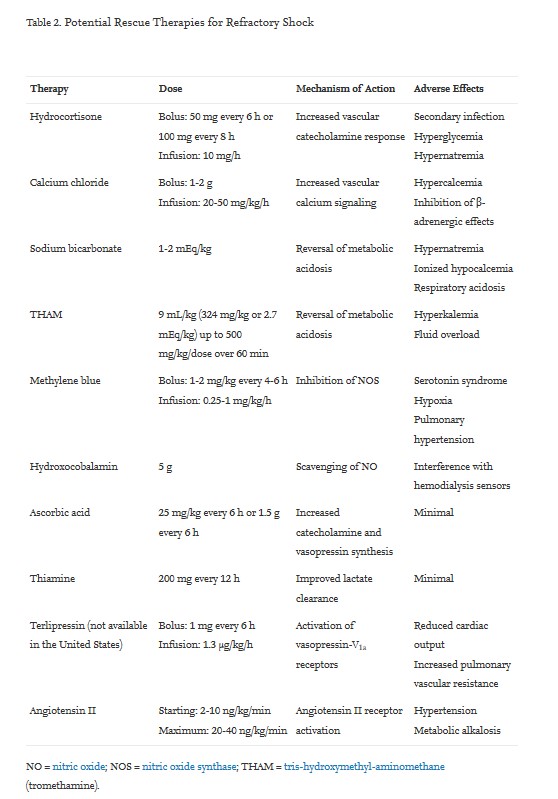 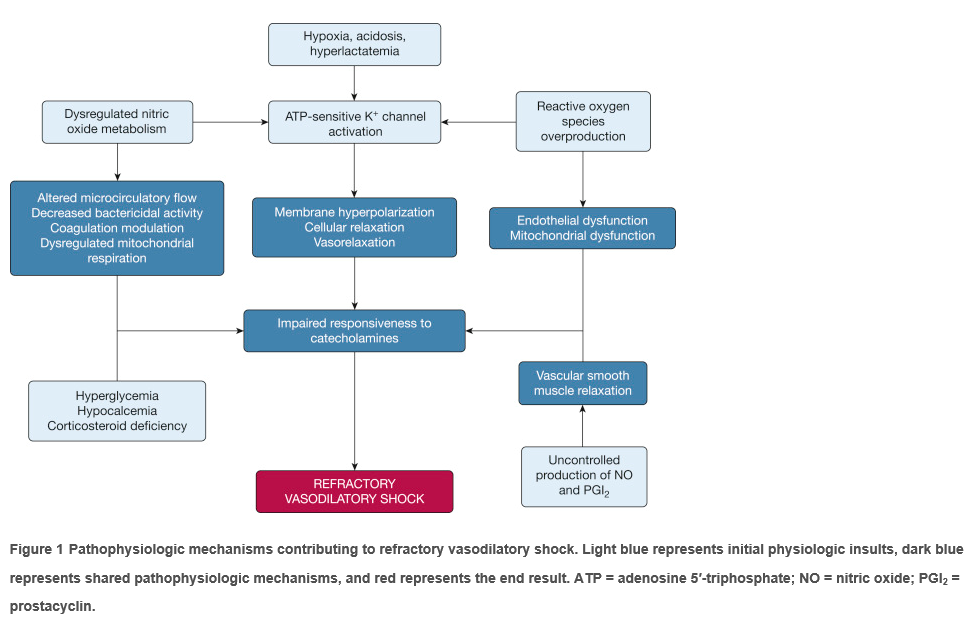 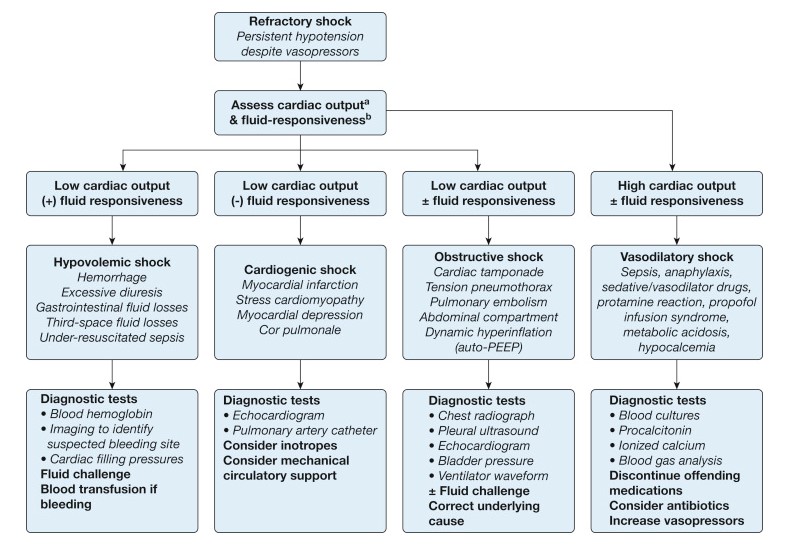 Suggested diagnostic approach for identifying reversible contributors to refractory shock, based on assessment of cardiac output and fluid responsiveness. a Measurement of central or mixed venous oxygen saturation can be used as a surrogate for cardiac output in many patients. b Measures of fluid responsiveness can include respiratory pulse-pressure or stroke volume variation and passive straight-leg raise. PEEP = positive end-expiratory pressure.
Contributed by Jacob C. Jentzer, MD 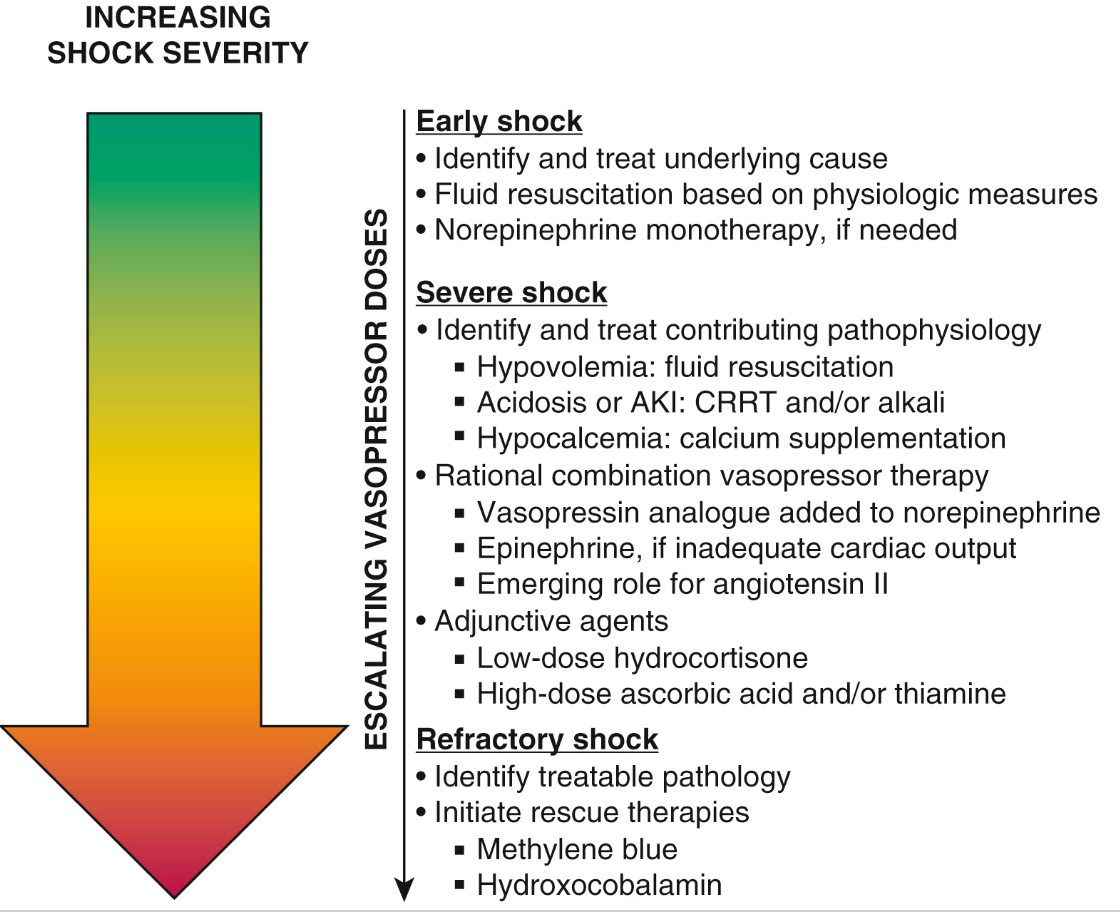 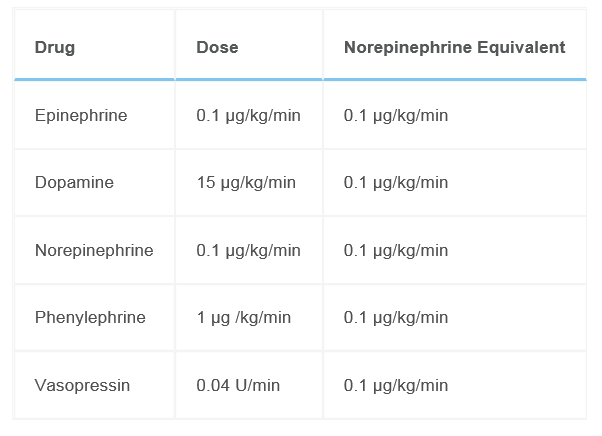