The anterolateral aspect of the abdominal cavity, which holds multiple vital organs, is surrounded by an abdominal wall. This wall is made up of different layers that serve to protect the organs of the digestive system. These layers, from superficial to deep, include skin, Camper fascia, Scarpa fascia, external oblique muscle, internal oblique muscle, transversus abdominis muscle, transversalis fascia, and parietal peritoneum.

Linea semilunaris, sometimes referred to as the semilunar line or Spigelian line, makes the set of visibly well-developed abdominal muscles (also called as "six-pack") that athletes desire possible. This fibrous, pearly-white connective tissue is a type of aponeurosis that can function as fascia, which envelopes muscles and organs. It also binds the muscles in the anterolateral abdominal wall together.

Embryonic differentiation gives rise to three separate layers: outer ectoderm, middle mesoderm, and inner endoderm. Mesoderm further differentiates into splanchnic mesoderm, which gives rise to abdominal viscera, and somatic mesoderm, which gives rise to the abdominal wall. By the end of the sixth week of gestation, muscle cells migrating from myotomes (a group of muscles innervated by a single nerve) into the somatic mesoderm on both sides of the vertebral column form the anterior abdominal wall muscles and their aponeuroses. Linea semilunaris also originates through this process.

The transverse rectus abdominis myocutaneous (TRAM) flap procedure is a commonly used procedure for breast reconstruction. In this procedure, surgeons will create a free flap using both anterior abdominal wall tissue and the rectus abdominis muscle. These structures are disconnected from their blood supply in the abdomen and reconnected to the new blood supply in the chest. It is, therefore, imperative that surgeons are aware of the anatomy of the anterior abdomen, including variations in tendinous intersections and their blood supply. It is of particular importance because tendinous intersections are a site where many blood vessels anastomose.[6]

Linea semilunaris is one of the weak points in the anterior abdominal wall. Therefore, this area is particularly susceptible to herniation of abdominal content or peritoneum. This hernia, known as a Spigelian hernia, has a relatively high risk of incarceration, and therefore surgical repair is recommended.[7][8]

Several different incisions can provide access to the abdominal cavity. These include midline/median, paramedian, transverse, Pfannenstiel, and subcostal incisions. In a "Paramedian Approach" to the abdominal cavity, linea semilunaris is the landmark usually used. In this approach, a vertical incision is made either in or lateral to the linea semilunaris, giving access to retroperitoneal structures. This approach has, however, fallen out of favor due to the risk of nerve injury and hematomas, as well as for cosmetic reasons.[9]

Spigelian fascia is a layer of aponeurosis located along the linea semilunaris, and it is comprised of both transversus abdominis and internal oblique aponeuroses. Rarely, a point of weakness may develop in the anterior abdominal wall fascia, particularly the Spigelian fascia, resulting in herniation of abdominal content or peritoneum through that fascia; this is known as a Spigelian hernia (SH), or a lateral ventral hernia.[7]

Spigelian hernias can occur anywhere along the linea semilunaris. They most often occur at or below the arcuate line due to the lack of posterior sheath at those levels. The incidence of Spigelian hernias ranges between 1 and 2% of abdominal hernias.[10] This type of hernia is seen mainly in females and in adults over 60 years of age. Risk factors include conditions that lead to increased intra-abdominal pressure or weakening of abdominal fascial layers. Examples include patients with chronic obstructive pulmonary disease (COPD), which causes chronic cough, patients with ascites secondary to liver cirrhosis, pregnant patients, or obese patients.[10]

The majority of Spigelian hernias occur on the right side, lateral to the inferior epigastric vessels. A Spigelian hernia may exist with ipsilateral cryptorchidism in 75% of male infants. This condition has the name Spigelian-cryptorchidism syndrome and is typically secondary to a congenital process.[11] 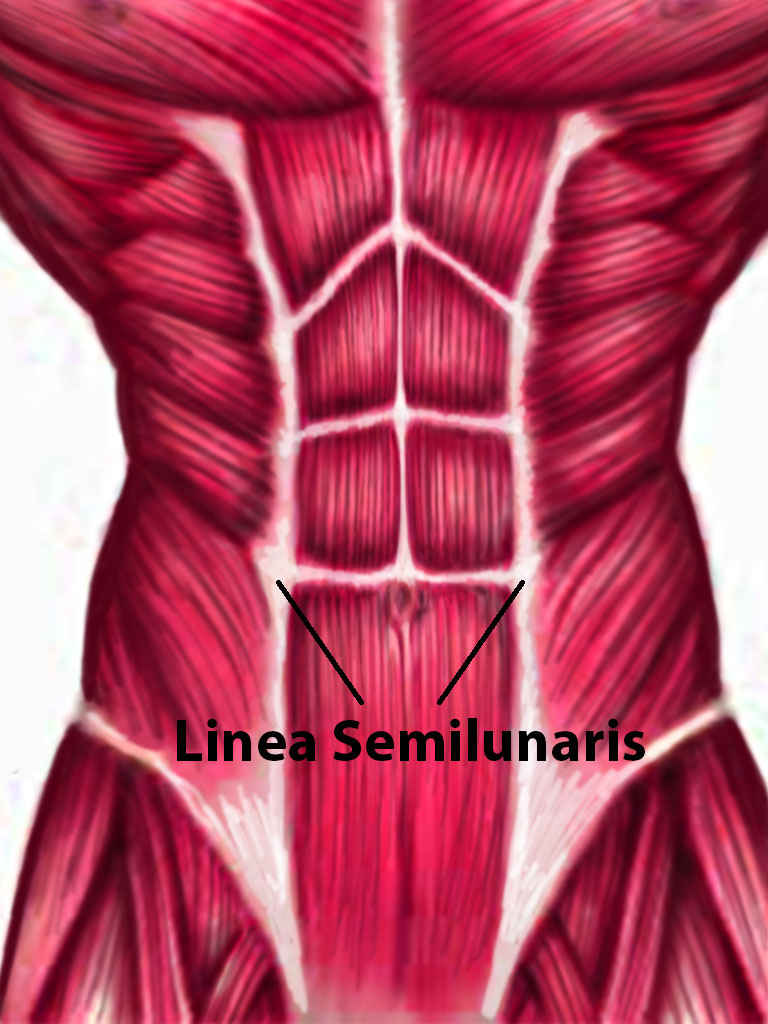 Monkhouse WS,Khalique A, Variations in the composition of the human rectus sheath: a study of the anterior abdominal wall. Journal of anatomy. 1986 Apr;     [PubMed PMID: 2962970]