The pancreas is a composite organ, which has exocrine and endocrine functions. The endocrine portion is arranged as discrete islets of Langerhans, which are composed of five different endocrine cell types (alpha, beta, delta, epsilon, and upsilon) secreting at least five hormones including glucagon, insulin, somatostatin, ghrelin, and pancreatic polypeptide, respectively.

Pancreatic Hormones and Their Function[1][2][3]

Source: Beta cells of islets of the pancreas.

Synthesis: Insulin is a peptide hormone. The insulin mRNA is translated as a single-chain precursor called preproinsulin, and removal of its signal peptide during insertion into the endoplasmic reticulum generates proinsulin. Within the endoplasmic reticulum, proinsulin is exposed to several specific endopeptidases, which excise the C peptide (one of three domains of proinsulin), thereby generating the mature form of insulin. Insulin is secreted from the cell by exocytosis and diffuses into islet capillary blood. C-peptide is also secreted into the blood in a 1:1 molar ratio with insulin. Although C-peptide has no established biological action, it is used as a useful marker for insulin secretion.

Mechanism of action: Insulin binds to a specific receptor tyrosine kinase on the plasma membrane and increases its activity to phosphorylate numerous regulatory enzymes and other protein substrates.

Regulation of its secretion:

Glucagon is also known to be a strong insulin secretagogue.

Source: Beta cells of islets of the pancreas. It is co-secreted with insulin in response to caloric intake (feeding state).

Target cells: Alpha cells of islets of pancreas and hypothalamus.

Physiological functions: it suppresses glucagon secretion from the alpha cells of the islets in the pancreas via paracrine interaction between beta cells and alpha cells. Amylin also slows gastric emptying which delays absorption of glucose from the small intestine into the circulation. Also, it stimulates the satiety center of the brain to limit food consumption.

Source: Alpha cells of islets of the pancreas.

Synthesis: The initial gene product is the mRNA encoding preproglucagon. A peptidase removes the signal sequence of preproglucagon during translation of the mRNA in the rough endoplasmic reticulum to yield proglucagon. Proteases in the alpha cells subsequently cleave the proglucagon into the mature glucagon molecule.

Mechanism of action: glucagon binds to a receptor that activates the heterotrimeric G protein Gas, which stimulates membrane-bound adenylyl cyclase. The cAMP formed by adenylyl cyclase, in turn, activates PKA, which phosphorylates numerous regulatory enzymes and other protein substrates.

Regulation of its secretion: The amino acids released by digestion of a protein meal appear to be the main determinant of glucagon secretion.

Physiological functions: Glucagon acts exclusively on the liver to antagonize insulin effects on hepatocytes. It enhances glycogenolysis and gluconeogenesis. It also promotes oxidation of fat, which can lead to the formation of ketone bodies.

Source: Delta cells of the islets of the pancreas, hypothalamus and D cells of gastric glands.

Target cells: Beta cells of islets of the pancreas, somatotroph cells in the anterior pituitary gland and the G cells of the gastric glands.

Mechanism of action: Somatostatin binds to a receptor that activates the heterotrimeric inhibitory G protein, which inhibits membrane-bound adenylyl cyclase and cAMP formation.

Regulation of its secretion: Glucagon stimulates somatostatin secretion via paracrine interaction between alpha cells and delta cells of the islets of the pancreas.

Source: Epsilon cells of the islets of the pancreas, endocrine cells in the stomach and hypothalamus.

Target cells: Beta cells of the islets of the pancreas and somatotroph cells in the anterior pituitary gland.

Diabetes Mellitus (DM) is a chronic disease that occurs when the pancreas cannot produce enough insulin, or the body cannot effectively utilize insulin, which results in high glucose plasma level (hyperglycemia) causing tissue damage over time. There are two common types of DM that account for the majority of cases: type 1 and type 2.[4][5][6]

It is a chronic autoimmune disease in which the beta cells of islets of the pancreas are destroyed resulting in insulin deficiency.

Pathophysiology: It is not entirely understood yet, but it is caused by a combination of events in genetically susceptible individuals. Three mechanisms lead to islet cell destruction: genetic susceptibility, autoimmunity, and environmental insult(s). A virus or allergen (environmental insults) in genetically susceptible individuals induces the production of autoantibodies to Beta cells of the islets of the pancreas. This autoimmune reaction creates autoreactive T cells that destroy beta-islet cells and cause loss of insulin secretion.

Diagnosis: The serum autoantibodies serve as a marker. The autoantibodies are typically present years before the diagnosis of T1DM is made because clinical manifestations appear after 80% of beta-islet cells have been destroyed.[7]

It is a progressive disease that develops due to a continued decline in beta-cell function and/or due to a defect in insulin sensitivity that causes hyperglycemia. The development and rate of progression of T2D are influenced by both genetic and environmental factors, such as obesity and physical inactivity.

Pathophysiology: Beta-cell dysfunction manifests in different ways: (1) reductions in insulin release, (2) changes in pulsatile insulin secretion, (3) an abnormality in the efficiency of proinsulin to insulin conversion, and (4) reduces the release of amylin. Insulin resistance is present in most patients with T2D. Insulin resistance is characterized by higher than expected plasma glucose level with the prevailing plasma insulin secretion. In patients with T2D insulin, stimulation fails to induce normal GLUT4 protein translocation to the sarcolemma in skeletal muscle membrane. Also, excessive production of free fatty acids and overexpression of TNF-alpha by adipocytes have been proposed as mechanisms for the development of insulin resistance.[8] 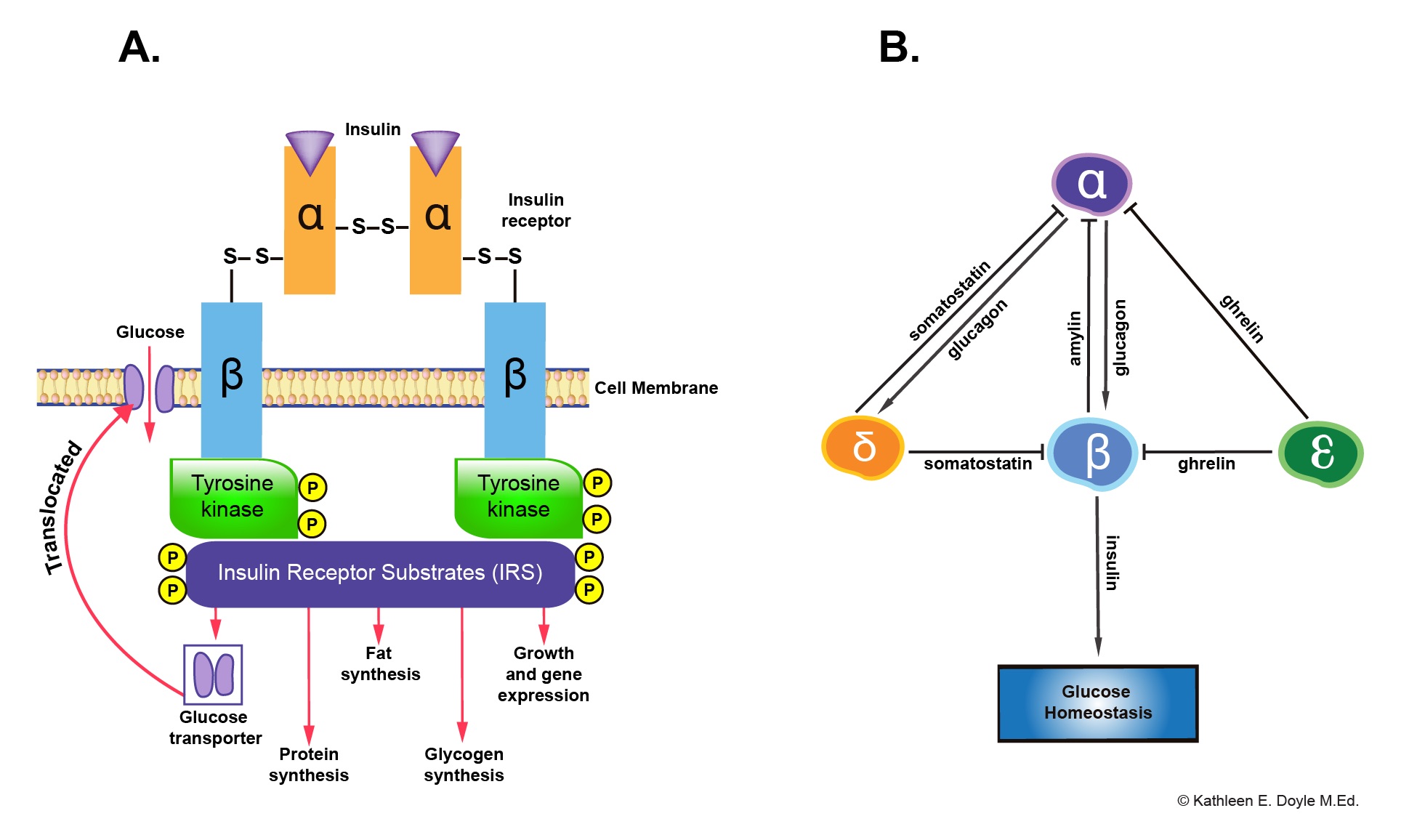 Matschinsky FM,Wilson DF, The Central Role of Glucokinase in Glucose Homeostasis: A Perspective 50 Years After Demonstrating the Presence of the Enzyme in Islets of Langerhans. Frontiers in physiology. 2019;     [PubMed PMID: 30949058]