The veins of the scalp serve to drain the deoxygenated blood from the scalp muscles and back to the right heart via the internal and external jugular veins and the superior vena cava. As previously mentioned, there are also the valveless emissary veins that connect the superficial veins to intracranial venous sinuses and diploic veins of the skull.

We will describe the blood supply and lymphatics of the scalp veins starting with the superficial components anteriorly and moving posteriorly, beginning with the supratrochlear vein.

The superficial temporal vein has frontal and parietal branches, serving to drain the superficial muscles and skin of the temporal region. It originates from a venous plexus on the side of the head and travels laterally from the temporal region over the zygomatic arch and entering the parotid gland to become the retromandibular vein where it joins the transverse facial vein. The retromandibular vein then drains into the internal jugular vein via its anterior branch, and the external jugular vein via its posterior branch. The frontal branch also connects to a parietal emissary vein that runs from the side of the head to the top of the head where it pierces the cranium and communicates with the superior sagittal sinus. The parietal branch anastomoses with the occipital vein. The parotid and auricular lymph vessels that are located both anteriorly and posteriorly of the superficial temporal vein and artery, and the superficial parotid and preauricular lymph nodes located posteriorly, drain the area supplied by the branches of the superficial temporal artery.

The venous drainage of the deep scalp layers is via the pterygoid venous plexus, an extensive plexus of veins located between the lateral pterygoid and temporalis muscles, draining into the maxillary vein. It receives branches corresponding with the branches of the maxillary artery. These veins include:

The pterygoid venous plexus also receives blood from some branches of the palatine veins and contains a communicating vein that travels through the inferior orbital fissure to connect the ophthalmic vein to the cavernous sinus.

Again, working our way anteriorly to posteriorly, we will list the nerves that are present near the scalp veins.

The temporal branches of the facial nerve are located between the zygomatic orbital vein (a non-scalp vein) inferiorly, and the frontal branch of the superficial temporal vein superiorly and posteriorly.

The auriculotemporal nerve runs just anterior and deep to the superficial temporal artery and vein.

Sandwiching the occipital artery and vein are the lesser and greater occipital nerve branches, superficially and anteriorly, and posteriorly, respectively.

The parietal emissary vein most commonly communicates with the superficial temporal vein, specifically the frontal branch, but may communicate with other scalp veins. The occipital emissary vein may not be present in all individuals. The multiple anastomoses of the scalp may also have variability in what branches of what veins interconnect.

Deep lacerations to the scalp are inclined to bleed profusely for several reasons:

Scalp arteriovenous malformations (AVM), or cirsoid aneurysms, are uncommon lesions whose etiologies are most commonly congenital, post-infectious, or traumatic.[4] These AVMs often comprise arterial blood from the superficial temporal or occipital arteries and venous outflow into extracranial venous structures. Treatment of AVMs typically consists of endovascular embolization, which is followed by surgical resection; therefore, variant arterial supply, as well as venous drainage, should be considered in these cases.

Subgaleal hematoma (SGH) is an abnormal collection of blood beneath the galea aponeurosis of the scalp, commonly caused by traumatic shearing of emissary veins in the loose areolar tissue. This condition is more commonly seen in neonates, infants, and small children, although there have been case reports of SGHs occurring in adults. [5] Mild trauma typically occurs via contusion, hair pulling, or vacuum-assisted vaginal delivery. Treatment is conservative management with bandage compression.

The ‘danger area of the scalp’ refers to the layer of loose areolar connective tissue as it contains the valveless emissary veins that connect the superficial veins in the subaponeurotic space with the intracranial venous sinuses. This connection makes it possible for an infection to spread from the scalp to the meninges.

Cavernous sinus thrombosis is the development of a blood clot within the cavernous sinus. The cavernous sinus is one of the dural venous sinuses, a cavity at the base of the brain that helps drains deoxygenated blood from the brain via the superior and inferior ophthalmic veins, the superficial middle cerebral veins, the sphenoparietal sinus, and the inferior cerebral veins. The cavernous sinus has connections to the pterygoid venous plexus via the inferior ophthalmic vein, deep facial vein, and emissary veins. Due to this connection, superficial facial infections from the nose, sinuses, ears, or teeth may spread to the cavernous sinus to cause this disorder. Symptoms may include proptosis, unilateral periorbital edema, decrease or loss of vision, headaches, and possible cranial nerve paralysis, particularly of the delicate abducens nerve that runs through the cavernous sinus. There are two types of cavernous sinus thromboses: septic and aseptic. Treatment of septic disease includes initial broad-spectrum IV antibiotics covering staph and strep, the most commonly associated bacteria, then a prolonged course (3 to 4) weeks of targeted IV antibiotics. Surgical drainage may be necessary in cases of sphenoidal sinus infection.[6]

Scalp veins may be used for venous catheterization as they offer easy access with little risk.[7] Most commonly, scalp catheterization is utilized in infants and neonates after unsuccessful attempts at cannulation of extremity veins as the scalp veins in this population have less overlying subcutaneous fat and are more prominent compared to other peripheral sites, and they are less obscured by hair. These factors allow for easier visualization and therefore cannulation. The most commonly used veins are the superficial temporal, the supratrochlear, and occipital veins. 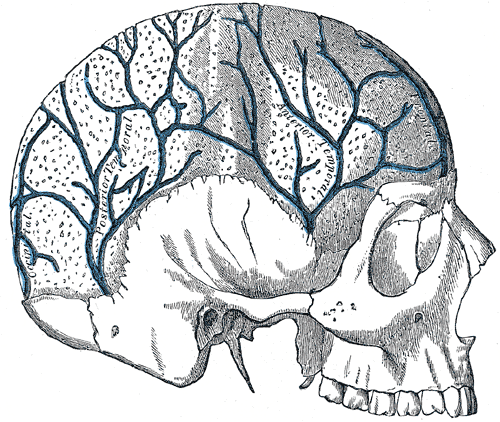