The structure of eye arteries is similar to that of arteries throughout the body. Arteries are considered rigid vessels in comparison to veins. The arterial wall consists of a tunica intima, tunica media, and tunica externa. Arteries in the eye are also susceptible to damage by glycosylation reactions and plaque deposition in patients with diabetes and hypertension which are two common risk factors for ocular pathology.[4]

Eye development takes place from week 3 to week 10. Ocular blood vessels originate from mesenchyme. First, optic grooves grow outward, forming optic vesicles. The optic vesicles attach to the forebrain via the optic stalk which later becomes the optic nerve. On the inferior surface of the optic vesicles and stalk a C-shaped fissure, known as the choroidal fissure, forms. The choroidal fissure serves as the entrance point for blood vessels. Through this fissure, the hyaloid artery can access the growing lens.[5] By week 10, the distal portion of the hyaloid artery disintegrates, and the proximal portion remains as the central retinal artery.

Persistent fetal vasculature can lead to impairment in vision or even blindness. Ocular examination findings vary depending on degree and area of vessel persistence.[6]

Ocular lymphatics correlate more closely with the venous system. Findings show that ocular structures differ in their lymphatic makeup. The retina is lymphatic free, the lacrimal glands are lymphatic rich, and the iris is lymphatic inducible.[7]

Central retinal artery occlusion (CRAO) is a stroke of the eye. The central retinal artery is an end artery; hence, its occlusion presents with sudden, painless monocular vision loss. CRAO is an ophthalmologic emergency. Individuals with carotid artery disease and atherosclerotic plaque deposition are at highest risk. Emboli are the most common etiology of CRAO. On ocular examination, patients may have a cherry-red spot (90%), retinal opacity in the posterior pole (58%), optic disk pallor (39%), retinal arterial attenuation (32%), optic disk edema (22%), intra-arterial emboli (20%), and/or cattle trucking (19%).[3] On fluorescein angiography, delayed filling time of the affected vessel may be present. Treatment includes acute reperfusion of the central retinal artery and prevention of future vascular ischemic events. Carotid duplex is the recommendation when a patient presents with painless, monocular vision loss because of the high risk of another ischemic event.[9][10]

The definition of amaurosis fugax is transient vision loss, often monocular and painless. The pathophysiology is similar to that of CRAO: occlusion or stenosis within the internal carotid circulation. Similar to CRAO, on ocular examination one may find cholesterol plaques (Hollenhorst plaques). Amaurosis fugax is also a manifestation of fibromuscular dysplasia and may be suggestive of brain ischemia in patients with this diagnosis. [11]

Retinoblastoma is a childhood ocular tumor. One treatment method is intra-arterial chemotherapy.[12] Selective occlusion of eye arteries has proven to have less systemic side effects in comparison to systemic chemotherapy.

Ocular manifestations of hypertension, aptly named hypertensive retinopathy, are seen as progressive microvascular changes. In its mild form, examination reveals mild arteriolar narrowing and arteriovenous nicking. [4] As the disease progresses there may be evidence of microaneurysms, hemorrhage, and cotton-wool spots.

The choriocapillaris supplies the outer layer of the retina including the fovea centralis, the area of the highest cone concentration in the retina. 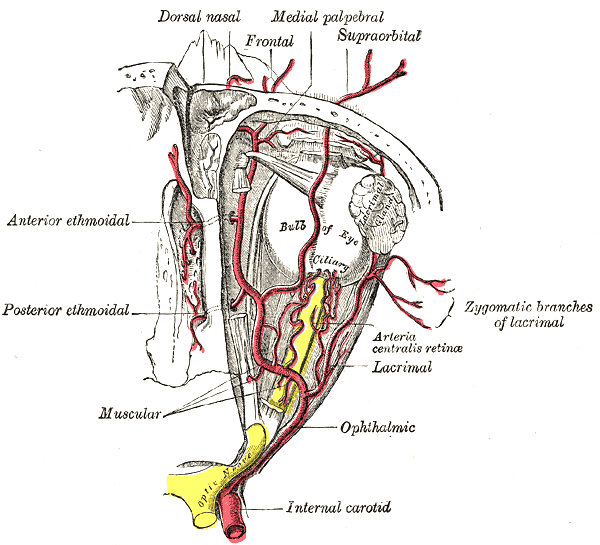