Clear cell acanthoma is an uncommonly made diagnosis. Clear cell acanthomas are benign lesions of unknown etiology with characteristic physical exam features and various treatment options. This activity reviews the clinical presentation, tools used to aid in the diagnosis, and treatment methods for this lesion and reviews the role of the interprofessional team in managing patients who present with this lesion.

Clear cell acanthoma (CCA), also known as “Degos acanthoma” and “acanthome cellules Claires of Degos and Civatte,” was first described by Degos et al. in 1962.[1] It is a rare, benign tumor of unknown etiology. Although most commonly located on the lower extremities, clear cell acanthomas can also appear on the trunk, forearm, face, inguinal area, and few cases of nipple and areola lesions have been reported. Lesions are usually solitary; however, there are reports of rare cases of multiple disseminated clear cell acanthomas.[2] These tumors clinically present in middle-aged to elderly individuals as an asymptomatic, slowly enlarging, red or red-brown, dome-shaped papule or nodule with a wafer-like scale collarette.  Prognosis is excellent for these lesions as they are benign. Skin biopsy is usually performed to confirm the diagnosis, but a variety of other methods can also accomplish the removal.

The exact etiology of clear cell acanthoma is unknown. It is unclear whether clear cell acanthoma represents a benign neoplasm or a reactive inflammatory dermatosis. For those that consider this entity to be a tumor, there is further disagreement whether this is a tumor of epidermal, pilar, or sweat gland origin. Most experts maintain that clear cell acanthoma is an epidermal tumor, as originally described.[3] Some argue that it is a variant of seborrheic keratosis with the keratinocytes containing abundant amounts of glycogen. The argument that this represents a reactive inflammatory dermatosis is supported by studies that used immunohistochemical staining to show that these lesions express cytokeratins similar to those seen in other inflammatory dermatoses, such as psoriasis.[4][5] There have also been reports of clear cell acanthomas developing on top of pre-existing psoriatic plaques, which further supports this argument.[6] Research has described an association between clear cell acanthomas and other conditions including stasis dermatitis, varicose veins, viral infections, and arthropod bites, among others.[3]

Clear cell acanthomas occur equally in both sexes. Most cases occur in middle-aged persons, with a peak incidence between 50 and 60 years of age. Clear cell acanthoma does not appear to occur in children. There are no racial or ethnic predilections for this tumor.[2]

Light microscopy with hematoxylin and eosin (H&E) staining reveals a well-demarcated area of acanthotic epidermis with regular psoriasiform hyperplasia comprised of pale staining keratinocytes. An abrupt transition from the normal-appearing non-lesional epidermis to the paler acanthotic lesional epidermis is readily apparent. The pale keratinocytes are replete with intracellular glycogen which stains positive with periodic acid–Schiff (PAS) and are diastase sensitive. The pigmented clear cell acanthoma or melanoacanthoma histologically, as well as clinically varies from a typical clear cell acanthoma in that it shows a higher number of melanocytes and increased levels of melanin within the lesion.[2] To date, three case reports exist detailing “atypical clear cell acanthoma.” Grunwald et al. reported two cases, and Lin et al. reported a case, all of which had marked cytologic atypia and mitoses.[7][8]  Although malignant features developed in these lesions, there are no reports of recurrence or metastasis. Parsons et al. described a case of squamous cell carcinoma in situ occurring within a clear cell acanthoma.[9]

A clear cell acanthoma presents as a solitary, red or red-brown, dome-shaped papule or nodule. A peripheral, wafer-like scale collarette is classically described in a majority of lesions, but may not always be present. The surface may also have a crusted or moist appearance and may bleed with minor trauma. These tumors slowly enlarge over several years and range in size from a few millimeters to 2 centimeters.[3] Some further describe clear cell acanthomas as having a stuck-on appearance. Clear cell acanthomas most commonly occur on the lower extremities. Other less common sites of involvement include the trunk, forearm, face, inguinal area, nipple, scalp, and vermilion mucosa of the lip.[10] There are several clinical variants including giant, polypoid or pedunculated, pigmented, eruptive, atypical, and cystic.[2]

Dermoscopy can be utilized to aid in diagnosing a clear cell acanthoma. Dermoscopy reveals a highly characteristic pattern that can assist in the diagnosis. Glomerular or pinpoint blood vessels present in a curvilinear and reticular pattern with a “pearl necklace” appearance. This “pearl necklace” pattern differs from other lesions that also contain glomerular or pinpoint vessels making it distinct compared to clear cell acanthoma.[11][12] Ultimately a skin biopsy is usually performed to confirm the diagnosis.

The preferred management of clear cell acanthomas is complete removal, which can be done by a variety of different methods. The location, size, and the number of lesions should be considerations when deciding on a treatment method. Shave removal or curettage followed by electrofulguration is a common approach. Other treatment options include cryotherapy, electrofulguration alone, standard surgical excision, and carbon dioxide laser.[2] In cases where treatment involves multiple lesions, cryotherapy, or carbon dioxide laser may be the preferred method.[13][14][15]

Clear cell acanthomas are considered to be benign lesions. The lesions slowly enlarge over several years and do persist. There has been only one case report, by Garcia-Gavin et al., where spontaneous regression of lesions occurred. This scenario took place in a patient with multiple eruptive lesions, several of which spontaneously regressed leaving behind residual post-inflammatory hyperpigmentation.[16] While a few case reports exist of “atypical” clear cell acanthomas, as previously mentioned, none of these metastasized or recurred. Removal of a clear cell acanthoma via various methods is curative.

Complications of complete removal include scarring, hypopigmentation, hyperpigmentation, and infection, depending on the technique used for removal. Patients should receive education regarding the possibility of scarring as a side effect of any technique with the extirpation of tissue. Cryotherapy can lead to hypopigmentation, more prominently in darker skinned individuals, through the destruction of local melanocytes.

In cases where the diagnosis is certain, the practitioner should counsel the patient that this is a benign lesion; however, it will not resolve spontaneously. They should understand the various methods that are options for removal and that scarring is a likely outcome with any method. In cases where the diagnosis is uncertain, a biopsy of the lesion is the recommendation, which can also result in scarring.

Patients with clear cell acanthomas may present to their primary care clinician, urgent care clinic, or directly to a dermatologist. When the diagnosis is uncertain, and a biopsy performed, the provider should communicate with the pathologist to ensure evaluation of the lesion for the presence of atypia or malignancy. Various providers can treat these lesions within their level of comfort. Referral to the appropriate specialist is necessary if treatment is outside the comfort or experience of the provider. All caregivers involved should be aware of the diagnostic and treatment options, and an interprofessional team approach including various medical specialties (pathologist, surgeon, oncologist, etc.), and nursing to facilitate care, should be employed for optimal patient outcomes.

Even though it is not malignant, clear cell acanthoma requires an interprofessional team approach, including primary clinicians, specialists, specialty-trained nurses, and when needed, pharmacists, all collaborating across disciplines to achieve optimal patient results. [Level 5] 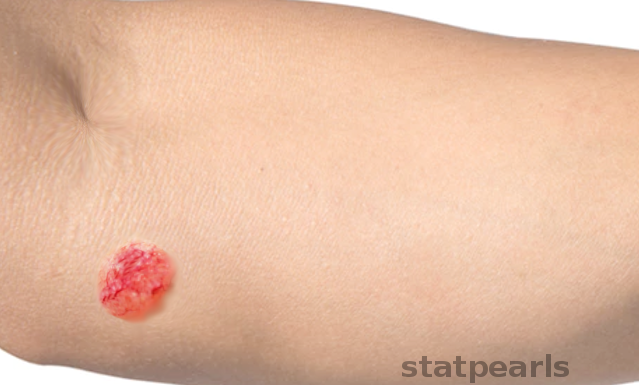