Vasodilators are useful in the management of hypertension, angina, heart failure, myocardial infarction, and more. This activity reviews the indications, actions, and contraindications for vasodilation therapy as a valuable agent in the treatment of hypertension and other related disorders. This activity will also highlight the mechanism of action, adverse event profile, and other key factors pertinent to members of the interprofessional team in the treatment of patients with hypertension and related conditions.

Vasodilators are useful in treating a variety of medical conditions, most commonly systemic hypertension.[1] Other diseases include myocardial infarction (both ST-segment elevation and non-ST-segment elevation), angina, heart failure, stroke, chronic kidney disease, preeclampsia, hypertensive emergency. There are different classes of vasodilators used today in the current clinical practice, and each has different actions on the coronary arteries and peripheral vasculature (arteries and veins). Vasodilators most commonly affect the arteries in the human body, but some vasodilators (such as nitroglycerin) can affect the venous system of the body predominantly.

Several different vasodilators have undergone development over the years, as mentioned below.[2]

Renin-angiotensin-aldosterone system blockers such as ACE inhibitors and ARBs are first-line of the treatment in patients with heart failure, history of ST-elevation myocardial infarction, diabetes, or proteinuria. Both groups of medications have cardioprotective and renoprotective effects.

Clinicians can use many vasodilators in preeclampsia, which is a condition seen in the pregnancy characterized by severe hypertension and proteinuria. If not treated quickly, patients can develop seizures. ACE Inhibitors and ARBs are contraindicated in pregnancy due to teratogenicity. Hydralazine and calcium channel blockers (amlodipine, nifedipine) are safe to use in these circumstances.

This review will focus more on direct-acting vasodilators, calcium channel blockers, and renin-angiotensin-aldosterone antagonists as these classes of medications are more commonly used in the current practice.

In general, Vasodilators dilate or prevent constriction of the blood vessels, which allow greater blood flow to various organs in the body.[3] Many vasodilators bind to receptors on endothelial cells of the blood vessel, which stimulate calcium release. Calcium activates the enzyme nitric oxide synthase (NO synthase) and converts L-arginine into NO. It leaves the endothelial cell via diffusion and enters vascular smooth muscle cells. NO activates GTP and converts it into cGMP. cGMP then stimulates myosin-light chain phosphatase, which removes a single phosphate from myosin and actin filaments. The dephosphorylation of myosin and actin filaments allows vascular smooth muscle relaxation.

Below are the specific mechanisms of action for different classes of vasodilators:

Vasodilators can be administered in a variety of ways, including sublingual, IV, oral.[5]

Depending on the clinical setting, some routes of administration can be more beneficial than others. For example, in the setting of acute myocardial infarction (MI), patients will more likely benefit from sublingual nitroglycerin, as it is absorbed much faster by the sublingual route and allows the patient to feel more comfortable and often reduces the chest pain.[6] Whereas for the patients who need to reduce their blood pressure in a non-emergent manner, the oral route is an acceptable route of administration.

Nitrovasodilators such as nitroprusside and nitroglycerin are frequently used in hypertensive emergencies. Sodium nitroprusside administration is via the intravenous route in such conditions. It starts blood pressure-lowering action within one minute or less, and these effects disappear within 10 minutes after discontinuation. Frequent clinical monitoring is necessary during the administration of this medication.

Similar to nitroprusside, nitroglycerin can be used intravenously in certain conditions. It has very similar kinetic, but it produces greater venodilation compared to arteriolar dilation. Extended used is generally avoided due to concerns of tachyphylaxis.

Severe hypertension during labor should be treated with intravenous labetalol/hydralazine or oral nifedipine to prevent intracranial hemorrhage or eclampsia.

Calcium channel blockers such as clevidipine and nicardipine can be used intravenously in hypertensive emergencies while amlodipine, nifedipine are oral formulations that are used in routine hypertension management.

Nebivolol and carvedilol are taken orally to treat hypertension.

ACE Inhibitors:  angioedema, dry cough (due to increased bradykinin levels), teratogenicity, hyperkalemia, and hypotension.[7] There have been studies that show that the use of ACE inhibitors can increase a patient's risk of developing acute pancreatitis.[8] Examples: enalapril, lisinopril, captopril, ramipril.

Nitroprusside: Nitroprusside is metabolized to cyanide, and it can lead to cyanide toxicity. Toxicity can appear as little as four hours after initiation of infusion. Potential risk factors for the development of toxicity are underlying renal impairment, prolonged treatment period (over 48 hours), and the utilization of a higher dose.[12]

Minoxidil: hypertrichosis, water retention, pericarditis that may progress to tamponade.

Americal Heart Association/American Stroke Association recommends not reducing blood pressure during the initial 24 hours of ischemic stroke unless it is over 220/120 mm Hg to prevent the worsening of ischemic injury. In the patient with ischemic stroke, BP requires lowering to less than 180/110 mm Hg before administering alteplase with intravenous labetalol/nicardipine.

ARBs: ARBs are teratogens and should not be used in pregnant patients.

Nitrates: Nitrates decrease preload, so the administration of nitrates would be contraindicated in a person having an inferior MI (right ventricular infarction).

After initiation of vasodilators, blood pressure (both standing and sitting/supine), heart rate should be monitored. If the patient is on hydralazine and develops lupus-like symptoms, check antinuclear antibody (ANA) titers and anti-histone antibody levels. Clinicians should also check renal function values after 2 to 3 weeks after initiation of ACE Inhibitors and ARBs. Signs/symptoms of pericardial effusion should require monitoring while patients are on minoxidil.

ACE Inhibitors: There are few documented cases of ACE inhibitor overdose.[14] One case report stated that treating a patient who overdosed on lisinopril with hemodialysis worked.[15] In general, supportive care should be established in every case (IV fluids, vasopressors in case of severe hypotension).

ARBs: Very few cases of ARB overdoses have been reported.[16] Treating overdose of this medication like any other drug intoxication is recommended.

Calcium Channel Blocker: There is not much evidence on reversing the toxicity of CCBs. One study showed that high-dose insulin and life support were most effective in reversing toxicity.[17]

Nitroprusside: Sodium thiosulfate is indicated in the patient who has cyanide toxicity. It provides sulfur, which converts cyanide into thiocyanate and prevents further adverse effects.

Hydralazine, Nitrates: Very few reported cases of overdose exist to date. Recommendations are to treat these overdoses like any other drug overdose.

Beta-Blockers: Glucagon, sodium bicarbonate, and or magnesium may be used.

Clinicians need to educate their patients about the use of vasodilators. As described above, many adverse side effects exist with vasodilator treatment. It is the healthcare provider's responsibility to make sure the patient understands the importance of taking their vasodilator medication as prescribed. Undertreatment and/or non-compliance can cause severe hypertension, and this can lead to catastrophic events such as stroke, hypertensive emergency, aortic dissection, and many other preventable diseases. Also, it is crucial to educate patients regarding healthy lifestyle habits and dietary modifications. Regular exercise, a healthy and well-balanced diet, and healthy lifestyle habits (such as avoidance of smoking, excessive drinking, or using recreational drugs) can all help a patient's longevity. Nursing will often administer these drugs and need to be familiar with monitoring treatment progress as well as checking on adverse events, reporting any concerns to the clinician. Pharmacists, particularly board-certified cardiology pharmacists, can assist the clinician in agent selection as well as dosing, medication reconciliation, and patient education. These types of interprofessional team actions will improve outcomes with vasodilator therapy. [Level 5] 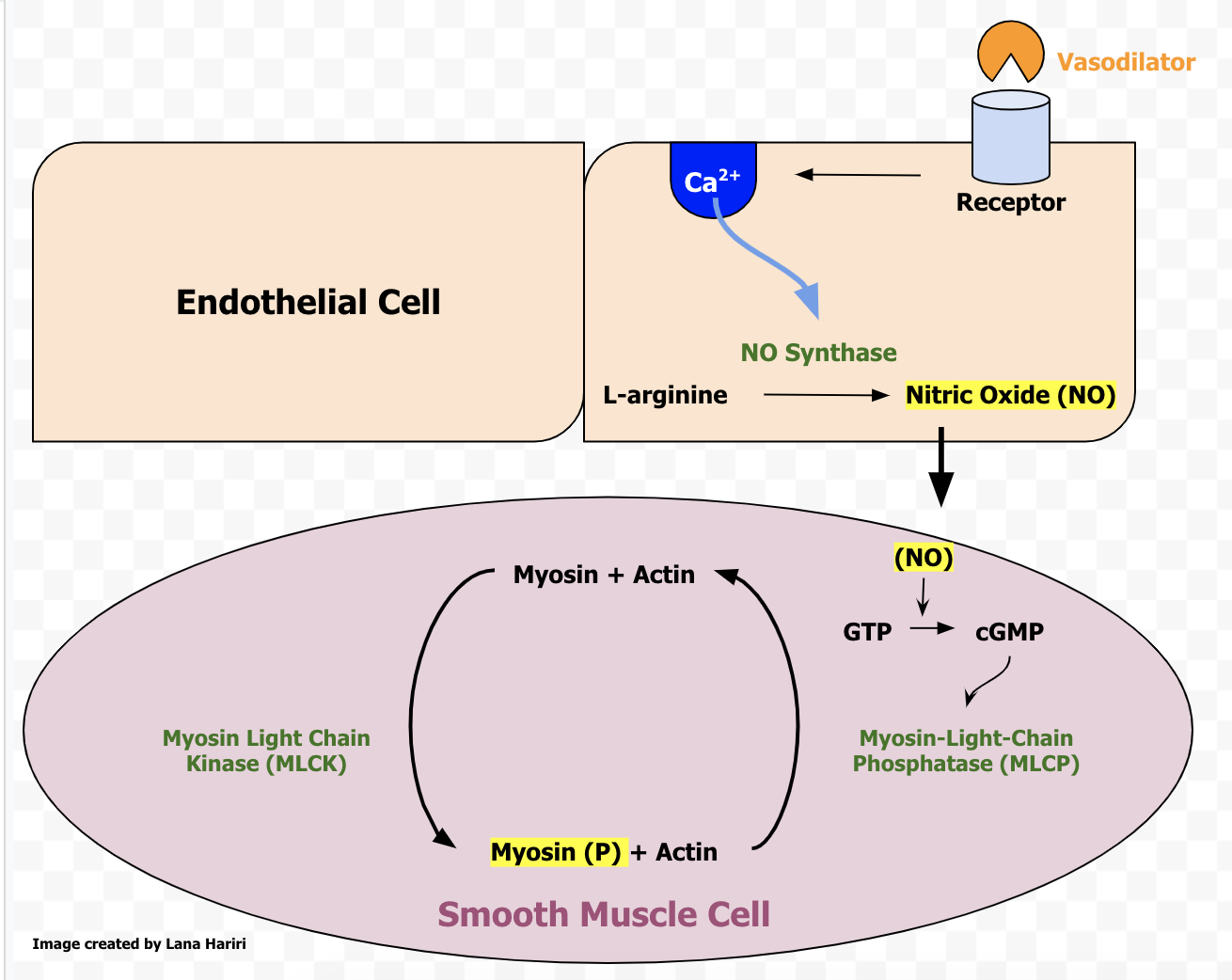