Weber syndrome is a midbrain stroke characterized by crossed hemiplegia along with oculomotor nerve deficits. This activity reviews the etiology and the salient neurological findings in the patient with Weber syndrome.

Weber's syndrome was described first by the German-born English physician Hermann Weber in a 52-year-old gentleman who had developed left-sided third nerve palsy with right-sided hemiplegia caused by an acute bleed in the left cerebral peduncle.[1]

Weber syndrome, classically described as a midbrain stroke syndrome and superior alternating hemiplegia, involves oculomotor fascicles in the interpeduncular cisterns and cerebral peduncle, thereby causing ipsilateral third nerve palsy with contralateral hemiparesis. It most commonly results from the occlusion of a branch of the posterior cerebral artery.

The nerve fascicles then travel forward and lateral through the red nucleus and converge at the interpeduncular fossa before exiting the midbrain. As the nucleus and fascicles are spread over a large area of the midbrain, lesions in the midbrain can present with either partial or complete third nerve palsy. The lesions in lower midbrain affect the extraocular muscles but spare the pupils, while lesions affecting both upper and middle parts of the midbrain are associated with pupillary dilatation.[2]

A lesion in the ventromedial portion of midbrain leads to Weber syndrome. The midbrain receives its blood supply from the paramedian mesencephalic branches (basilar), peduncular perforating branches (posterior cerebral artery) as well as from the superior cerebellar artery, and the choroidal arteries.[3]

Isolated infarctions of the paramedian mesencephalic and the peduncular perforating branches are the most common cause of Weber syndrome.[4] Less common etiologies include hemorrhage, aneurysms, tumors, and demyelinating diseases. [4]

Antecedent history of hypertension, diabetes, hypercholesterolemia is often associated with Weber syndrome, like other strokes.

In one case series, isolated midbrain infarction was seen in only 7.6% of the cases and most were associated with the concurrent infraction in other vascular territories of the vertebrobasilar system.[3]The causes for the midbrain infarction were categorized in the decreasing order of frequency into[3]

Patients with weber syndrome present with drooping of the eyelid, diplopia associated with contralateral partial or complete weakness of upper limb and lower limb. The presence of crossed deficits, either sensory or motor, along with occasional association with ataxia (involvement of the red nucleus) and parkinsonian rigidity (involvement of the substansia nigra) are the characteristic neurological findings in this syndrome.[4]

On neurological examination, higher mental functions are usually normal and not commonly affected in an isolated Weber syndrome. Ptosis may be present, and on opening the affected eye, the eye is mostly shifted downwards and outwards, due to the unopposed action of superior oblique and lateral rectus muscles.

Dilated unresponsive pupils may occur if both upper and middle midbrain are affected, pupils may be spared if only lower midbrain is affected by the inciting insult. Contralateral ataxia and sometimes parkinsonian type of rigidity may be seen associated with the weakness.

Khalil et al. reported the association of Weber syndrome with vertical gaze palsy owing to the involvement of the rostral interstitial nucleus of the medial longitudinal fasciculus (riMLF) in the midbrain, dorsal to the red nucleus.[5]

The fascicular arrangement of the midbrain oculomotor nerve is speculated to be a pupillary component, extraocular movement, and eyelid elevation in that rostrocaudal order.[6]

As with each case of suspected stroke, the patient should first have a thorough neurologic examination and a measure of the National Institute of Health Stroke Scale (NIHSS) score. [7] The emergent diagnosis is made by an urgent Computerised Tomography (CT) of the brain, since it is fast and more readily available in most centers. However, since there can be the propagation of the stroke to other vascular territories within the vertebrobasilar system, other additional radiological modalities such as Magnetic Resonance Imaging (MRI) along with stroke sequences, angiographic and the perfusion studies may also need to be done.

The immediate management is similar to other patients with stroke with an emphasis on the airway, breathing, and circulation along with quick and complete neurological assessment.

The patients with an isolated Weber syndrome are mostly neurologically stable. However, scenarios wherein the large infarction and there is a risk of the propagation of the disease process, thrombolytic therapy may be justified.[3] Neurosurgical management is only warranted in

Apart from these, supportive care is most important, including early mobilization, bladder bowel care, and nutritional support.

Other midbrain syndromes are Benedikt, Claude's and Nothnagel syndrome.

Benedikt syndrome, also called Paramedian midbrain syndrome, is also caused by an insult in the tegmentum of the midbrain and cerebellum. It is characterized by the presence of oculomotor nerve palsy and cerebellar ataxia including tremor and involuntary choreoathetotic movements.

Another famously described Weber syndrome is the Sturge-Weber syndrome (SWS), also called encephalotrigeminal angiomatosis, which is a neurocutaneous syndrome with angiomas involving the leptomeninges and skin of the face, typically ophthalmic (V1) and maxillary (V2) distribution areas of the trigeminal nerve. The hallmark of SWS is a facial cutaneous venous dilation, also referred to as a nevus flammeus or port-wine stain (PWS).

Yet another Weber syndrome is the Klippel-Trenaunay-Weber syndrome (KTWS), characterized by a triad of port-wine stain, varicose veins, and bony and soft tissue hypertrophy involving an extremity.

Prognosis depends on the etiology of Weber syndrome. Early detection, timely management, effective supportive therapy to prevent complications and precautionary measures to prevent recurrence of similar stroke are the most important factor determining the neurological outcome in these patients.

After recovery from the acute event, early mobilization is advised strictly to avoid secondary complications like contractures, bedsores, aspiration pneumonia, deep vein thrombosis, pulmonary embolism and secondary infections such as pneumonia and urinary tract infections. Early dysphagia screening and if any swallowing difficulty is present, Nasogastric feeding needs to be initiated. Early physiotherapy to recover motor power, prevent spasticity, and thereby improving the quality of life is of paramount importance.[8]

Passive full range-of-motion exercises for paralyzed limbs should be started as early as possible( Within 24 hours, if possible). They should be referred to a physiotherapist or dedicated stroke rehabilitation team.

The clinical presentation, rather than the location of the stroke, should determine the rehabilitation focus for brainstem stroke patients.[9]

As with any other stroke patients, other rehabilitative measures are also undertaken. Standard heparin (5000 units subcutaneous b.d.) or LMW heparin in order to prevent deep vein thrombosis and pulmonary embolism is advocated in bedridden patients.

Early bladder training with the removal of the indwelling catheters, laxatives, and stool softeners are also essential measures to be taken into considerations.

Transient ischemic attack (TIA) in the posterior circulation are easily missed. Thrombolytic therapy is also delayed in patients with these strokes with prolonged door to needle time. Moreover, there is a three-fold risk of recurrent stroke, in cases of vertebrobasilar stenosis. Therefore, it is prudent for increasing awareness of the salient early features of posterior circulation strokes in patients. These patients need to be urgently evaluated and managed for preventing life-threatening complications. These patients need to be referred early to stroke units for the probable early thrombolysis.

The time window for treatment for basilar occlusion have been extended to 24 hours since the white matter fibers forming a major component of the brainstem are more tolerant of ischemic insult. Moreover, abundant collaterals also help in minimizing neuronal death.

The use and education about the FAST acronym (face drooping, arm weakness, speech difficulty, time to call emergency services) have been supported widely.[10] Calling EMS (by dialing 9-1-1 in the United States) when a stroke is suspected must be emphasized because the use of EMS is associated with faster arrival to the emergency department (ED) and higher rates of treatment with reperfusion therapies.

A quick and detailed examination on arrival to the ED, early imaging and communication to stroke team( for thrombolysis, if feasible) is to be followed religiously.

Nursing care is extremely important in early recovery and rehabilitation of such patients, in the form of early mobilization, optimum positioning, nutritional support, assisted physiotherapy and preventions of secondary complications. 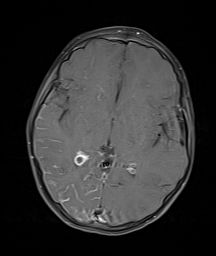 Right occipital and temporal leptomeningeal enhancement with enlarged choroid plexus in a patient with Sturge-Weber syndrome.
Contributed by Achint Singh

Saeki N,Murai H,Mine S,Yamaura A, Fascicular arrangement within the oculomotor nerve MRI analysis of a midbrain infarct. Journal of clinical neuroscience : official journal of the Neurosurgical Society of Australasia. 2000 May     [PubMed PMID: 10833630]